In states that it is legal to smoke grow eat or whatever…and the limit you to 3 to 6 (and here is the loopole) MATURE FLOWERING CANABIS PLANTS could you grow as many plants as you wanted to to produce. Copious amonts of pollen to pass around and pass and or sell or trade through out The OG world?

Are you asking if you could grow as many males as you want ?

… technically a pollen producing plant is a flowering plant at that stage, not sure how the laws of specific areas look at it, but from a plant perspective its flowering just a male.

Don’t have 12 lights in your basement, keep to yourself, don’t do dumb shit, and don’t worry about it.

Since it’s not illegal to grow, there’s no reason for po-lice to be in your house counting plants.

No smell, no sell, no tell.

No smell, no sell, no tell.

5 in Illinois…hell I’ve sat outside on my property drinking, smoking and rolling joints and when the cop drives by we wave at each other…btw, our town cop is only here on Fridays, he only works once a week. 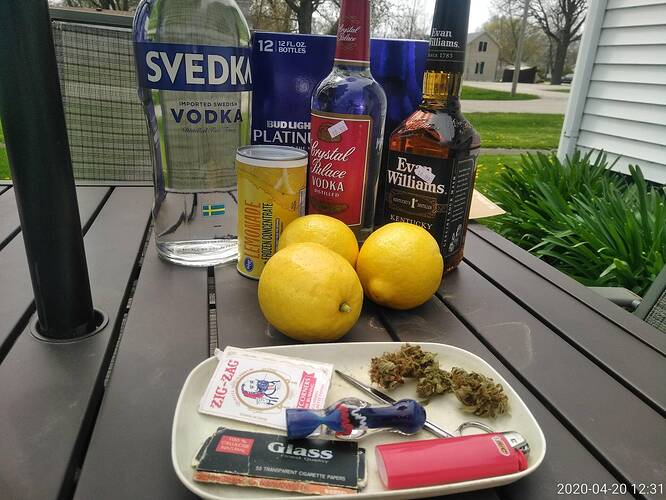 Looks like every small Central/Southern Illinois town in springtime. Flowers and grass kickin’, trees budding out.

Evan is the thinking man’s Jack.

Crystal Palace is lighter fluid. I have drank a river of their gin, which I’m pretty sure is their vodka with a nip of pinesol cleaner for flavor.

Svedka is pretty dang good though.

I have drank a river of their gin,

with Wink soda on a hot summer day

be careful it can kill

You ain’t lying. Wink/Squirt/Fresca have that bitter and sweet flavor that 100% covers the booze taste. Deadly cause it goes down like water haha.

Yes there’s limits per adult/household for recreational, but get a med card and you can have more, then you can get a caretakers license. All that is generally a lot easier and less involvement from officials than trying to get a commercial/wholesale license. In Maine, it’s 3 per adult recreational (they changed it after signing the bill

), 6 per med card, 30 per caretaker (plus the 6 for the caretaker’s personal med card). So one person could have 36 plants in bloom without getting into the recreational market red tape and inspections. It’s a tax stamp so you can sell to your patients. No longer limited to growing and keeping X amount and Turing in the surplus, or only having X number of plants per patient. It’s keep what you grow and have as many patients as you can serve with your 30 plants.
So my household, I could have 15 plants in bloom, but since I do all the work, and I don’t have much space, I won’t be getting too close to that.

I drink the Svedka vodka but theres a few townspeople who will stop by when they see my girlfriend and I partying and they prefer the cheap vodka Crystal Palace…That’s ok with me, more Svedka for me and my girlfriend drinks the Evans.

Yep, same reason I haven’t gotten one. But my friend has one and I’m growing for her too. That said, just keep it low key and don’t be selling shit out the door. It’s is legal to grow here, so just don’t be stupid about it.
Well off to cabelas, first time going into that store in nearly a year.

If I get a med card I will lose my 2nd. Amendment

That is a bullshit scare tactic that’s been used in every state that’s legalized weed. They tried it right here in OK in the run up to the vote on our medical law. Our state AG issued a legal opinion inf the newspaper about it. It is absolute BS. Your Constitutional rights can only be taken away if you are convicted on a felony criminal charge. If you’re in compliance with your state program, you aren’t a criminal.

There is some form of legalized cannabis in over 30 states. Do you really think all of those people willingly surrendered their 2nd amendment rights, and turned over all their guns to the authorities, for a medical card? No fuckin way.

Your gun rights are guaranteed to you by the US Constitution, and that document has supremacy over the laws of all 50 states. The State of Illinois can say whatever they want to, but they cannot pass a law that takes away your rights for anything short of a felony conviction.

God that shit just pisses me off.

I don’t know about professional licensing there. In OK, you can’t be denied a license, or a job, or be terminated from a job, solely on a failed marijuana drug test. Our law was passed by a ballot initiative, so those protections were built into it. The state did come back and define a category of “sensitive” jobs that were exempt from those protections, but that’s it.