I haven’t grown for the last 6 years and now with our more relaxed laws I’ve been allowed by the missus to start growing for myself again, trying a new style of growing to me as I’m going after sexy long legged sativas with what I basically already had, I’m going to try with a bare bulb vertical setup in a 4x4 foot area with a 600 watt hps bulb and will compensate some additional light via florescent tubes on the outer perimeter during flowering.

Not planning on topping the plants as I’m doing too many at once for the space but I’m hoping I can keep it under control by flowering early.

Had a bad start with the seeds and killed a couple because it was cold and I over nurtured them. Here’s the numbers for the survivors.

Broad leaf black Congo 5 X reg
5 X survived these I got these from a local supplier, spoke to him directly about their origins and I’m a bit skeptical but we will see, I only planted these because the Hawaiian snow beans passed away and I am interested to see what comes out of them.

it got the wilts after a few days but I cut it off and replanted it and now i"m starting to see slow new growth on the leaves, so we shall see if she survives

Just starting out so will keep things upto date and will hopefully find some good keeper plants. I’m keeping the destroyer seedlings in the smaller trays for a bit longer as I expect they will stretch quite a bit more than the others.

Here’s a group shot, nothing exciting going on yet, very early days 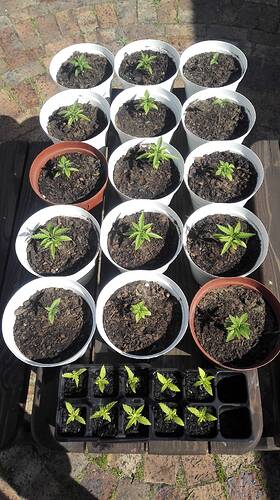 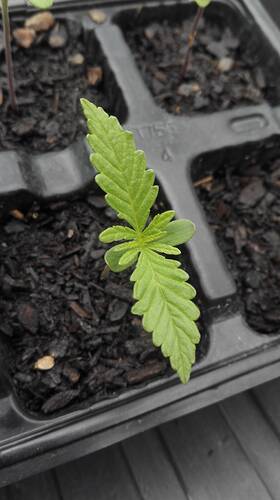 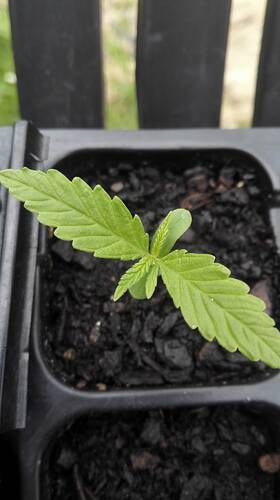 Two of the Destroyer seedlings had separated leaves on the first set of leaves, not something I’m familiar with so I will tag them separately to keep track in case it’s some sort of indicator to specific phenotypes.

Welcome back to the world of growing.Nice selection of Sativas you chose.Will tag along on your grow.I do love a sexy tasty Sativa myself.I have a 4x8 tent and 3x6 closet for flowering and have 10 strains going including a couple of Sativas.Eventually plan on turning a 3rd closet into a Sativa flower room for those long finishers.

Thanks Canuck, I’m very excited about the destroyers, I still remember always wanting to grow them but never wanted to pay the $100 price tag they had back then. A bit sad about the Hawaiian snows but I’ll do another run of them at some point, I’ve pretty much always been drawn to anything that says Hawaiian in it, definitely in search of that special plant that makes you feel like your on a beach holiday!! Dunno if I’ll find it but I’m definitely going to try😁

I need to finish my clone closet setup and an aero cloner soon.

I’ll be following along too. I have the Destroyer too, and look forward to seeing what you find.

Nothing like jumping right back in after 6 years with a challenging sativa grow!

Sativas really have a growth cycle that you can not manipulate too much. They tend to flower based on their age and maturity vs flipping to a 12/12 cycle which is normal for them. So they probably will get big. Some keep them in smaller pots, do root trimming, and lots of training which unfortunately makes them bushier.

Good luck with them! This will be fun to follow.

Hey Red
The Destroyer is a great strain.Its always been hard putting out large cash for seeds.I have 79MauwiWowieCherryBomb growing now definitely a beach strain you talk about.Vegged for 30 days and on 8th day of 12/12 will select the best male to pollinate 2 females and be keeping cuttings of all the females.This is one strain i do not want to lose.Be happy to send you some seeds when they are done.

Thanks Comacus and agreed, I spent quite a bit of time trying to get myself prepared for this as it’s territory I’m not used too, just got the tent and my first plan was to grow the more sativa stuff outside and then just do more indica dominant stuff in the tent to keep a constant supply going for myself, so I did start a batch of a variety of stuff that I got from the local breeders down here and after I popped them I actually thought what the hell am I doing growing out the varieties I don’t really want to, I did just finish those off and I am very glad that I completed the grow because I had forgotten alot of stuff it seems

and realized I don’t like using those super soils they are selling here, caused me ph problems I couldn’t correct.

I’m going to try and focus mainly on the sativa varieties but there are definitely some indi dominant strains I still want to try out and maybe keep for further breeding experiments with the sativas, going to read up on the root trimming as that’s something I’ve missed

Man this place is amazing and thank you for the offer, Cherry bomb has been something I’ve always wanted to try after reading about it for the first time, I was even considering trying to get some from Swami but those $100 price tags still scare me

would love to see how they look, do you have a journal up? still learning the ropes on OG, thank the lord the members here write good wiki’s.

Plants are looking much happier already a few days later, might have to restrict some water and light to the Thai chi as they are quite vigorous and don’t want to deal with height issues if I can help avoid them, these are on the left, the three purple Thai are catching up a bit already, fat first leaves, so let’s see how sativa they will turn out but so far they are uniform, so I’m suspecting an F1 hybrid which is not what I want with what’s supposed to be an IBL of sorts, these are the 3 in the white pots on the right, the 2 Hawaiiana seeds are completely different one more indica and one more sativa top right in the brown pots, looking forward to what comes out of all of them though. 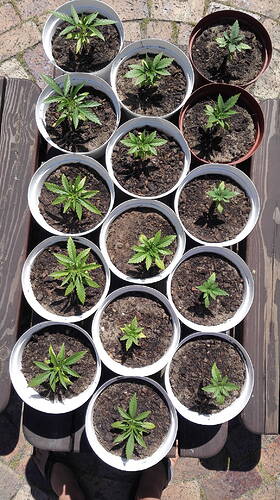 Another destroyer has caught my eye, very red stem extending into the leaf veins with some magenta on the fringes of the leaves others have the normal half red and green stems, still early days but marked it off to be closely observed. I am hoping for some nice keeper males out of these so I’m trying hard to tell the differences as early as I can, I’ve never grown something like this before so I’ve been trying to read up as much as I can, apparently kaiki may have used a black Columbian strain but he has not confirmed this, so maybe a purple meao Thai??

I can only wish.

They just got transplanted into bigger pots as they were starting to get over watered by me and I was worried about loosing any, think they have been held back enough at this point as the others are all doing well including the very tiny Hawaiian snow, it’s growing and that’s all that counts right now😅 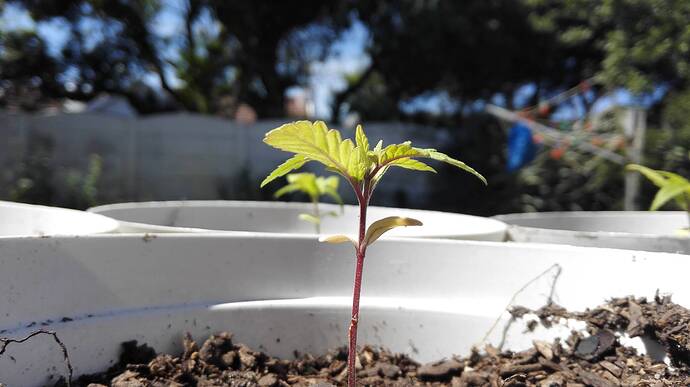 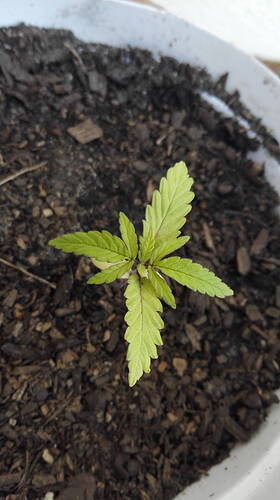 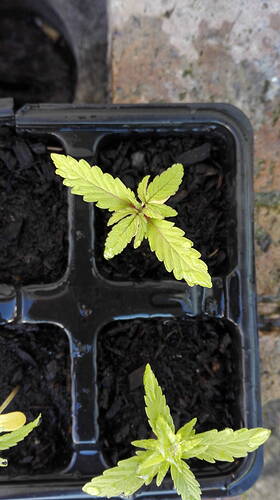 close up of the magenta one 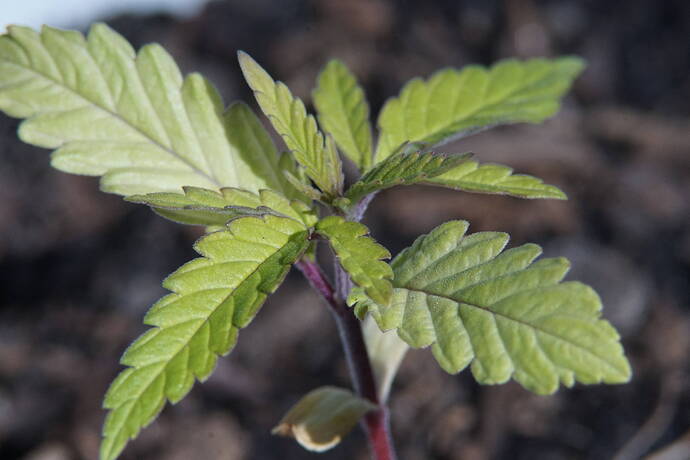 So the broadleaf Congo plants turned out to be a auto flowering variety, a bit sad but not surprised. The first grow I finished now half of them also turned out to be autoflowering or Hermies, all where from small south African producers and some smell really good but they have no potency or legs to them. The Congo seeds sounded like bullshit and so far have turned out to be just that, I’ve got two females that I’ll let finish flowering but this opens up some extra space for me to start some more seeds.

I’m thinking maybe the banana sativa seeds I have, need to choose quickly.