i’m curious to see how this turns out. i have a pack of Harlequin BX from bodhi, so (harlequin x good medicine). i tossed one outside a few years ago, and even without topping or training of any kind it turned into a large globe-shaped bush.

Let me pass all those thanks to
@bodhi
@torontoke
@lemonadejoe

Good Medicine at day 29v, seemed happy about the transplant 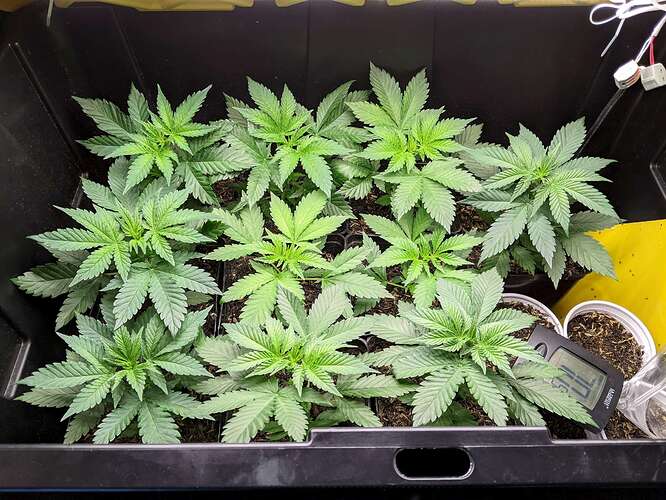 And day 36v starting to differentiate a bit. 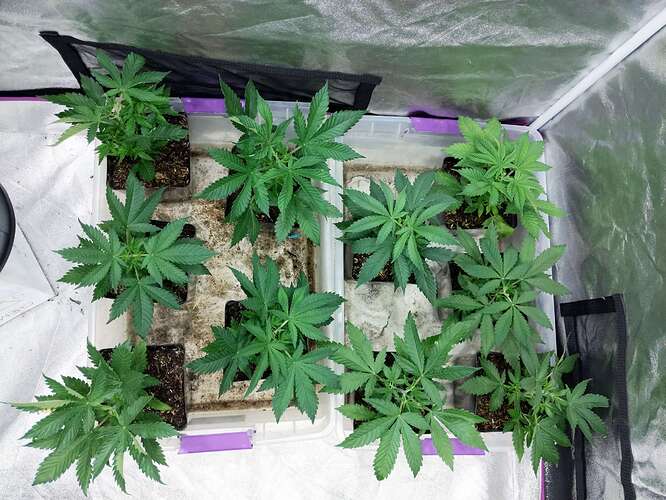 One has some leaf twist, but I think it will grow out of it. Another looks very pale but is otherwise OK. The rest are doing great and drinking like fish. They’re super thirsty. 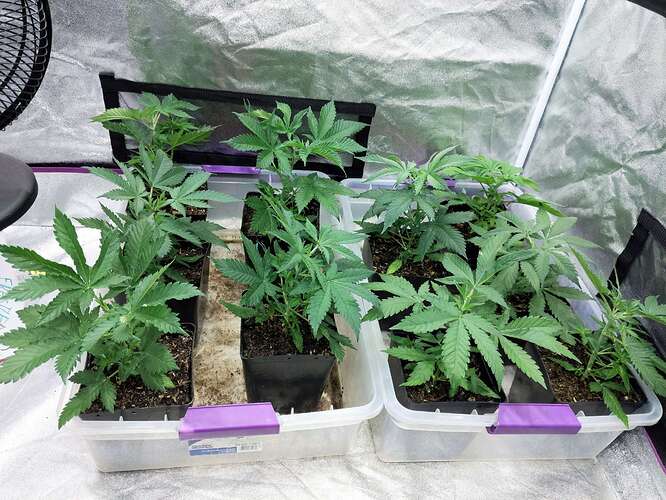 Thank you for your work on this project!

Not sure how I missed this thread but things already look like they’re off to a great start!

I’m out of likes but I’ll come back through later. Thanks for putting in more hard work for the community

I’d love to run some of them outdoor too! How was the smoke? My HI buddy Riki sent a few F2 from that Bx that I hope to chuck to the GM. CBD love nest! 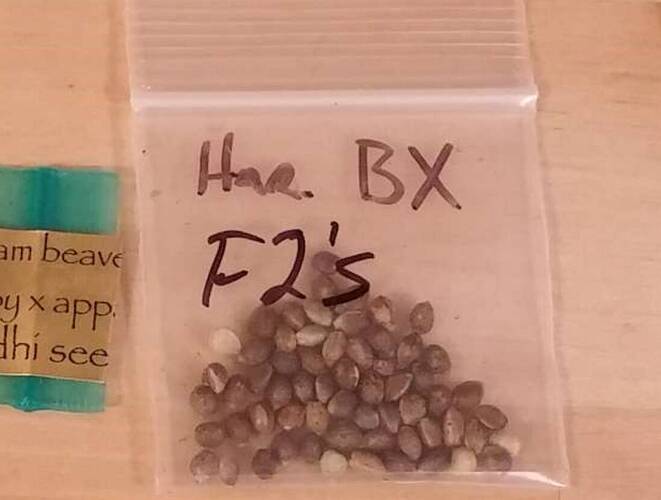 been looking at cbd rich to see if that’s the trick.

Yeah man, my gf is the same way about some strains. Hope the cbd tames her pain.

I’m excited by how many of these I’ve never seen before. I hope he will offer them as b1g1+cbd freebies during a 2021 love and healing promo. (I was hoping for something like that for Valentine’s Day) We need some reconcilliation after the last few years of sickness at the top. Maybe 420?

I have a pack i could chop in like half or 3/4 of if that interests you?

More of that Overgrow spirit! Thank you - that’s super kind and generous of you! Please keep them and make F2 and pay it forward!

Same for me when it comes with THC. A good 2:1 really helps. I’m gonna share the good meds with my gf’s dad who’s a luthier. Tincture and flower when I run them sensi.

Thanks for putting in more hard work for the community

That’s totally awesome @nube to have such a collection of high CBD concentrated strains is definitely a blessing. Good luck with this run and we really appreciate your efforts. Thanks for work.
Ef yeah I’m signing up now!

Hey @nube, the plants are looking great! Congrats and a thousand thanks, we say to your kind effort!

I’d love to run some of them outdoor too! How was the smoke? My HI buddy Riki sent a few F2 from that Bx that I hope to chuck to the GM. CBD love nest!

@nube
If i remember correctly i only tried it once. my plan was to take notes of the experience, and instead of doing that i ended up taking very basic notes every 3-5 minutes for the whole 2 hours, lol.

Those look great @nube. Thanks for everything you do. I’ve been inquiring about some good varieties for arthritis. This seems like it may be a good one!

@nube Really nice looking plants my brother, looking forward to see how this turns out. I have arthritis in my hands and elbows, too many years of vibration from air impacts, haven’t quite firgured out my CBD/ THC ratio yet. I just know it helps tremendously , looking forward to maybe getting a chance to check that strain out

Plants look great @nube. Thank you so much for doing this. if I may, I’d love to participate. Getting old and arthritis is begining to be felt. I want to grow something useful.

The Good Medicine got to veg in their 1/2gal a long time. Here they are at day 61v: 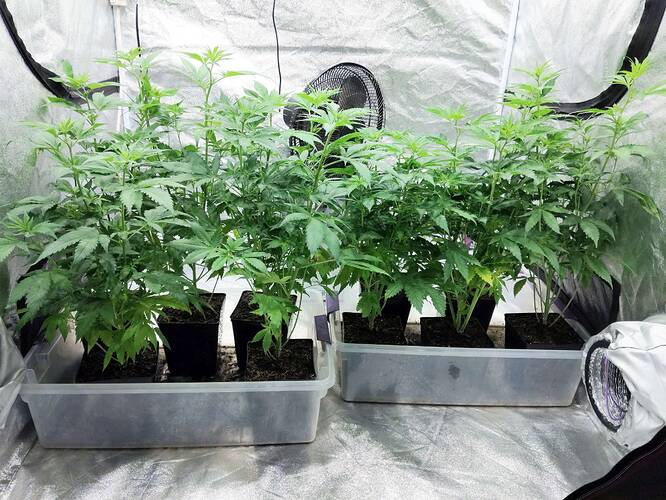 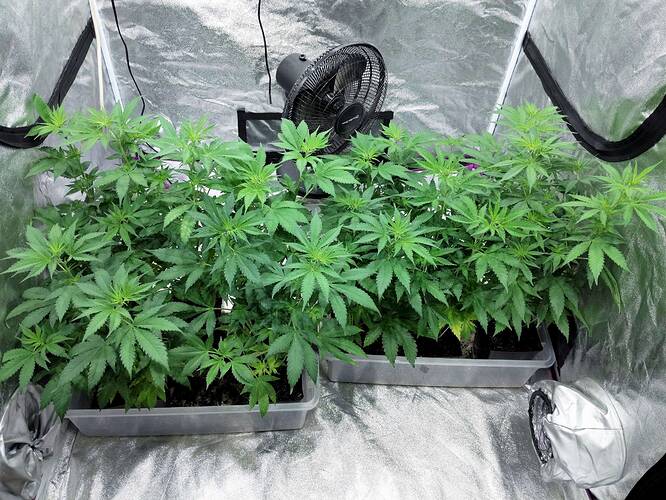 At this point they had sexed and I got 6 females and 4 males, females on the left except for 1 on the far right. The males are the shorter plants, surprisingly. All 10 smell very similar to bodhi’s Barefoot Doctor (Harlequin x Sunshine Daydream) cbd blessings I grew out a few years back - like pink cotton candy at the county fair. I guess that means the Harlequin is shining through.

Have a great weekend, folks!

I love me some cotton candy. The kid already knows to hide it if she doesn’t want me to eat it. Lol

What happened next was the result of poor planning on my part. The flower tent was already full with my 6 allowed plants, and the Good Medicine had obviously outgrown my little veg tub. I didn’t have anywhere to put them, so they basically went into hibernation for the next 7 weeks.

I put all 10 GM under a north-facing skylight in a cool (60-68F) room, and all they got was indirect light during the day. I turned the overhead light on at night to try to keep them from flowering. They got water once a week because I didn’t want their roots to be oversaturated while they weren’t growing.

That’s how they remained for about 40 days until I started noticing they were starting to get fairly yellow. They desperately need a transplant and some photons, so that’s what they got.

Here they were after 7wks in stasis. Surprisingly not terrible looking. Not great, but not terrible. We often forget these are hardy weeds. 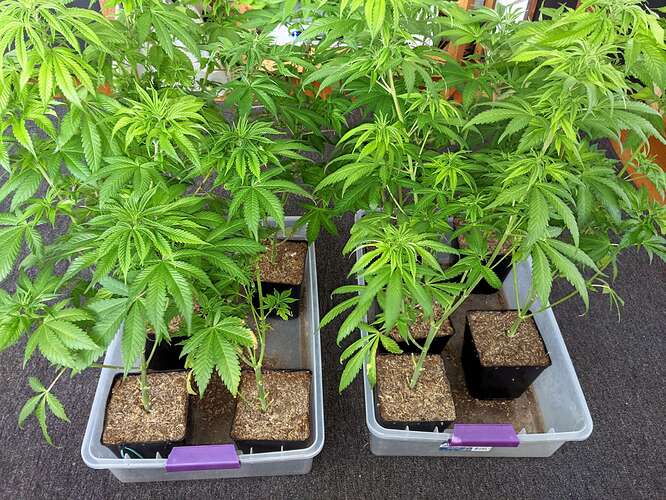 I’d taken clones from the bottom branches on all 10 a couple weeks before these pics. 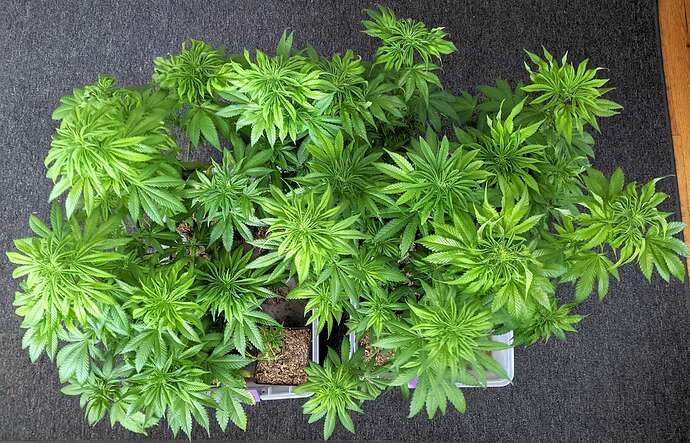 At this point I’d finally built my new flowering light and had convinced my girlfriend to let me get another tent to grow veggies and use my old COB light. So I transplanted the Good Medicine and put them the new 39"x39"x70" Mars Hydro tent (with a tomato plant). 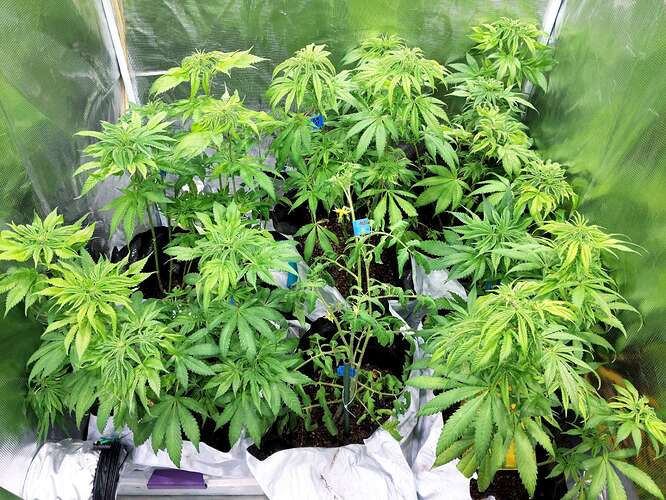 I don’t have space for a 4x4, and I only got this one because my old COB light was 36x36 and wouldn’t fit in the typical 3x3 tents. I should have known from the brand name that this tent was garbage (like all Mars Hydro products). It was retired less than 5wks after it was delivered due to major light leaks around all the seams and zippers. It literally looks like a Jack-O-Lantern at night.

Because the tent was out of the Amazon return window of 30 days, Mars Hydro absolutely refused to support their 1yr warranty without me shipping the tent back to them (which would have cost almost as much as the $140 tent itself) so, instead, it went in the trash where it belongs. Not surprisingly, that tent is no longer available on Amazon.

Sorry for the rant about a bad product, but I just wanted to put that out there so you know what was happening. The rest of the updates will be less ranty.

Great work! I love how you are making the most out of your space! And how you handled that timing issue very well!

The Good Medicine were all flipped shortly after transplant and by day 18F had really started pumping out the flowers. 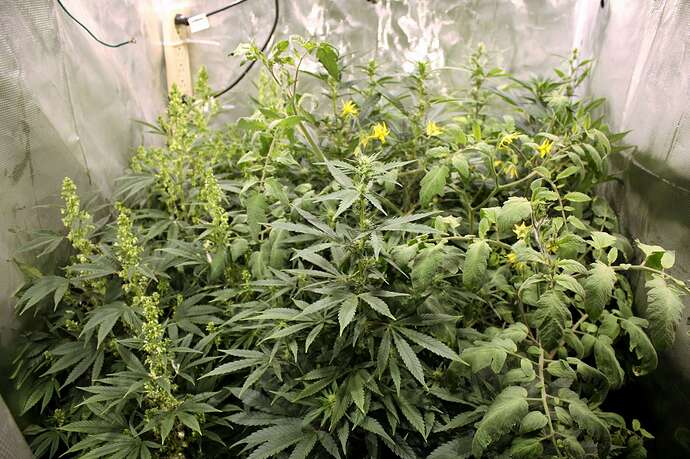 Stretch was a solid 1.5x for the shorties and 2x for the taller ones. The Mortgage Lifter tomato was loving the mix!

Here’s the females all together: 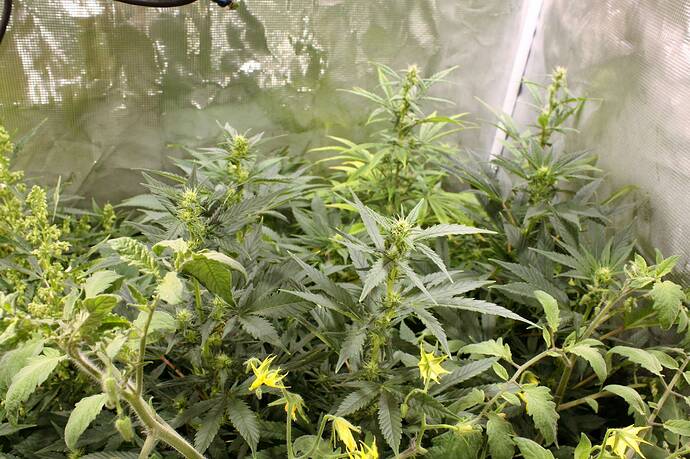 And budset on one of them, not sure which: 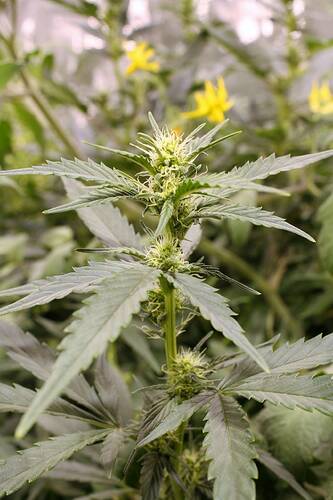 And here’s the males side: 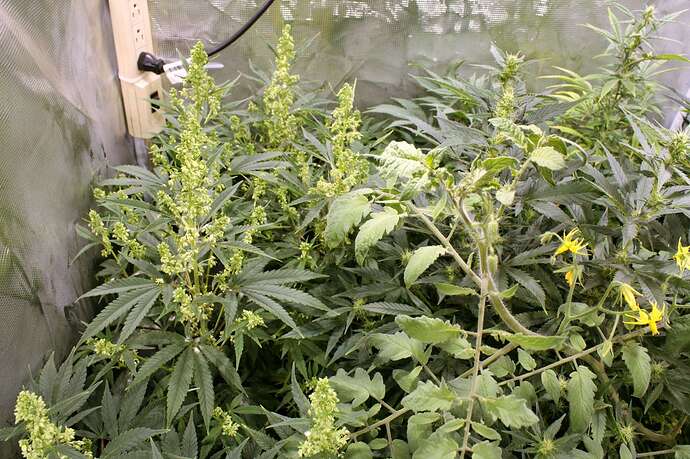 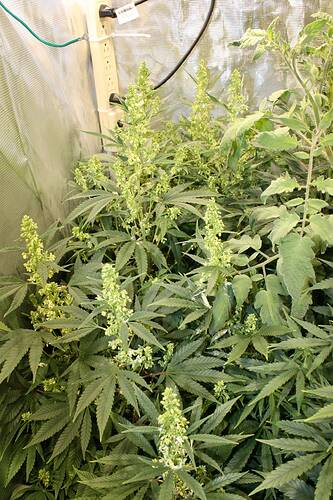 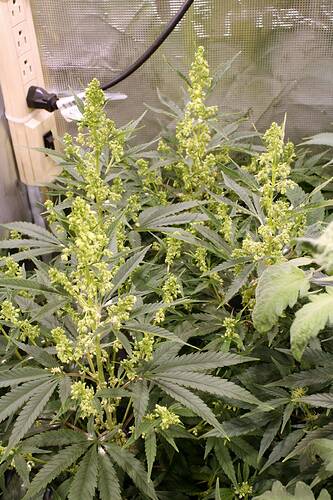 They hadn’t started actually dumping, only a few early male flowers had fallen, but I made sure to keep the fans off and the amount of ventilation very very low so there wouldn’t be any early pollination by the first guy to shoot. Turned out all but one of the guys were ready by day 21F. And, just as a matter of general preserving, they need to be at least into week 4 before starting pollination on polyhybrids to max out your viable seed yield.

How’s the flavor on the mortgage lifters? I know their suppose to grow peefect tomatoes about a pound each. But I havnt had the opportunity to taste one yet. I plan on growing at least 1 this year.

I know this is a thread about the good medicine. But I gotta ask

They have a delicious flavor that’s a great combo of sweet pure tomato flavor like you want, with a little tart. Extremely flavorful and great for sandwiches, but definitely an indoor-only variety here in CO. I didn’t get 1lb fruits off mine, but 1/2-3/4 and firm but not mealy at all. They took about 85-95 days to harvest. Better than my Cherokee Purple for slicing, and not as misshapen as my Pink Brandywines always turn out.

On the veggie garden topic, I’d hoped to have a bunch of peppers growing at the same time as this mortgage lifter, but only got a 10% germ rate on some Big Jim (Hatch green chile variety) and jalapenos seeds I traded for, and those couple that sprouted have been very slow to grow a general disappointment. I was hoping to do a seed increase so I’d have some pepper seeds to start this spring, but that’s how the cookie crumbles with unknown/rando seeds. No big deal. You get what you pay for.

Anybody got recommendation for a place to buy legit organic Hatch green chile seeds where you get more than 10 in a pack, and the same for jalapenos and sweet bell peppers?

I’ve never bought pepper seeds from them, but High Mowing seeds has organic jalapeño seeds available. And a few other hot peppers, too (no hatch, though), as well as some sweet peppers. I ordered a pack of their “pollinator seed mix” (gotta keep the bees happy) and some crimson clover last year, but didn’t plant them until a week ago (outside). Everything was up and out of the ground really quick, like within four days (and that’s above the bark mulch layer, too, in a soil mix that is definitely not like the one I grow my weed in). We actually got a huge rain storm here just a couple days after planting them, too, so they seem vigorous and hardy. I dunno. I love me some hatch peppers, though.

Re: pepper germ rates: aren’t peppers notoriously difficult to get up and growing? I had a friend (not a “grower”) who tried to grow some chile seeds (might’ve been hatch, even, but I can’t remember) and couldn’t do it. He was bitching to me that they were impossible to grow and I, being the dickhead that I am, told him that I could definitely get some sprouted. Gave me a big-ass bag of seeds, but then I never planted them haha.