is a tropical pitcher plant endemic to Sumatra, where it grows at elevations of 1800–2500 m above sea level. It has an extremely unusual pitcher morphology, having an almost vertical opening to its traps. It is critically endangered by overcollection.

what do you feed these guys…flies?? Black ones?? 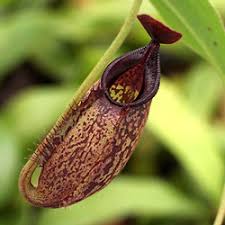 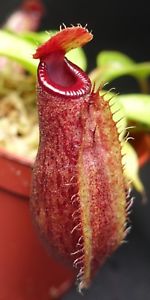 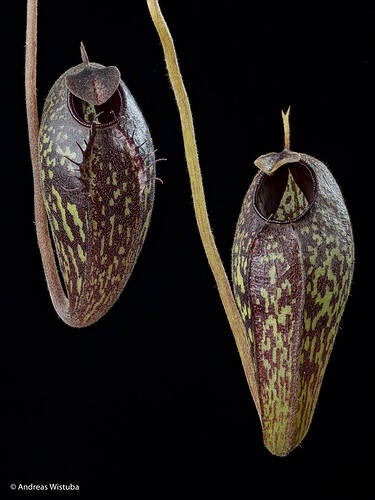 That’s some far out plants for sure!! Would you want to own one one day?

Very cool plant indeed … thanks for sharing
I have pitcher plants , they feed them selves for the most part - the fluid in the pitcher which is in layman’s terms a digestive enzyme produces an odor - that attracts insects to investigate the scent …and once inside they cant climb back out because of downward facing hairs and a waxy coating… but I always spoil mine with what ever flies I can catch with my hands inside the house …hope this helps out

Wishing I grabbed some seeds when I ordered. I just got 5 different drosera seed packs…pitchers have been catching my eye though.

We have a native pitcher plant in MA called a Jack-in-the-pulpit, that eats fungus gnats.

The males have a little hole at the bottom of the pitcher so not all of the bugs get stuck, some of them have to crawl through a tunnel, to escape drenched in pollen. When they fly inside a female Jack-in-the-pulpit there’s no hole from which to escape, so they struggle and flail as death takes hold, tossing pollen around the chamber until they gradually melt into a pool of bottled nutes.

We have those here in Ontario too. I didn’t know they did that to pollinate, very clever design!

We saw tons of weird and rare pitcher plants on cape Breton Island a few years ago. Such a beautiful place.

That would be a great companion plant in the grow room for keeping the fungus gnats down, I wonder where you can buy them.

Such a beautiful place.

It is really nice there, we usually stay at Auld Farm B&B just outside Beddeck, they have a big plant nursery there as well. Never saw any pitcher plants though.

Awesome! I saw some kinda similar but not as unique ones when I was on Borneo a couple years back. What an amazing part of the world.

In Michigan we have a jack in the pulpit. I was told it’s endangered and not to pick it when I was younger…we had picked a bouquet.