Yeah pressure cooker is on my to buy list but for now 10 quid total for 1lb of spawn in a month ish which yields 10 + dried grams sounds like an excellent yield especially when I don’t have to spend the days working on prepping like you are.

I got the syringe from cylocybe but their tubs and bags are a little pricey I got mine off eBay this time.

Well now I have some syringes I can start seeing about giving them out. Do you want to be the first to test one?

I would love to mate, feel free to pm me an email when you are ready and we can organise from there? 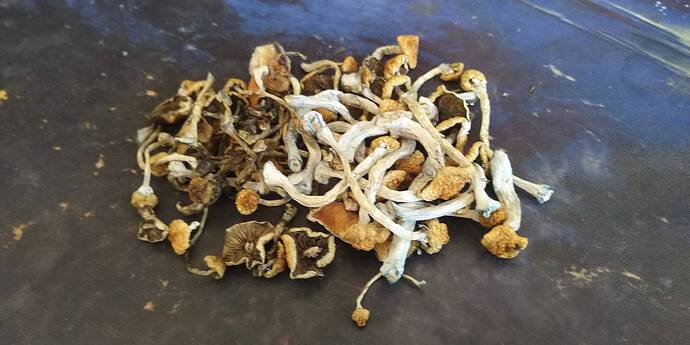 Seems like I’m always just checking when you post but eh. Love what you are doing and it spawns questions for me haha! got your email by the way, Thank you again and I’ll be watching for the postie.

Is that a single flush from your tub? If so I’d love to know a bit more detail on the size of your tubs. Mine are looking like they will be an inch or so deep in a 13 by 8 inch tub. Apologies if you have already mentioned this in previous posts, memory is short and reading back over things every time isn’t my forte.

No worries! I like questions, it provokes conversation and adds to the wealth of knowledge of the internet

This was 2 flushes. Had one big flush that I picked over a couple days, then I soaked the substrate in another tub for about 6 hours and then put back into original tub, then harvested another load over a couple days adding to about 14g dry total. This grow was made with 7 140ml BRF jars with about a 1:1 ratio with coco for the substrate 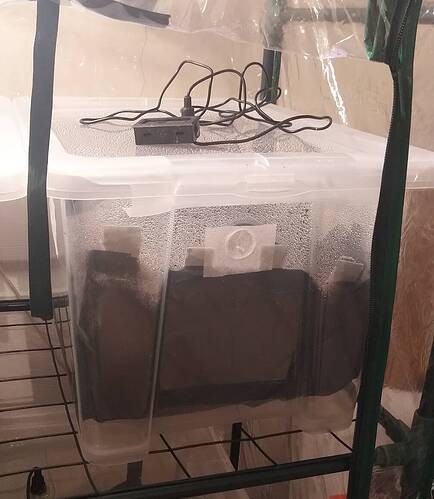 These are the tubs I use, from B&Q 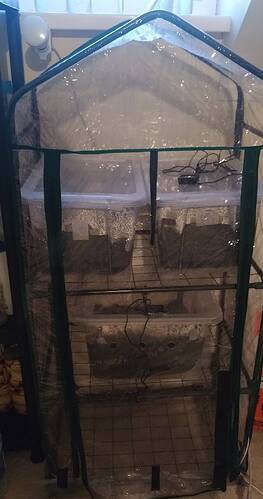 This is my lil tent 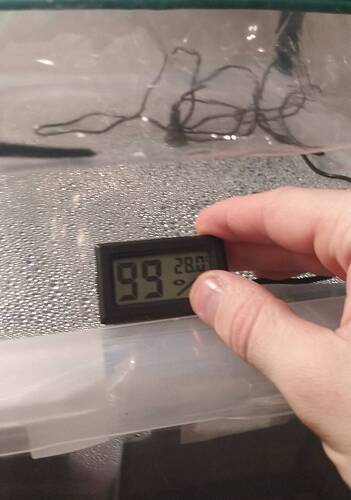 In each lid I have a little hydrometer hotglued. Super useful, I have the same ones minus the external rod for my curing jars 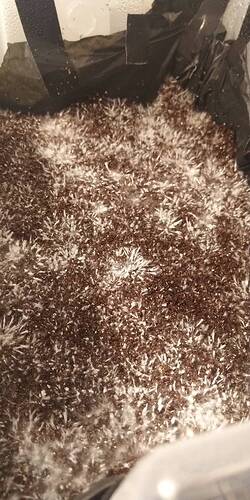 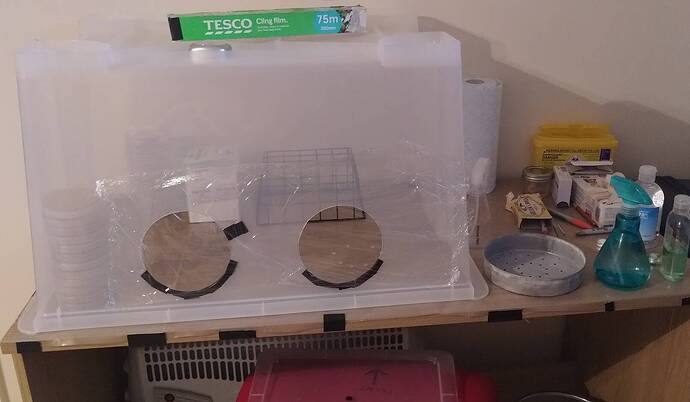 This is my setup. its a bit messy atm though

Ooh that’s right i can bulk it out with coco, was figuring id just case it in vermiculite and be done. I like your setup and doubly sealed with that tent is pretty cool.

My setup is literally a tub ontop of my grow box/shelves with the lid cracked. Temps are kept up by the grow box and I just tune the humidity by watching the condensation on the lid and walls, less means close it and drops forming that look like they could fall means crack it open more.

Now Bob, that is true ol’school!
My youngest is ‘hot to trot’ on growing 'shrooms. I keep pointing him at 7’s thread…

Yeah man, they are surprisingly hardy once fully colonised and i figure if they do it like this then why give em more

A thing to note is the shelf is above the top of the window so they are never got directly by light and any contamination is pulled immediately and outside of tubs and shelf are cleaned weekly ish on the soaking day. 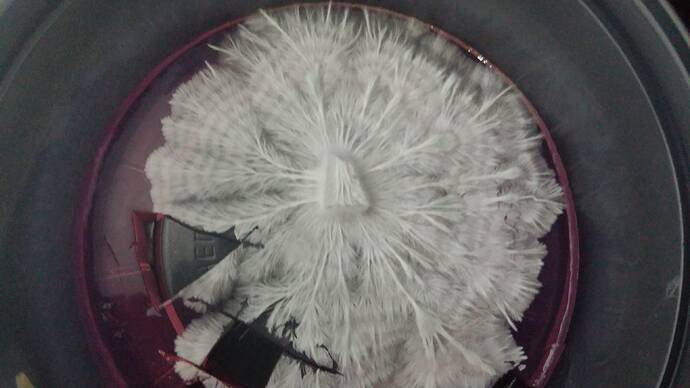 r/MushroomGrowers - [Technique] Getting Started With Agar: A Beginner's Guide

HOLY CRAP!
What a library! Thanks!!

I’ll pass those links on (they are gold)

I decided in the end not to adjust the feeding, and im glad I did because growth has exploded and them seem to have gotten over the N toxicity, which im thinking now was just transplant shock. 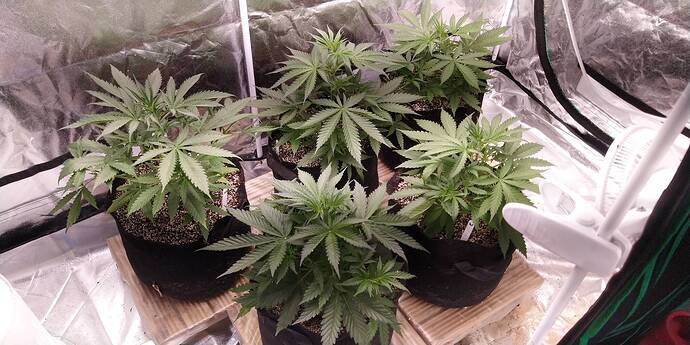 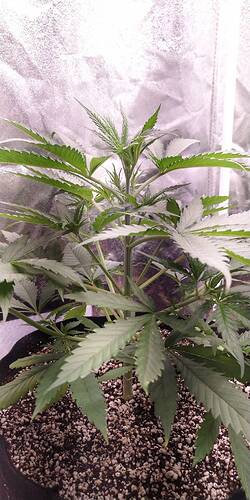 Some great node spacing coming along, you can tell they are satvias. Will veg these girls for another 2 weeks or so and then start looking at making clones. Need to find some good links to do cloning, I always get stuck on which nodes to cut and which nodes to leave to grow. I read that you shouldnt clone from a clone, but how do people keep producing them if they dont do that? surely you cant keep a mother alive for that long?

last time was a free 3ml syringe and this time… 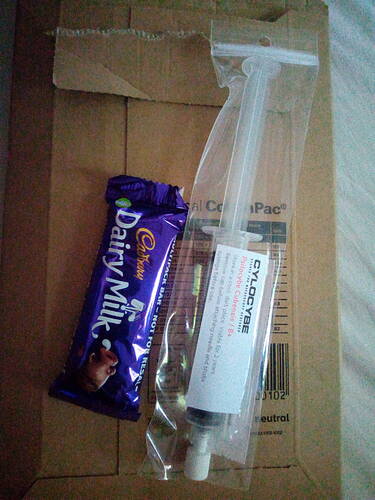 My first order I got a lil choc bar as well as a freebie, but not in the second one. 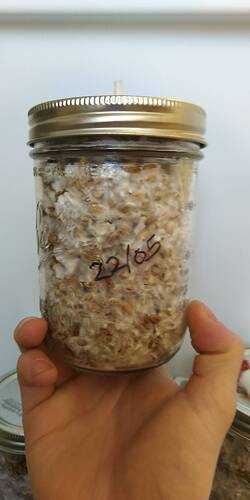 All plants are growing nicely. No signs of deficiencies or toxicities. Big ol’ fan leaves, now under the Cree cob lights (about 500w draw) in 16ltr smart pots.

Still feeding with the regular schedule at around 5.5-5.8pH and 2.0-2.3 EC. I have dropped the Rhizotonic as i’m almost out and I dont think they need it now they are pretty thicc

I topped them 2 days ago in an attempt to manage their height. As I’m looking for the best performer to create a mother from, I will want to keep them from getting too big (and they are Satvias!). I took these tops (one from each) and made an attempt to clone them. Checking them today they’ve all completely wilted which is annoying, this pretty much always happens when I try to clone and I think, to be fair, its because the stalk is too thick. So I decided to have another go with a few from the lowest node (to also make a bit more space under the plant). I took both stems from plant A and D (currently the best performers) and put them into pots with a bag over them, under my Mars Hydro 300w blurple - The first cuts were put under the Bridgelux so could also just be too powerful and they wilted? 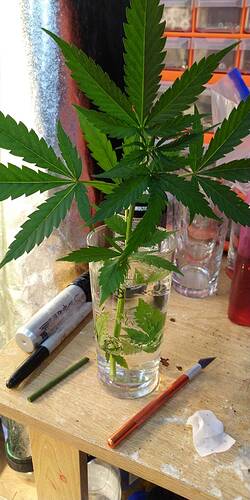 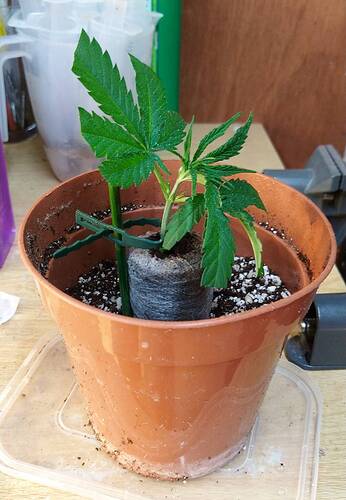 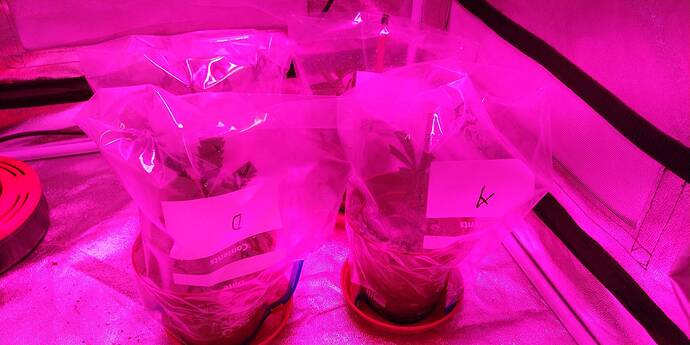 Hopefully these ones do much better, but these are just technique tests for when the mothers are a bit older and I can start taking multiple clones (once the nodes start alternating) 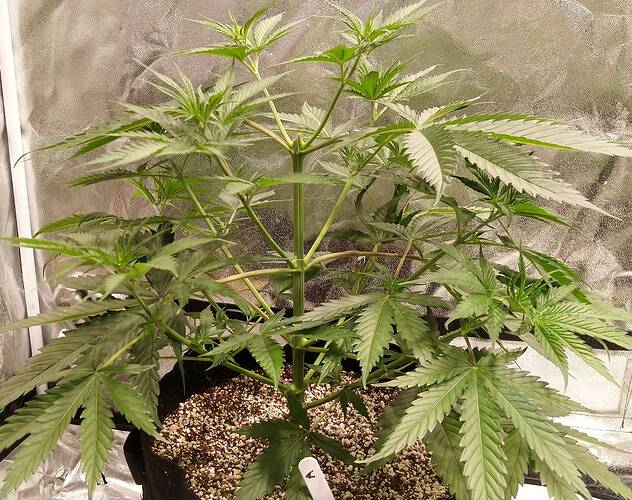 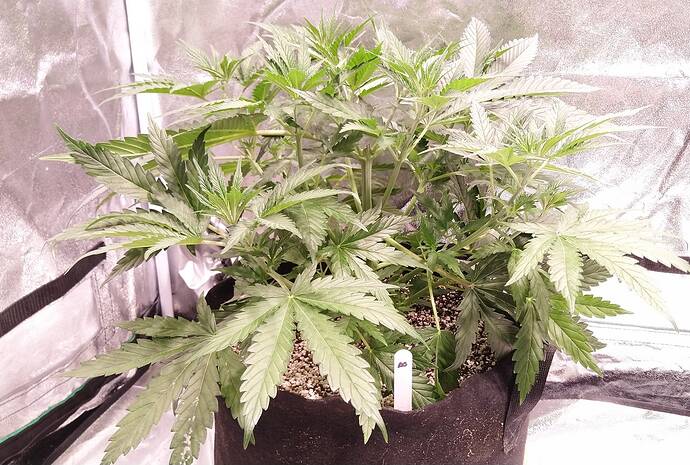 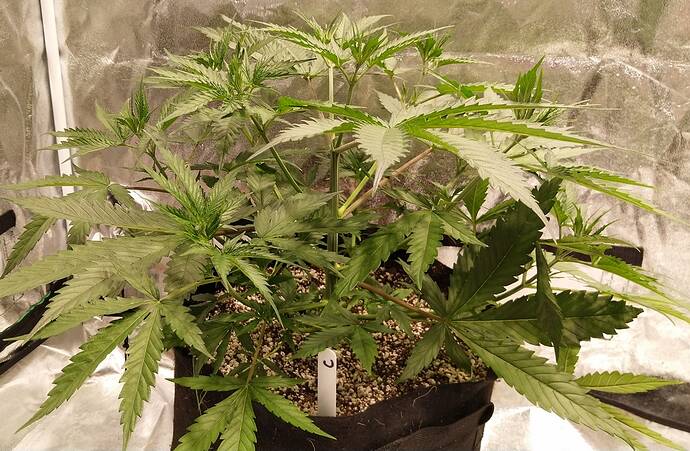 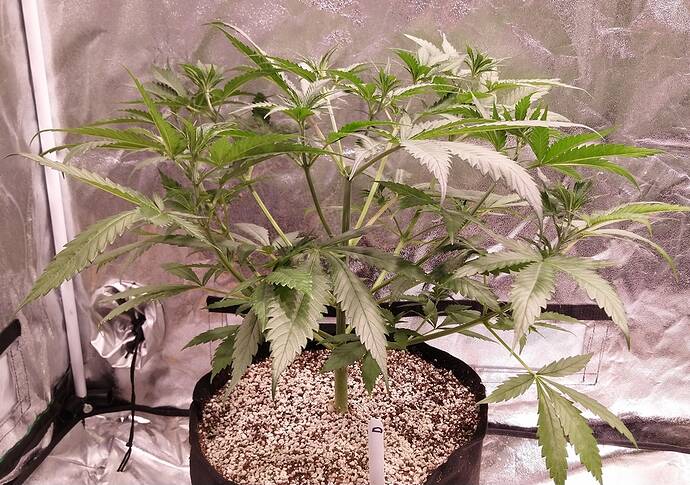 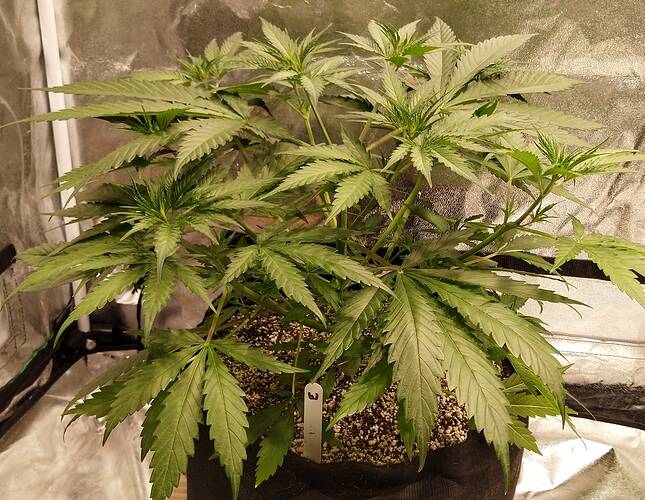 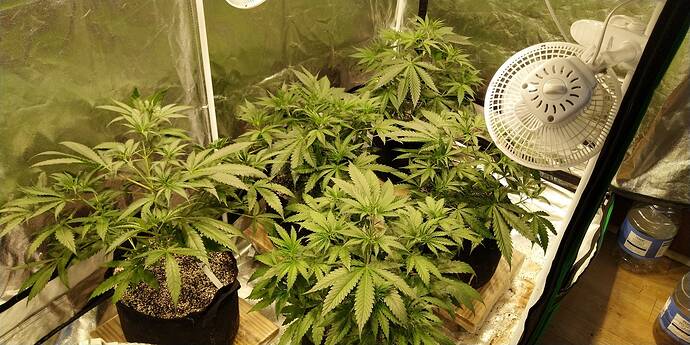 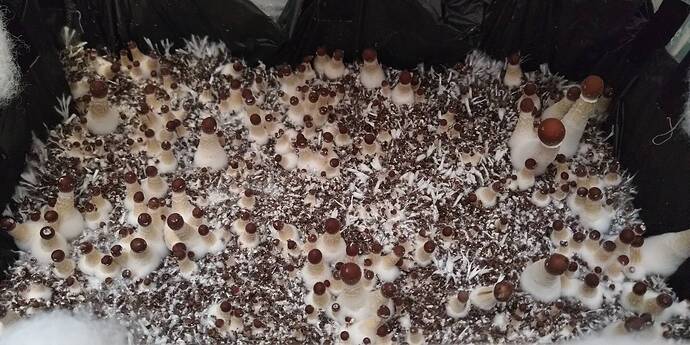 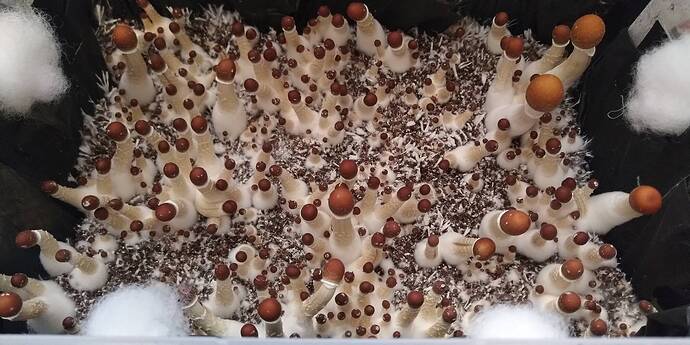 Last night vs this morning. Getting there! Tubs need more FAE, don’t think the holes ive added is enough so i’ve cracked the lid and rotated it to allow for more air exchange. Not sure if I need a small fan or something to circulate the air more.

What signs make you say you need more FAE? Just wondering cause if mine looked like that id be well happy haha

If you look closely at the bottom you’ll see some fuzzyness. If that grows bigger than just a small point where the mushroom grows out, it needs more FAE. They’re not too bad, a few of them are (look middle right - fuzz is over 50% of the stem)

I see, I get that on a few of mine too to be honest but its not harmful to my knowledge so I didn’t really bother much about it.