Just finished my 1st indoor grow. Looking to do outdoors this summer, mid-atlantic US. Probably training along a south facing fence, 1 to 4 plants.

Any recommendations for strains to try that are relatively easy and resistant to humidity issues (mildew, but rot etc).

C99 is a plant that everyone needs to grow at least once.

Agreed, there’s a reason it’s such a cult classic. Fast and frosty, takes well to topping and training, good yields, nice daytime high. Four grows in, I’ve grown it three times, and I doubt I’ll ever go more than one cycle without putting one down in some dirt. Fleur De Mal has the best ones.

It makes up for any yield from a low yielding strain you’ve got. Give her enough space and light and she’ll grow massive.

brother grimm also have bogo. so thats 2 strain down.

Brothers Grimm is not what they use to be. Rick Campanella was growing here about a year ago and I bought all of his strains and I also grew his C-99 back in the day. I was very disappointed in his new C-99. Most of his strains were mediocre at best. I have nothing against Rick he was a nice enough person but I won’t be buying anymore of his strains.

do you have some of that old c99 seeds??

I prefer the female seeds version. Yes I know it’s not the same BUT there is some fire in them if grown right. The pineapple is to die for

Nope I sure don’t……
Just the new version.

Here is a pic of a bud from the new version.: 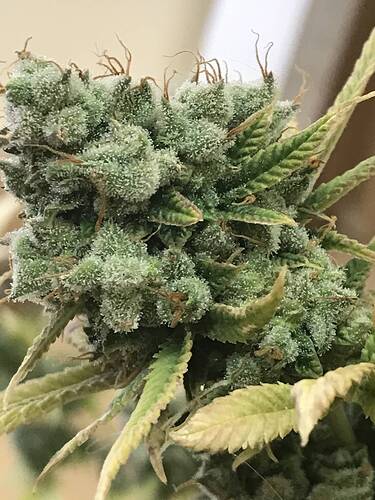 I grew a UK Cheese in Toronto this last year and it took all the bullshit like a champ until the end of October.

Not sure if it was the Cheese genes or the UK part but it was like watching a Scottish man in a kilt ontop of a rock in the middle of the ocean getting battered by wave after wave and all the time it just kept yelling into the storm “IS THAT ALL YOU GOT?! BRING IT ON! I WANT MORE PAIN! YOU CAN’T OWN ME! I OWN YOU!”

Wasn’t Mosca seeds working with the original Bros. Grimm C99 when they first started? They had a bunch of crosses and I think even a bx as I recall

just burped my c99. being cure for 2 weeks. smell kinda like cooked banana. what’s your c99 smell like??

Had a couple of different smelling phenos. The nicest ones I’ve had smelled of pineapple and grapefruit. I’ve yet to come across the rotten meat pheno

The Cinderella Story - as told by MrSoul (last updated for seedfinder.eu at the 15th of March 2017):

In 1996, I discovered a few seeds in a bud of Jack Herer I bought @ “Sensi Smile” coffeeshop in Amsterdam while there to buy seeds. I didn’t expect much when I grew them, but one of those seeds from the JH bud produced a very special female that I call “Princess”. She had devastatingly psychoactive resin and stayed short, compact and had a heavenly aroma of tropical fruit and rotten meat.

The scent given off by Princess, was unusual in the late 90’s - not at all skunky - she’s sweet and fruity. Someone passing by the flowering room MIGHT not recognize the scent as pot and mistake it for tropical flowers. When you rub the resin you can definitely smell it. The high of Princess is also more “psychedelic” or “trippy” compared to the strains like Skunk #1 that were popular. I always advised friends to smoke a LITTLE, wait 10 minutes, then think about whether or not you need any more… it’s easy to over-indulge and become paranoid.

We can assume Princess’ mother was a Jack Herer not only because Sensi Smile printed it on the package, but also because I’ve smoked verified Jack Herer since then. So Princess’ father is a totally unidentified mystery plant - his pollen somehow got in Sensi’s growroom. Princess had two sisters join her from that same bud. I called them Genius & Café Girl. There were also 3 males from those seeds which regrettably, I didn’t preserve. Genius became the mother of the Brothers Grimm Apollo lines, while Café Girl gave us Rosetta Stone, and Princess of course, created Cinderella 99.