Anyone know about hemp and low odor?/Roadside Hemp

I believe back in the 70’s and 80’s, highway and road crews would plant “Roadside Hemp” to help with soil erosion alongside The hilly terrain throughout the Midwest U.S… I believe also that it was planted on purpose in areas where illegal gorilla grows and field grows were at a higher than normal risk of being Pollinated with industrial hemp as to reduce the sinsemilla crops and reduce THC content in overall next generation grows. It is a known fact that industrial hemp is very low odor. So now I wonder if most of the cannabis seeds labeled low odor are just years of cross pollinated from hemp. Any thoughts?

Not sure of the story told I was always under the impression that most Ditch weed was propagated by birds dropping seed after a day’s foraging in the fields those doves love the pot fields . Iv recently been smoking a high CBD hemp flower though from a place cultivated down in the Colorado Springs area and it is less than 0.3% THC and smell is very aromatic . A good one to get opinions from might be @Sebring.

Last year there were quite a few Hemp fields west and NW of my location Primarily for fiber I believe but all my shit got pollinated as well as anybody else I talked to … this year their all in corn fields at the same location … must not of been profitable for them or something I hear that the CBD market is getting saturated but not sure … hereS hoping that I might have somewhat of a sinsemilla harvest this year!

the way I heard it …hemp was transported by rail and the seeds fell from the trains.

If something was crossed with feral hemp, you’d know it.

I really doubt they were planting hemp in the 70’s and 80’s, they were more into eradication rather than “pollinate their sinsemilla” strategies. Hell, sinsemilla technique wasn’t even developed until then. 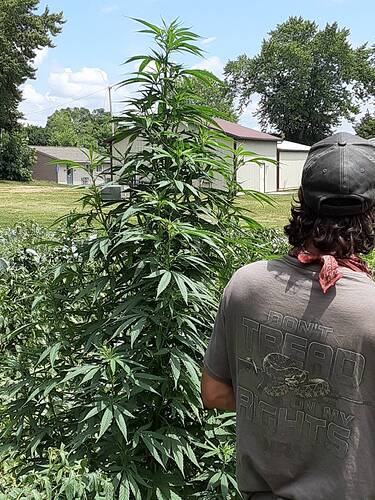 Well I can’t speak for smell but the feral hemp that grows in northern Indiana is no taller than 6ft and has small narrow leaves. And considering it grows up and down the train tracks in rural areas I’d say it’s more likely that the train story is more accurate than thinking the government, which made hemp illegal, planted it freely to prevent erosion when there’s a hundred other plants they could’ve used that wouldn’t cause them the headache hemp would.