Badger goes camping with his buddies

Damn son, you got to a rip roaring good start, I want your mom too, no not like that, havent even seen her. I mean she bought you a tent and stuff.

You have no idea, she’s the most generous lady I know. She takes food to the homeless to help them out.

Thanks for stopping in. I’m making this up as I go, but with all the OG help, it will turn out fine.

Should do well, fabulous genetics and best support on the planet.
Would be so great to have a mom that on the 4:20 bandwagon, most people have a hard time with their parents when it comes to that, at least they used to.

She had a 7’ tree in her backyard, until the wind knocked it down a bit. She’s loving this med stuff.

Edit: Don’t forget some of the coolest, most generous people.

Apparently Im a day late for the bus. @Old-Ron is a terrible influence. Im waiting for pics of the other half of the seeds you dropped.

That’s all the seedling in the pics. I originally dropped all the ones in the red pots first. Then I dropped the 3 Chem dog. Them the others

Edit: Don’t think I took any pics of the other seeds

So you really didn’t kill a bunch of seeds and hide it from us??!!

I’m down with this. You’re gonna kill it bruddah!!!

I think he did too @Joker. Most likely an old picture he had of seedlings…

As soon as we went medical I was able to talk my moms into getting with the program. I’ve found that the illegality of it is what hampered a lot of older folks views on the ganja.

My mom would have done backflips if it weren’t for the pins, screws, plates, and fibro.

My mom is funny. Shes super Christian but she did grow up in the 60s 70s. She digs tinctures and edibles and the occasional J.

All you have to read is 2 books from the Bible to read that God gave us cannabis man. Some just can’t accept that due to the governments smear campaign.

Well, this is bittersweet. My first time around on OG, my seedlings kept damping off, and yall helped me figure out what was going on. Damping off is how I found those awesome site. Guess I get to relive some of that

Since I can’t be there, I’m having her water with a hydrogen peroxide solution and pull them out of the box, to increase airflow. The show must go on!! 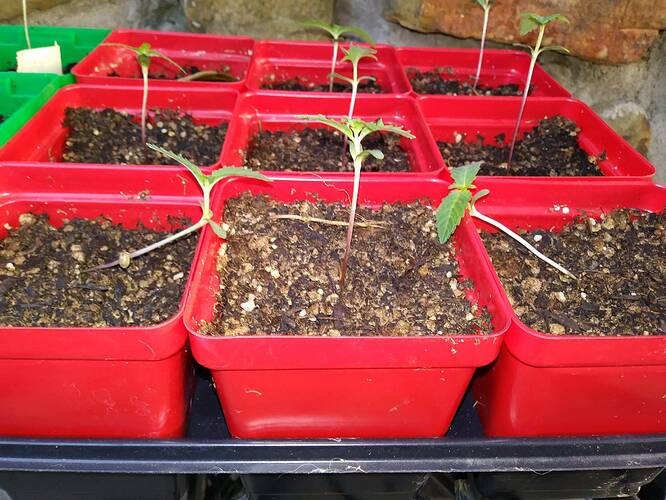 Damping off is a sad thing to see, and it can be prevented by using fresh soil, clean pots, tools etc., but once it’s reared it’s ugly head there are a few things you can do to help fight it off. Make a very strong chamomile tea using 3 teabags steeped for 20 minutes, then mist on the seedlings once it is cool. If the chamomile doesn’t work after the first day, then lightly sprinkle freshly ground cinnamon over the infected soil. Cinnamon is very potent and should only be used once per grow. Garlic spray is also good for help with damping off. Crush several garlic cloves and place into a quart of water and simmer over low heat until the garlic is softened, then cool and strain and spray on the seedlings, making sure to get all of the stems wet. Between all of that it should kill of the pythium, rhizoctonia, and fusarium soil-born fungi that is affecting your plants and causing them to damp off.

The only thing that wasn’t new was the ewc. I believe it’s hard because the spores are everywhere. I think that the best thing also, is to control the conditions so they aren’t conducive to fungus taking hold. I have a feeling that the box hurt circulation, and that they were over watered a bit. She said the pots were light, so that is why I told her to water with peroxide. I would have had her do the chamomile tea, but she had a ton of shopping to get done today. I like the cinnamon also, I think we read the same article.

I just wish it would have killed the bagseeds not the bbwc, but it is what it is. I should be past the point of worrying about it soon, I believe. Thanks for popping in buddy.

Edit: I also have some freshly grown garlic. I will remember that, because it deters bugs also. It’s hard being away.

yeah you are right, and damping off happens to the best of us, even under the best conditions - I think sometimes the seeds may just not have what it takes to survive and sprout properly. The chamomile and garlic spray tricks were taught to me by an old hippie friend who also swears by cooking his soil in the oven under low temperatures for a long period of time to kill off any nasty bugs or germs or invisible nasties when doing indoor gardening. Cinnamon was used by my grandmother in her tomato garden as a preventative measure. Good luck - I know it can be frustrating but you have the right attitude and perseverance and patience.

Years ago I got pissed and baked all my soil

I’ll tell you what, no problems after that! If it comes down to it, I will do it again.

I’m trying to avoid that route because of the benefits of having living micros in the ewc. Thanks for the advice buddy, it is appreciated. I need to get this figured out, I have some super seeds coming up

I may start to do some soaking in lbs and peroxide to be sure none of it is coming from the seeds. The seeds that came from almost done sure seed to be growing healthy and vigorously.