As we proceed to give you what you need… This is just a continuation. I’d like this to be less a daily diary and more plant focused. So I’ll try again. Hopefully you’ll ride another 4k with me.

Just to put it out. There will be no bullying if any sorts. I will be respectful and expect the same in return. I apologize if me being sarcastic really hit home with somebody in a bad way. That’s not the intention of this website and we’re all better than that That being said…

Let’s pick right back up. I couldn’t figure a name out for the thread. Anyways that’s irrelevant. Let’s have fun and keep it as classy as possible.

Just like that everything old is new again lol

Just gonna leave this over here 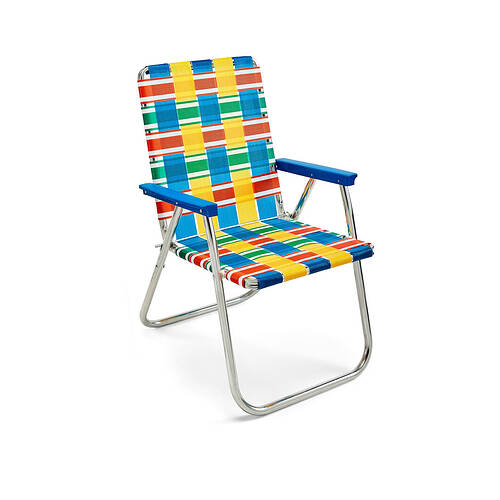 This is what happens when you trust your family member with a prize clone and they leave and don’t tell you that there’s no timer the lights have been left off for 5 days straight with no water Thank God this plant is well established let’s take a look at the fuckerey!

The 2x2 should be rocking.I believe even 4 days in the dark that I can get this back on a 12-12 cycle and take it to flower It’s showing no intersex traits at this point That’s hope we can continue. 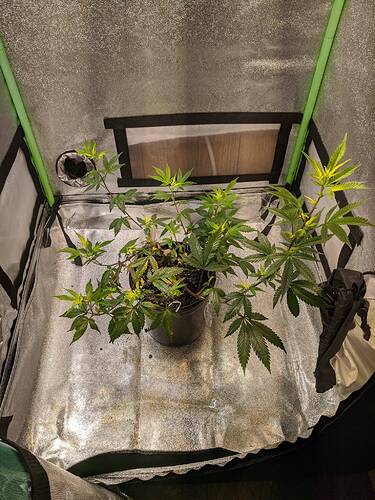 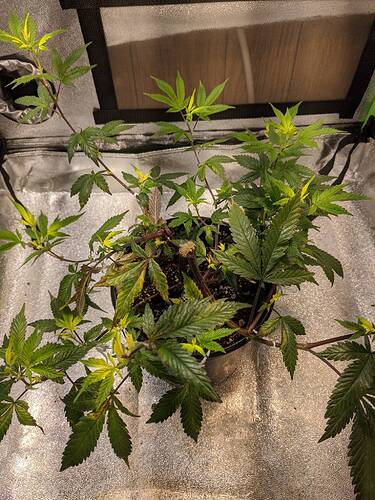 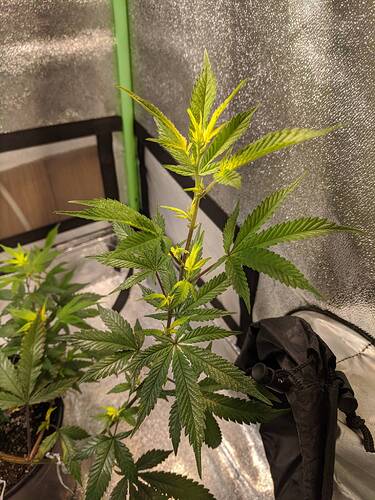 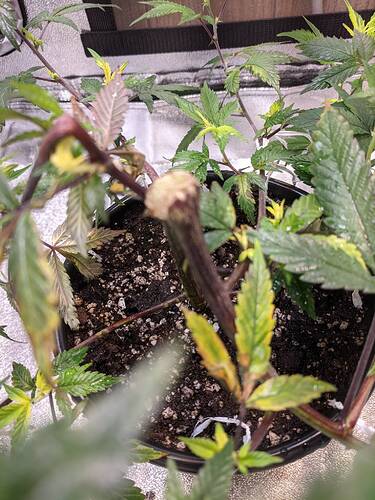 I love to try a different training techniques I just don’t know if I have too much foliage or too little? I do know that taking too much foliage during flowering can stress the plant and cause it to her hermaphrodite.

I like to clean things up before I flip just to give the plant a little bit of time to rebound and we’re back.

It’s cool you can still see a nice bit of green in that joint right there. It’s a healthy little plant, should be fine. I hope. 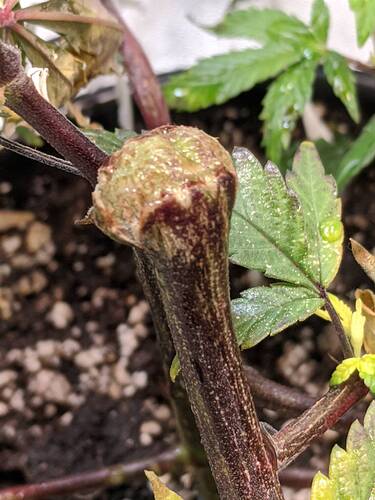 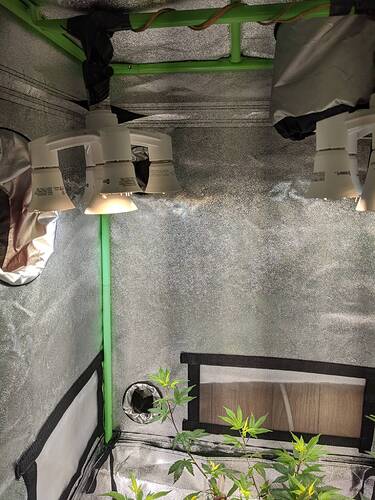 Love you guys. I’ll be working on some Christmas cards and stuff if anybody needs anything for real holler at me It’s just that time of year that I love so much. Regardless of how other people act the time of season is just what I enjoy and I hope everybody is safe and I hope to see everybody back at some point.

with that being said post away and feel free to stop by whenever you want everybody’s welcome.

She’ll bounce back no problem, I’ve had plants (garden variety berries) sent in the mail through UPS ground, took 8 days in the box, came out kinda pale like that but grew fine.
What do you mean no timer for the light?!

about time for a new thread

Off to a strong start! I think she’ll recover just fine… not so sure about your family

lurked your other thread pretty good, gonna hop in here and join the fun.

I’m settling in for the duration

Here’s 2 hermed plants. I’ll have to shroud the whole tent. I lost a Wilson Zero and my only OHxPAC. Let’s look at each.I’m sitting here knowing they’re both f***** and have a hard time killing them it is what it is it’s more room than I can’t change the fact that they went hermaphrodite.

I’m not picking balls off of them Not even doing it don’t have a f****** time or the energy to do it these days. I might as well go ahead and take these two plants out kill them and throw my f****** race fuel into a 3 gal bag asap.

Y’all have a look see. First is the OHxPAC. 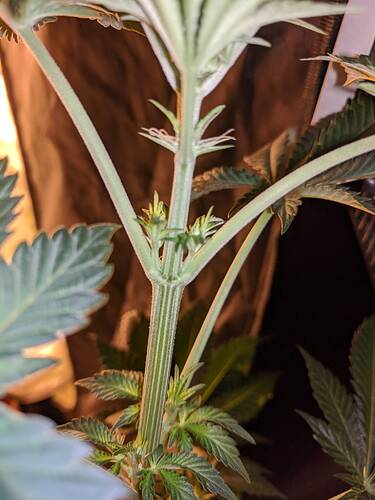 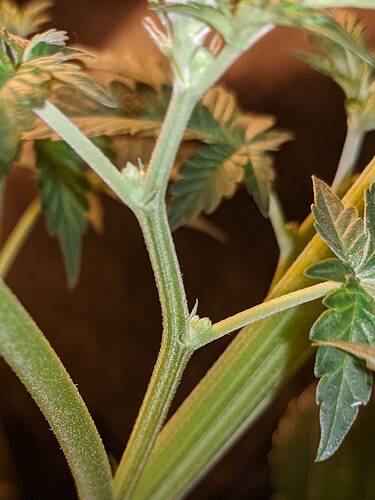 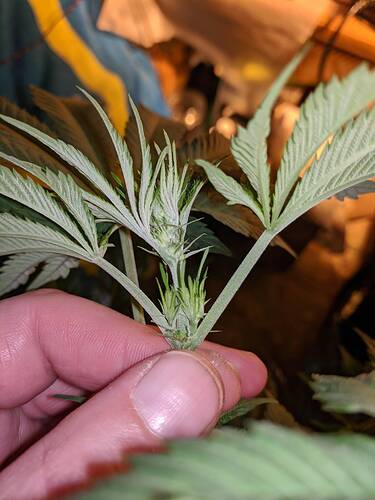 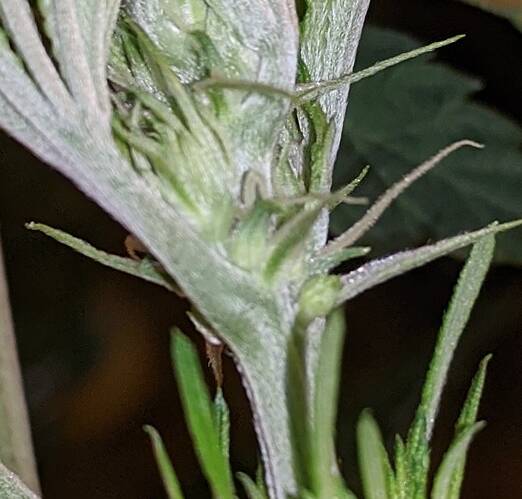 Maaaan, it’s like fckn Hermie season or something. Tappy just tossed a few, I’m about to toss all 5 of my F3 Goji’s due to herms, and now you… sadness… but yup, I’m not gonna bother with herms either…

Your a gentleman and a scholar.

. I was getting ready to take another picture of the Wilson Zero but there’s no point we’ve been doing this long enough to know what is and isn’t a hermaphrodited plant.

It just hurts It’s like your old lady went out and f*** somebody else.

Let me finish watering sonI can rest my weary noggin. Ay yay yay! I’m just gonna shroud my front half and order a nice tent for next run. These cheap seams spread with constant heat. I know better.

Right, not just tossing a plant, you’re tossing the last how many months of time, effort, love, and hope, too. Definitely gonna be a rough night in the garden tonight… trying to think positive of it, like, least this’ll give me a chance to clean up the tent a bit

Yeah. I have another Wilson female no nuts. It’s a nice plant so I’ll keep cuts (already took em). From the non Herm and spread the others out. It sucks because I’m losing weight that I should have had. It’s good in the sense that I know what I got planned I know how good it is and hopefully they make it through but I got to get a nice tent that’s got zipper flaps and everything.

I’ll be covering the tents just to be safe. We’re good. I think I have some more stuff to run. No Goji tho? Damnit Bobby…

So yeah the glasses still half full. I got the clones that I wanted. I guess that’s growing on a small scale man if it goes bad you got to chuck the whole thing but then again if you got a warehouse and it gets f***** you got a lot more s*** on your hand so. I’m going to go to sleep and be happy and not attack my f***** up tent tonight.

Pulling up a chair, pipe in hand, and along for the ride!

@HolyAngel it’s raining she he’s over here. I took clones. Let’s see how they fair. IDK man. The whole side with leaks hermed. Almost all plants. Man I start rethinking everything when you start losing numbers like this. We put so much time and work into it.

I have a hard time killing them, even when I know they’re herms. It’s like well maybe I’ll wait til tomorrow to kill it. You look at this picture and you tell me. I used to have this chick I was staying with kill them for me I couldn’t do it seriously.

What would be the best thing I can light dep that whole side of my tent with? It’s the tent seems the double seam rolled in the back of it has curled up from the heat and they don’t block some parts of the seams just a tiny bit but I guess it’s enough Man this s*** sucks bad both my Wilson zeros are gone. 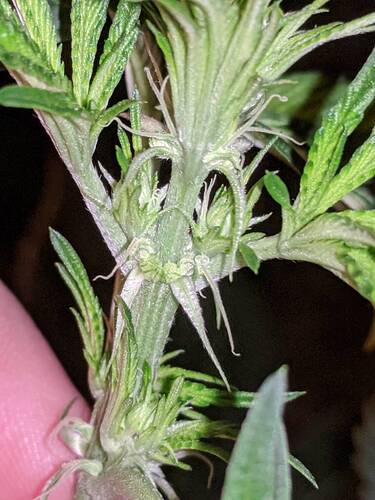 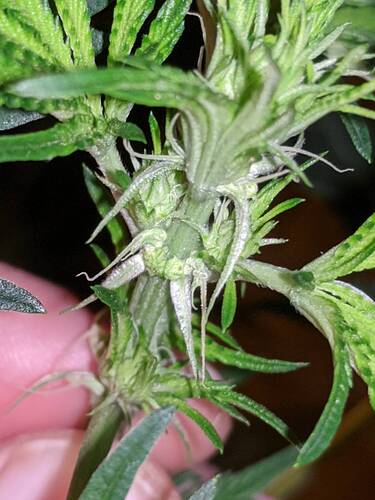 Is there any way to top it and continue it on and see if it doesn’t herm? Shhh I’m just whining. Off with there heads.

I mean, if they’re herming from light leaks than they likely wouldn’t do it normally. I’d just clone em asap and reveg if you need, fix the tent somehow in that meantime, and stick em back in flower. No sense tossing em if they only went herm because of environment issues.

I only tossed mine as I’ve ruled out environment as the cause, gotta be in the gene’s for mine. But yeah good chance yours would be fine if you get the tent fixed… Maybe some duct tape or something? A blanket or curtain or something over that side of the tent maybe? Gotta be something like that or its replace the whole damn tent

All right here we go if this is the case and with saying and what I see from a lot of people is that light leaks do not cause hermaphrodites. That means that Mongo’s breeding was f***** up and Oni’s gear (just an example). I don’t want to get into an argument because. I’ve already been arguments with people about this issue I’m just going to state some things this isn’t an argumentative comment I just need real weigh in.

What it’ll come down to is that I have a s***** environment. I’m not saying that Mongo is beans are going to hermaphrodite. I just don’t know how the f*** it’s happening in this light isn’t doing it???

As it stated light leaks do not cause hermaphrodites s***** environmental factors is more of a cause. Their argument being moonlight and other deals not complete black. I guess is what I’m getting at. well if what they’re saying is is that I can take my plant right now throw it back in veg and it will not hermaphrodite it’ll go back and re-veg? What now?

I’m at a loss for words because this s***'s on a timer there are no differentials in light as far as the times like say my time was on from 4:00 to 4:00 and I changed it from f****** 8:00 to 8:00 none of that’s happened. There is no change in environment. The temperature is a constant 80-82°. The lights are always out during dark So if a little bit of light will cause it to revedge and not herm… what the f*** is going on? My mind may pop dude.

You might have to come up here and literally pull me out of the nut ward he went nutty over a light schedule and his plants going into hermaphrodite I see my visions of weed going down the toilet big Wilson zero buds gone. Hahahaha.

I’m not going to be able to afford rides from my hack anymore because I won’t have any weed.

Oh shit. I needed that. My bong is weeping silently. Like John Lennon’s guitar 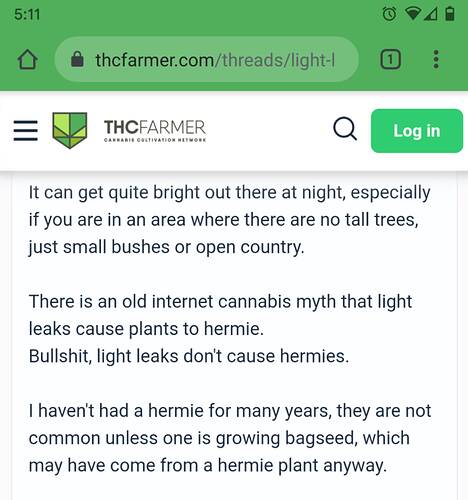