May 26th. Placed 20 Hawaiian Haze seeds I got from a bag of smoke in peat moss starters. Seeds were placed between 1 to 2 inches below the surface. Lid was placed on top, and they were put outside under a chair blocking direct sun. They were left outside during the day and brought in at night. Average day temperature was around 72. Nights were below 60 degrees.

May 29th. 16 of the 20 seeds germinated and started to have above ground growth. 4 of those had twins. Continued with outdoors during the day. Indoors at night.

June 2nd. Another seedling popped up. 17 of the 20 seeds germinated for a total of 21 plants. Continued watering 2 small does on hotter days, 1 dose on cooler days. Started to leave them out at night and placing in direct sunlight during the day. 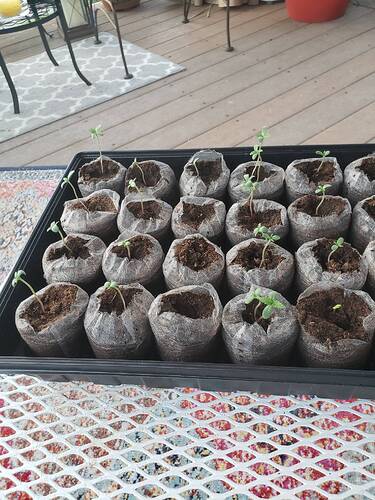 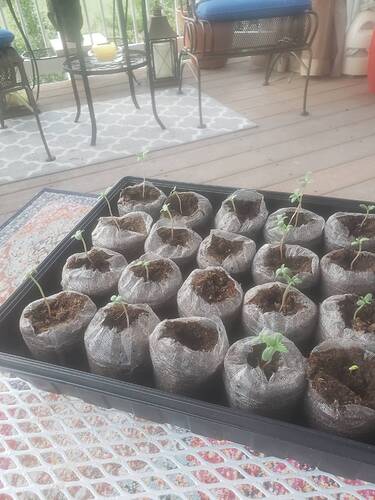 June 10th. Planted 6 plants today. 1 pair of twins were separated and placed into solo cups along with. 2 other individual plants were placed in starter pots slightly larger than solo cups. Our home-made compost soil was used for the planting. The netting was removed from around these plants before planting. Watered with regular tap water. No fertilizer or nutrients were added. Watered with tap water. 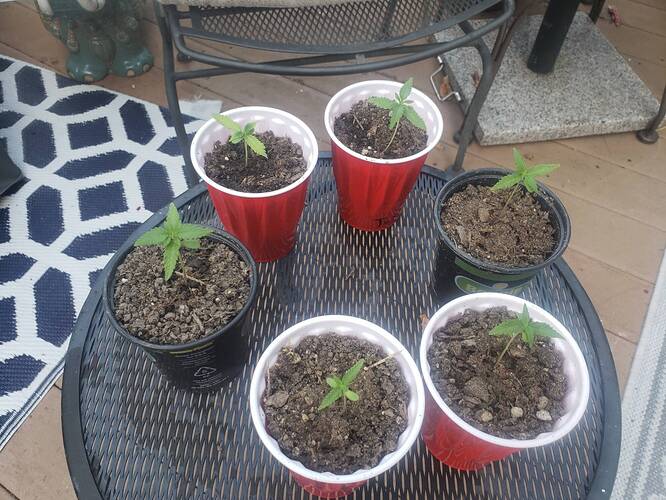 June 12th. Moved the remaining 15 plants to solo cups using Miracle Grow Performance Container Mix. The netting was left intact for 8 of the plants placed in the solo cups. 7 plants had the netting removed during planting. 6 of those were 3 sets of twins that were separated and the last one to germinate. No additional fertilizer or nutrients was added. Watered with tap water. 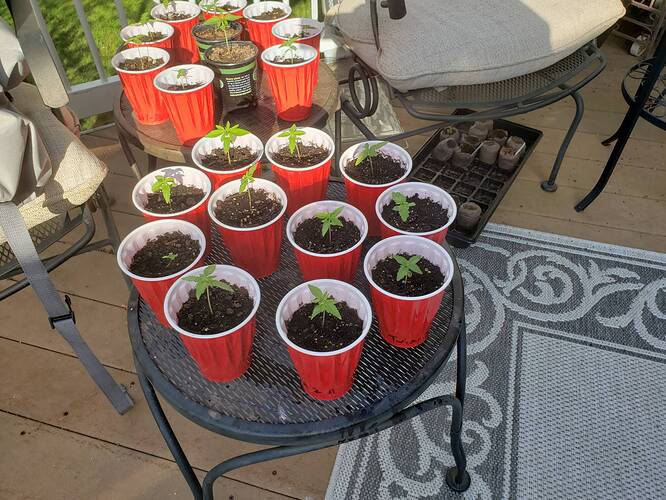 June 16th. I transferred 2 plants from solo cups to pots with a 50/50 mix of our home-made compost soil and the MG soil. The 2 plants were both planted in the solo cup with just the MG. No additional fertilizer or nutrients were added. Watered with tap water. 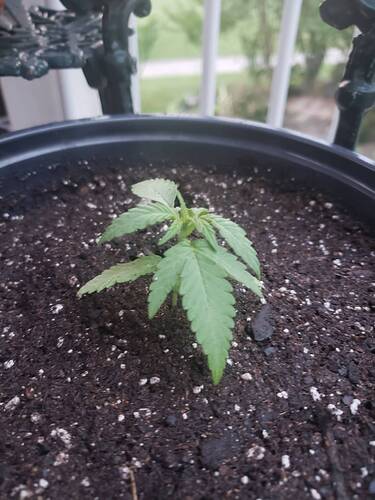 June 17th. Transferred 3 more plants today, with one being from one of the 4 sets twins. Used the 50/50 mix I made, plus added some Sta-Green Blood Meal. Also added some Superthrive mixed with spring water to all the plants. I have noticed a couple of the plants are developing good root balls already. Once the sex has been decided, I will divide into groups and try different combinations of treatment with the females. The males will be removed. Temperature was low 70’s today. Overcast with rain in early evening. 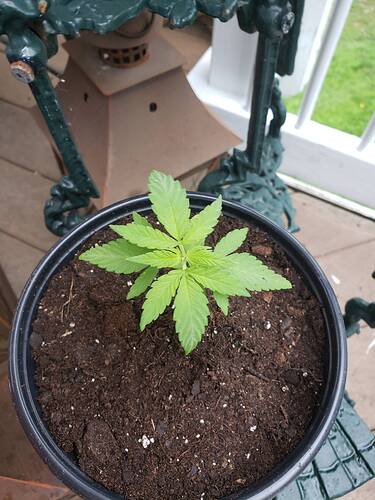 June 18th. I noticed a growth spurt on most of the plants from adding the SUPERthrive yesterday. There are 3 plants that are struggling and will be culled if they do not show significant growth soon. Got my Fox Farm in today. Transferred 5 plants today from solos cups to pots. 2 with just the Fox Farm. 1 of the twins with just the MG Performance Mix. 2 other plants in Fox Farm with Blood Meal added.
Temperature was high 60’s this morning with rain. Around 1pm, sun came out and temperature climbed to 80. 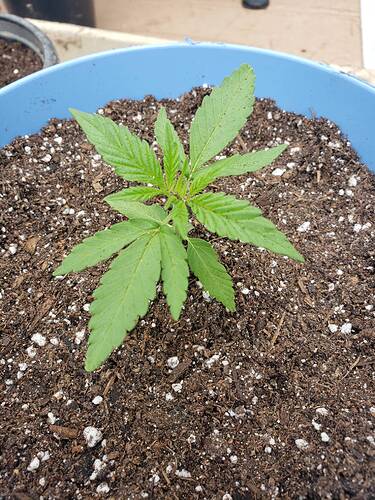 June 19th. Moved 2 more plants from the solo cups to a pot. Plant number 13 and twin number 2-A. This is the first set of twins I have moved to a larger pot. Todays plants were planted in just Fox Farm soil. Temperature today is low 80’s. Thunder stormed for about an hour this afternoon. Moved the plants from the rain, except the 2 newly potted ones. Once the sun was back out, I moved the plants back into direct sunlight. 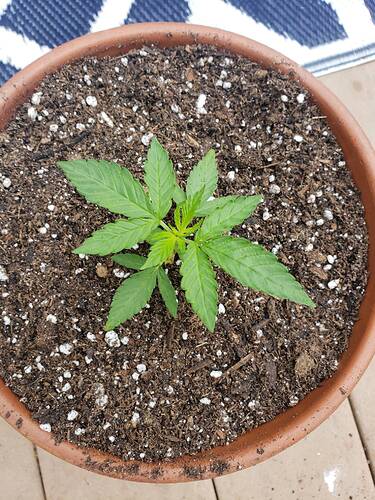 Thanks Stickjones. I have a few months. This is a trial and error grow to see what works before I try inside with seeds I will purchase. Figured it is better to mess up with something I already own.

My only suggestion is if you’re gonna grow outside use frabic pots. Other materials tend to be hot for the roots. The fabric will slow the roots to reach for air and prune themselves.

You’re doing well. Don’t worry about the heat so much unless there’s going to be a big spike. Shade cloth or a shady spot with dappled light is good too. You could check out some saponins for some help with the heat. It’s going to be 108 here on Wednesday, but I know they will get through it. I mist the area in the morning and evening and with a little breeze it cools off nicely. 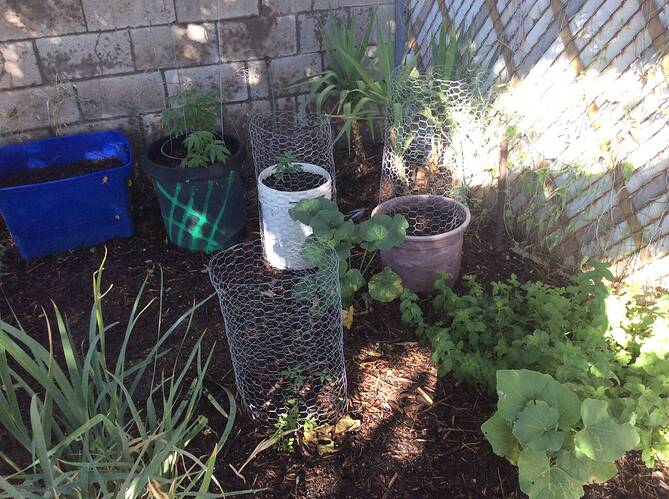 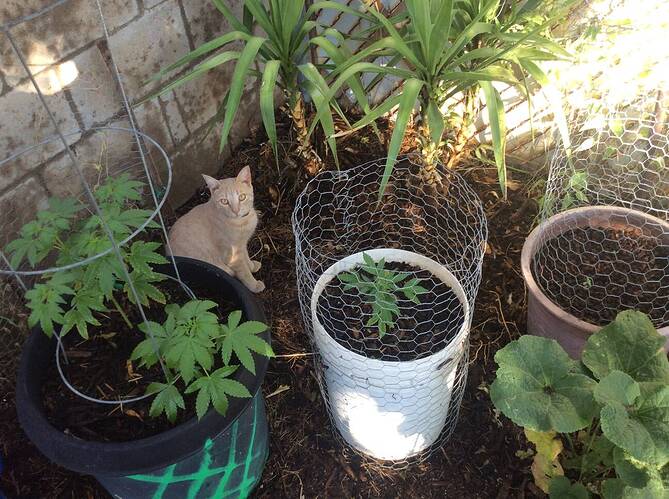 Thanks 4HundredFifty3. I planned on getting fabric pots once I find out the sex of my plants and cull the heard. I have been reading and researching about the fabric pots. Any suggestions on which are better?

Thank you. I am enjoying it, but I am definently sweating the little stuff. I am guessing a lot of first time growers probably do…I hope…lol.

Yup not alone there but be sure to check out this thread on a tried and tested technique: New and improved! LITFA by ReikoX

It’s very easy and any beginner can start on it right away!

What’s yr latitude? Climate? Looking good so far! You should get some mulch on those. Old leaves, straw, or bark mulch. If you use bark, a sprinkle of blood meal (or some other nitrogen source )is needed to avoid deficiency. Sprinkle under the mulch on the surface. Mulch keeps upper roots happy, and helps keep an even moisture content in the whole pot. It’s a game changer. I highly recommend that addition. I Wish I could remember the name of the grow bags I have been using. Third year, and no ripped handles. They get moved alot, too. There is a picture in the landrace expansion and trade thread from this morning showing my grow bags.

Also… the sun beating on clay pots will literally cook any roots on the outside. I take an old t shirt and cut it into a couple squares and cut a slit in it. Then this shirt acts as a mulch and pot cover in one. Keeps the pots cool. Fabric pots don’t need this treatment. Good call to go that route for sure. 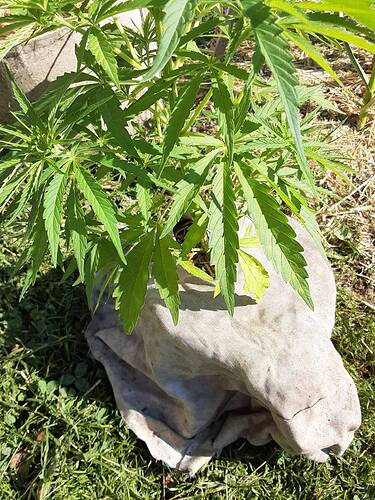 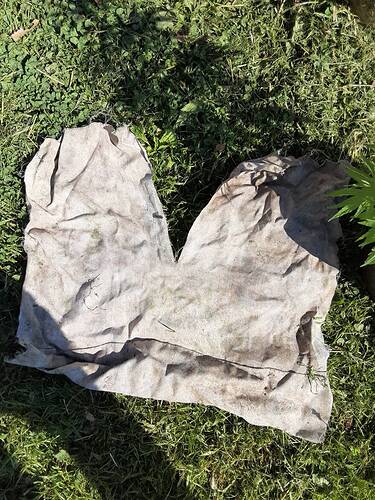 Are you able to move plants to a dark place to induce flowering now? I’ve been doing so for two weeks now. It’s quite easy when they are small. By mid August you should be able to leave them out to finish flowering naturally . I bring them in and take them out every day… Edit…yes. it’s a pain in the ass sometimes.

I have 21 Hawaiian Haze bag seed plants. Most are doing well. I have this one with twisted leaves. It is almost 3 weeks old. It has been getting the same care as other plants in the same soil MG Performance Container Mix. Is this something I should worry about, or not really an issue? Thanks in advance for the help. 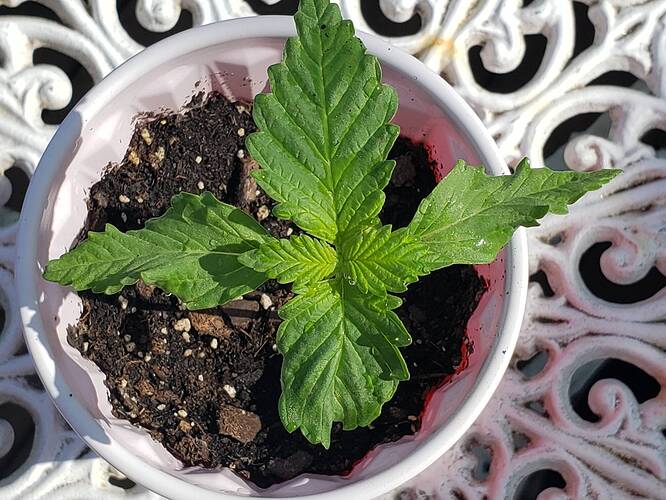 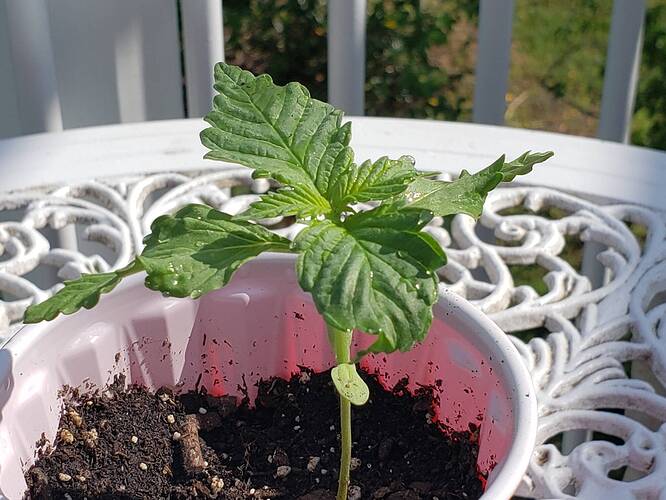 The odds are that the plant will be fine, it should grow out of its current appearance soon.

Don’t worry, and have fun.

Best of luck with your trial grow.