Just a single freebie fem seed from 2014.
Really nice stain to come back from a decade long hiatus! FFOF soil, amended before planting with various Down To Earth soil amendments, and then top dressed as she grew into it.
She’s only about 14 inches tall in her SCROG screen, in a 5 gallon smart pot.
Tons of side branching makes her a killer SCROG selection, but she will get crazy dense of I don’t pull off the non-performing suckers and branches below the screen.
More to come! 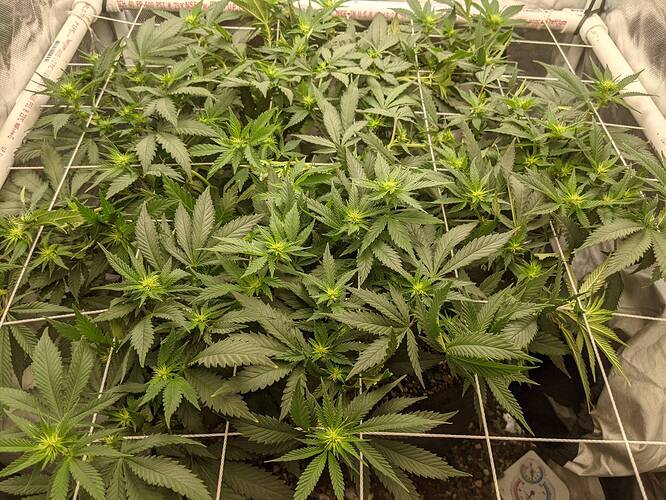 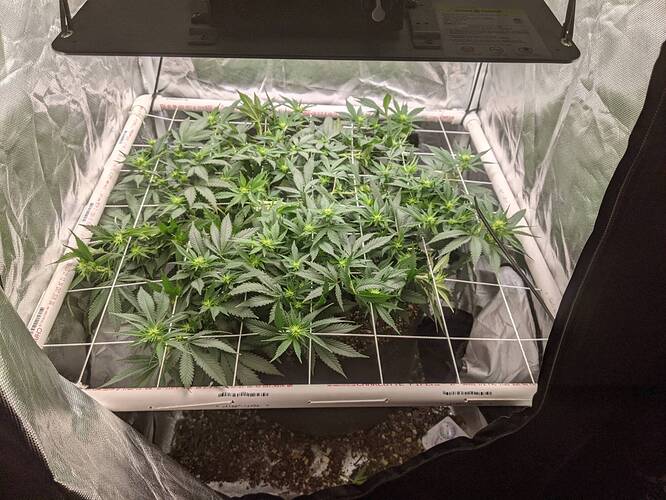 I flipped her to 12/12 when the screen was about 60% full, but she basically didn’t stretch at all, so I could have pushed out to 90% and been fine, but again, it’s my first run with this strain.
Lights are 1 SF1000 and 1 knockoff LED with similar specs. Tent is a 2x2x4.
@MoBilly @LionsNaughtyBeans both asked for a tag, so here it is!

thanks for remember me

really pretty plants my friend… and its from 2014!

i liked your strategy for the scrog… i wil do the same… put scro on the final weeks and flip when its get full!

thanks for the invite !

Yeah, I wasn’t sure how she’d do, but I gave her a quick scrub with some sandpaper, and a 24 hour soak. Put her in seed soil before she cracked, and had green above ground in 2 days!
Hoping for similar luck with my 2014 THSeeds Wreckage after this grow is complete. Then when I feel like I have my feet back under me, it’s on to some new Bodhi Gear that’s a bit fresher.
Since I have 4 or 5 Wreckage seeds, I’m gonna keep them in 1 gallon smart pots, mainline, and switch to flower after I get clones from the tops, or from expendable lower nodes.

i’m waiting more few days to make my top prunning… i wanna to get some clones from it too and flip it early to know de gender and select my madre to keep in vega just getting clones to breed and for bloom !

man, a question what i have since i ingress in the forum;: WTF is Bodhi ? its a user, its a strain ? i’m some confused about it because i read it everywhere, and english isnt my native language, so i’m a little bit confused kkkkk

Bodhi is a breeder with some top notch gear. I got turned on to him via a thread here at OG where people were listing their top 10 strains, and I kept seeing Bodhi this and Bodhi that, so I got 4 packs to try out: Lavender Jack (because I love all things Jack Herer), Strawberry Headband, Kush x Sunshine Daydream, and the new Metal Haze preservation F3’s.
Maybe another Bodhi freebie coming too!

oh man, thanks for the rich explanation !!! I get it now!

Thank you for the tag. I gotta say, she is very nice!
You gotta love a well trained plant, and she’s a tabletop!

Great job on the training too.

Thanks brother, that means a lot to me!
I’m terms of training, she did most of the work; I topped at the 3rd node, then topped those 2 growth tips, then installed the screen and let her go.
Got a single clone going in case she turns out to be something magical!

I gotta say, not too many people grow bomb seeds. I like them alot, their kush bomb was something special…

Berry bomb was one I was eyeing for outdoors, vigorous monster plants hehe
A couple years ago (decade lol?) somebody did a 2x4 scrog under a 400w and ended up with a pound of chunky berry goodness. It blew my mind… lemme find that Pic…

Very nice plant. Did you clone her?

Did you clone her?

I’ve got a single clone. Genetically, I’m not super invested in her, but with Vanilla Kush and White Rhino (I very much doubt it’s one of Shanti’s line, probably’s from Greenhouse a generation after the split)) in the mix, who knows, I might fall in love.

congratulations brò I sit here to see your growth

Just a closeup as she starts adding trichs (we’re at day 21 now, my initial post was a pic that was a few days old).
No heavy aromatics to speak of, but I’ve been told she’s pretty discrete; notes of chocolate, vanilla, and floral overtones, even when she’s deep in flower.
Honestly, this was a freebie that I never thought I’d pop, but she has been a delight to grow!
Easy easy easy from the start, thrives in a PILE of nutrient amendments, with no burning (okay, she got a couple 1 mm burns on the leaf tips in veg), short, bushy, branchy, fast growth, never got droopy EVER (I did one massive over-water, and she stalled for 48 hours, but never lost turgor pressure).
If there are beginning growers reading here, this is a great option for you.
It’s so much less stress to learn this art/science on a bean like this, instead of that seed from a $200 pack you got on limited release. For me, coming back to the tent after a decade and a half, it has been a great confidence builder that I still know wtf I’m doing. 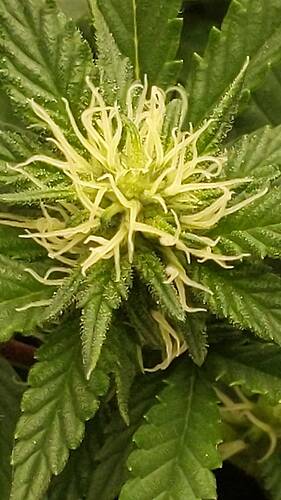 their kush bomb was something special…

Honestly, this was a freebie that I never thought I’d pop, but she has been a delight to grow!

I grew a single bubble bomb for my girl. (was an extra seed in an order to get more freebies)

light-feeding, painless to grow. great density, and plenty of potency.

P.S. why such a small container for your scrog?

P.S. why such a small container for your scrog?

I had the 2x2 tent in storage, and 5 gallons is pleeeenty to fill in a 2x2 screen. More roots=More plant, and more plant would be more problems since the tent is only 4 feet tall.

Da Bomb! is a special incredible athlete in doing all the events in style and size

their kush bomb was something special…

I bought ten kush bombs regs, of which nine germed. They were planted in a 9 site(5gal.) rdwc system in a 5x5 tent with a 1000w. Once roots touched the water I gave them 3 weeks of veg, at that point they were all ~15" and bushy as hell.

Flipped and binned the 4 males, leaving me with 5 females. Stretch was 3x, internodal distance wasn’t too bad at around 4" between golf balls, healthy cola can size tops. From week 3 of flower and on they packed resin on top of resin, 3/5 had a very sweet lemony smell with a touch of earth, 1 was lemony with a robust earthy gassy smell and the last one was a bit of a weirdo lol. It had the most rubber like limps and an intoxicating gas and skunky smell and not exactly foxtail but hairy buds like I’ve seen some mango haze do. The last one didn’t feed anything like the others so it wasn’t too happy ha.

The 3 sweet lemony ones smoked really nice, with one being quite a bit more potent, giving you the “stare at the fridge” high. All lemon from the first to the last puff of a joint.
People still talk to me about it

The 1 lemon earthy gas one was my personal favorite, it packed the flavor and the potency was ridiculous. I always have my harvests tested by toker friends and man nobody could finish a .5 joint lol. It stank to high heavens. The smell proof back packs could barely contains its smell.

The gassy skunk one was a looong flowering mess, I cut at 65 days and this one was far from done… looked like ecsd in some ways. I smoked it anyway

. It was harsh but tasted nice for early stuff. The high was racy and gave cotton mouth only a garden ose could solve.

All around yield was good, ~1.75 lbs from 1k hps, they finished at 4’+ I had to break a few branches towards the end of flowering. Bubblehash made from that run made me a hood legend

(kidding, but it was delicious though, perfect high)

@Mithridate I don’t see this being a burner of a thread, so no worries if the conversation takes a stroll, all the best ones do!