The first carbon filter I ever bought lasted me four years. Not necessarily still scrubbing the exhaust air of the weed-growing smells, but it was still pulling air through it four years after I bought it. Which is all I really care about. I’m not worried about my neighbors smelling weed (pretty sure there’s a few growers on my block, there’s several houses that stink like weed every time I walk my dogs past them. And they also have multiple AC units on their roofs for like a 1400 square foot house haha!). What I care about is it pulling in the cooler air from outside the tent into the tent.

Anyway, like I said, my first carbon filter lasted forever in that regard, but I can’t remember what brand I bought. It finally crapped out on me two grows ago. And that was my fault. Somehow, I lost the pre-filter (I’m certain my girlfriend tossed it after I left it in the washing machine for a few days; she hates it when I leave stuff in the washing machine), so it was running sans pre-filter for like five months. That’ll make any carbon filter clog up or whatever.

So I bought one of those cheap-ass Vivosun carbon filters off of Amazon, just because I was broke at the time. That thing lasted three weeks before it stopped pulling air through it. Bought another, different carbon filter after that and it worked all the way through my last grow. But now it’s stopped pulling air through it, like only six months after I got it. I can’t remember what brand it is, either, but it was not cheap.

Anyway, I was just wondering what carbon filters y’all are using and how long they last you. I just ordered another one, Phresh. 6 x 24. I dunno, hopefully it lasts a long time, if for no other reason than I hate the whole process of changing the filter. But I feel like any carbon filter should last me more than six months. My first one did.

I have all mountain airs and they’re great. The one I’ve been using for at least 2 years and is still going strong.

In the early 2000s I DIY’d one from a link someone posted on Overgrow 1.0 . It worked great for 5 years. Going to see if I can locate that link…

Mountain air are quality filters , pricey but good . In the uk rhino used to be good then they got bought out and went to shit. Carboair are also good but not sure if available over there …

Ive used all Phresh filters and love them. I would be hard pressed to pick a better filter.

Good to know, I might be in the market for one this side of the ocean.

No just ‘mountain air’ lol, I meant all the scrubbers I have are that brand. They’re a bit more costly but still reasonable here in Canada.

Can Brand, Phresh, Mountain Air are usually the 3 bigger names. Don’t go with a cheap one unless smell is of no issue (which that seems like your case).

I’ve had excellent success with Can filters. They are expensive but worth the extra for sure.

Okay, sweet, Phresh is what I just bought.

@Tommy_McCain and @DannyTerpintine I’m pretty sure Can is what I bought six months ago and it’s already crapped out, not sucking air through it anymore. I should look at my order history to see which brand it was.

Canfilters usually last pretty long too. Is the CFM rating of the filter close to the CFM of the fan?

Yeah Can is my personal go-to. Maybe you got a bad one? (high humidity can also harm them).

I would suggest to get something much bigger than you inline fan. You don’t want to make the intake of the filter out.
The carbon is able to be changed on those filter too. You don’t have to toss them .
I use a 8in by like 3ft 1100cfm filter. Pretty cheap and works fine . I just had a birthday party for my 16 year old. 50+people all standing right at the duct exit . Nothing was ever said. When the exhaust goes off for the night the next day you get a smell.

Find many great new & used options and get the best deals for 8" Inch 1100CFM Inline Air Carbon Charcoal Air Filter Scrubber for Odor Control at the best online prices at eBay! Free shipping for many products!

To my understanding you always want to match the filter and fan. Going bigger with both never hurt. (also allows you to run your fan on a lower speed, so it’s quiter).

you want the air to move slowly through the filter. Te air passes over activated carbon the slower and longer the dirty air spends with the carbon the less smell you will have. Thats why they say to turn your fan down to help scrub your unscrubbed air.
Bigger filter will never hurt with in reason. The fan has to be able to draw through the carbon. I always use a size up . Heres a good explanation from other growers.

Carbon Filter that is higher then your CFM?

I am currently in the process of choosing a carbon filter that will fully rid my grow of odor when folowering comes along. After some research I have decided to go with Mountain Air. My problew, however, lies in the fact that I have a Vortex 6 inch...

In the early 2000s I DIY’d one from a link someone posted on Overgrow 1.0 . It worked great for 5 years. Going to see if I can locate that link…

I built that same one (if it’s the same one I think you’re referring to). I built one back in 2003 and another last year. Here’s the tutorial:

Material Needed
Yet another addition to the family of DIY carbon filter designs.
I modeled this after the expensive professional filter and after a thread on IC I don’t know from who but it didn’t have any pics. It’s very simple and easy to build. The only tools required are a screw driver and some wire cutters or snips of some kind.
All the materials were just under $70, here’s the rundown: last time i checked ebay were selling them for 125+ shipping. The carbon is what really gets you the pet store charges an arm and a leg…But with proper planning you can purchase 25 gallons of that shit off ebay for 30 bucks…I would of but i was in a tight squeeze and needed to get the smell out asap
Hardware cloth AKA rat wire~ $10 (the steel, not the plastic. in the fencing section of True Value or any hardware store)
6" & 8" duct caps ~ $4 (one each)
6" duct collar ~ $2
6" x 8" duct reducer ~ $7
Hose clamps ~ $6 (two 6" clamps and four 4" clamps)
6 7oz jars of Activated Carbon ~ $40 (from the pet store)
Small package of Poly-fill ~ $1.50 (from wal-mart)
Two packages(or two-pair) Extra Queen size black panty hose ~ $2
Extras you might want to pick up or have laying around:
Twist Ties
Scissors
Duct-Tape/Alumina Ducting tape
Round that all up to $70
I cut my hard ware cloth 2 FT wide and 17 inches Tall because of my fan moves 265 cmf’s you can make it bigger or smaller
Ok. First to build the “core”, get the hardware cloth out and wrap it around the 6" cap (for sizing, I suppose you could measure instead), and snip. Leave a few inches to overlap to strengthen the seem.
Be sure to snip so as to not leave a row of points, that will undoubtedly poke the shit out of you, not to mention it’ll rip the panty hose. 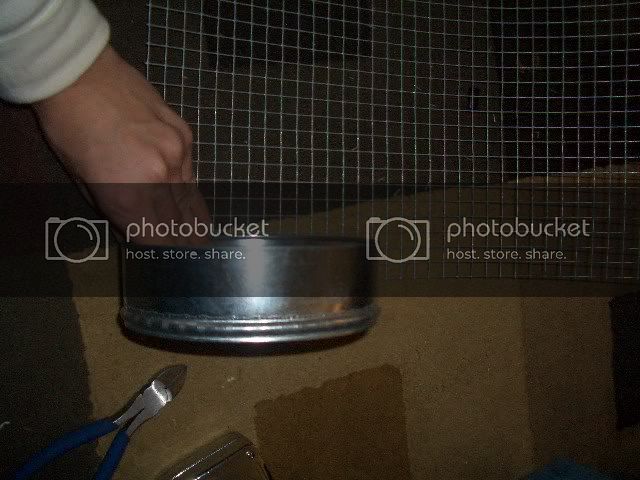 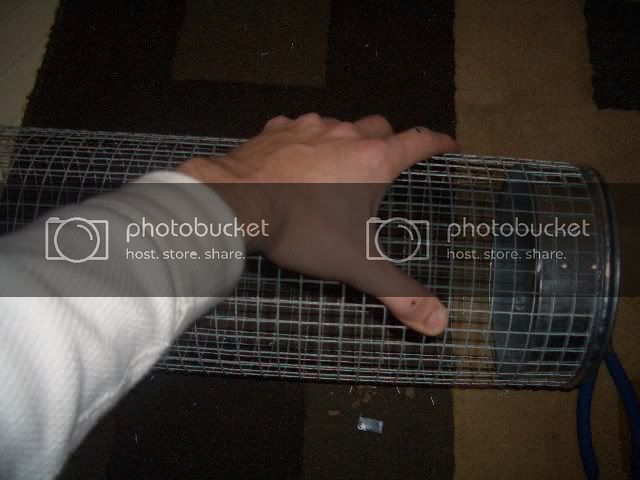 Once the HC is snipped and wrapped around the cap, use a 6" hose clamp to clamp it down. 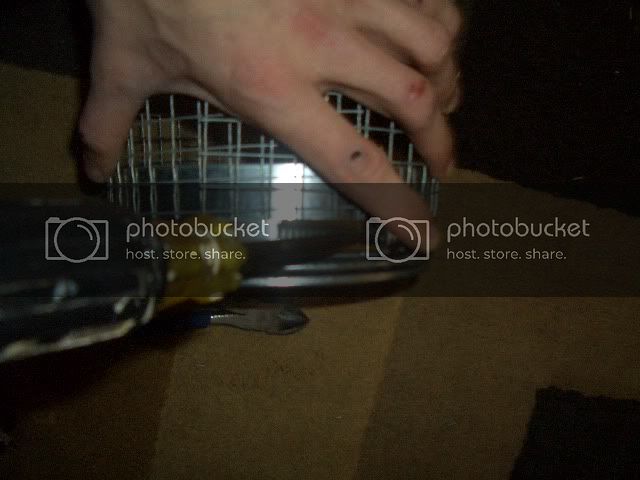 Do the exact same thing on the other end but using the 6" collar - put the crimped end of the collar inside the core, leaving the tabbed end outward. 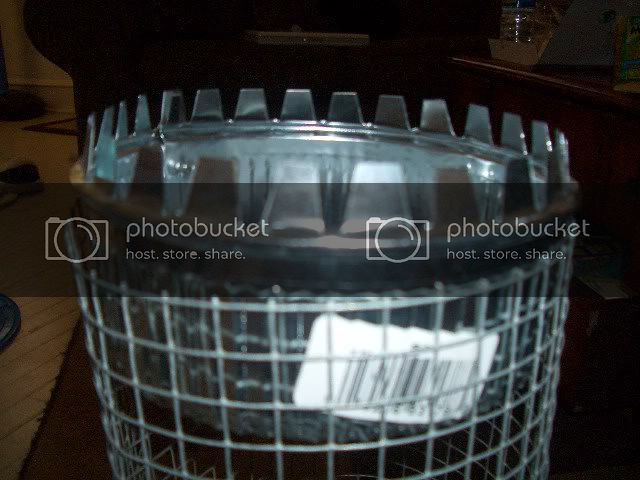 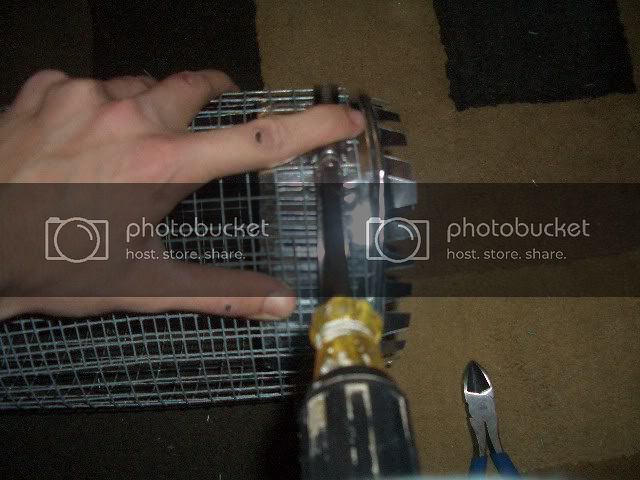 Cut the legs off a pair of panty hose and stretch each one over the capped ind of the core, stretching them and covering the entire core with two layers. 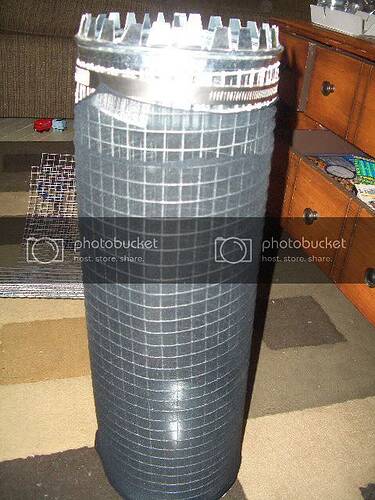 Posted Image480×640 72.7 KB
So that’s the core, it’s finished. Oh yeah, I added a twist ties in the middle of the core for additonal structural integrity, though it’s not necessary.
Next, take the collar-end of the core and set it into the 6" x 8" reducer as shown. Flip it over and tape the collar to the inside of the reducer. I used aluminum tape, but a good quality duct tape should do just as well. 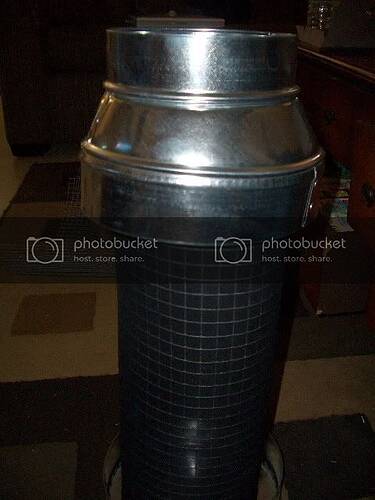 Posted Image480×640 41.7 KB
Fill in the space between the collar and the core with Poly-fill (batting or anyting of that noture will work just as well). 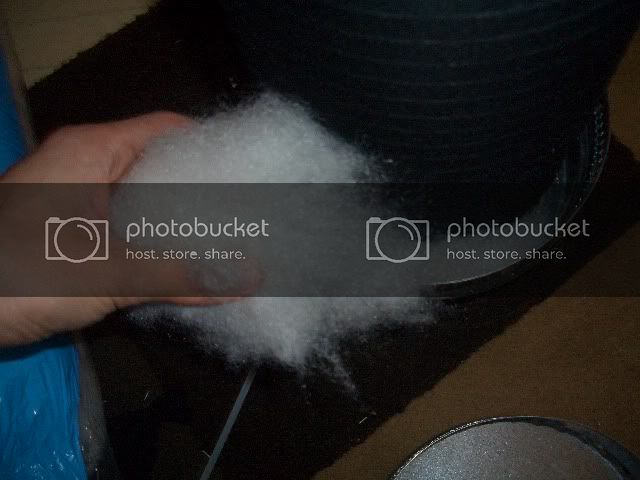 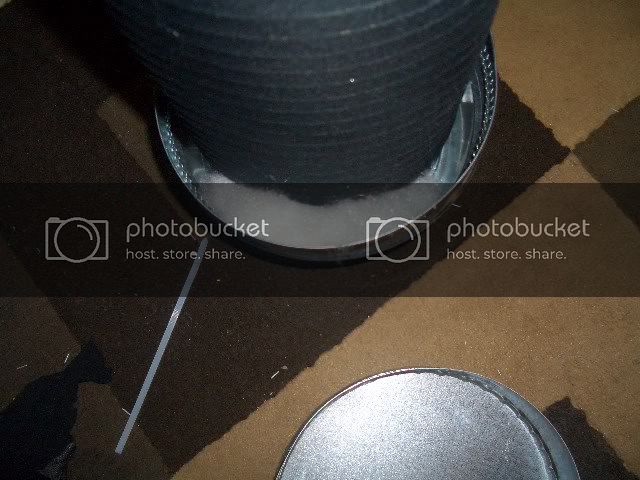 Once you have that done, it’s time to fix the HC to the 8" reducer. 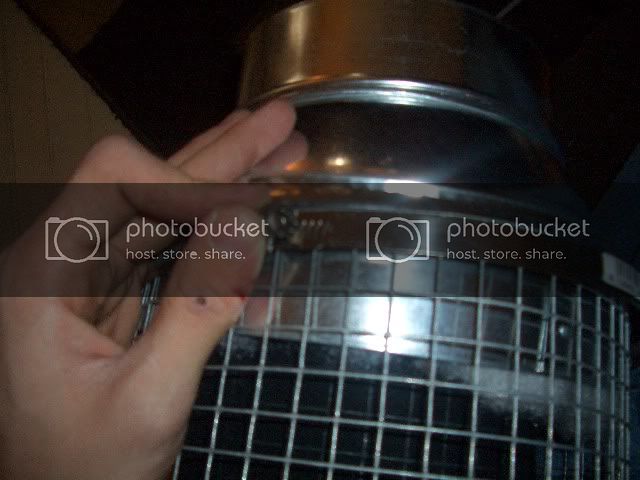 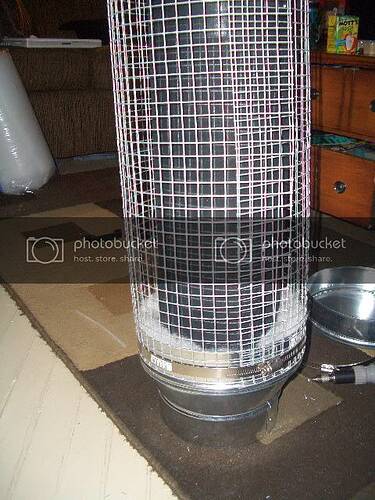 Posted Image480×640 80.1 KB
Place the 8" cap in the opposite end of the HC for spacing and structure.
Form the HC around the reducer, just as it was done with the 6", and clamp it down using two 4" hose clamp together-running into each other. I couldn’t find 8" hose clamps, so I put two 4" together. 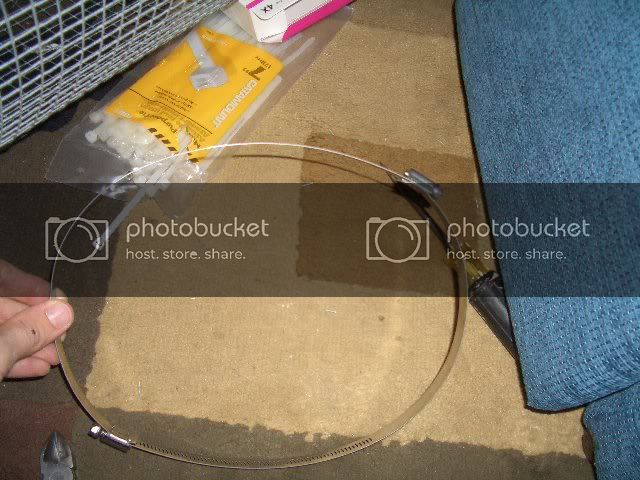 Now take the panty-part of the hose, the waste band and whatnot, and stretch it over the outside of the HC. Repeat with the other pair, so you have two layers. 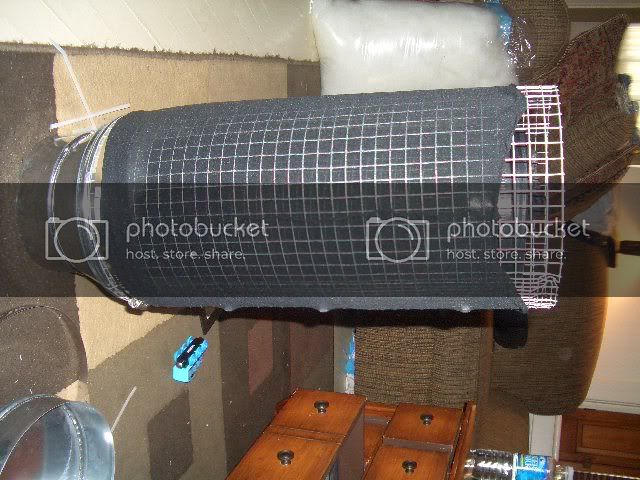 Now for the exciting part, fill it in with the carbon You may need to hold the core at first to keep the spacing even. This will give you a continuous 1" layer of carbon. Perfect. 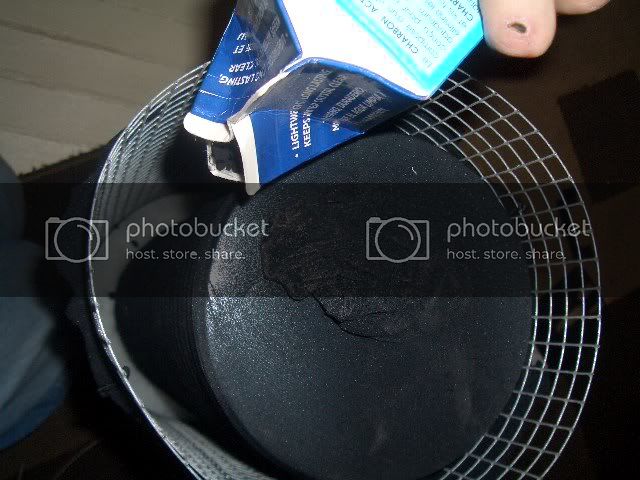 Leave an inch or two of space and fill in with the Poly-fill. 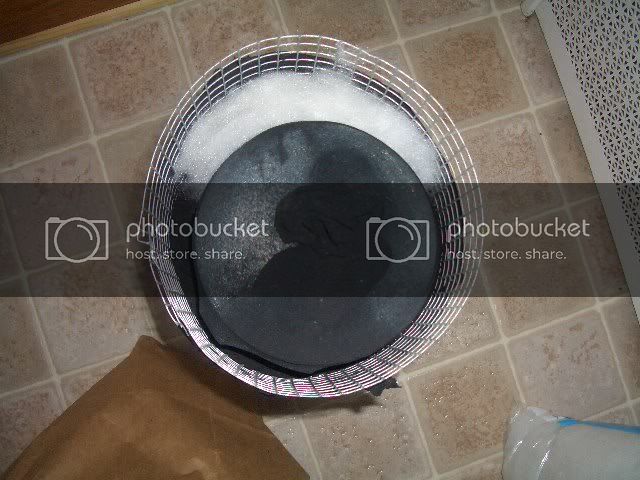 Now replace the 8" end-cap, clamp it down, and you’re done
To refill, simply loosen the clamp on the 8" end cap, remove the cap, dump the carbon, re-fill, replace cap. 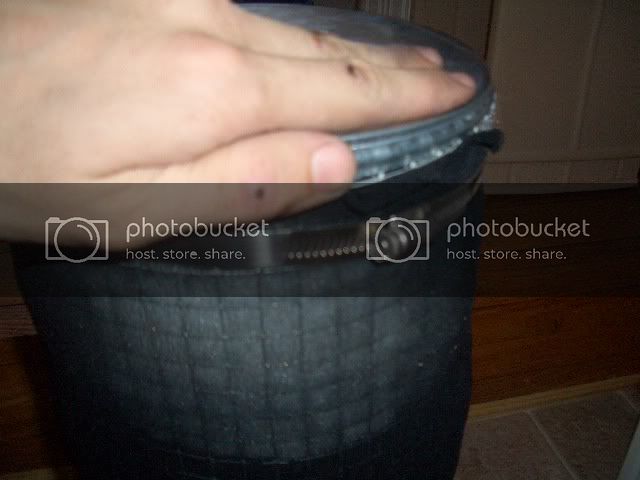 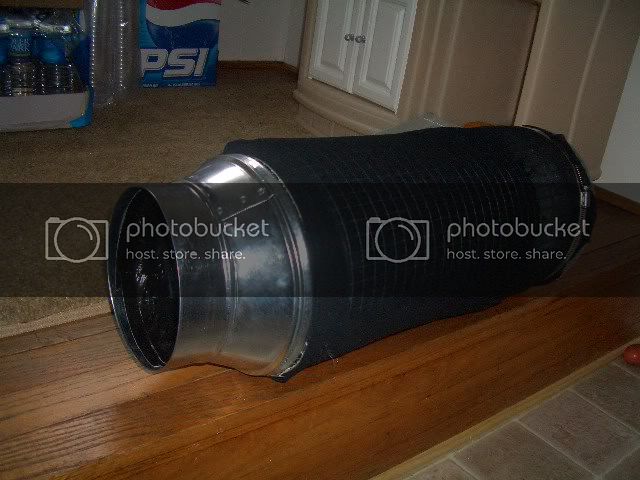 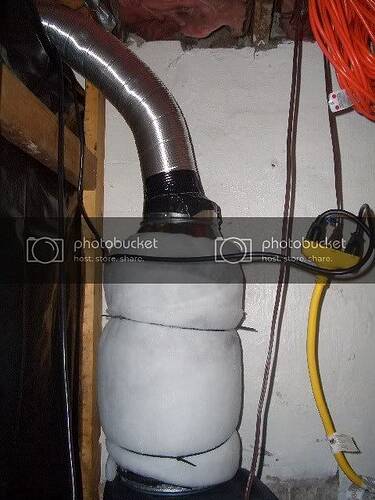 The differences between this one and the ones I built are size and amount (and source) of carbon. Mine is about 4 feet tall and I used about 30 pounds of carbon, sourced from ebay. The only reason I built the new one is because I gave away my old one. I had enough carbon material to fill it twice, so after a couple of years, I’d change out the carbon and “wash” the old carbon. Works like a champ.

Ive used all Phresh filters and love them. I would be hard pressed to pick a better filter.

Ditto. Phresh makes great fans and filters. You definitely get what you pay for. Not always true with grow equipment, but true in this case.

I’ve only used Phresh and they’re great. I hope you realize just how big that 6x24 is…it’s yyyyyuuuuuuuge! Too big for your space, but it’ll work for years without issue. You can also recharge and/or replace the carbon when you’re done with it.

A Canuckistan friend who gets tired of me tagging him had a Mountain Air for a couple months and the outside of his house reeked like Ed Rosenthal’s stash box. He replaced it with the same size Phresh filter and now he can’t smell anything except a hint of undetermined sweet smell, no weed. Perhaps the Mountain Air was defective, but there’s a reason why Phresh is the gold standard…

I hope you realize just how big that 6x24 is…it’s yyyyyuuuuuuuge!