Hi folks,
This is what’s going on in my back yard this year.
A mix of 5-7 gal fabric pots.
Medium is Westland soil with added John Innes compost. Perlite, and a couple of inches of a subcool supersoil that I cooked for six months. A mulch on top.
My backyard gets 5 hours of direct sunlight, trees and roofs shade it the rest of the time. It’s small but private.

John Innes compost is a set of four formulae for growing media, developed at the former John Innes Horticultural Institution (JIHI), now the John Innes Centre, in the 1930s and released into the public domain. The scientists who developed the formulae were William Lawrence and John Newell. The director at the time was Daniel Hall. Lawrence started to investigate the whole procedure of making seed and potting composts following a major disaster in 1933 with Primula sinensis seedlings, an importan... 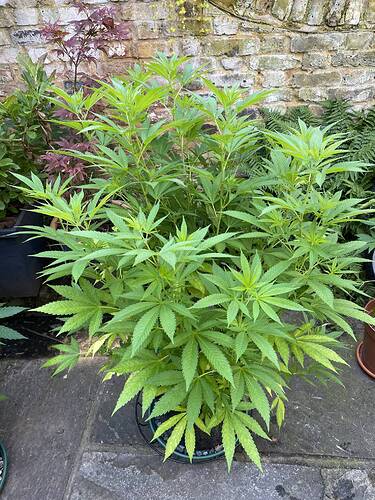 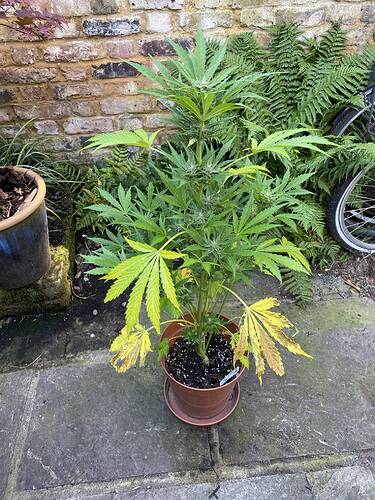 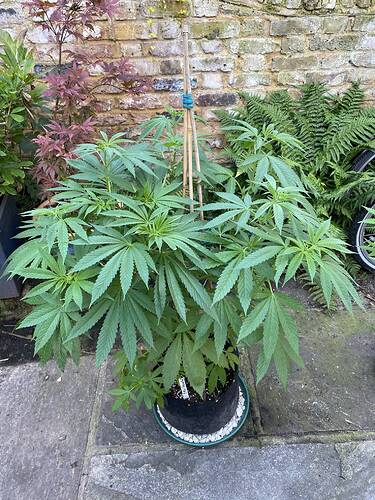 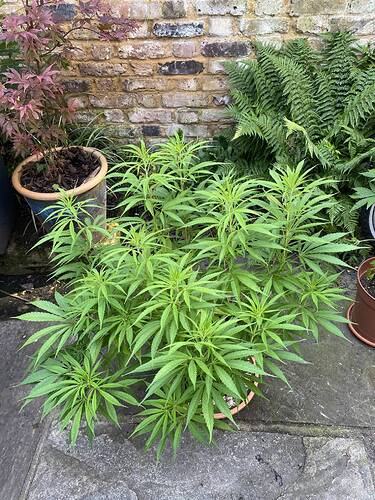 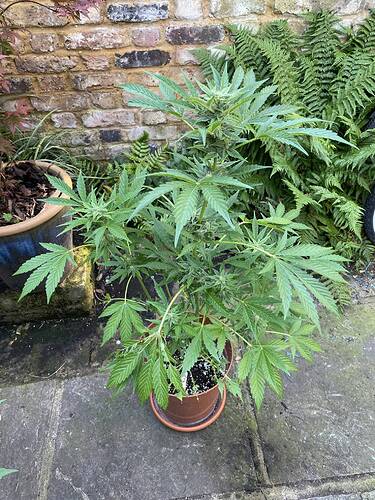 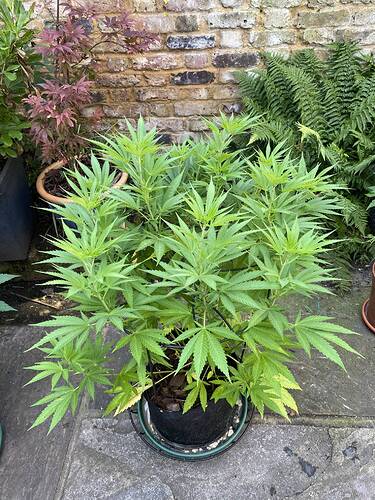 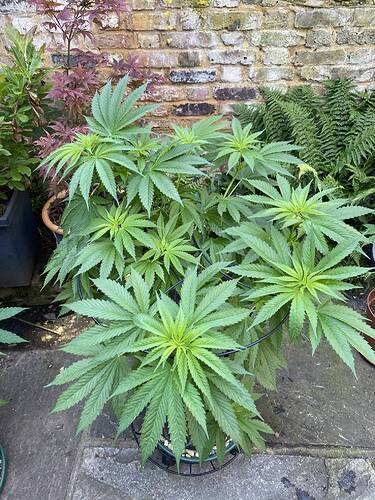 Also, this year I built a small bed with a couple of old floorboards up against the side of the wall to play with. I threw a couple of bags of soil and bone meal and supersoil and labs and perlite until it was filled. Not scientific. They’d be a foot higher than the pots and get plenty of light.
I put another Cannabiogen Durban Poison, @JustSumTomatoes Orange Grove x Northern Lights, @Barefrog @Mongobongo OG’ers Kush and two Real Seed Company Nanda Devi clones. 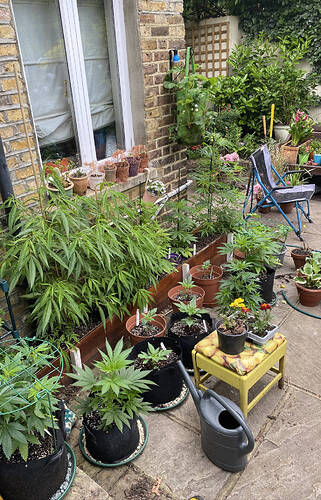 That’s how it started and this is how it’s going. 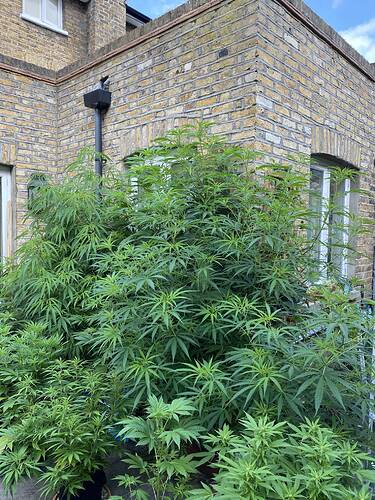 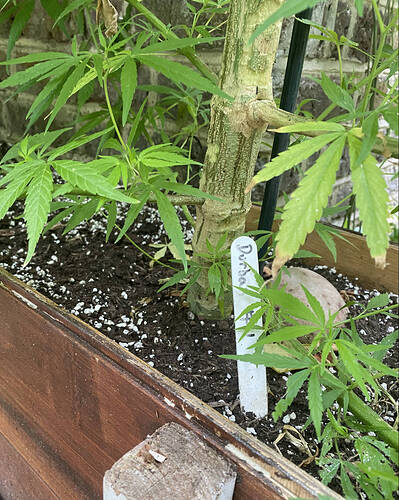 I’ll try and update but it’ll be sporadic.

I wouldn’t expect such a big plant from only 5 hours of direct sunlight im impressed! going to be sticking around to see how this ends.

!!! That’s pretty massive! And so early in the season, too! Looks like you’ll have a tree on your hands LOL. Looking great!

Very nice! You’re going to have yourself a jungle!

Soon they will climb that wall for a full day of sun!!!

They are monsters already, wow!

You have a good variety there, and a very nice garden!

Great looking garden. Will be following along on this one

Holy shit might get a couple zips off that

Looking at your massive Durban, its possible that’s what strain I had pop-up wild from last season. I thought it was a Malawi because it was such a massive plant. but the leaves look exactly like yours do. 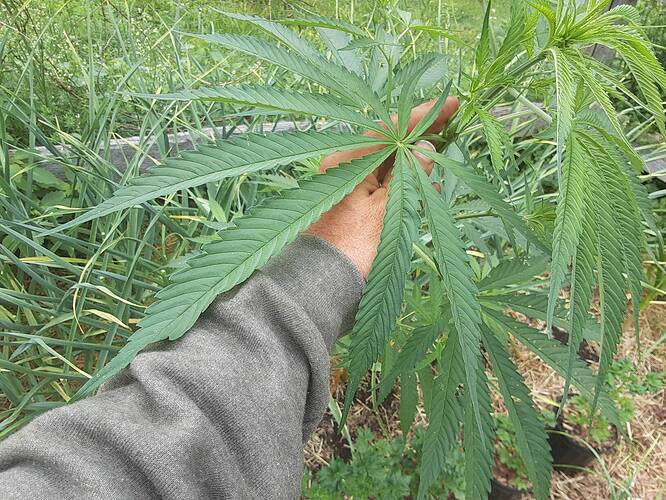 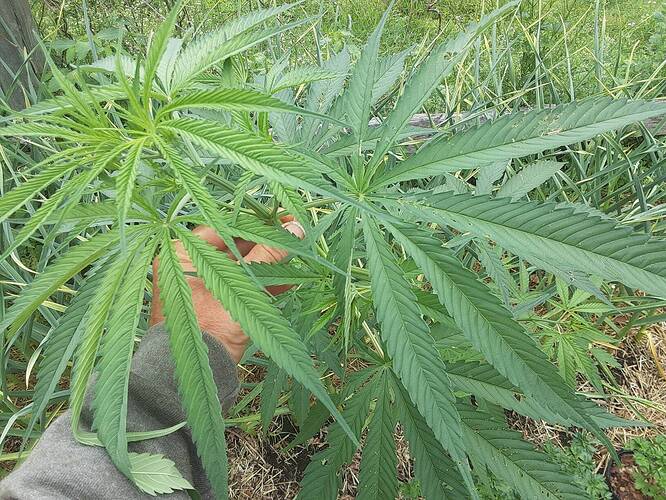 Yeah those fan leaves look familiar. The plant structure and branching is symmetrical, almost classical. A very easy plant to grow.
BTW all the plants have received is water. I gave the Nanda Devi some nutes once and it was waay too hot. So since I planted them outdoors I’ve barely given any of them water and no nutrients, so if I’ve done anything well it’s in my application of Litfa.
I am amazed at the height of the Durban and the bushiness of the Nanda Devi. If they keep gaining height I’ll have to do something but at the moment I’m kinda like a tourist at Mount Rushmore.

LOL! I think a couple of those presidents carved in stone at Mount Rushmore were fans of your favorite plant themselves😁
These plants really do grow themselves. When I can finally have a greenhouse here I will begin Force flowering sativas and growing them straight in the ground. They definitely prefer regular old soil but when gardening in a container I need to use something slightly stronger. Have you sexed the plants yet? The north Indian should be showing by now…
The Durban will grow taller for sure. Nanda Devi I’m not sure about, but it will probably grow bushier rather than taller. Should be getting ready to flower I would think. Great job leaving them alone. It’s not as easy as one might think. If it ain’t broke don’t fix it!

Do you have a way to cover the Durban to make it flower? Like perhaps a circus tent LOL!

Not a big enough canvas in London to cover these girls!

I’m not sure about flowering times for the Durban and the Nanda Devi. My hands are a bit tied as I can’t take them out of their bed or move them about so we’ll just have to vigilant from now till October.
The biggest concern is mold as autumn comes. I lost a few plants a couple of years ago and learned to pay attention when it rained in flower. Last year I brought pots inside at night or during bad weather. and successfully avoided any mold or powdery mildew. But with the worlds weather changed who knows what will come this year.

Anybody know what this round the leaf edges means? The plant is extremely healthy otherwise. 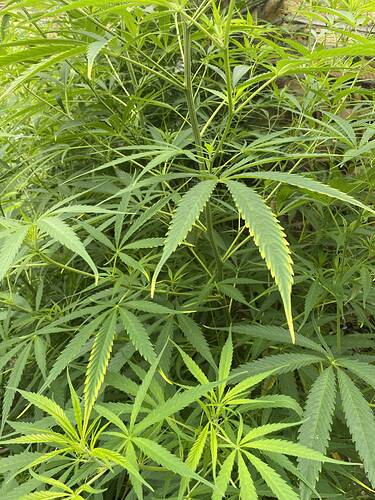 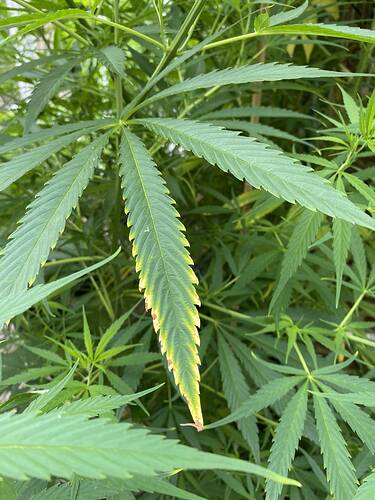 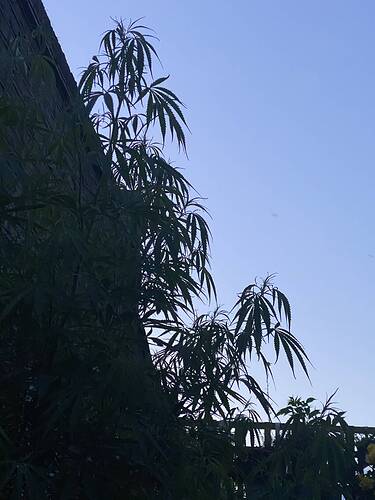 Looking great! Looks like some magnesium deficiency to me maybe. Some Epsom salts sprayed on leaf undersides in the evening time should do the trick for you.
The wild plant I have that I thought was Durban or Malawi is neither ( i dont think) stem rub scent is Unforgettable for me. It’s a Pulga Parvati plant. Nearly certain. I’m going to clone it. Smells so great!
Perhaps you could take a fleet of clones and immediately flower them… ? I’m concerned you’re Durban won’t finish…

I’ll spray it tonight.
I have no idea about their flowering time. Mid-late October? We can sometimes get a shitty summer and a long warm spell into autumn
Though who knows the way the worlds weather has gone.
I also have a small Durban in a pot.
Sounds like you lucked out with the Pulga Parvati.

Are you taking cuttings off of the big Durban? If you wait until it’s a couple weeks into flowering, your clones will Bud faster and more aggressively.
Do you have any new pictures? Can it all fit in one camera shot LOL? The Durban will be pickable after 8 weeks of flowering. It’s not the length of the flowering, but the timing of the flowering onset that has me concerned it might not finish . I’ll keep my fingers crossed you have one of those nice Autumn’s

@Upstate I’ve put the smaller Durban inside under a light 12-12. It’s now well ahead of the tree out back. This whole thing was a bit of an experiment so I don’t know if it will finish in time either. We’re having a shitty summer so far weather wise yet they continue to grow. 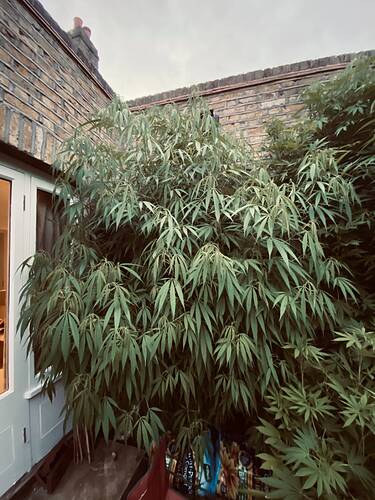 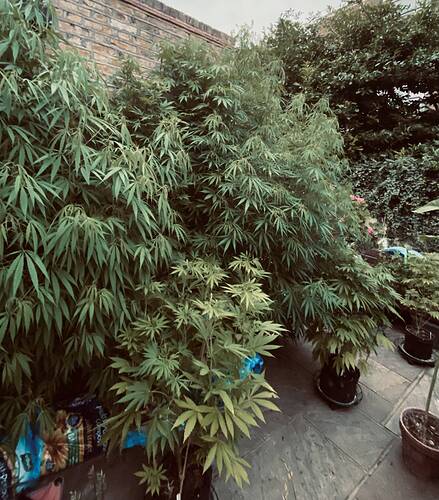 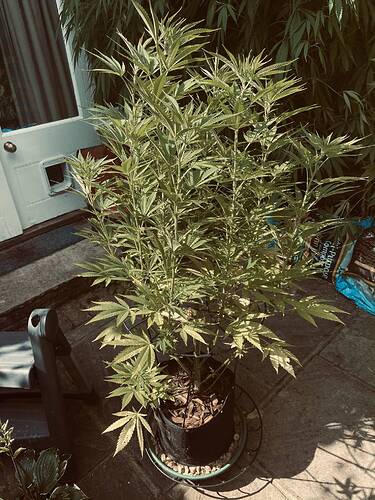 Mrs GB not happy about appropriating the whole garden.