How would you setup an axial fan in a grow tent?

So clip fans are a notorious fire hazard. I used to use them for all my grows, but after reading enough reviews of them almost burning down people’s houses… I decided to put them away. 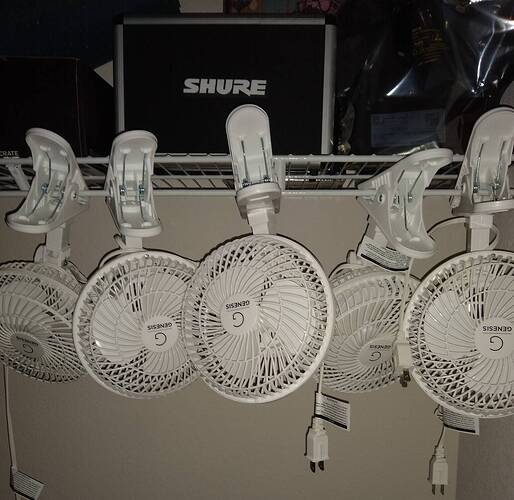 As an alternative I’m looking into using axial fans, like the ones used inside a PC case.

The problem though is how to mount them to what to be able to adjust their height as the grow progresses?

I have a couple of these fans: 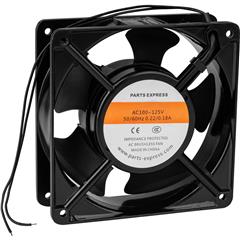 They actually move quite a bit of air. I think two of these in a 2x2 tent would be plenty.

My initial thought is to mount them to an aluminum bar or angle and then hang that with ratchet hangers like you would hang a grow light… This allows for height adjustment but it is a bit bulky and I’m thinking there is probably a better way.

Anybody done it before? Any ideas?

I made a bracket out of an old hanger from a fluorescent fixture.

I then used skewers and duct tape for extra support. 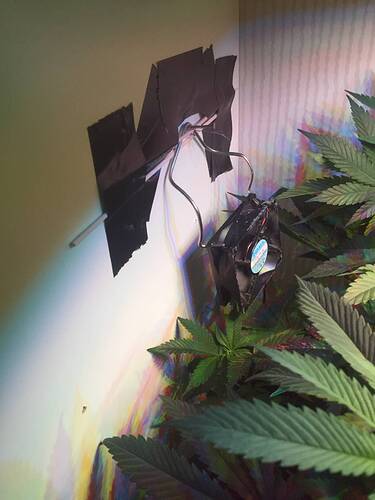 The bracket is a great idea that gives it some space from the wall which is definitely going to be necessary.

Maybe I could do something like that, but also put it on a ratchet hanger so I can raise and lower it. My tent is a bit taller and I’ll need to move them around some.

This fan is in a 20x30” cabinet and it
moves enough air for my purposes. I just want it to circulate a little.

If raising lowering is your priority I would think, off the top of my head, that you could put 2” long spacers through the little holes and then hang the whole thing from a string.

I definitely need to hang it, or find a way to clip it to the tent pole, but not sure on best way. I’ll probably mess with some ideas later today

I did something with my bigger fan that maybe you could adapt. Board attached loosely with zip ties on the sides so it can move and a rope above for raising/lowering. 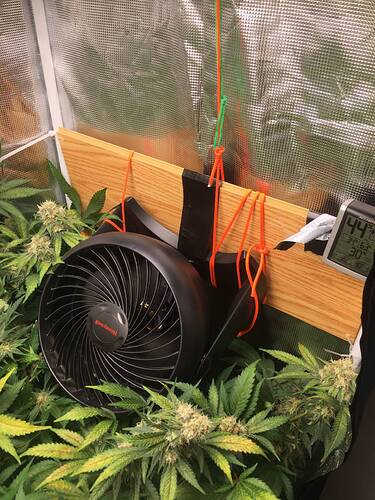 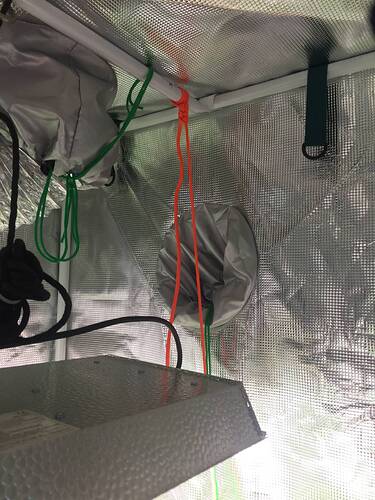 consider normal 12vdc pc fans would be better than the 120vac ones efficiency wise and would be safer, but i just have a piece of copper wire as a hanger for mine, which is screwed into my cab walls, i can bend and place the fan where i want.

yeah it was some thick gauge stuff, was actually just a single segment from a 7+core ground wire scrap chunk.

Do you think PC fans or axial fans are less of a fire hazard than clip fans? That’s basically my motivation for trying something else…

How do you clean them? Like a keyboard duster?

Yeah… That’s what I’m talking about

It’s not super uncommon to hear that has happened.

I keep one of these auto fire guards in my grow room just in case, but I’d rather prevent a fire than try to stop one. 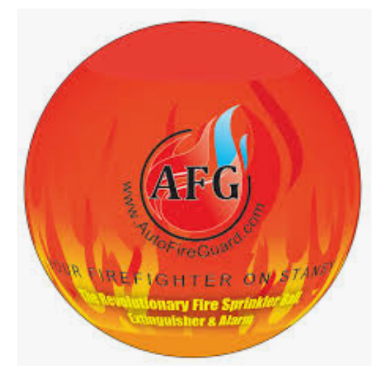 I also keep everything plugged into a GFI strip which I think would stop giving power to a fan if it started running like that, but who knows. 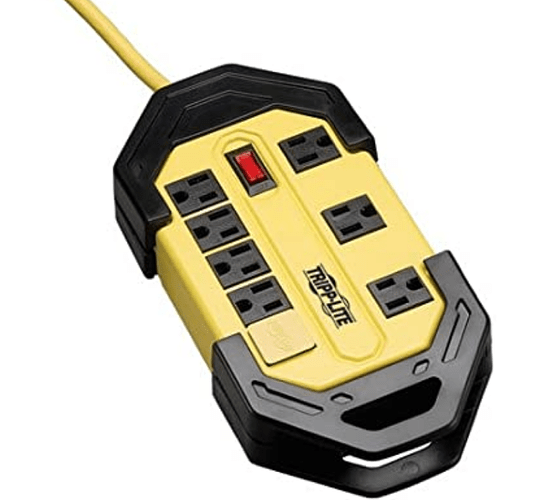 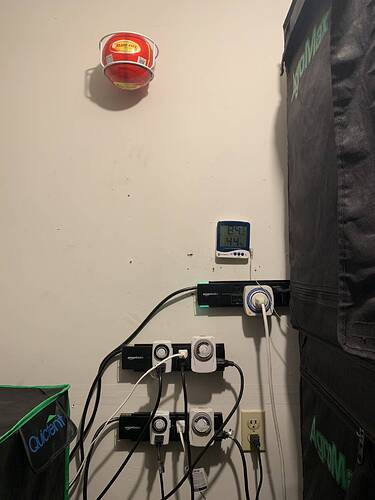 Never hurts to be prepared

I like to get a couple of the 120mm and string em together with a wall wart then make a frame out of angled aluminum. Ideally if you have enough of them in a line, you dont need to oscillate the fan as theyre constantly blowing across the canopy. You can do this same thing at the root base to help keep your plants cool in the warmer summer months.

Im not sure how those clip on AC fans have had issues but in regards to the fans you can get both AC and DC axial fans which is just what a pc fan is, but take your fan above for a similar output and size 12v DC fan they would be running at 10-40x less power for the same airflow, and i have zero concern over them starting any fires, them sucking in and beating and chopping leaves to death thats another matter.

if these are for your 2x2 tents for canopy level air you would probably only need 1 fan if thinking 120mm fans. myself in my 3sqft cabs i was running two 92mm fans, but i just removed one out of each side as i think it was a bit too much for how much the closer plants were getting beat around.

Did notice a good rollover effect with two running them somewhat close and parallel to the same wall, what would happen is that my airflow would be sucked straight up or down the wall to the fans then straight across the canopy till it hit the otherside and either drop down that wall to under the canopy and circle back or up into my lights to do the same. Could spray a mist bottle and just see the squared off airflow.

Sorry I did not have any snaps of my way.
I’ve been playing around with sourcing cheap stuff to make a small 1 plant grow area.
The green coated wire you find in any DYI store, sold in a roll, with various sizes and lengths.
It cuts VERY easy with a decent wire cutter, hell mines not decent, it’s Harbor Freight, and cheapo to boot.
I also got a package of 6/32 machine screws and nuts.
I also found many uses for a package or roll of pipe strapping.
I can cut it with my sheet metal shears to lengths I need…again HF!
I used the garden wire to first make a circle, then I fit the fan to small piece of wire with pipe strap, and that hands down in the circle.
I use the wire to make hangars and what not, or clips to hold the wire structure together.
Also it makes great rabbit protection in my garden, just circles of wire around a plant.
great drying rack, so so many uses.
PS edit: That is just a roll of reflexive insulation, hog ringed to the wire frame.
Like silly simple.
WHEW, sorry to be so long winded about something so simple.
Now a few snaps, and best of luck in your endeavor. 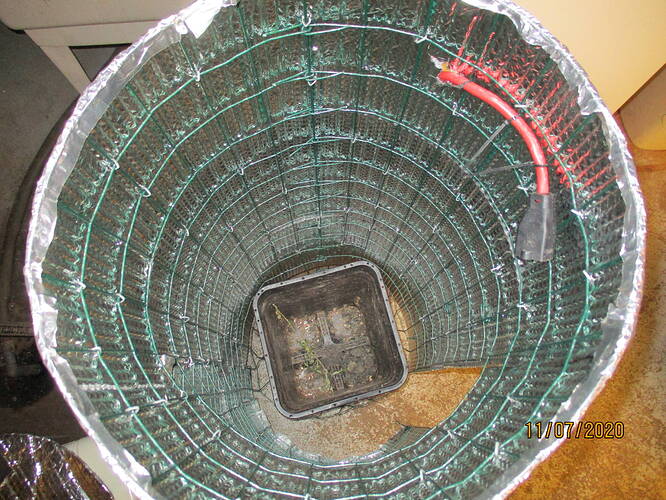 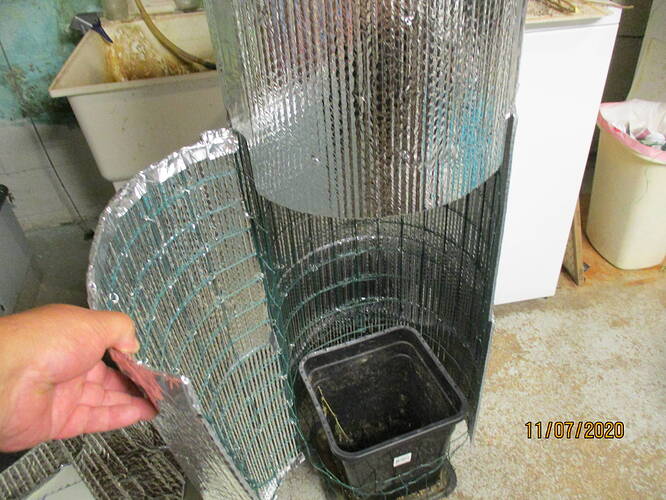 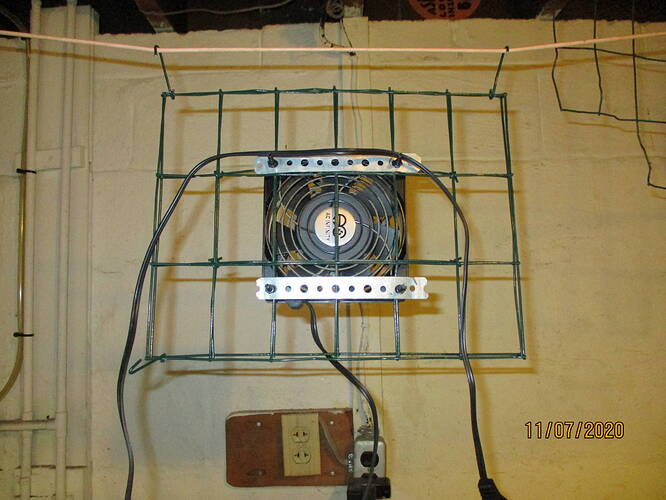 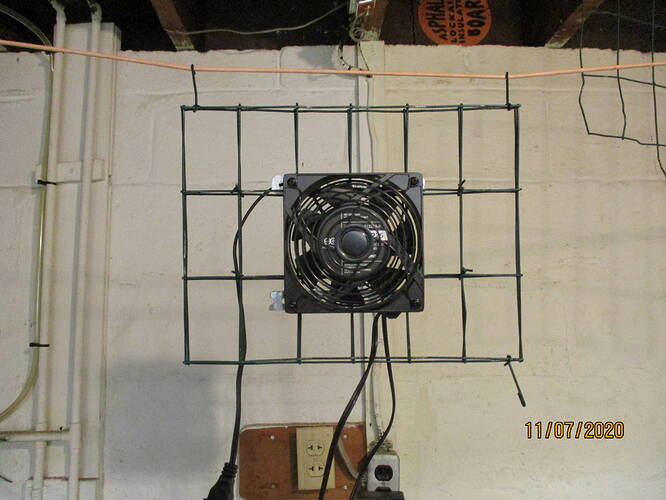 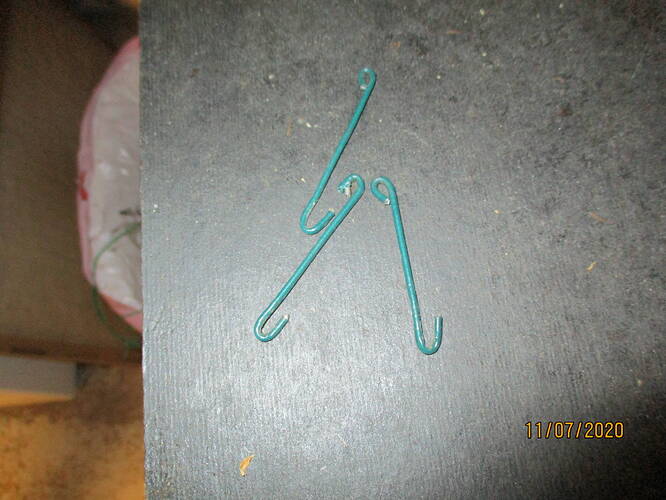