In Summer 2019 I consulted for a LP startup on Vancouver Island. A substantial seed budget ($10k US) was afforded the head grower to acquire exclusive genetics in an outdoor phenotype hunt. The seeds were largely purchased from Speakeasyseedbank. Two packs of Cannarado’s “Sundae Driver (S1)” were germinated. From among the 20+ plants three male expressions were found. This “S1” release by Cannarado has been highly criticized, as many have claimed to found Males in what should be Selfed (and therefore female) seeds; pollen contamination from a male was suspected. However, with an understanding of genetics, one knows this is not necessarily the case; such a complex polyhybrid with demonstrable instability (many growers report “hermie” issues in growing the Black Sheep Cup Cut of Sundae Driver) is completely fecund in its ability to produce true males. Any S1 of a genetic which has been observed to express intersexual traits is prone to producing males or true hermaphrodites in Selfing. Regardless, no genetic testing was done and the potential mystery progenitor is not identified beyond the assurances of Cannarado and several growers of the SD (S1) seed stock. 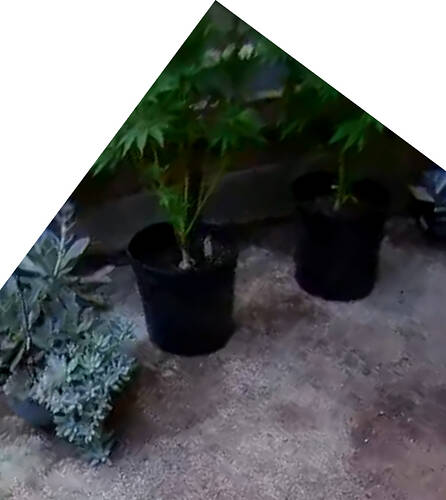 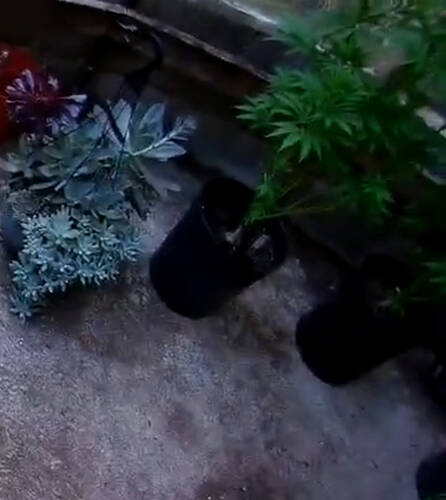 The quality of these images is so terrible because they are cropped screen caps from a YouTube video I uploaded which captured the males on camera. Unfortunately, as these males were identified for their special genetics (there was great excitement among our team) they too were forgotten when we properly doccumented the 25+ other chosen males from the 600+ seed population. To review our selection efforts and near-thorough doccumentation, I have made the selections available for public view on my Google Drive:

Each of the above males were used in one-off crosses with Death Bubba, GSC, Afghani Lemon Haze, and others. Excess collected pollen was sold via Strainly.io (user seven_trees) throughout September to October 2019. ($100 US / vial; one vial per male sold to maintain exclusivity for breeder interest.)

In Autumn that same year (2019) I was gifted an 18-pack of Hubbabubbasmelloscope seeds by my mother (Happy Birthday to me.). I grew them out in 1gallon fabric pots SoG style on the floor (aisles) of my veg room.

On a whim, I pollinated several of my favorites, based solely on early-flower terpene expressions. I used a combined equal mixture of Sundae Driver #1, #2, and #7 pollen to perform a Hubbabubbasmelloscope x Sundae Driver (S1) selected open pollination; three females by three males.

Below are my notes regarding the #7 and #2 males:

"The #7 is really what’s special here. It’s puke. That’s it. You stem rub it, and vomit. Clear as day–someone puked on the side of the road, and it’s under your nose.

The #2 is sweet smelling, got a vanilla ice cream with a hint of lemon backdrop going on."

There are no notes in my records of the Hubbabubbasmelloscope females. From memory I recall they were bubblegum, strawberry creme savers type range of terpenes. Very sweet and candy. I enjoyed the small yield of dry sift from them all combined. Records are further lacking with no photos of their flowering or growth; a novelty and gift I had supposed, and did not think to record it as thoroughly as an intentional project.

A year went by as I continued to work on my day-neutral Tangie, Granddaddy Purple, Hindu Kush, Purple Kush, and Skunk #1 lines. These are all regular autoflowering genetics I am currently working forward from F2s to F5s. As well, a large effort was devoted to hunting through a CBD Blueberry stock I had hopes in, but was found to be of no value. (The Blueberry was entirely absent and the floral morphology was too poor for anything but hashish production.)

This winter, with 2020 coming to a close, I began searching for a complimentary autoflowering genetic to hybridize with one of the two terpene expressions my GDP line was showing; a Skunkier foul smelling expression and a lighter grapey fruity expression. My intention is to work forward the GDP line into grape and purple coloration. From the population I wish to remove all skunkier phenos and create a second divergent line.

Looking through my spreadsheets, I noticed a small inventory (30 seeds) of a cross I had not remembered: the Hubbabubbasmelloscope x Sundae Driver S1 open pollination.

I sowed all 30 in the two preceding days of Aries before the Full Moon on November 30th. Seedling emergence occurred in concert on the full moon day, November 30th. All thirty germinated successfully.

I’ve since been growing these plants inside my home, in a large soaker tub in the upstairs guest bathroom. It has been nice to have plants inside, and I find I am spending more time in this bathroom than the master; I even moved my hygiene products there and now merrily brush my teeth as I see them growing behind me in the mirror each morning and evening.

I started in 1GAL 5" Square pots with an 11/13 schedule for several reasons:

To my surprise, the entire population was day-neutral dominant. I quickly (within 20 days) had sexed all thirty and culled 10 of the 14 males. In the coming weeks I transplanted ten selected females into 2gallon pots and identified and segregated two males for flowering in a small 18"x36" tent.

The 18"x36" Vivosun tent (originally purchased as a “time out tent” for training our dog not to bark at strangers) has no fans or ventilation except for the action of convection current; and so the light schedule in the tent is set to 15-on 15-off, for 20 hours each day; followed by 4 hours off. This allowed the inexpensive (somewhat of a fire hazard) 50W Cob LEDs I foolishly purchased to cool adequately without exhaust. I’ve been pleased that pollen collection is going well, despite the complete lack of airflow save convection current. I wonder if the plants think they are living in a very oddly cloudy part of the world.

Today I have used pollen from both selected males to pollinate the earliest three females. In the coming weeks I will continue to harvest and apply pollen to the HBSxSD127 females as each reaches appropriate maturity.

What began as a novelty in my mind has now gotten me rather excited. I have smelled a great diversity of terpenes; from mature aloe, to mint, to ammonia, to candy, to puke, to vanilla. I am very excited to have these several HBSxSD17 (F2) populations to choose from; including one highly vigorous tall growing phenotype with impressive lateral branching. (Sure to be an outdoor 2021 candidate.)

Overall I am sure I’ll have great stock this summer–as well as some leftover F1 HBSxSD127 male pollen–to inter-cross with my now F3 and F4 GDP lines.

Thanks for reading. I’ll be happy to update this thread with my results as they unfold. My hopes are in isolating a Pure Puke selection next round, for cross into the Skunkier/Funkier GDP phenos which express. As well, I am hoping some of the potency and sweeter terpene profiles may recombine favorably with a GDP grape selection. And finally, it was the SD Blacksheep Cup Cut which shows hues of black in its floral morphology; I hope to incorporate some of these darker colours to produce purple-black expressions in the new ‘F1’ cross. ie. GDP Dark Purple Pheno x (HBSxSD127 Dark Pheno)

Thanks for reading!
-Dr. Zinko

I’ve now updated my Google Drive with photos of the current cycle:

Sorry for the off-site links. I see that this website is under some heavy traffic. I thought it best not to upload too many photos.

Ill be the first to pull up the ol’ lawn chair

Really like what I’ve read, this should be a very interesting thread. Vomit phenos are always fun

I will be along for the ride here as well!!

Only have enough coin for the cheap seats, but the view should be ok. Super good luck on your efforts. ALL, do continue to take care, stay EXTRA safe and, indeed, be well…mister

So what’s your end goal.