Chuckling the other day when people were giving @ToddMcC grief about asking $20/seed for some seeds of great provenance. Laughed even harder when I saw this today. Not disparaging the breeder about whom I know nothing. $110/seed here. Just funny. 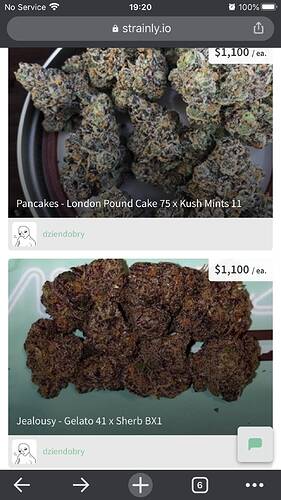 I think PT Barnum had a saying about this lol

Could it be some sort of marketing strategy??
They figure the packs will move fast when they put them on sale at 50% off?
Their business model makes no sense to me…

The breeder must be smoking the good meth

Now if they were a reproduction of seeds found in a 10,000 year old tomb then maybe those might be worth that much. But nothing available today is worth more than $10/seed.

I have a problem paying that much lol, probably why I don’t run many autos

I’m more of a bargain bin beans guy myself.

me too!! If there isn’t a promo im a no show

I’d be for going in on a pack of the expensive stuff like aficionado and f2 them and give them away. I’m not advocating to do that to decent breeders that charge reasonable prices but I’m all for putting a dent in an assholes pocket that thinks 10 seeds is worth $500

Like the saying goes…a fool as his money are soon parted.

Guess he is only a fool for asking it. He won’t be a fool if someone buys them…lol

Not disparaging the breeder

No worries, I will. The guy’s a clown.

You get what you pay for is often applicable, but not here haha.

Any breeder charging over 100 for a pack a seeds is a clown. Heres a few for you… dying breed seeds, riot seeds, GGG, jungle boys man the list could go on and on. Man most of these seed companies only been around a few years or so its ridiculous what they charge. On top of that they are all making the same shit.

Look at Dutch Passion’s gouge job on their THCV strain…

THC-Victory is a unique plant with a 1:1 ratio of THC and THCV, the long sought-after, new cannabinoid. THCV short for tetrahydrocannabivarin is of great medical interest in several fields.

Yeah that’s fucked. I’m so sick of companies hoarding genetics of real medical value, either keeping it out of the hands of patients, or effectively extorting them for the medicine they need.

I’d like to nominate archive seeds for the “pricey bummer” prize. They operate a dispensary in my city, and do not offer any seeds from their lines that have actual commercial value, or medical lines. They only sell very convoluted polyhybrids for hundreds of dollars a pack.

They used to have a line called One Star. Stardawg Guava x Ohio Lemon G.

They chose their keeper by selling batches of all the different phenos to other dispensaries. They had one with very high medicinal potential, containing about 15% thc, 5% cbd, and a wealth of trace cannabinoids like cbg.
Pretty soon, they had narrowed it down to just one pheno with 31% thc and no medical value or trace cannabinoids.

I contacted them and asked if One Star would ever be available in seed form, or if they would be willing to sell me their discarded “non keeper” cut with 15% thc and high trace cannabinoid content. They told me “one star only exists to win cannabis cups for high thc. There is no way we would ever let this one get out into the public.” and a few other things.

Any breeder who says that medical cannabis is not a worthwhile cause probably shouldn’t be working with this plant.

At the onset of legalization in my state archive and a breeder called Hermetic Genetics were the only seeds available in dispensaries. Hermetic was also kind of disappointing, classic legalization more funding than knowledge type operation. Their seeds had a low germ rate, cost $110, and when I looked into it on their instagram, at least one female in the genetic line of their “root beer float” had hermed. The breeder said it was useless at that time. But then it shows up in the genetics of a line they are selling? what’s up with that?