My buddy, E-Rock talked me into starting a project. I picked up the 1998 Jeep (XJ) Cherokee. She’s pretty rough with 277K miles (allegedly 150K of that was flat towed behind an RV). It has a 10" lift, 35" tires, control arm extensions, cross over steering, chromoly axels, ARB air lockers, and rear disk brakes already. The front and rear bumpers have been re-done, along with rocker panels, and the gas tank has a skid plate on it. Some of this stuff I don’t know what it is and have had to research them myself, but E-Rock has a 1998 (TJ) Wrangler which is basically the same vehicle

He also threw in two transfer cases, as spare transmission, CO2 bottle (for the lockers), spare axel, sway bars, and some other spare parts. The previous owner, jokingly, told me he would sell me all the parts on the Jeep for $5k and throw in the Jeep for free.

It drives and runs, but she still needs a lot of love. First off a whole new exhaust is planned so it will pass emissions, otherwise I won’t be able to register it. The previous owner lived outside of the city and didn’t have to pass emissions. The winch needs a new relay, it needs new shocks, and springs in the rear, a spare tire (I have the rim), and sway bars for a start. Here she is parked at my house before any work has been done. 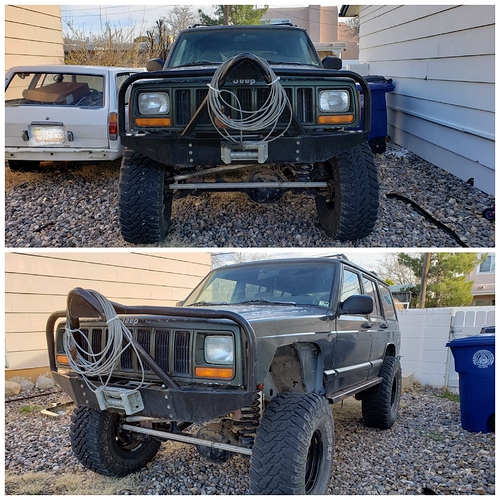 Here is E-Rock playing around with his Jeep (TJ) Wrangler, driving it up my 35" tires without any other of his tires even leaving the ground. Apparently this is a Jeep thing. I think I have a good partner for this build. He is loving it, I spend money on parts and he gets to play with them. It’s like Christmas for him when new parts arrive. 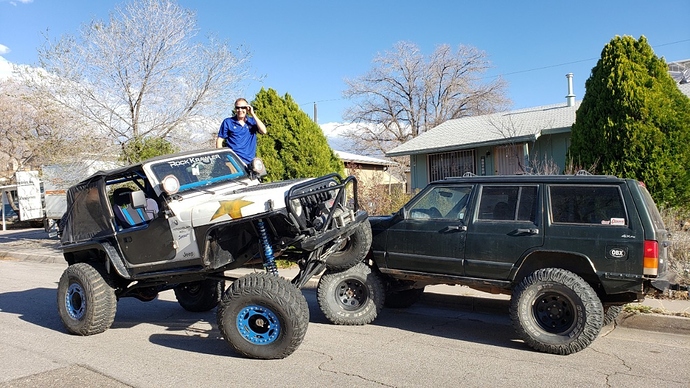 You can tell this thing has been sitting in the desert sand for years. Had to give the exterior a good wash down. E-Rock told me, “I don’t work on muddy Jeeps”. I need to degrease the engine too, I think I can handle that. 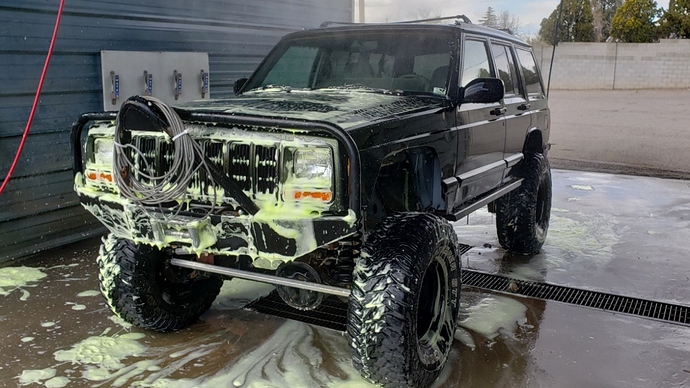 After my first time driving it at night, I noticed the instrument cluster wasn’t coming on. So E-Rock bought me some replacement green LED lights to change the color, he also got blue ones for his. After ripping out the dash and getting to the instrument cluster, I replaced the bulbs but it still wouldn’t come on. They would flicker when I would turn the lights on or off, so I replaced the headlight switch while I was there. Still nothing. I checked all the fuses in the dash with no luck. After some google searching, I found out there is another fuse under the hood. Sure enough it was blown. It’s fixed and now my instrument cluster glows bright green. 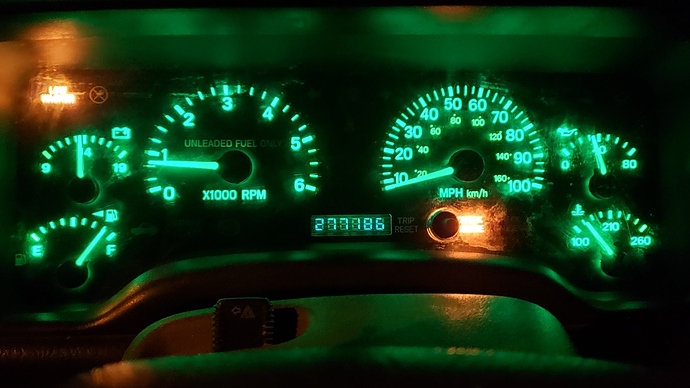 I rigged up the back hatch so it opens from the outside. From looking at the rest of the work done on this vehicle, it’s clear to me that bailing wire and bubble gum are OEM approved repair materials for Jeeps. I ordered a cheap stereo and speakers, that should fill the gaping hole in my dash. Exhaust repairs should be completed this weekend.

The first day I drove the Jeep I took it around the block to pick up my daughter from school. I parked it and when I came back with my daughter, it wouldn’t start. I pop the hood and with my limited knowledge wiggled the loose positive battery terminal. So we walk home and ask E-Rock to help bail me out (apparently this is also a Jeep thing). He gets there and opens the hood, wiggles the positive terminal, and then it starts!

Anyway, today I decided to replace both battery terminals and solve this problem. The jeep starts up much better now, guess it wasn’t quite getting enough juice with the faulty terminal cables. 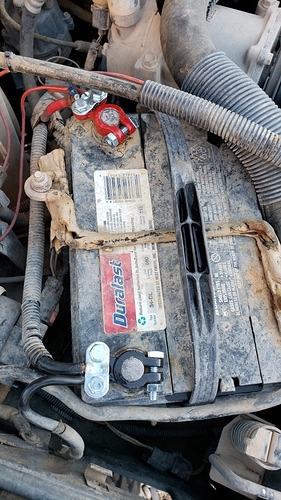 I decided to swap out the rear speakers since I have them already. The new stereo should be here soon. Can’t wait to have some tunes in this pile-o-parts. 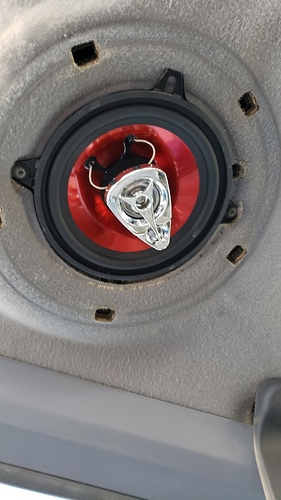 E-Rock talked me into getting a whole new header to go with the exhaust. The stock Jeep manifold is known for cracking (and mine is clearly cracked already). I also ordered an LED light kit for the interior. There goes another $150 into the project. So far I’m roughly $600 into parts. She still needs a name, I’m thinking along the lines of Toxic or Biohazard. 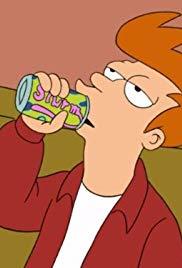 I love seeing projects such as this. Breathing new life into something most people would just abandon.

something most people would just abandon.

Good eye, I think it’s a 75 if memory serves. That’s my brother’s car. It’s been sitting there for three or four years now. He keeps threatening to tow it to his house and replace the blown motor with the one sitting in his garage. He is a reformed Datsun nut.

Tell him to just replace the entire car haha

First thing I thought when I saw the picture and all the winch cable was “Man, I could get into a lot of back lakes for fishing with one of those”. Would be perfect for all the old logging roads around here… Good thing you have a Jeep gearhead to spend your money for you, but I am sure you will enjoy it when it’s ready…lol

Got a little high and bored, how about this lol

We had some sort of little baby blue datsun when I was a kid, and a Pinto that got burned by a molotov cocktail. Then it was the Jensen Healy…doubt any of those things are even around anymore, super cute, but I don’t remember that car ever working… what a pos. Haha! Y’all are aging me with the Datsun talk…

I have a 94 jeep cherokee been working on it for awile will have to upload some pics. Remember jeep stands for just empty every pocket lol

Looks pretty sweet @ReikoX! You have to bring that thing up to the Rocky mountains!
I’m usually a lone wolf so here’s my rig on top of engineer pass 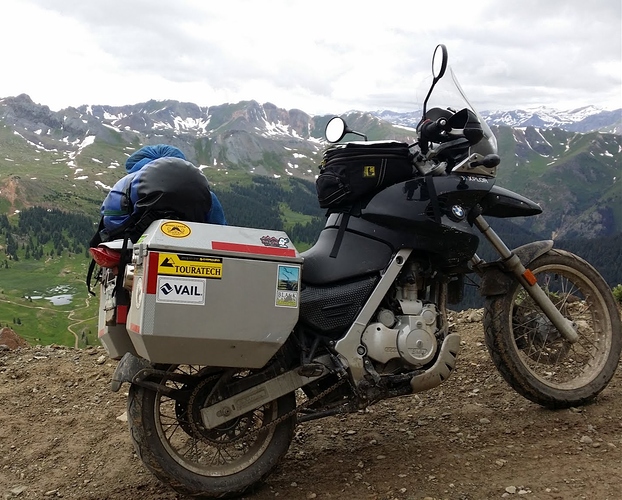 That’s the first Beemer bike I’ve seen without the opposed-cylinder engine… interesting. Those old BMW bikes have a distinct sound.

Have fun with your project Reiko. Best advice I can give is to NEVER add up all the receipts! $150 here $150 there is easier to swallow than when you realize you just dropped $5k $150 at a time

Thanks all, it’s a fun project and definitely a money pit. Luckily I just paid off some debt and freed up some monthly expenses. My friend is laughing at me for buying seat covers and a radio. “Why do you care about cosmetics?”, he asked. Because that’s the stuff I can do. Cutting and welding are not my thing.

Anyway, front speakers are in. There is sand everywhere in this thing, even behind the door panels. Anyone who has ever been to the beach knows what I’m talking about. 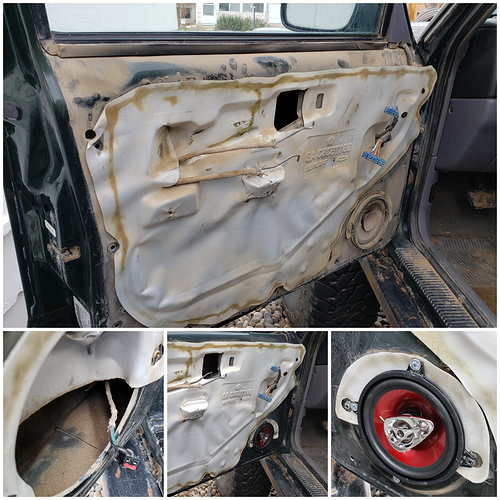 My exhaust is here, I should get the headers today. Everything is a go for this weekend. 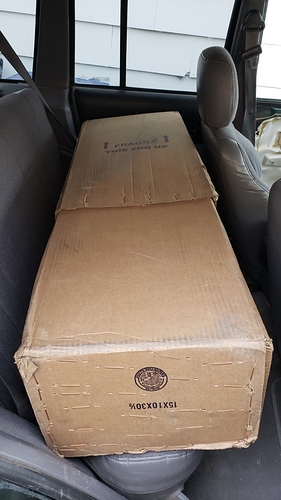 My buddies were telling me that I dint get to name the Jeep, I have to earn a nickname for it. They then proceeded to suggest Phlegm. Fuck that the Jeep isn’t that nasty.

Got the door panels back on. While they were off, I cleaned up the power window controls on front driver and passenger side. They were quite dirty and had a lot of corrosion on them. I may just order new ones, the door locks still don’t work. Checked all the fuses, all good there. 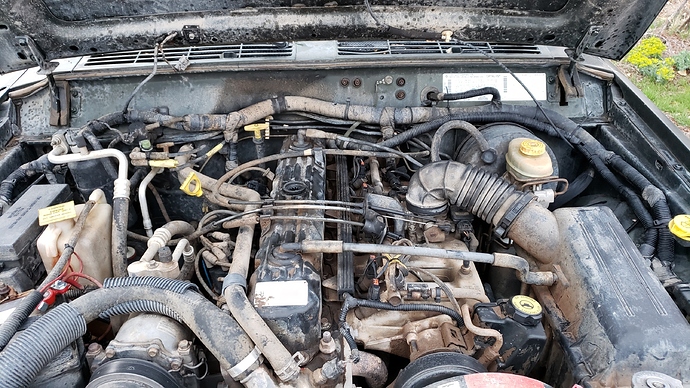 My buddy wanted me to degrease my engine. To be honest I was/am a little nervous about spraying the inside of the engine with the power washer. Everything seemed to run ok after, but I still need to hit it again IMO. I will be in there this weekend and cleaning up some more

I wouldn’t worry too much about using a power washer to clean or degrease an engine. I used to work at a local car dealer in the Clean-Up Dept. and any older vehicles taken on trade would get an engine wash. Back then, we would spray the shit out of it with Spray Nine, let it soak for a bit, and then hit it with the power washer. I still do the same on my vehicles now, but use Mean Green instead. Seems to do a pretty good job, just let it air dry a bit to give belts etc. time to dry out before starting.

The key to washing the engine down without ruining your day is to leave the engine running.

Get it nice & warmed up before you do it. (The easiest/bestest way IMO is at a coin-op car-wash(warsh?) place-- they often have an engine degreser setting on the wand/controls.

) Give it a real quick rinse w/water before using the degreaser. Ideally you let the degreaser sit for some time(more=better) but at the car-wash that’s not really an option. The good thing with those places is you aren’t polluting as much(recycled water, they have a drain/sump). (Am I too Californian for my own good? I hear that recycling is “new” to many US states

Yeah, that’s the advice I was given. Sprayed with gunk, waited 10 minutes and high power rinse at the car wash while running… by the way, that image is the “after” shot…