As of December 4, 2021 these signups are closed. All 150pks have been sent to Sebring. Thanks to all who participated, and I hope the seeds bring many blessings and happy harvests to you all!

If there are any leftover packs, they will all go to headiegardens.com to be given away as freebies with @Strayfox and @bodhi purchases to help both deserving breeders and @BIGShoe. 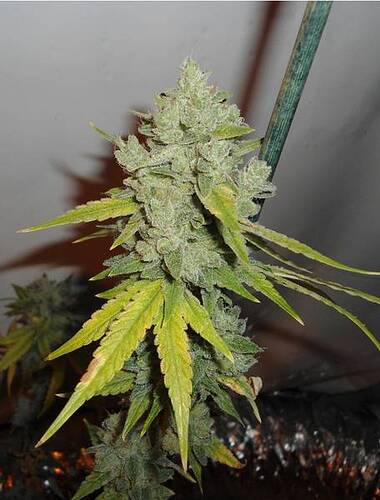 Strain Description from bodhi on seedfinder:

What is green curry og? well its a long story, but basicly it was amystery og that was on lock down and escaped, a friend brought it over in sorry shape along with his story, and i nursed it back to health in exchange for a clipping. its definetly an og, but its bright lime green, more vigorous than a regular og, on the stretchy side, potent, and the smell and flavor are really wild… like smoking og and eating a green thai curry while someone is cleaning the floor with pinesol… no joke! this is not some elaborate story to hype it up, its just a really unique og, and i have no clue what it is, and i have run my fare share.

The snow lotus male is my current main man, he just does not throw out a bad hybrid, he is the star child of afgooey and a x19 leaning blockhead male (no sweetooth traits present) and lets the female traits pass through in a cross while uping the size, frost, and potency.This is a new line that is currently in testing. these are limited pre release packs.

These seed projects were made in an organic biodynamic growing environment with the utmost care, respect, meditation, and good vibes, using the best parental selections from a small but amazing gene pool. may all your dreams come true and all your seeds sprout.

If you have any questions on how signing up and receiving these seeds works, please visit here as we’ve done our best to address them in one spot instead of in every Preservation Co-Op journal.

Note: please show some love, like the thread, comment and engage the discussion. Also, PLEASE add your country next to your username in the sign up to make it easier on the distributors.

Who is your distributor?

Please don’t add more than 50. Please move yourself to the overflow list below. I want to make sure there’s enough for everybody. To those who did, I added your name to the lvl 2 list. - thanks, nube.

Please don’t add more than 50. Overflow lvl 2 and lvl 3 members can go below.

Info about Cheech Wizard and the Green Curry OG.

There is only 1 version of Cheech Wizard. I searched long and hard and definitively showed this to be true in post 298 and 305 at this link: Bodhi seed's Pura Vida Preservation Run (CLOSED) - #298 by PlantShepherd

The Diablo cut of OG Kush is one of the hardest to find cuts of OG Kush for a reason - nobody wants to share it! It’s got a strong lemon peppery smell and tends to grow more towards the indica direction of the genepool. It’s a 7-8 Week plant depending on how it’s grown with pretty close to unrivaled power in the OG Kush family. It does have some lanky limbs so tieing these buds up is a MUST with bamboo poles, etc…
Diablo OG Kush Storm (Riot Seeds) :: Cannabis Strain Info

Diablo OG, also known as Green Curry OG is an older OG csually looking most similar to the original Fire OG Cut (predating Raskal’s release) and our original Banana OG – it has the super lankyness that makes it harder for beginners to grow, but those who master it are rewarded with what I feel is one of the most unique terp combination in the OG Kush world. Super heavy Peppery notes on top of the furniture polish undernotes of the old OG Kush. Diablo OG is hit with the male counterpart of our Roadkill Afghani cut.

The Original Diablo OG clone has always had a special place in my heart. It was one of the earliest OG Kush hybrids I was passed and it’s crazy peppery spice cabinet terps mish mashed with the soapiest of OG Kush makes for delightful notes for any extract artist. All of that crossed to one of the earliest Kush crosses via the Haze Brothers that offers a funky earthy kush tone with only the lightest hint of sweet fruit – not unsimilar to an old Hindu Kush."

Info about the Green Curry OG from https://www.breedbay.org/community/threads/bodhi-seeds-release-info.201345811/post-711753 where bodhi said:

i got a load of infected soil and things got crazy, plus the green curry og has always been a pain to keep a mom, super finicky and slow rooter. i picked up some neem seed meal and ill order up some todes soon…

Also, bodhi said this about Cheech Wizard being discontinued because it was a pain to sort:

there are some cheech left, but not much and my wife hates sorting them cause they are mostly duds, so i think ill just keep them for special projects.

No more likes left @nube but do sign me up

And thank you @nube and @The_Lazy_Hippie

Sounds amazing! Got to the Bodhi game pretty late, so thanks for the work you’re doing making these available.

Thanks to @bodhi and @The_Lazy_Hippie for being such kind souls, making and donating these beans respectively. So here’s how it started out many moons ago when the journey with this cross first began. 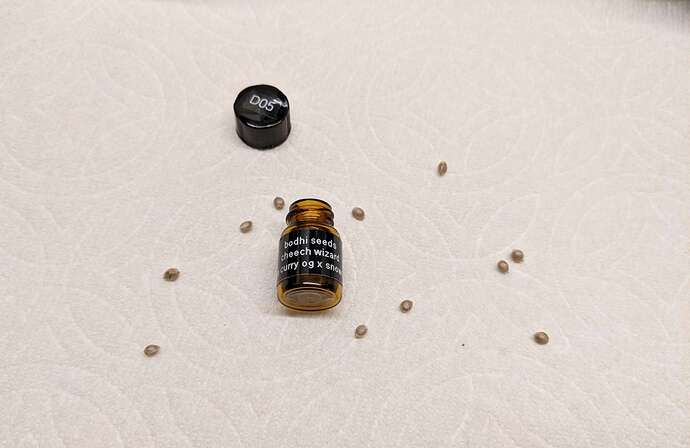 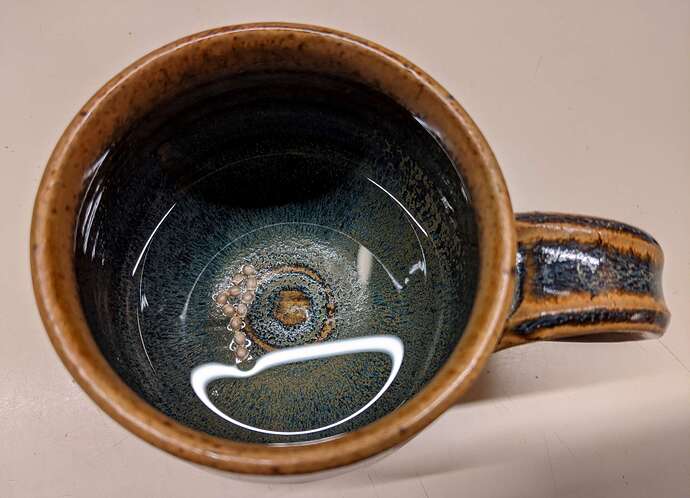 @The_Lazy_Hippie was so stoked on this cross that he donated his other pack to the effort a few days later! 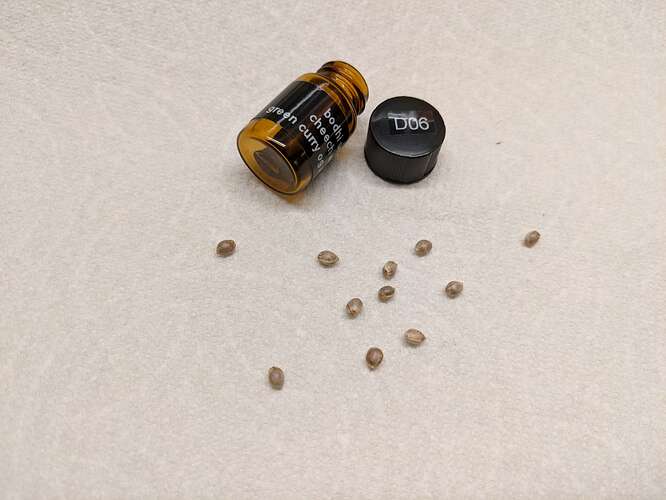 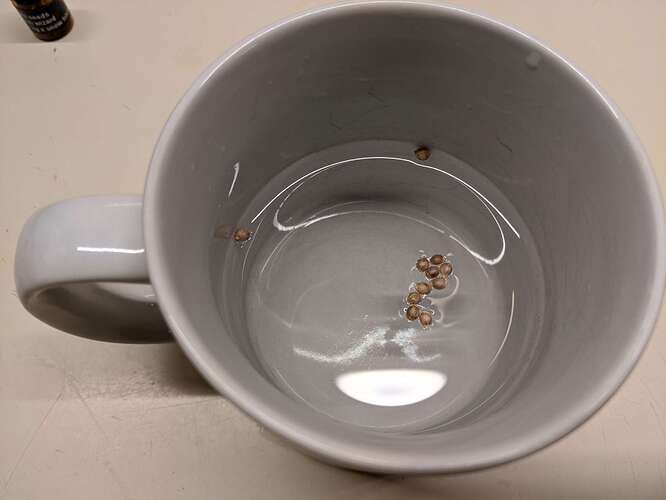 im pulling up a chair for sure

Another wonderful grow being perpetrated by @nube, thank you for taking the time and space to reproduce these. Thank you @The_Lazy_Hippie for making these available.

Awesome! This will be a great run! Thanks for doing this for us!

Awesome Nube. Fun thing to share for sure. Thanks for doing this, i’m pretty curious about green curry og.

I had really good germ rates on the first pack: 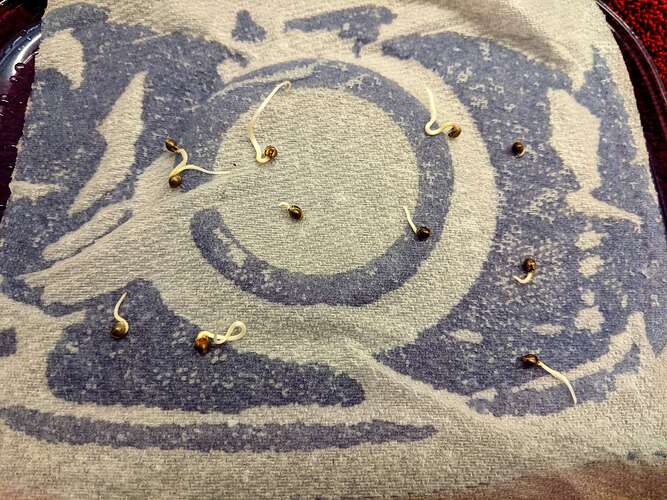 But, unfortunately they almost all developed helmet head. I’m not sure why cuz they clearly soaked and popped just fine, but I had to perform surgery on them and only 4 or 5 survived. I was super happy to have the second pack of seeds from @The_Lazy_Hippie .

Strangely enough, the second pack had major germination issues and I only had a few of them pop five days later. Most were black mush inside. It was no fault of anyone’s, just bad luck with old seeds. And they all took several days to pop above ground. Oh well, that’s how it grows.

So, I hereby dedicate this thread and preservation run to overcoming the weird vibes with this strain, cleaning its energy for all y’all to enjoy!

By the time I was able to take pics of the seedlings, they were on days 12v and 7v respectively. I count from when most of the pack have sprouted above ground as day 1v. This took a bit for each of these… 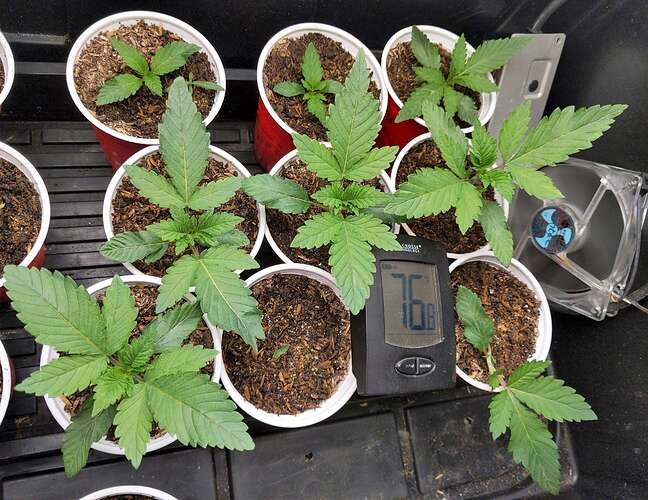 As you can see, we ended up with 8 pretty healthy seedlings and one slow starter. Because of the issues I had with germinating and planting, there’s zero chance I was going to toss the little lady. Her slow start was my fault for a botched attempt at helmet head surgery…it’s hard to do sometimes!

Here they are at day 20/15. Doing pretty good, and I was just real glad the little one survived. Its stem collapsed and had to be held up with toothpicks, but it mader! It had a strong will to live, and I’m glad I rewarded it. 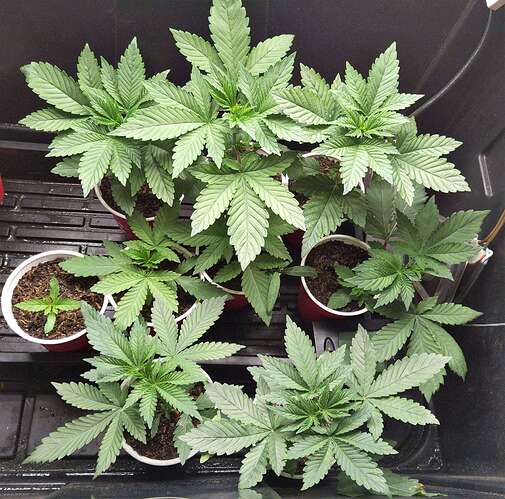 Amazing story, this plant really wants to live!! Thanks @Nube and @The_Lazy_Hippie…

Awesome!! Thank you Nube for sharing, preserving and showing us a little more of Bodhi’s work.

And thanks @The_Lazy_Hippie for the seeds!!

well, i finally get in on one of nube’s bodhi preservations.
i’ve been reading all the cool strains. now i get to play too!

Thanks for taking this project on. I’m gonna follow along and learn a bit in the process. 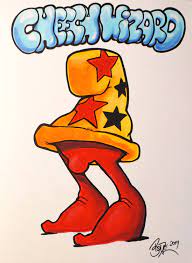 Good deal! Thank you @nube and @The_Lazy_Hippie! They’re looking good! Been trying to get something with the snow lotus in it for awhile now.

Thanks @nube for doing the hard work of making these available to everyone, super badass of you.

Also thanks @The_Lazy_Hippie and @bodhi for making these available to be reproduced!

Those last vegging shots look nice. Looks like a bunch of nice bushy little plants with nice tight internode spacing and fat serrated fan leaves. It almost looks like you could saw some logs with those serrations! Come to think of it those fat leaves make me think the bud might get me sawing logs too!!

Thanks @nube & @The_Lazy_Hippie for making this happen

I love green curry, and an OG with green curry flavors sound just my speed. Super pumped to follow along