I haven’t posted in a while and boy has it sure been weird the last few months, if you’d like to read a long winded post about my setup you can see that here:

I’ve got four completed grows under my belt with this setup, and I keep learning each time, it’s great. I’m finally at the point where I can sorta get caviler about bending stalks and potting this or that, but not good enough to get blindsided by something dumb like adding too much nutrients or forgetting to water!

I’ve even gotten away with two clones! So far I’ve had four complete grows from only two seeds, and what I’ve realized is that I’ve got way too many Blue Mystic Seeds lol!

Oddly enough my first grow was the biggest yield I’m chalking that up to beginners luck!

Maybe I included too much stem in the first trimming heh! Anyways the setup seems to consistently get around an ounce and a half of flower.

Anyways, I had a freebie seed from where I ordered the beans from, and I decided to give it a go in the cab just to see. I’m getting a little bored of Blue Mystic, and oddly enough the bean I planted was an Autoflower to boot.

The freebie is a Blue Dream Autoflower from Humbolt Seed Co I think, that’s what it said on the vial it came in!

One thing I do need to do is take better notes! Because I can’t remember when this lil bugger broke ground. I set the seed in a damp paper towel, stuck it in a ziploc, then magneted it to the back of the fridge where it was warm. After about 2~3 days it cracked, and I jammed it into my growbag: 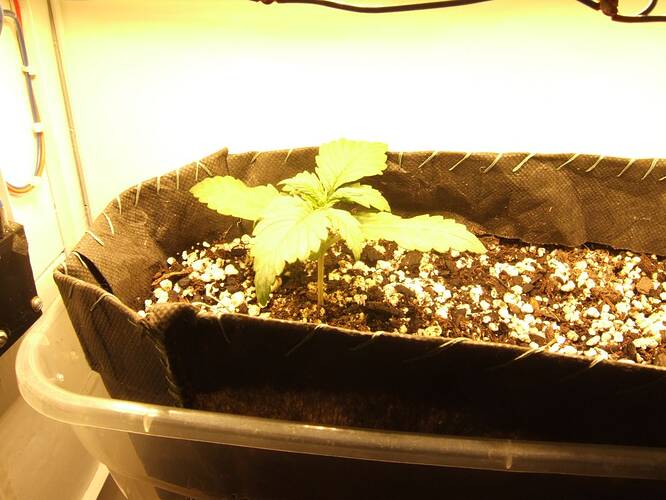 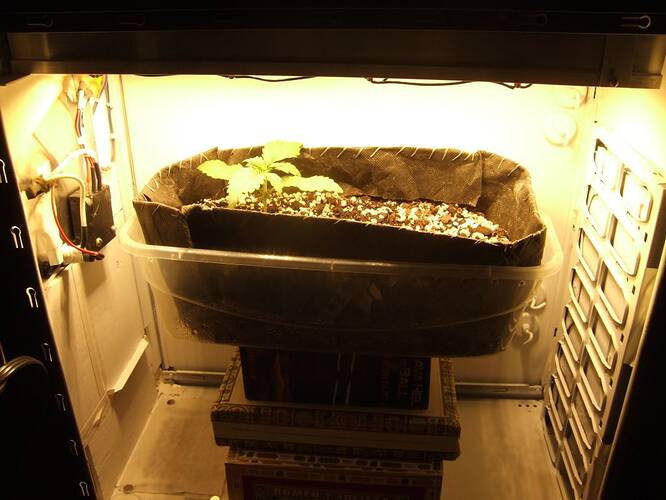 This has got to be around April 10~12, the clock in my camera got reset because the batteries went flat on me.

Now I know the appeal of autoflowers! No veg time, no fiddling with the light schedules! You just dial it in and water and tend!

I initially had a tiny panic attack over the decision to top the plant, but from what I gathered, you don’t really want to chop on an autoflower since it rushes into flowering so quickly, so I opted for HST/LST instead.

I stick the seed in the far end of the grow area, then bend the whole trunk down to the other side to send the side branches up, and the main cola ends up righting itself at the opposite side of the tub.

This allows me to take advantage of the Christmas tree shape and maximize it for this grow space: 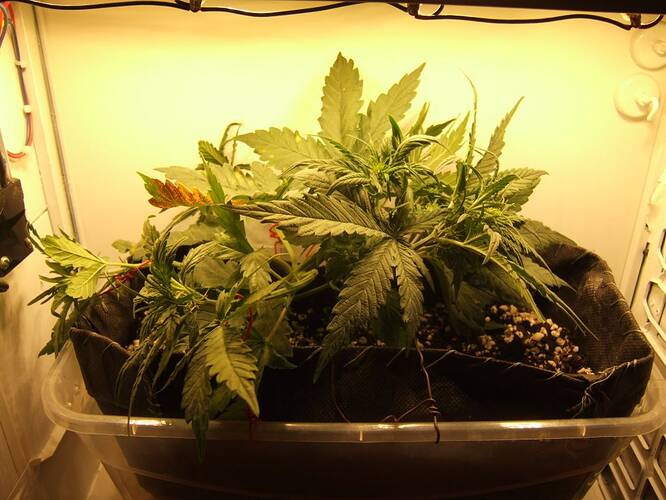 The Auxins do the rest! All of the side branches then come up, then it’s time to arrange them for max light surface area: 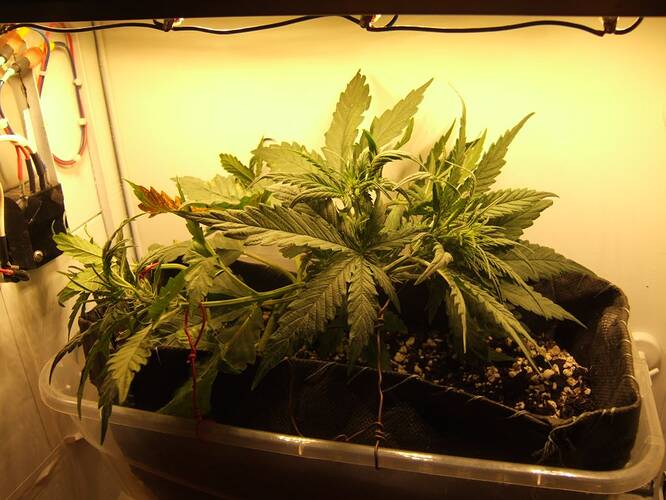 The next trick I’ve found is not to let that Christmas tree to re-establish itself. So then begins bending, tying, and re-arranging the stalks/calyxes so that they’re all a uniform height, and are spaced optimally for light and air flow.

I punched a bunch of little 2mm holes all around the dollar store tupperwear tub the growbag is in. These are perfect anchor points for a bunch of 22 ga solid core insulated copper wire. I love the small gauge solid core copper wire, because it bends easily and doesn’t jab your fingers like that horrible steel flower arranging wire does!

I’m on a 18/6 light schedule from seed pop, and we’re just feeding it Megacrop, and Megacrop’s Cal-Mag. Now I did mess up somewhere, I may have over-nuted or possibly lowered my PH too low 5.4! Because some of the leaves have brown burnt patches. I’m leaning towards low PH/nitrogen burn, but who knows. The next thing I need to get straight is my water chemistry / measurements. I’d love to have a custom spoon made which would dispense the perfect amount of megacrop for a gallon of water but I have to get my act together and just measure accurately with SIMILAR units. I’m converting between strange units and it’s just not any way to run a railroad.

Fast forward to today, and this is where I’m at: 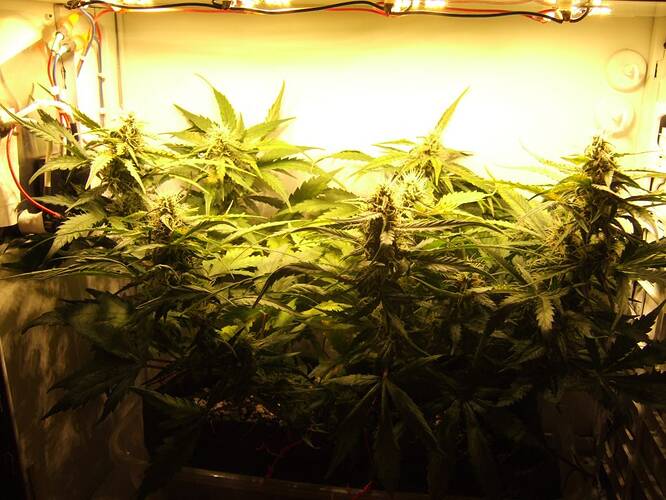 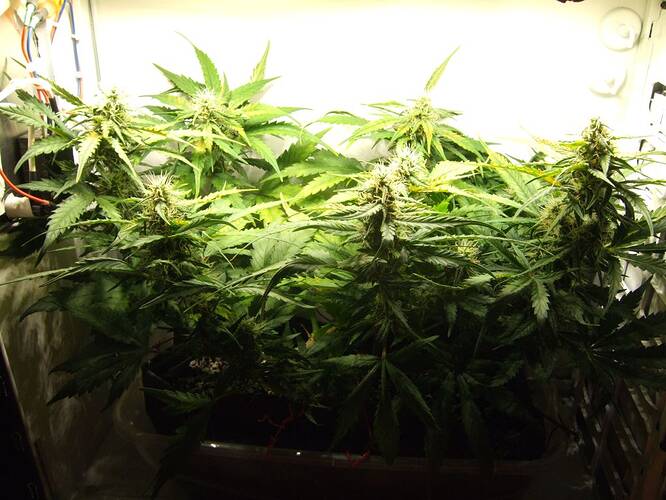 Blue Dream really is a Dream to grow! It’s literally on Autopilot! I’m thinning out the dying fan leaves and getting rid of any fan leaves that are in the way of big colas to make sure the bottom has good air flow. I found that the exhaust fans up top are enough as long as you don’t let a thatch of fan leaves plug up the grow space. Once they get to a clumped density, that’s when the humidity spikes in areas and the whispy webs of mold can start to show up!

Here are some of the flowers, you can see some of that inner leaf scorching I was talking about earlier: 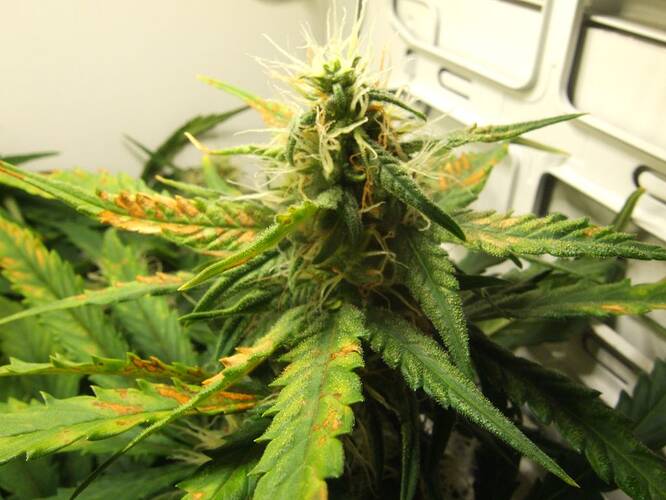 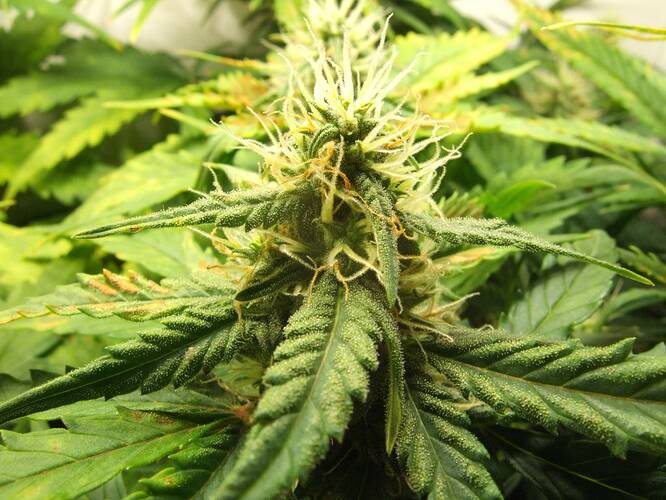 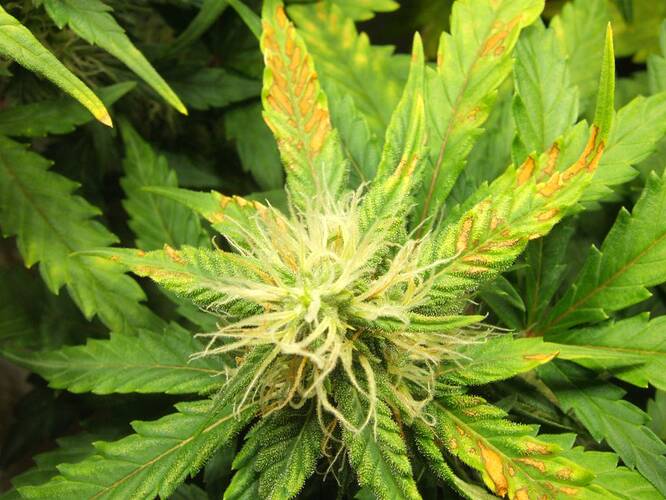 I want to say it popped in earnest on April 8th or around there, so I should be getting ready to harvest in the beginning of June, I need to crack out the binoculars and see what the thrichs look like!

Now I’ve gotta say the smell difference between this and Blue Mystic is light night and day, Blue Mystic smells like an AK47 skunk compared to this thing! It barely has any smell at all. I’ve noticed that when the plant goes from light to dark, there is a small burp of turpines, so something about the lights going off, and half hour to hour is when the plant stinks real good. Then the smell drops back off as the charcoal filter can actually compensate.

But I was kinda shocked of the smell difference! Gotta love Sativas!

I’m going on the light end of the recommend nutrients from Megacrop. I’m using 4 drops of super thrive, 4g~5g of Megacrop and less than a gram of their Cal-Mag supplement.

I would have tried the Fox farms nutrients but unfortunately mold started to form in them, every time I poured them, rafts of mold would come out into the container I was measuring in. You can’t give mold any kinda opportunity where I live. I like the idea of Megacrop anyhoo, just gotta get my measurement snack on!

I’m shooting for PH 6.2 of my nutrients/water. The temps are getting high since we’re getting close to summer. I’m guessing the cab is around 82~83 degrees F. A little high, but not blazing! Humidity is low. And that’s teh other thing about Blue Dream vs Blue Mystic, this thing drinks a LOT of water. I can usually go about two whole days before watering again, with Blue Mystic it’s usually four! The transpiration rate is much higher with Blue Dream it seems.

Here are some more shots of the flowers with scorching! 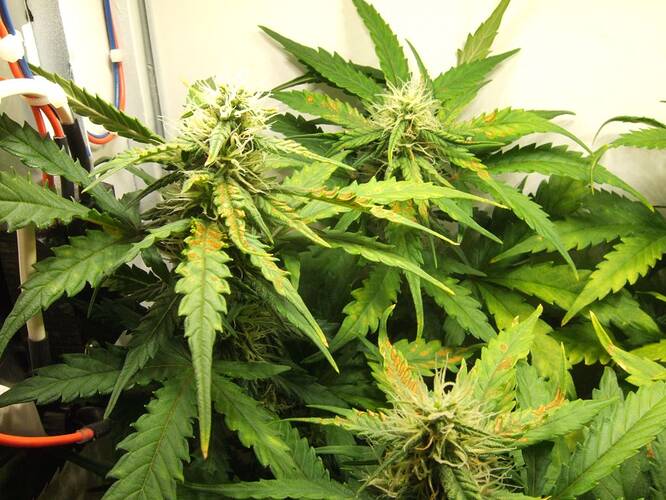 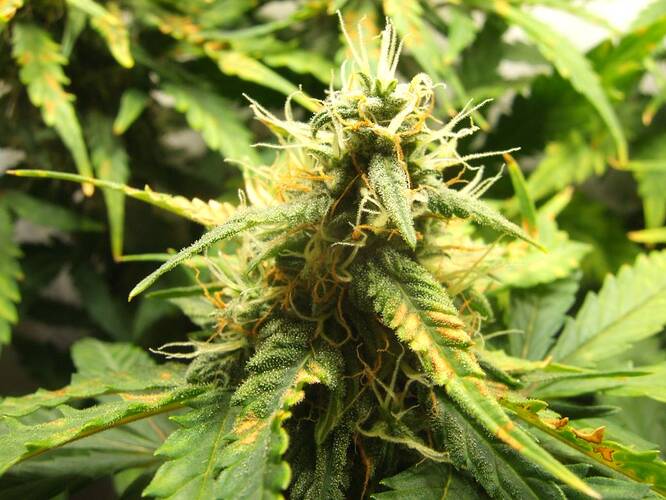 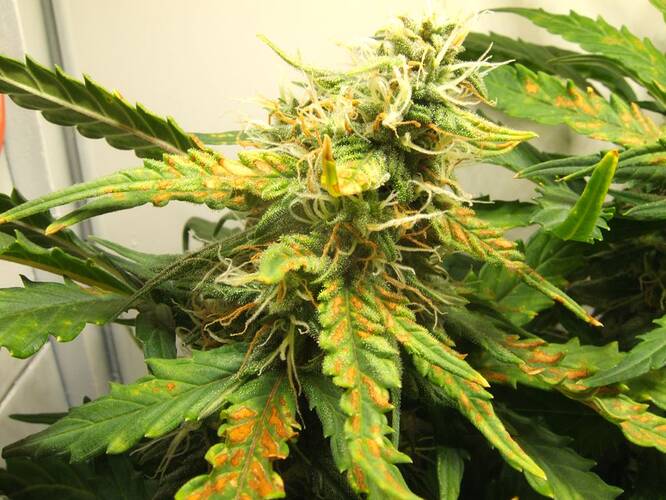 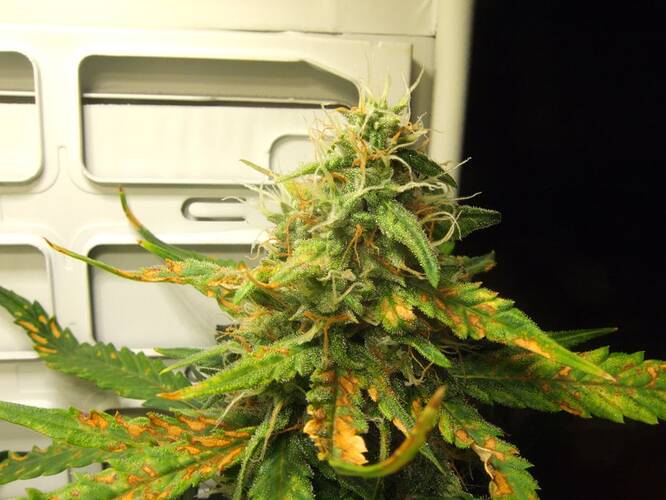 Looking good, you’re getting some great harvests from that space. It’s cool how you hacked the store bought LEDs also…I always wondered if that could be done. I don’t understand how they’re powered though, all by one supply or do their have their drivers built into each?

You can make a liquid solution of mega crop and it’s much easier to work with. I dissolve a bunch in a 1.5L water bottle, then use that concentrate when I’m blending up nutes. Mine works out to 6ml of concentrate being 1.2 grams of MC, I can’t remember how much I dissolved to make the whole bottle I think it’s around 350grams.