Hi OG family!
Back to growing after 10+ years, I figured I should share this experience with the community

First thing first, let me introduce you my setup:

I cannot wait to see it

all the best and welcome

, but IKEA use to not have shops there

. Better pull up that fan or you will fry the seedlings

. Looks you had a great time building that setup

, willing to see how it works …

Thanks guy for the warm welcome

Chains are the easiest/cheapest solution I found to be able to adjust the fan up and down. Same for lights, I fixed it with Velcro so I can move them, I think it’s better for a first grow to leave some room for adaptation… 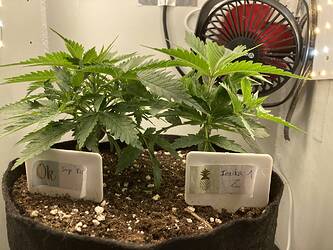 My plan is to top both of them, keep the top crop to make clones and put the clones to flowering straight after roots appear to know the sexes. I want to get rid asap of potential males (not sharing my females

), also I intend to keep the clones flowering till harvest (if females) to have an early sample of the final product

I might also try to turn lower branches into clones, then mother plants, if I’m happy with them.
Already 5-6 nodes and quite bushy/not stretchy, I wonder whether I should wait/make them stretch a bit more before topping… what do you guys think?

I’d probably let them get a bit taller so you can get a good sized clone.

Cool setup, what kind of carbon scrubber are you using? Also I’d love to see a pic of your lights.

welcome aboard. I started with SGL this april. 192 board. it was great fun!

@SaintAliasKnife thanks man, I’ve been following your adventures both here and on the SGL discord server, I’d be pretty happy to have the same results

@beacher better than a picture, you can find all the info for the lamps/global SGL setup here: https://shop.supergreenlab.com/
Carbon filters are DREHFLEX AK47, can’t speak for efficiency yet as only flowering will give the truth

Cool thanks. Those little panels are awesome, you could use them in all sorts of interesting ways.

Nice job on that cabinet!

This will be cool to watch.

That cabinet is boss! Look forward to seeing your grow!

Thanks guys!
I think the building part is almost as fun as the growing part

Here is a shot of the app screen in case you’re interested, it displays temperature, humidity, vent and light power (in % of max power), with the ability to switch light and vent power within the app.

Some news from the battlefront

Keeps growing nicely, took off a few leaves every other day to help air circulation and focus the effort on branches. Still not stretching a lot (/at all), so waiting on the good moment to top. Maybe in 2/3 days it will be okay

Below is my topping plan: 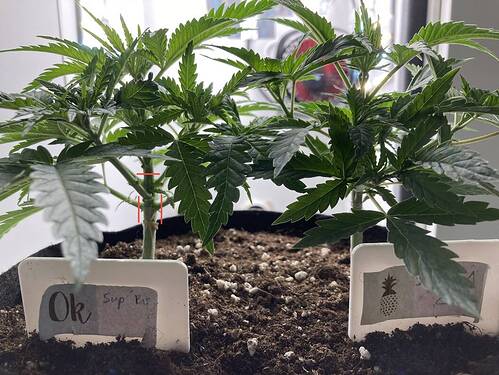 Don’t know if the marks are visible enough on the picture but I’d cut the top after the 3rd node (counting from the bottom) and also the bottom 2 branches that develops enough to make decent clones, but that I don’t want in the way of the 4 main branches I’m keeping (nodes 2/3 right now) during flowering.
Would you think is too much to take off at once? Maybe first the top and after a while the lowest branches?
Also would you recommend to make the cuts before or after watering? If it has any influence at all…

Welcome back to growing @DHB, I love micro grows. I have done some myself in the past but this is super tidy. I will be watching

I think a little while after a watering after they look lively again is a good time to cut. I do not know how you will go cutting that much off at once. It should survive but it might slow down growth for a bit.

Thanks for the input @BudSy

Actually up to now the plants never looked less « lively », even if I was very cautious with watering in order to avoid overwatering (I find harder to realize whether there is too much water with fabric pots as water doesn’t go out from the bottom of the pot).
Also I finally did the topping/cloning session yesterday 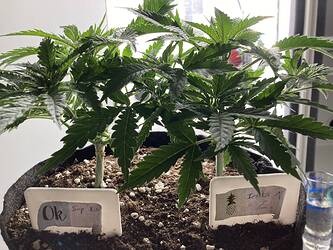 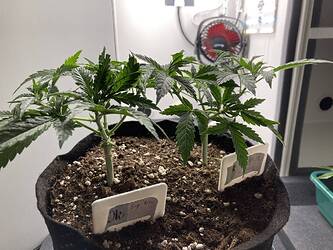 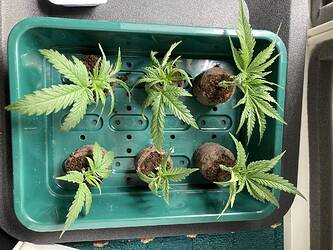 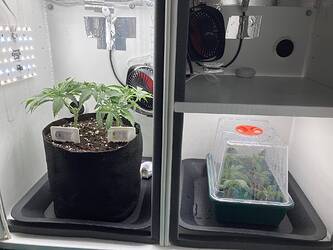 I followed my plan (using Clonex and peat pellets) by topping the main « trunk » and also taking out the bottom branches (so 3 crops per plant in total) to only keep the 4 strongest branches. Now I just have to pray for everything to turn well

Will see what happens in the next few days/weeks… 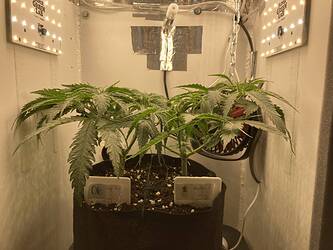 image2016×1512 277 KB
The plants seem to have reacted well, I also removed a few leaves as with 4 “trunks” per plants it’s starting to get really bushy

I’ve slightly moved up the side lights too to make them stretch a bit more. 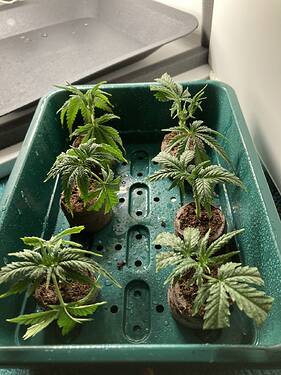 image1512×2016 375 KB
The crops still look healthy, even if I don’t see roots coming out yet. I’ve been following Clonex recommendation by water spraying them every 2 days with the dome closed, and now I’ll start to gradually open the aeration holes on top of the dome for another week.

Also I’ve been thinking about changing my plan a little bit, meaning keeping all the clones in veg (if they survive) and rather put the main plants in flowering sooner than expected, maybe in 1-2 weeks from now. 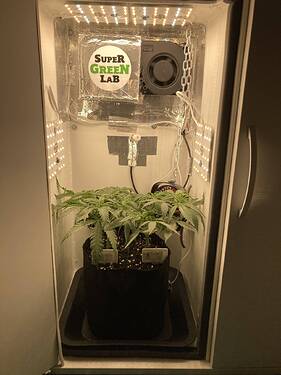 image1512×2016 283 KB
The main reason is I have a quite small space and I don’t know how much they will stretch during early bloom, so I’m concerned 8 main colas might be alot for this space. Of course the harvest will not be “maximized” if I make them bloom that early, and I might have to deal with a male plant to take out from the main space as I don’t know their sex yet. But I guess I’d rather do that than letting them grow too much while waiting for the clones to be ready for flowering/sexing, at the risk of overcrowding the main space (leading to moisture risks, light burns…).
What do you guys think?

As I can feel your impatience to know who’s gonna die on the next episode, I can’t help but release it

LEFT SIDE everything is still going well: 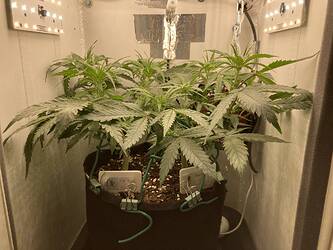 I did a bit of training for future buds spacing, and took off a few leaves every few days, mostly on the center of the canopy to improve the exposure of secondary nodes and keep outside leaves to gather enough su power 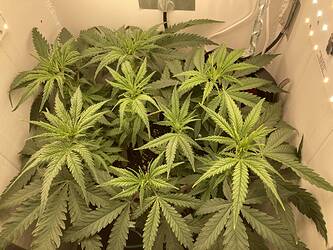 I noticed a very slight yellowing on the end of some leaves of the right plant (remember the 2 plants are 2 different unknown species), what I guess should be linked to nutrient (slight excess?), while the left plant looks like she could handle more

).
I’ve been following the recommendation of @GreenleafNutrients for the quantities.

A couple of lower fan leaves on the left plant kind of showed brown areas though, and after a few research (this forum, growweedeasy…) my best guess was a calcium/magnesium deficiency.
Also acknowledged that the little “balls” in the Megacrop new formula are (apparently) Ca/Mg, while the powder essentially contains the other nutrients. So I paid a bit more attention to the balance between both (not so easy with so little quantities) and the problem disappeared. Or rather it didn’t reappear, as I ended up taking off those leaves

Moved the side lights a bit higher again, this time to prevent light burns.

RIGHT SIDE, the real battlefield 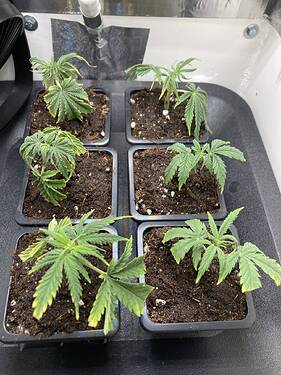 I decided to replant the peat pellets in small pots with soil and a tiny bit of nuts in the water. I wasn’t really seeing roots popping, but a few signs told me it might be time to make a move

Generally, it seems the crops where I kept more/bigger leaves reacted not so well compared to the more “naked” ones…

Also, when transplanting I realized the worst looking clones were the one with the pellet almost completely dry

For now I find the peat pellets very hard to work with, quite hard to put/keep at the right humidity, while the outside “net” makes difficult to figure out what’s going on inside…
First I had a few germinated seeds that didn’t make it through once in the pellet, and now the clones seems to struggle a bit

Obviously I don’t master it yet

LEFT SIDE, put to flowering within 3-4 days while keeping spacing/trimming the canopy every few days (only during late veg/early flo)

RIGHT SIDE, save the troops, soldier

5 days after switching to bloom: 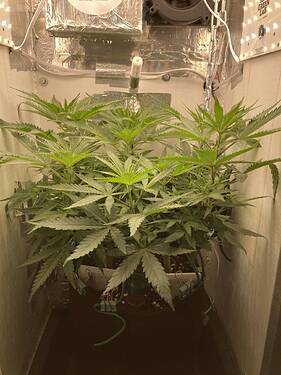 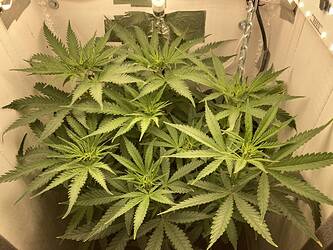 Stretching sweet, the 4 branches of the left plant are roughly the same height, while on the right plant 2 are a bit behind. Maybe because they have been trained a bit more (/lower) than the others and thus do not get as much light

Also even if it’s still early to tell for sure, I’m afraid the one on the right is a dude: 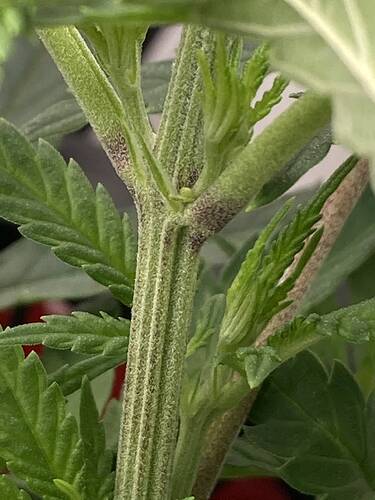 No pistils and some kind of small ball looking like a male preflower, unfortunately.

The one on the left is most likely female (a some white pistils showing up): 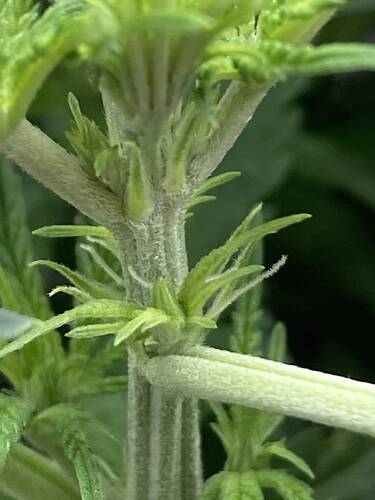 I’ll wait a few days to be 100% certain but if confirmed I’ll need to get rid of the mister asap, not sure if I should just cut him and let the roots in the soil or find a way to get them out/replant the other one in a new pot…

6 Likes
Week 1 flowering: too late to transplant?
next page →