.Worried cus my plants r not done and it's getting colder

Out Door not done, 40 min North of Ottawa, Cold temps, How much longer can I push them by keeping them outdoors? They look like they need almost until the end of october. Bringing em indoors…like they have insects I don’t want in my house, I could put them in the crawl space but they are big and it would be a pain , i dont have thermal blanket’s. i suppose I could leaf blow a pile leaves around the fabric pots only i worry it may spread spores. Am I screwed or has anyone pushed there plant through the cold days? Thursday is -3 degrees for me locally. Thoughts?
It’s a Bruce Banner / W Widow cross so 2 highbreeds.

Poly domes… have even used sterno to keep from freezing! Well south of u though…good luck!

Those seem very bulky, even with free shipping seems like that option would be costly. If cost was no issue i would build a green house around them , cost and laziness are big factors in all my problem solving solutions. lol Thanks anyways.

As long as it doesn’t freeze in the daytime for long periods, you can make it work, but its a huge amount of work. The system I developed was using christmas lights. You have to use the non-led, classic incandescent style–the big bulb type works especially well. I would wrap them around the plants very well, with good coverage, and leave them there permanently. When a freeze would come, I would cover the plant with a bed sheet, and turn the lights on. It never failed, though on nights it would dip into the low 20s or even teens I had to get extra creative and I’d put a crockpot full of water next to the plant and then cover it with a sheet and run it overnight. Gallon jugs of water can also store a lot of thermal energy, so I’d fill them with super hot water sometimes and surround the plant with them, then cover them with a cloth. It’s extra work, but replacing the jugs at around 5am helps insure they make it through the snap cold that happens between 5-7am.

You can get creative. I had an acre of plants to protect (not cannabis), so I had to get creative and use non-breathable coverings, too, which is sub-optimal. I’ve used everything from leaves, to plastic bags, sheets, painters tarps, to parachutes to cover an entire platform with a space heater under it. I even experimented with wet cloth coverings, which worked super surprisingly well. The key is trapping/introducing as much heat as possible while allowing maximal moisture exchange.

Edit: Just saw you said, -3, which is 26f, I think. You can definitely hand-hold your plants through that, no question. I’ve walked superhots, brugmansia, and mimosa hostilis through single digits using these methods.

Not talking about hard poly, think about the rolls of poly cheap at big box home improvement stores, duct tape, think about flexible tent supports. If u can get them indoors, do it, if u can’t do what u can…-3 C is pretty much freeze. Good luck!

In so. cal and Fla, look into their citrus saving tech…

lol I cracked up on the Christmas lights part , very creative and a hilariously desperate. That was a good read. Did you have luck with leaves? compost heat what have you? I have those.

All about how long temps are below freezing to save, to finish if temps are low need to create greenhouse effect. Don’t know how big an area u have to deal with, obviously there is a cost/benefit computation to be made. If feeling is no matter what u do they won’t finish, then don’t waste the tricks u have, extract…hash, oil, whatever…

That is Trichs, duh…

my budget on this crop was small, I have all kinds of money to spend indoors. at this point i am just praying. Eudaemon is correct 5-7 is tough , I feel it from inside my home, and i am pretty sun blocked many hours a day . at this point with my min resources I may just have to jam them into my crawl space in the wee hrs of the morning.

I had great luck with leaves. I wouldn’t worry terribly about mold spores; mold spores are already covering all your buds, even the food you eat. The key to preventing mold is preventing the conditions in which mold flourishes. That means keeping moisture down and air exchange up–leaves are good at this, far better than poly, which acts as a moisture barrier and traps the nights transpiration moisture deep in the buds. I am not saying not to use poly or that poly is bad; rather, I am saying that leaves aren’t as bad of an option as they seem at first glance, from that perspective. I’d like for you to trap some heat in those leaves though, even if they’re gallons of water filled with room temperature water. It makes a difference. You’ve gotta be quite generous with the leaves to successfully use them as insulation during a hard freeze, though. I’m talking fully buried.

ow long temps are below freezing to save, to finish if temps are low need to create

What Sasquatch said is right though, it depends on how long/sustained the freeze is and how often they occur. If I had two weeks solid of hard freezing temps, no way I would try and nurse my flowering cannabis plant through; I’d harvest early. Even using covering and protecting/handholding the plants, they have a way of getting stressed through the process if its an extended affair.

Can you build a quick greenhouse? I kept a plant going thru mid October here in the Catskill mts. I made one for 50$. 30 for plastic and a few 2×4s. Took 30 minutes or so to make. I put a small electric heater in there, but dehumidifiers produce some heat, too. By mid October, the plants slow down the ripening process due to lack of sun, and a greenhouse becomes necessary even for daytime temps to be high enough.

im z3b n. maine and I’ve kept them outside un protected down to 25f with no damage to colas. fan leaves will get zapped but the colas and sugar leaves will be ok. like what others have said , as long as it warms up above freezing during the day you should be good until the end of the month. mine in my greenhouse are still finishing as well. i keep the side doors open with the fan on , even on cold nights to keep humidity down and they’re still rocking’! we’ve had 6 frosts below 30f with 2 that dipped 24-25f. a ol’ timer thats beens guerrilla growing here for 40yrs told me he’s had some out until early nov with no issues. i think thats really pushing it here but late oct. is very doable where your at. my buds just starting to cut his we started indoors in late april, put out mid june and they are 95% sativa! no protection whatsoever.

thanks this is giving me hope, strain after checking said 8-10 weeks, I thought it was 8.

Have had mine through 3 frosts of -2 to -4 and as has been said fans are dropping like flies but the buds are ok so far and although I haven’t checked every one I haven’t seen any signs of rot at all.
I’m hoping for a week or 2 would be great but it’s pushing it here in Manitoba. 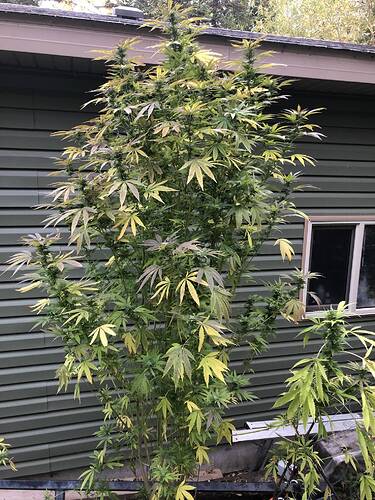 Curious. Are your plants planted into the ground of are they potted?