Anyone know where I can get rks

You need to have a connect to get something like that. People that hold it in Humboldt have it on lock down. So, your best bet is road island or southern Maine.

Mr Nice released a New Skunk that supposedly holds the RKS traits. I do not know that those traits are present for sure, but I’ve heard some good things.

Good luck on your search!

You may be able to find some RKS in the Ancestral Skunk #1 seeds released by Breeders Retail. These seeds are an open field reproduction done by Rob Clarke and Sam with seed stock brought over from CA. This was before Sam further selected for the sweeter skunk phenotypes.

Which one is that brother?

Hey brother,
It’s literally called New Skunk.
They are doing a couple auctions of it per month in the New Releases section.

Not much info out yet but they make a point of saying it’s sometimes called RKS in their strain description.

Once I see the roundish light green cabbage type buds with large bracs with very few hairs and the skunk smell. That will be a day I blow all that I have on them seeds. Really miss that taste and smell.

I’m not positive but I think bodhi did a RKS…

I’m not positive but I think bodhi did a RKS…

Lots of hybrids, but unless something has changed not a pure. I hold a RKS dom plant called Hippy Slayer that I found several years ago which is all over Norcal. I sent it to B, and I know he has also played with it a bit and created a few things. Up until recently everything that I have hit her with has gone weird and very finicky, but an accidental cross with a Starfighter recently created at least a few stellar plants. I may try cubing it and seeing if it comes back with any road kill pheno’s.

I’d certainly like to see it come back now that most don’t have to worry about that crazy smell she posses.

Ah the elusive RKS, chasing that long gone flavor of yesteryear, aren’t we all. I know Med-man has a RKS, he says in the description that it’s not dominant, but if you search through a couple packs you will find a funky skunk pheno. Again I don’t know from experience, this is what he states in his description.

Yea the Slayer is 1/2 RKS, ol finicky bitch she is…I was wondering if any of Jim Ortega’s RKS was still available, from what I understand you have to be in deep with the N. Cal boys to even mention it, here is my Hippy Slayer about 1/2 done 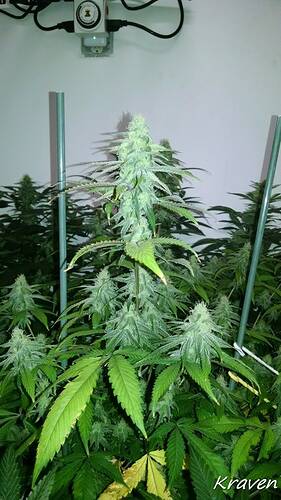 I have been gifted a rks clone from a friend who found a few bag seeds a few years ago from some really good weed he bought in montreal, he wasnt sure what it was but this is the classic dead skunk smell from the past!

I also thought I’d never see that again, skunk weed is what my dad grew in late 80’s and 90’s and even back then it was starting to be rare with all the new strains popping up overnight people stopped growing that stinky skunky rks…I used to steal a few buds from my dads stash and bring some to school to smoke up my buddies and boy did I leave a skunky trail wherever I went lol

My buddy has been growing it for almost 2 years and she will somehow produce a few seeds each time, shes slightly hermy but nothing serious, Ive grown it 3 times so far and never got any seeds…Shes a bit finicky, a bit stretchy at first and has dark green leaves with wide fingers, shes a bit more indica with alot of couchlock but theres definetly some sativa in there, after the stretch she fills in nicely and has average yields of frosty stinky ass reeky rks/burnt rubber/sour smells, grown outside shes a bit less stinky but looks identical to what my dad used to grow in 90’s, a bit leafy but still very nice. This stuff stinks worse then anything else I have.

do you happen to have any pictures?

I’ll take one tommorow for you, I have a female in veg right now and I also have a few onces of buds I’ll post a pic soon.

I have a female seedling actually, I was gifted clones through out the summer from my friend but lately hes been starting the seeds that he finds in his buds(barely any) any ways he has a mother plant from the original bag seeds he found, I asked him for a clone and he gave me a female seedling lol Looks identical to his mother plant and has the rks smell already in veg if you barely touch her…I also have 2 seeds my friend gave me from the last batch of rks buds he harvested, I’ll germ those this weekend with the pack of ak-47 and the pack of afghan kush I just received and keep you posted, I’d love to find a male but so far I doubt that will happen from a self pollinated plant.

I’ve recently bred the last rks clone he gave me with 2 different blueberry studs, those seeds are from mid september, I’ve got about 12 of those seedlings growing right now but chances are the blueberry genes will give that reeky skunk odour a more sweet/fruty smell, blueberry is very dominant.

what about reserva privada RKS feminised? or is that not the original

what about reserva privada RKS feminised? or is that not the original

I have not tried this one, but being as Road Kill Skunk is already a freak in it’s self, no way I am attempting a femmed version.

An that sucks meaning u breed the last two rks to get rid of what so many ppl want ? Why