So. …what’s up og. I figured I’d start a new thread dedicated to my obsession skunks. Apart from the bodhi offerings of his rks type. I have some mr nice gear that I think holds the ingredients to make a decent/respectable skunk. Something 90s reminiscing. So I decided to devote my small 2x tent to my personal mad scientist/head stash place. So here’s what I’m starting with missing a few devil. That I’m waiting on. But for the most part i have several sk type genetics that will have to go in cycles. 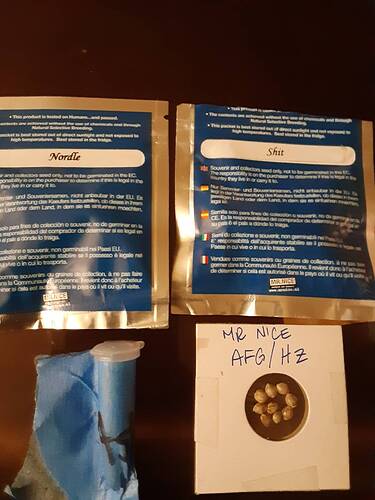 20210110_1814071224×1632 172 KB
. The blue pk is ash. So for awhile now everyone has been looking for the old skunk, even if not the rks…the old super skunk, like the old mass super skunk. So over awhile over been hunting through some old mr nice fourm threads and gathered a good bit of info…from old Neville post. To out right asking shanti direct. The genetics of the old skunks are indeed still around. It’s just gonna take some work to find the one we all oh so remember.

Screenshot_20210110-173049_Instagram720×1560 177 KB
. Afghan T…Ortega 15…super skunk, ultra skunk, nordle…call it what you want but it’s the same. Afghan t (mother of super skunk) had a sister Afghan s. Both were findings that Neville found in a batch of seed he got from jim Ortega. Afghan t is the culprit behind the super in super skunk. Neville believed that maple leaf was the afghan in skunk and not the afghani 1 that skunkman says…Any who…Afghan t is presumed gone…but lives on in her offspring. Which shanti has told me so far is Afghan haze, and nordle, devil aswell from what I gather…nordle is Afghan×sk1 with the Afghan being Afghan t , which as of today I found makes devil…a Afghan t bx…being its Afghan t ×Afghan/skunk. I will try and locate where Neville explains that if you cross devil to ash or nordle the old Afghan t throwbacks will eventually come up. I’m running and probably increase shit mainly because It’s the Afghan dominant sk1. Mom×a sk1 male. And thus o believe it is the sk that Neville used to make ss. Shanti says its easier to find Afghan t types in nordle rather than in Afghan haze, the hazec in the cross tends to dominate. Tho it would be easier to identify a Afghan t leaner as the parents are of such difference. So I’ll be starting some nordle, shit, and devil and probably cross, and increase them all. For passing out and further searching stock.

Nice project! Are you going to try and look for skunky terpenes in the Mr Nice line and hybridize/select those out until you have something repeatable? Or are you going to keep the lines pure and just try to select them toward skunk terps?

I will be keeping the increase pure and also selection will be made for skunk Terps to make certain crosses , and possibly some open pollination crosses aswell. I’ll have to iron out more as I go. I also have some ancestral skunks f1 and 2. And a few super skunk crosses from farmer joe and ak beans.

I’m only getting fruity smells on the Ancestral Skunk (mostly guava type smell). I think the RKS lie was put on the Skunk line by Sam, to make more seed sales and RKS fame (egomaniac).

What I’ve come to find out. It very well could just be phenotypical. For instance Afghan t, and Afghan s, are sisters…but afghan s is stronger, more sweeter, and berry/hash in taste and smell. That’s pretty different from her sister Afghan t more pungent, acrid, skunky…what Neville calle the skunk architect.

Good luck in the hunt.

Yeah I got nothing close to RKS and it certainly didn’t have a powerful smell either. I also don’t believe it was a pre Dutch skunk line either. Seemed more like extra stock from the 90s that never sold and he got tired of storing them.
If you liked the 90s sweet skunks and funky cheese smells they may be a great place to look for them, but nothing truly skunky about them.

Many blessings I’ll be following along for this hell of a ride! You had my interest with skunk,

Being a Mass native it always gives me those tingles to even think about the stuff. I will say though I’ve never dug through those treasure troves of info like it seems you have. I like where this is going.

Could be, I dont really trust what sam said. So they were selfing back when skunk was being worked?..like in the 60s…selfing…?. I’m
More believable in nev. The Afghan he used with skunk made ss…sams afghani has been used with sk by many…no one finds the old skunk traits…hmmmmm​:thinking:

Screenshot_20210111-080954_Chrome720×1560 478 KB
. As I continued looking for saved info. O realizes that nl1 and possibly all nl are also in the family of these maple leaf. Aswell as big bud and kush 4. So I guess I’ll be adding mel’s the north, ak beans nl1(nl1×nl5), also trying to get a handle on Nev’s nl1/hp… which I have. In the form of headband ×lazydog. From bob Hemphill. Lazy dog is pnw hp/nl1. I believe if I cant get a good bit of the maple leaf genetics…and put them with the different skunks running around the old stuff is bound to pop up. Which to me makes the uncle fester sk 18.5 slot more interesting, and shit aswell as it’s a pure sk with a Afghan leaning mom.
7 Likes
RocketBoy January 13, 2021, 4:20am #13

Nev’s nl1/hp… which I have. In the form of headband ×lazydog. From bob Hemphill. Lazy dog is pnw hp/nl1.

that’s a bit of a stretch there isn’t it?

What do you mean

I dont, but it out there