This is a big step for me, first post in a grow journal, feels kind of like giving a speech at your best friends wedding, you don’t want to let them down. There are so many growers on here I admire and aspire to.
Big shout out to my brother @CrunchBerries. If it wasn’t for our collaboration on ideas and tech I would never have made it this far. Much love brother

As you all may have seen from my introduction post I’ve been growing for some time.
Started in or around 2003 before I felt too safe about searching out info on the net. So I was limited to some hightimes mags and a bit of ingenuity.

Spent some time at first with cfl’s inside a computer cab. Which was actually somewhat successful even though I burnt the shit out of them.

Then built my own enclosure and grew in there with even more cfl’s and T5’s, until I got a 400W HPS. That did me well for years until I upgraded to 315CMH.

Finally got myself a decent tent after the CMH and then another CMH. I used that combo until VA went legal. At that point I went ape shit and upgraded everything.

Gave my 3x3 tent to a buddy along with some other goodies to get him up and running.

Now we are more or less caught up.
May I take you behind the curtain… 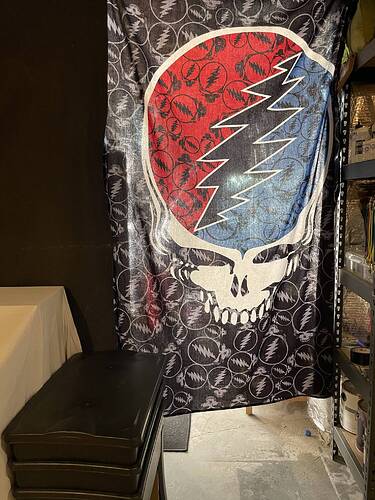 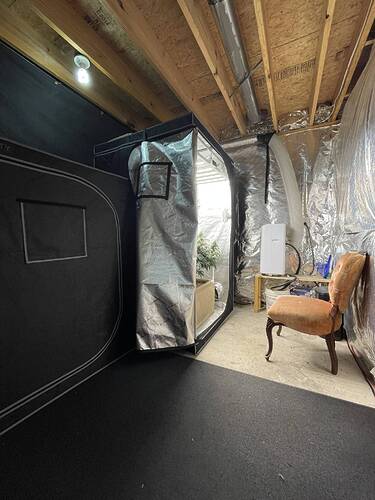 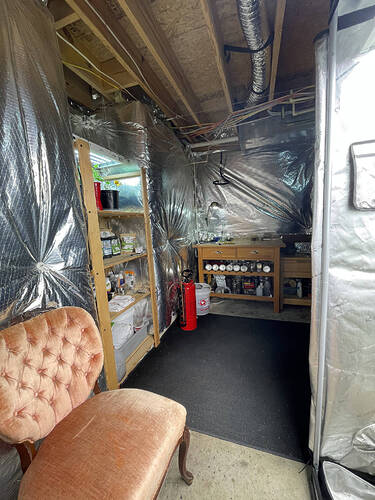 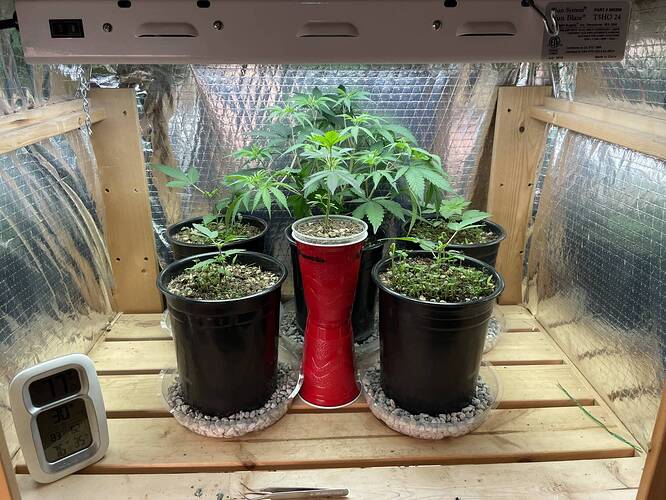 image2016×1512 470 KB
We will go over these later, I’m excited to get to the Strawberry Temple for you guys.
So without delay, my current main attraction… 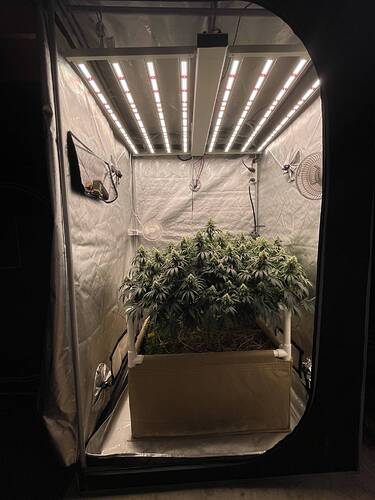 image1512×2016 344 KB
2 very different pheno’s. This one has much looser structure, narrower leafs and more pinsol nose with just a hint of fruit that surprises you on the back end… 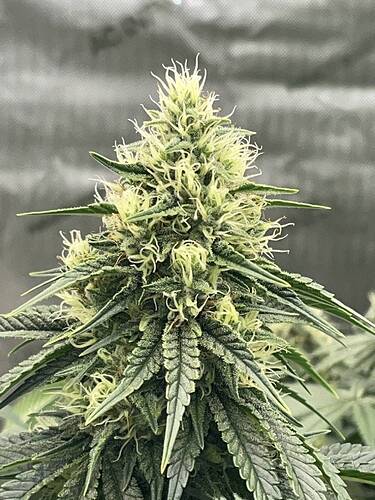 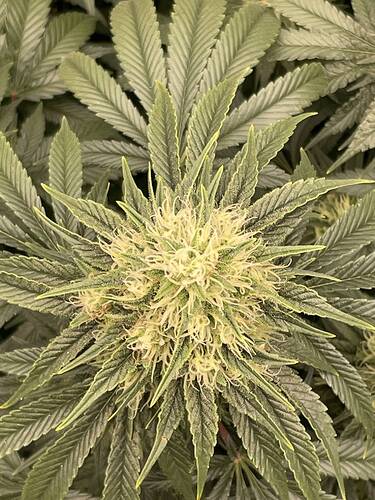 image1512×2016 429 KB
This one on the other hand, has got to be the most fruity pebble nose I’ve encountered, I want to say almost like nerd candy.
A much more condensed bud with a broader leaf as well… 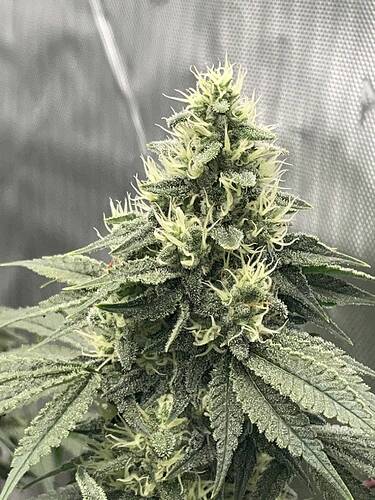 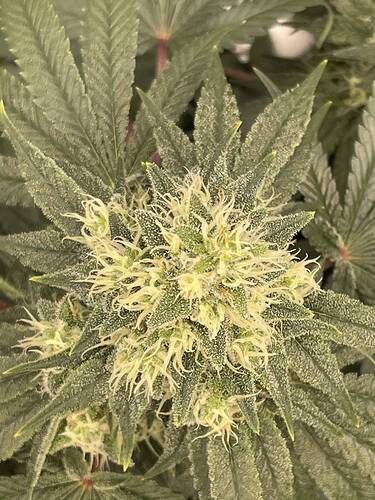 I originally also had two Lavender Jack in the bed but they skunked me and both turned out male.
So in an attempt to rescue some of the space and not have to veg for 2 more weeks to reach the very corner I threw in a fem Trainwreck. Seed direct to soil, she had about 1 week of 18/6 before I flipped the tent to flower.
I have never grown 12/12 from seed so good experiment. Here is the littl’n… 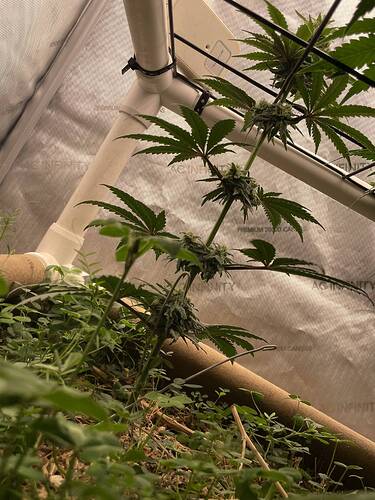 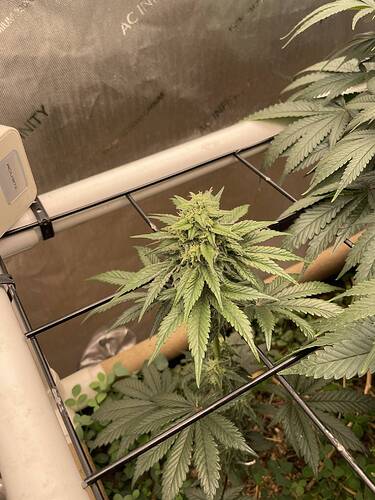 image1512×2016 373 KB
She’s not big but man does she have some lungs. Indescribable for me at the moment, but I know I know it but can’t quite place it, almost like a almond butter. As she develops we will revisit the nose on her for sure.

As for inputs I have amassed quite a bit for the shelves. And I know what some of you will say(fanboy) but let me disclose there is a distributor no more than 2 miles from my house and the convenience of such a thing is a kin to a crack house.
That being said here’s my B.A.S. Collection 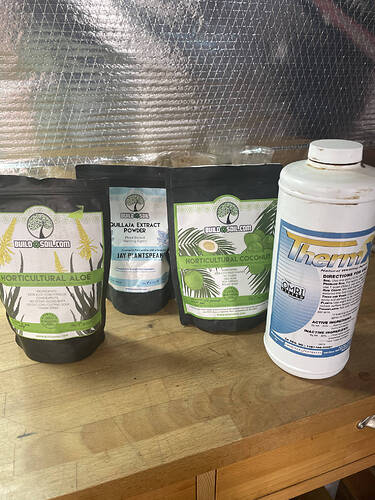 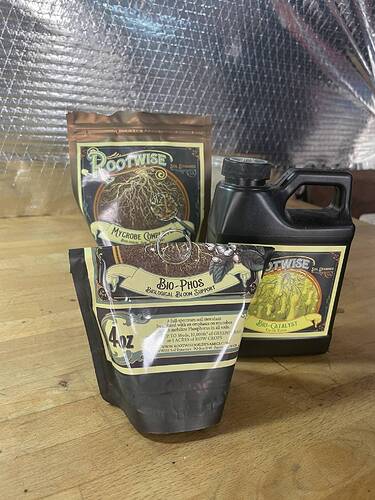 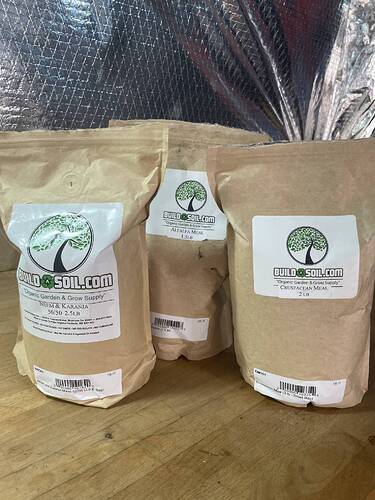 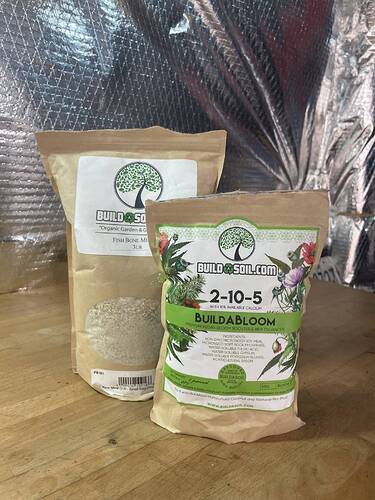 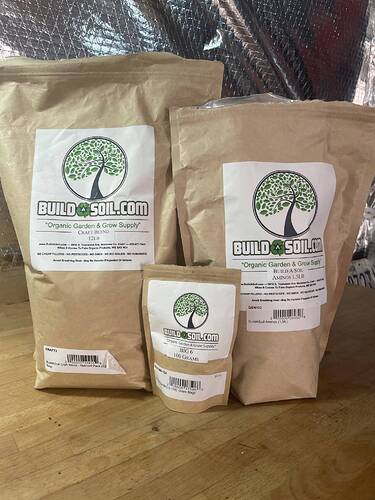 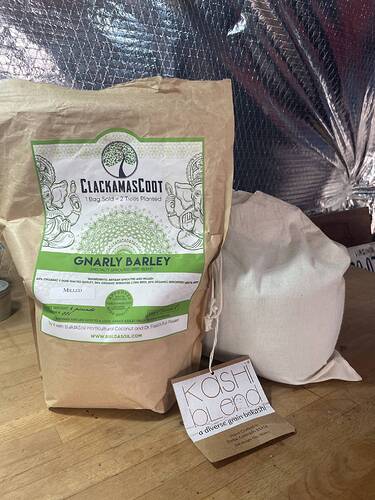 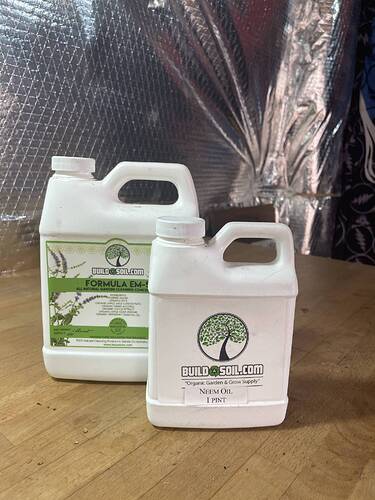 image1512×2016 312 KB
I also have the blue gold combo in case of emergencies, have yet to have to utilize them in the large bed. 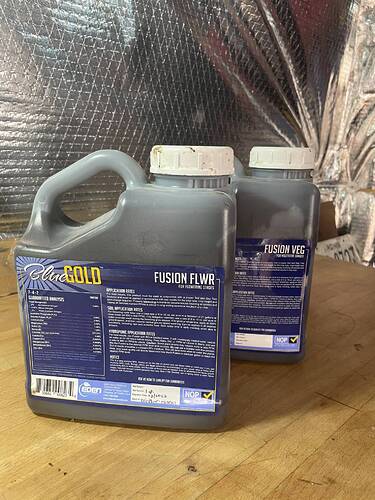 image1512×2016 461 KB
I have a raging worm cafe worm bin where most of the neem/karanja, gnar-bar, alfalfa, crustation meal and craft blend go. 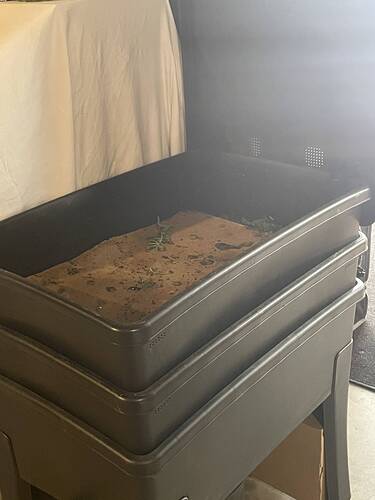 image3024×4032 736 KB
I do my very best to keep the inputs to a minimum after the re amend and during a grow cycle but I do like to tinker and I think my girls appreciate the love every once in a while.

Tonight they got a nice cool drink of some plain old filtered water. They like it deep and slow

I started my compost pile and a leaf mold mound last fall so hopefully by summer I’ll be able to start running that through the worms🤞🏼 No pics of that, sorry.

Also will be starting some new ferment projects this spring with Crunch.

Ok, so now last but not least, some beans.
This is my current noteworthy stock… 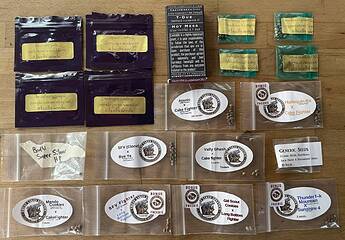 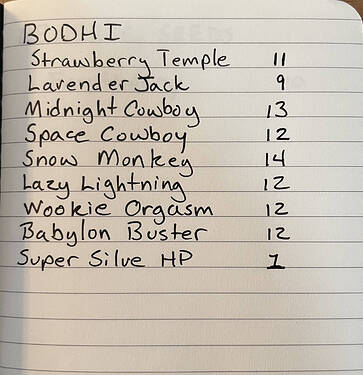 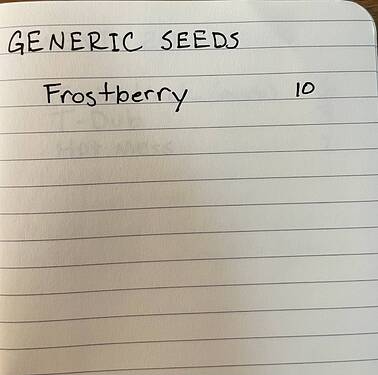 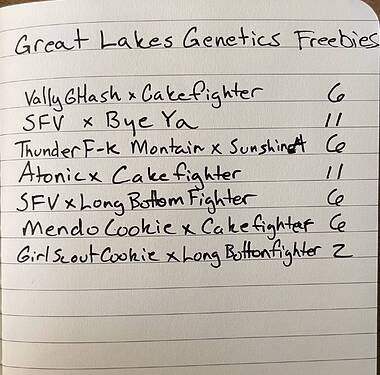 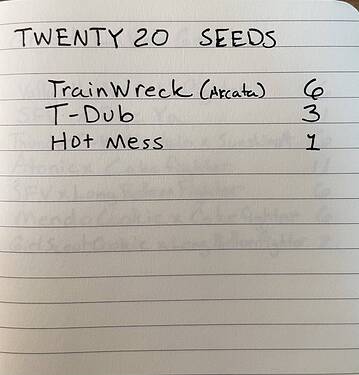 image2423×2527 552 KB
I think that’s pretty much it for now, I hope you all enjoyed the tour.
This won’t be scheduled programming but I will update at least once a weak and any big developments as they appear.

I’m going to spark up a cone of Space Monkey so if y’all have any questions, I’ll be on for a while still tonight.
Again, there are so many great growers here and I’ve already learned so much. I just hope I can live up to the OG way.
Thanks to all for such a warm welcome, it’s been a long road for me to find it here.

Good morning. Nice little garden. Glad to be invited ‘behind the curtain’ to watch and happy to have you with us.

I set up my portable hammock and will be following along. Hey bartender, Jobu needs a refill!

Nice setup my dude. Love that worm bin too!
I have a hydro shop really close by, and I always want in “just to look around”… We all know how that turns out

Nice setup! I’m doing the same thing with cycling compost / leaf mold through worm bins but your bin looks much nicer than mine. Looks deeper than the traditional stacking worm bins you see. Is it pre-made or did you make it yourself?

Very interested also to see how the Space Cowboy (Larry x w15) turns out should you decide to run it. Haven’t seen any reports on it yet but given how much I like SunRa (sfv x w15) I bet it’s amazing…

It’s a worm cafe @syzygy, found it on amazon. It actually has another section but 2 is giving me what I need for now. I believe it’s an Australian company.
After my next run I plan on working on some f2’s and the SC is on the top of a very short list for that.
SunRa is one I’ve been keen to get a hold of

Edit: I tried to find the link for the worm bin but the only thing I could find is the blanket they make. The company is Tumbleweed though. I did a quick googleing and it appears they sell them at homedepot.
A little advice, if you get one of these skip the blanket, the worms just eat it.

Following along here - love me some Bodhi strains. Strawberry temple is looking nice! I grew a similar strain in Kodama (lush x strawb milk) - your second fruity pheno looks a lot like the strawb milk leaning phenos. Nice 3x3 raised bed! I’m planning a 2x4 bed for my 4x4 tent, got it all ready just waiting on space to put it in there ha.

Always nice to meet a fellow bus rider @ramblinrose , welcome to the basement!
The 2x4 sounds like a cool arrangement inside a 4x4, are you leaving room for de-hum/a.c. etc or leaving room for some smaller pots? looking forward to seeing this.

This is both amazing and intense! I’m loving your build and attention to detail. Gonna enjoy your grow show

I’ll be watching this great looking grow and set up. Can’t wait to see you start some more seeds to hunt through. I ordered the trainwreck tdub hot mess variety pack of mendo 2020. Right now I am running the girls crush by them and about to flip. I ordered a few packs of Bodhi and will be working threw them this year. 7 Zap are started but have Umeboshi(killer queen x wookie), Purple colombian X kashmir , soul axis (axis x snow lotus ) and Pestilence x snow lotus .

Can already tell this is going to be a fun one to watch. Welcome my fellow Virginian

Thanks @Pigeonman , that means a lot coming from you.
I have been lurking and catching up on your ‘stop worrying’ thread. You have lots going on my friend!

Thanks @Kami and welcome,
Wow I like your taste!

For sure, likewise! Yeah my plan is having the 2x4 in the back part, leaving room for smaller pots in the front, as well as making it easy to access all of it for watering, training, defoliation etc. I’ll probably bring in a second light to maximize it, currently just using 1 315w cmh.

It can get tricky getting to the the back of the 3x3 once things fill up, your idea may be more efficient for sure.

Cool little set up. Following along

Nice I’m glad you got your grow posted. You have nice clean setup, really great. I’ll be following.
What’s your thought on putting a 3x3 no-till in a 3x3 tent?