I don’t know if you’ve ever tempered chocolate before – but don’t. lol

It’s a hassle. Temp’s gotta hit 114 to melt all the chocolate crystals, and then cool some of it down to ~90, constantly moving, just to recombine the whole thing and hold it at temperature? Do you know the mess that can make!? Do you want ants? Because that’s how you get ants.

You can cheat in two ways, first is the easiest way. If you’re starting with store-bought chocolate, it’s probably already tempered. When 75% of your chocolate has fully melted, you can chop up the rest, or grate it if you’re uncomfortable with knives, and use it to temper the lot.

The second method requires you to sous vide some food grade cocoa butter at 92F. Just chop up or grate your cocoa butter, vac seal it, and toss it in the water. Come back the next day and if the temperature is right, it won’t be liquid, but it will be far from solid. Chuck it in the fridge. Grate it into your melted chocolate at 10-15% by weight, and it will auto-temper.

For a basic fudge, melt your favorite chocolate and mix 50:50 by weight with Sweetened Condensed Milk. Not Evaporated Milk.
When it’s above ~110 degrees Farenheit it will be super shiny, and smooth, and as the temperature comes down towards 100F you’ll notice the sheen start to fade. That’s your signal to toss in a pat of butter and stir it until it’s melted, repeat a couple times until the fudge is matte, and toss it in the fridge to cool.

I’ll be back tomorrow with pictures, and how to cheat on your Gummies.

‘Posts eat it not f-ck around with it

This is a great tip and I’ll have to try it the next time I make chocolates. I just tried working with cocoa butter for edibles and they’re an absolute ass-whipping, my stoner relatives can deal with about 1/4 of one (one took 1/2 and they were positively white-knuckling it). I have a sous vide thingy that hasn’t gotten much use, and pretreating the cocoa butter seems much easier than actually tempering finished chocolate. These are just untempered chocolate made with simple syrup, cocoa powder, cocoa butter, and vanilla extract. 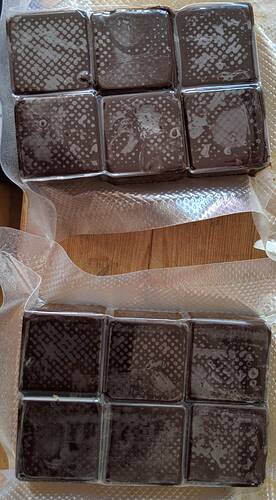 I’ll be back tomorrow with pictures, and how to cheat on your Gummies.

do the gummies you make require green dragon tincture? i have a bottle that i haven’t used and have to do something with it,

I have a sous vide thingy that hasn’t gotten much use, and pretreating the cocoa butter seems much easier than actually tempering finished chocolate.

You’ll have to learn the sweet spot to your setup, but hell yeah.

do the gummies you make require green dragon tincture? i have a bottle that i haven’t used and have to do something with it,

I use dabs and lecithin 50:50, but I have used tincture before.

Technically the gummies I made with tincture were perceived to be lower potency, but I don’t actually know if that was related to the lack of lecithin, or what, exactly.

I’ll do the gummy write-up when the sun’s up.

Now that I’m getting into making my own medicinal edibles, tinctures and creams I am definitely bookmarking this post! Great advice. I remember trying this in culinary school, it’s a difficult process for sure!! Takes a bit of practice and patience.

I’ve some some infused butter I made frozen. About a half pound. Mini chocolate chips, lecithin and MCT as well as thermometer. Might have to attempt something soon since the oatmeal cookies I made have vanished.

So if your plan is to open a confectionary, and sell gummies made from wild-sourced fruits and berries, definitely get a good gummy recipe and make everything from scratch. But if you just want to succeed, not play with recipes and ratios and pH and techniques, just buy some high-quality premade gummies, and go from there. Those guys spend tens of thousands of dollars getting their recipes right. Why reinvent the wheel? I like Black Forest. You can get a 6lb bag for like $12 on hamazon.

The easiest way is to start with dabs of a known potency, but let’s be honest, there’s no wrong answers.

I think 1% by weight is the upper limit before the taste becomes overwhelming, but I think the right material might stretch that. Let me know what you prefer. Generally, I use 5grams dabs and 5 grams lecithin per 1000g of gummies.

However much dabs I’m using, I throw an equal amount of lecithin into a glass container and put the dabs into the center, so it doesn’t stick to the glass as much. Mix it until you think it’s done, and then mix it twice as long as that. Viscous liquids are funny, and just because they look fully mixed doesn’t really mean they are. Again, tho, if it’s not a business venture, there’s no wrong answers. 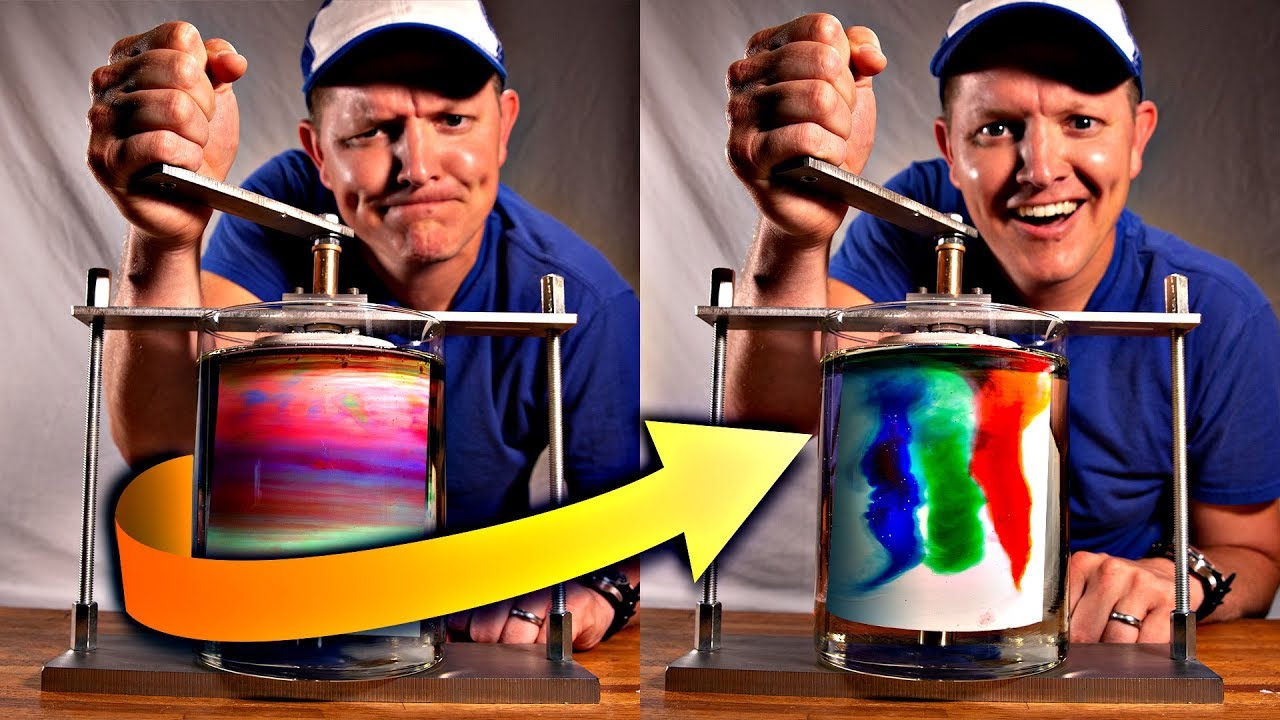 The one thing that can really set your gummies apart is adding a little extra flavor and color to them. Fill the jar most of the way with gummies, but not to the top, and then if you’re using powdered colors add em first and shake em up. I pour the flavor and lecithin over them before melting, so it does most of the distribution for me.

I’ve no tricks for pouring. I’ll update tomorrow with pictures.

You’re taking the pre-made gummies, melting them down, and adding lecithin and extract?

Yup. I’ve got all the ingredients on the shelf to document a batch right now. Should have a moment this afternoon to get it done.

Nice cheat. I can see myself separating them by color and flavor.

First time I just mixed em all up, and call it Ruby-Red Grapefruit. The bitterness that comes along with the cannabinoids really add to the illusion.

When separating them, I particularly enjoy mixing Orange and Lemon. It makes sort of a Double-Orange flavor, that might be my favorite of all.

If you check out candy flavorings, Loranns has some natural flavors, if that matters to you. Their Pomegranate is a fake flavor, but holy fricken crap it’s amazing.

There’s also this woman who makes perfumes who decided to get into food flavorings, that are hella expensive. Aftelier dot com. I’ve tried the Strawberry and Peach, and fricken love em – but also tried Yuzu and Lemongrass and wish I hadn’t.

First and foremost, the worst burn you’ll ever get in your life very well might be from candy. I’m lucky enough to say the worst burn I’ve ever gotten was from a pot of beans, and that’s only because candy genuinely scares me.
Don’t fuck around. Be attentive.

How hot is this jar? 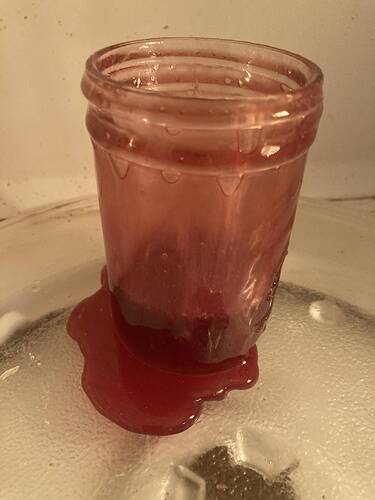 This was 250g of gummies, and it was boiling over after 60 seconds. This picture was taken within five seconds of opening the microwave. If you let it boil over, the jar itself is now literally boiling hot.
The lesson? If you half-ass your job, you’ll do four-times as much work. Don’t rush; and don’t assume my numbers will match your circumstances. This isnt a “how-to”; its a “how i do it.”

Normally I start with fully-decarbed material, but I figure that’s not the norm, so I started with plain old dabs this time. A shot glass of plain old cooking oil or everclear is the easiest way to clean your silverware. Scrubbing with soap is a nightmare. 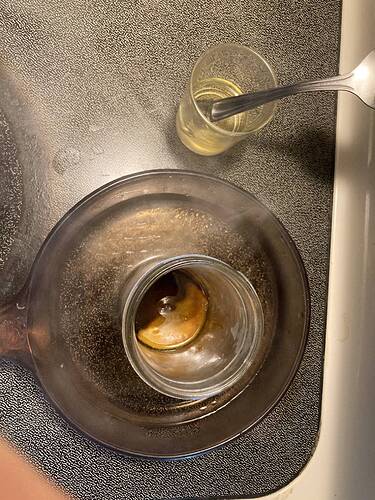 image1512×2016 555 KB
5g of dabs and 5g of lecithin, in a hot water bath. This pan isn’t normal, either, and if your pan has a flat bottom you’ll want jar spacers to keep them from sitting flush against the bottom. Otherwise they’ll jump around as the water underneath them surpasses 212F, and you might crack your jar. 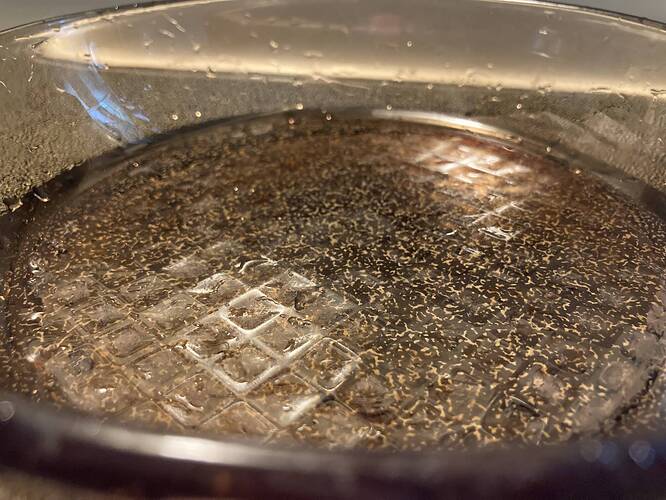 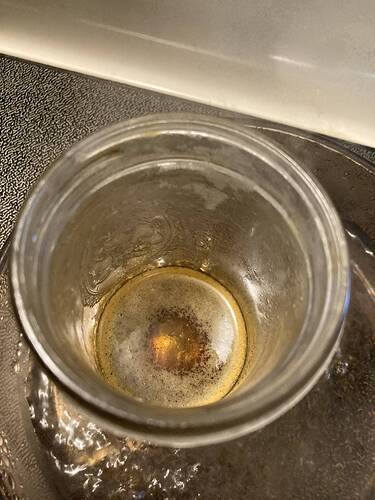 image1512×2016 344 KB
As the dabs hit ~200 they’ll start to rapidly boil, tiny tiny bubbles, compared to water. When the bubbling slows I pull it, but if you prefer a more anti-anxiety / bedtime gummy, extra time will oxidize THC into CBN.
I absolutely hate the uncertainty that comes with this method, so I suggest starting with material thats been decarbed before cannabinoid testing. In another post I’ll go over how to skip this whole game, by starting with isolates. 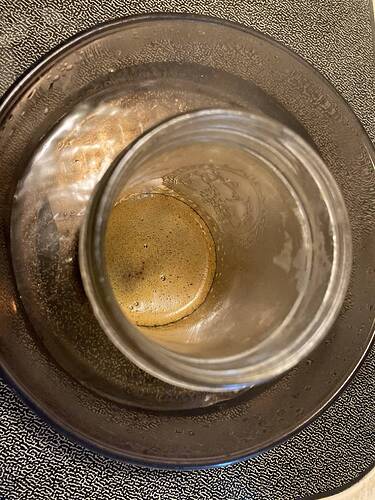 For my microwave, a 1000g of gummies in a quart jar for sixty seconds. Don’t move the jar, but spin it 180 degrees and run for another 60 seconds. Then stir, and run for one last 60 second burst.
Don’t try to stuff all of the gummies in right away, either. Just top the jar off after the first burst of heat. 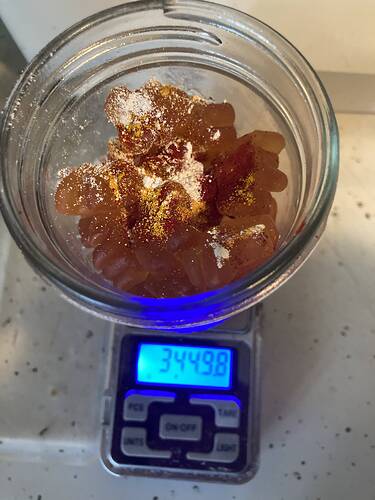 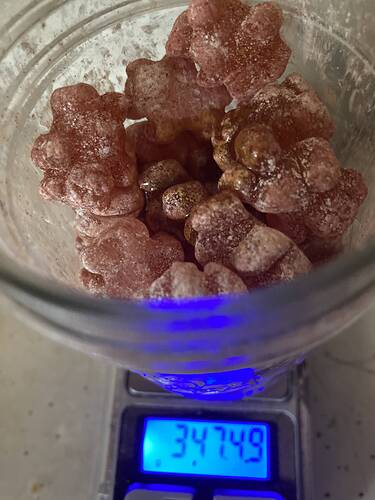 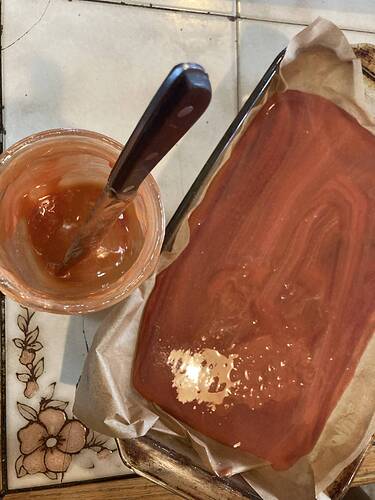 If you use a sous vide, and squeeze bottles, I would still do the first steps in glass jars, and transfer to the squeeze bottles only when you’re satisfied with the homogeneity. I have gummy molds, but I hate them. I’d rather cut gummies by hand, than wash hundreds and hundreds of cavities. So I just pour directly onto parchment.

Couple things I forgot; I rinse the 9x13” pan with water and shake out as much as I can. The few drops left behind will let the parchment sit flat against the bottom. 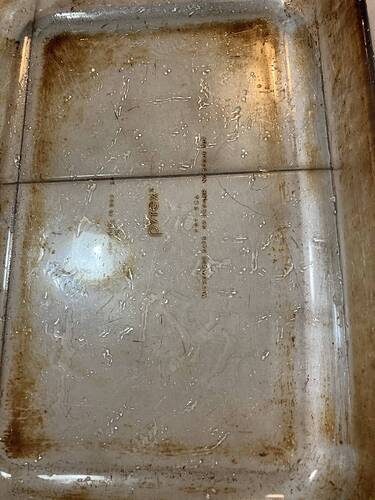 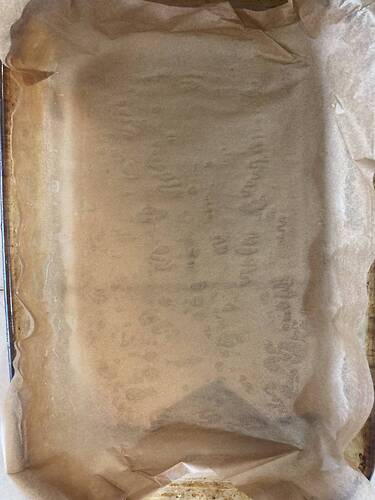 You’ll also lose 5-10% to the sides of the jar. I just accept that, and because this isn’t a business venture, I almost pretend it doesn’t even happen. I genuinely don’t care if I get 110 gummies instead of 122.
I’ll write up another post when I cut em. I’m sure there’s more that I’m forgetting.

keep refrig in a covered container.

Makes about 75 pieces of candy depending on the size of your candy molds.

Good looking out, GR. How’s the texture compare to real gummies? They always seem to have significantly higher water content than the scratch recipe I use. Never found a jello-based recipe that I was happy with, and I always assumed that’s why.

You ever test shelf-stability?

A little softer… The water content and grain alcohol I find evaporate off in about 3 days. I usually let them stand in the molds for 24 hours then i pop them out and let them sit on a paper towel for another 24 hours in the frig. They are pretty much good to go.

As far as shelf stability they have to be refrig or they melt in high temperatures 85+. If left in the frig covered they are good for 2-3 weeks.

I found using regular jello vs the sugar free adds more crap to the content and dilutes them more. So that is why I use sugar free jello.

What kind of shelf life are you seeing with these recipes?