I have no idea what I am doing.

Now that’s out of the way.

I started with 4 seeds. 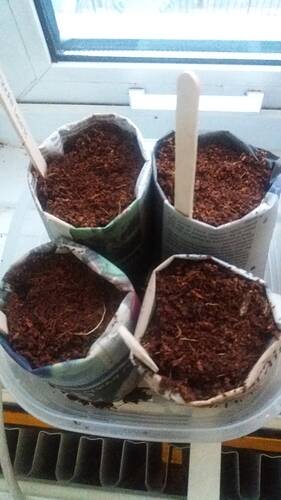 On the night of the 31st March the Stress killer decided to join the world. 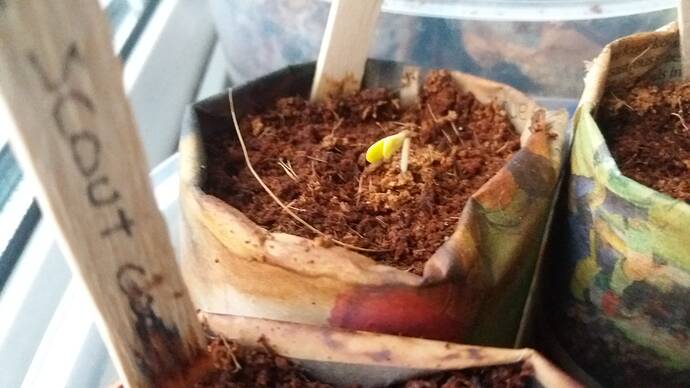 Followed by the Girl scout cookies on the 1st April and then Northern lights and Blackberry Kush on the 2nd April.

At the point the weather began snap freezing and I simply couldn’t keep the temperature stable in the bay where I usually do all my nursery activities with seeds. The light was also terrible from constant overcast. So I took my old monitors box which I was planning to throw out, added some strip lights I bought the year before to test on strawberry plants and made myself a nice warm nursery for these little guys along with all this years chilli plants. 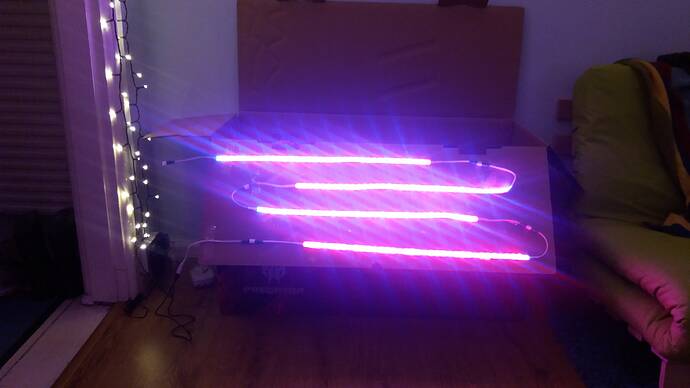 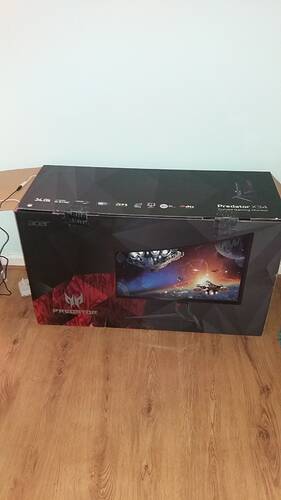 These are the lights I’m using at roughly 40cm’s above the seedlings. https://www.bonluxled.com/600mm-flexiable-led-grow-strip-light_p0121.html

Then disaster hit on the 3rd April. The stress killer (which has caused me no end of stress since it was still in its packet) got much to leggy and toppled over. 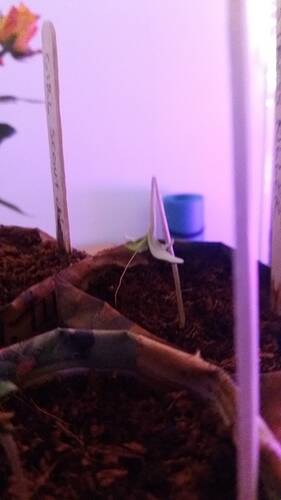 Thankfully some very nice people on the OG discord got me through my horrified panic. They’re all now supported by chopsticks I found in the draw leftover from some sushi driven madness. As of the 4th there leaves have all darkened a little to a pleasant green colour, the chilli’s are also enjoying the new nursery so far. 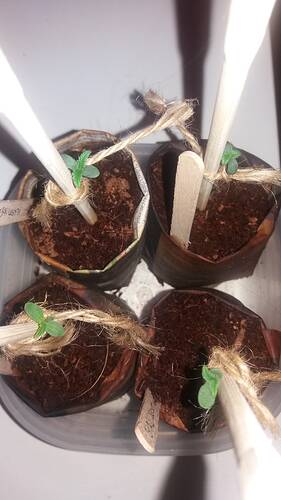 However, I’m not hopeful the Stress killer will make it. It’s stem has gone thin half way up where the bend occurred though it has also grown a little taller as well keeping that thinness going. 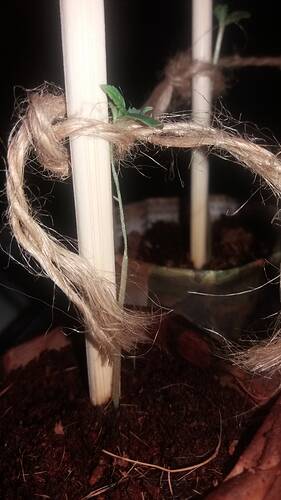 Currently awaiting my order of 5 gallon fabric bags to transfer them too when ready. I also moved them up an extra 20cm to try and stop them trying to get higher and higher. Any advice is appreciated.

I’m not hopeful the Stress killer will make it.

Damping off (or damping-off) is a horticultural disease or condition, caused by several different pathogens that kill or weaken seeds or seedlings before or after they germinate. It is most prevalent in wet and cool conditions. There are various symptoms associated with damping off; these reflect the variety of different pathogenic organisms which can cause the condition. However, all symptoms result in the death of at least some seedlings in any given population. Groups of seedlings may die in...

Except it’s happening at the top rather than the bottom after the spot where the stem was damaged. The others aren’t showing any similar signs, but worth considering.

it’s happening at the top rather than the bottom after the spot where the stem was damaged.

Oh ok. If it’s flopping from physical damage then you might just save it still. Good-luck. I occasionally have a seedling damp-off and the symptoms are similar to this.

Oh ok. If it’s flopping from physical damage then you might just save it still. Good-luck. I occasionally have a seedling damp-off and the symptoms are similar to this.

That would be nice. Thanks for the luck, I defo need it

First off, they are going to need to get in their final containers ASAP. I would suggest 3-gallon for autos. They are on a fixed clock and any stress, like transplanting and topping, will cause lower yields.

Second of all, they are starving for stronger light. Whats your plan for lighting? It sounds like you are going outdoors. The light you linked is not going to do the job for much longer.

@Mr.Sparkle grows autos as well, perhaps he has a few more hints for you.

I agree they are starving for light…stretching way too much and whispy especialy for an auto.with more light ,you should have atleast 3-4 sets of leaves at that plant height.

Hopefully That light will strengthen them up a bit and the stress killer can make it. Never like to see a seed that has a limited life time have any stress. I myself have yet to grow an auto and being in a unforgiving climate come september and octobter, I’m quite interested in giving them a try so I’ll be keeping my eyes on this one.

I know I said this in the chat, but when your 5 gallon bags come in, bury the seedlings up to the bottom of the cotyledons and that space will then start to become root zone. You will never know they were tall little ones by the end

Looking good, hope the sun plays nice for you soon.

I decided to try 1.5 gallon tubs on their own this run. Weather’s still being a dunce and the new lighting won’t arrive till Tuesday at the earliest. 2 were being weak yesterday so I coated their stems in honey and buried them to their heads. One has perked up. I still have a lot more seeds so I’m really viewing this run as more of a training exercise.

They really are finicky buggers though.

I’ve also bought some perlite to use next time but the coco aerates just fine on its own but worth a try.

They don’t come till Tuesday and I just want to see how it plays with the strong one at least. Also try stuff on them if I can. Rather get fiddling done now than later. Test subjects can be worth their weight. Besides I’ve nowt all to do at moment with this weather. Most of the chillies aren’t ready for re-potting neither. Need something to stop me going insane from all this rain. lol

Autos don’t much like being transplanted as they have limited time to produce and not much time for rejuvenation…what I have done that works well is after germinating I’ll put them in a solo cup that has had the bottom removed. Then I’ll bury the solo cup in the soil of the final pot and just water inside the solo cup until it is well established. Then instead of taking it out of the solo cup I’ll just cut down the side of the cup(one cut on each side)with some scissors then just pull the solo cup sides out and presto, transplanted without moving it. No stress…it works well.

with the paper pots I use you just drop them in a new pot, cut some holes in the sides if you want but roots go through it just fine.

Okay so using some of Mr.Sparkles lovely threads on DIYing, I bought some 13w LED philips bulbs, removed the tops and rewired an old computer fan to run off a usb. Then took a different box and created a temporary grow box. The 4 way splitter hasn’t arrived yet so there’s only 3 out of 6 of the LED bulbs with the strip lights in their right now but it’s damn bright enough. I looked inside and temporarily blinded myself. Gonna see how well this works and at some point get a better box that isn’t cardboard. 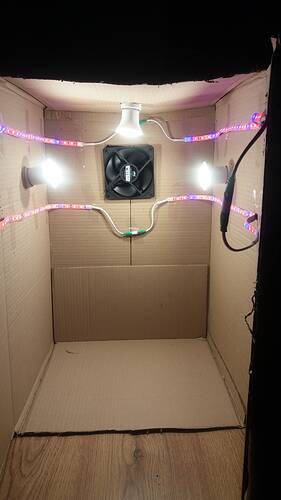 Out of the 4 I planted, 2 are still alive. Northern lights is working on its 3rd tier leaves and has gotten significantly wider, hopefully with better lights as it’s still constantly overcast here, she will get some benefit. The blackberry kush, though having made a come back and working on its 2nd tier leaves is starting to seem sickly again. I’m not sure even the extra lights gonna save this one but I have a few more seeds for that strain.

either way should work till you can plant outside

the 4 way splitter will be on the top and there’s not really room for the extra 2 there so I figured the 2 could sit on the sides with the strip lights. I could point them downwards or move them a bit higher though?

yeah saw your waiting for the four way, dont know how the back side is but im sure three would fit up top, think spaced out like a triangle.

But as is it will work till you can plant them ;).

Just something to note for next time is all

I don’t think I will be able to plant them sadly. Forecast is just rain and storms for the next month and a half. And I can’t put up the greenhouse when it’s wet so I’m probably going to have to keep them indoors this time around. 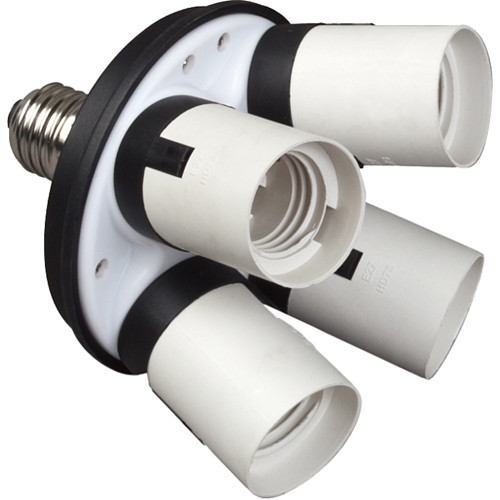 I only have the 2 plants at the moment and they really seem to be liking the current light in there with 3.