Started 2 sets of autoflower seeds. 2 dark devil’s by @Mr.Sparkle via @Northern_Loki and 2 fem mix created by @ReikoX. I’m attempting my first grow in my cheapy greenhouse and my first grow in Cali winter. To make it interesting I will be testing each with the inoculate Mammoth P. 1 dark devil and one fem mix with and one each without. If they make it to flower we should see a difference there in bud growth, size and yield.

The 4 beans have been planted in Sunshine Mix #4 and put in to germ. I haven’t decided what soil I am gonna use once they root out their starter pots and will more than likely use Megacrop as my nutrients. 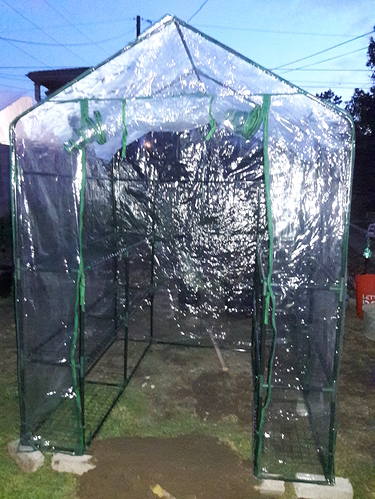 This should be fun

YES! Been waiting to see what you put into that greenhouse.

According to instructions, Mammoth P will begin Week 1 of veg.

Pulling up a seat to watch the show!

you may find that the floor needs covering if humidity/condensation get out of control. it’ll kill the grass/etc beneath, fwiw.

wishing you the best on this one.

gardening is the best gateway drug

Pulling out the lawn chair an making coffee.

Hope you are successful with ur grow

you may find that the floor needs covering if humidity/condensation get out of control. it’ll kill the grass/etc beneath, fwiw.

I really should cover it with newspaper right and smother it?

I use regular shitty brown cardboard in my otherwise neglected garden beds, it will eventually decompose and get eaten by the wormies, but lasts longer than newspaper.

My wife made us a gothic-arch greenhouse a few years back, I grew cherry tomatoes in it. The soil definitely had to be covered for a season to kill everything first. We also tilled in some horseshit from my friend’s farm, so that had to decompose for a bit.

After that we realized that even though we had no weeds, humidity was off the charts as @cannabissequoia mentioned. So we used those expensive silver tarps on everything except the few spots where the tomatoes came up, and openings for watering.

This way we were able to actually close up the greenhouse to keep some heat and not have everything rot inside from otherwise insane humidity. Keep in mind though this was around Vancouver, BC, and it is pretty damn wet here. Rainforest wet.

Crap. I tore up the cardboard I had and stuck it in the compost. I’ll use newspaper for now and cover with cardboard when I get more. I’ll have my boyfriend bring some from work

Now you got me dreaming about another greenhouse. We burnt that one when we moved 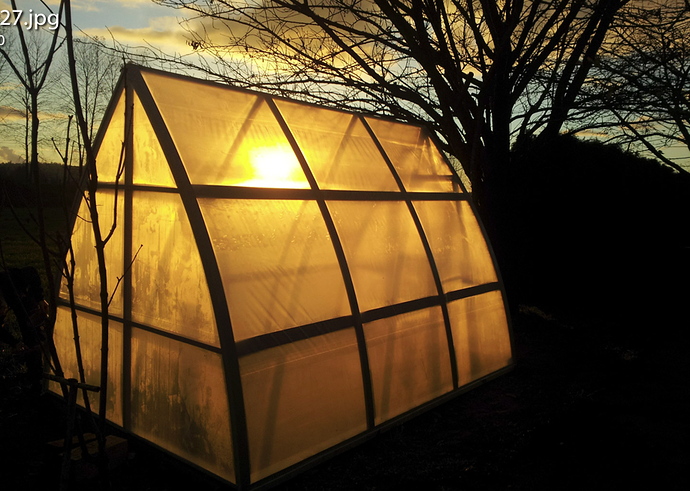 I bet! That looks fancy! Mine is a cheap eyesore, but it’s working!

Now you got me dreaming

Love mine. Do it when, while you can!

No signs of life yet

1 of the fem mix is in the lead. Starting to come through. Greenhouse is nice and warm

Came back from breakfast, washed my car and what do you know, both dark devil’s trying to poke through. 1 last fem mix to go!

So, if the last fem mix doesn’t pop by tomorrow, I’m gonna pop a new bean. Even if the old one sprouts late, it’s probably gonna be an under performer anyway.

I’m in bed with the flu. Body aches, cold sweats, fever and terrible cough. Managed to walk to the greenhouse. Noticed what looks like algae in one corner on the plastic. It’s green that’s why I’m thinking algae. Anyone know how I can kill and clean that? Tomorrow though, I can barely walk today.