Show your pics of any seeds you received from Colorado Sativas.

Here’s a Bangi Haze from CS. She was cloned and transplanted outside about a month ago. 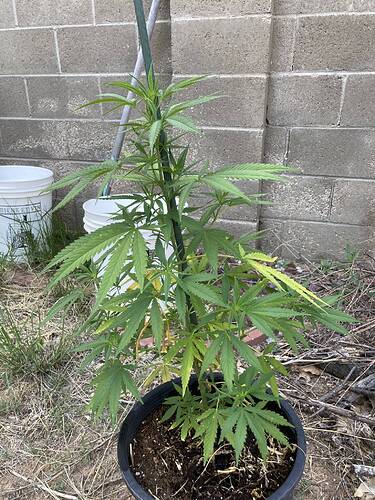 Following! I’m v. Intrigued to see what folks are finding in these crosses.
@highminwin anything to report?

yea, things are looking pretty good right now. they’re still pretty small in their 1gallon containers, but i’ve had most of them on 12/12 for the last two weeks or so. i put them on 12/12 early because the new caledonia and nanan bouclou are supposed to be long flowering strains (13-14+ weeks) and i was going to keep two of the nanan bouclous (the twins) in my tent, so i wanted to get them started right away. once i’ve sexed all of the females, most of them will be going to my grower buddy in san diego who will grow them outdoors.

one of the queen mothers started showing sex a few days ago, which i was surprised by, it seems very early. the other queen mother showed sex today as well as a few of the other plants, although not all of them. i do wish i had vegged my queen mothers for another week or so since they’re only 8-ish weeks to flower, but i have to work with my limited space.

i have one confirmed male with my nanan bouclou 1. i’m not sure whether i’ll keep him for pollen, although he was quick to sex so that might be a plus? 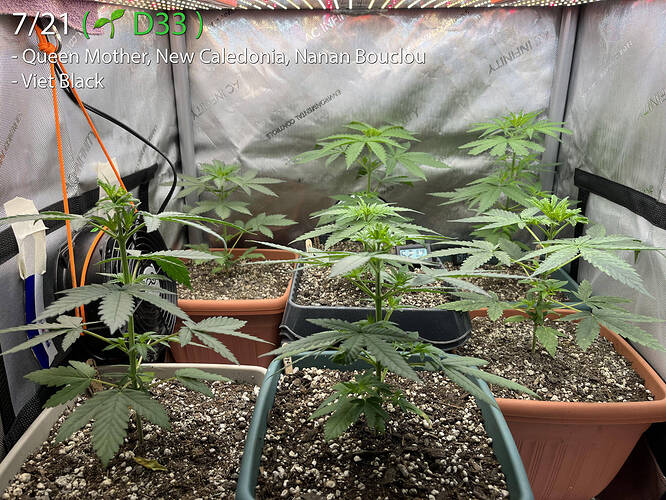 i felt like i kept some of the faster plants in their solo cups a few days longer than i would’ve preferred, while i was waiting for my second tent. so some of the growth is a few days slower than it might otherwise have been.

the viet black is not from colorado sativas.

These are Purple Satellite from CS, showing the variability that happens at f2 haha. Started same day, same soil, same everything. I figure it’s a Mexican leaner on the left, Nepali leaner on the right. They’ve been auto flowering for a while now, vegging 14/10, just started 13/11 last weekend.

Edit: I should add that these have experienced multiple savage dry outs, were under potted for a while, and have just generally been whooped on by me, no herms, only resilience 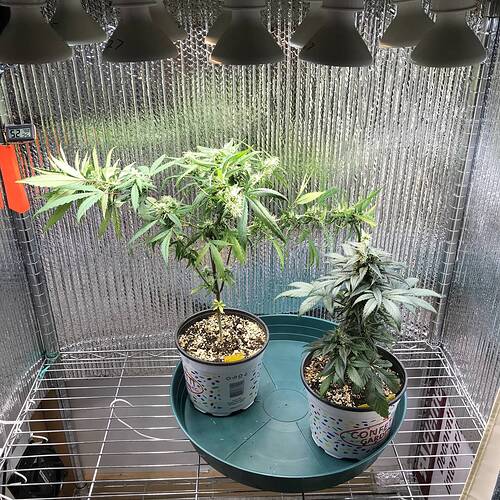 Exellent…
I be following this thread.

variability that happens at f2

Oh yeah, @potpotpot has brought up a good point about CS: The seeds on the website are identified as S1, but that is a weird colloquial nomenclature used by Gerry, the owner.
These seeds are photo/regs, and so they’re either f1 (multi strain crosses) or f2 (single strains), with the occasional (arguably) IBL (like, I might contend that the CannaBioGen Destroyer would be pretty stable).
The cool thing about the wide variety of phenos that are going to show up is that many of these seeds represent genetics that cost hundreds of dollars, sourced from highly respected seed producers, so selective breeders can have access to plants strongly exhibiting some of those genetics at a fraction of the price.
I do wonder if he has the consent of places like CBG and Snow High to reproduce or utilize their genetics in a for-profit venture…

Picked up quite a few different cultivars from Gerry at CS. I think I’ll be popping either the NL5 x Neville’s or the Oaxacan S1’s but I have quite a few and don’t know where to start not to mention I have to wait for a tent to open up. decisions, decisions!

I Will Be Watching!

I really want the African. I think it’s Ciskei? A Swiss company went into Africa in the 90’s and did a lot of work breeding with it until the company went under. Now the strain is rare as a hens tooth. A well worked and stabilized African strain from the 90’s that ISN’T Durban Poison? Sign me up!

Unfortunately I am a closet grower with a grow that is literally booked up for several years. If I bought everything I wanted I would need a football field to grow them in.

Thanks for starting this thread

if i’m not mistaken, i think @boomer is growing that ciskei. haven’t heard from him in a little bit though.

I have a few going pretty well so far. They are all currently in 3 1/2 gallon pots. 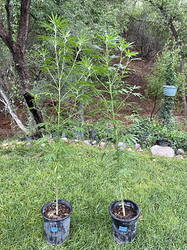 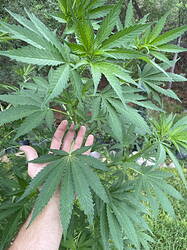 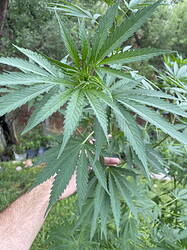 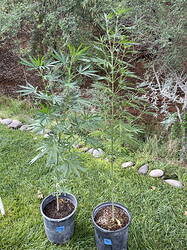 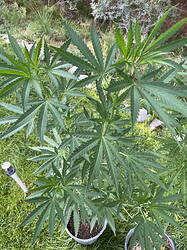 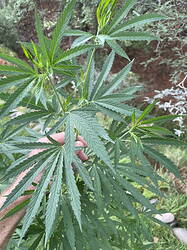 This was the hardest to germinate so I have several at different ages. 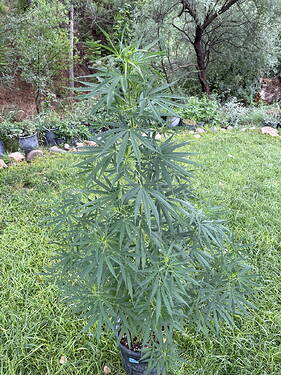 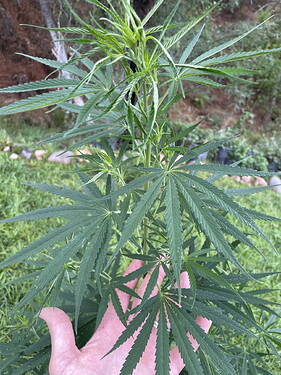 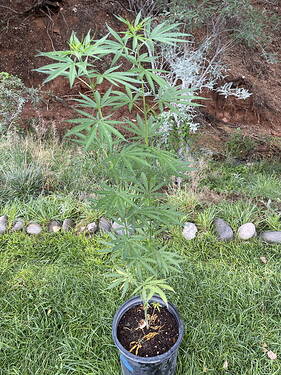 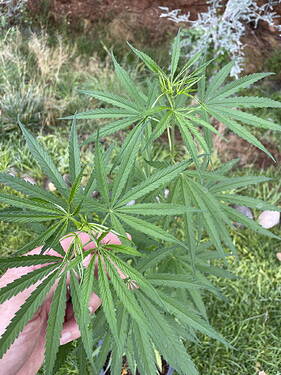 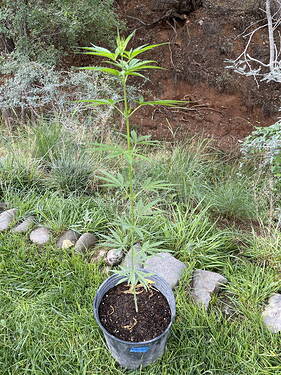 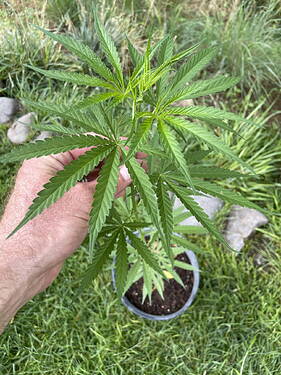 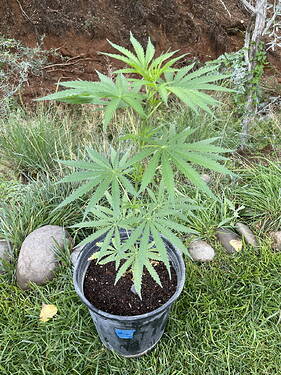 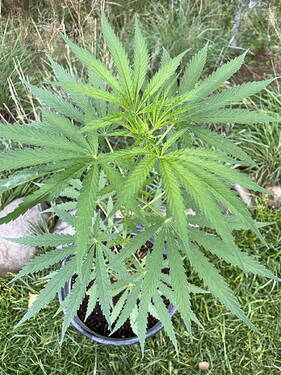 The next two were gifted by @highminwin thank you again for the addition to the garden! 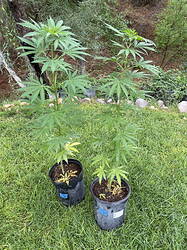 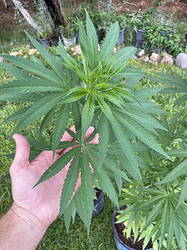 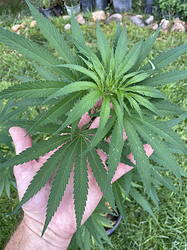 Two of them look to be male 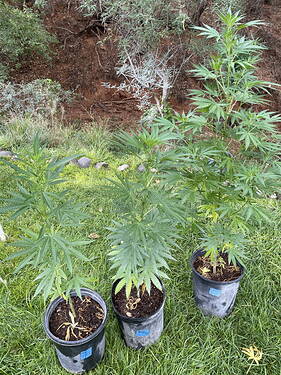 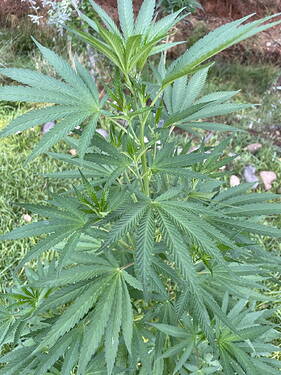 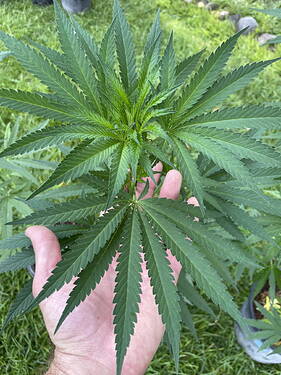 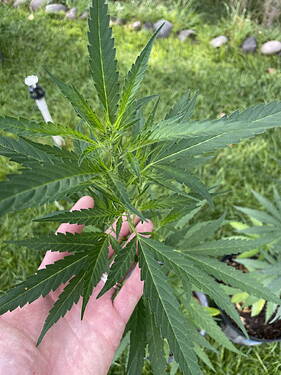 I’m not sure why but one of the males seems to be throwing three finger leaves as if it is revegging. Anyone with any idea of why it might not be too happy with it’s caretaker?

I also have several New Caledonia going also but it looks like I forgot to take pictures of those somehow.

oh man deeez, you’re killing it over there with your plants! and what a selection. i love how big your leaves are. the fingers on that queen mother, it looks like she’d give edward scissorhands a run for his money.

i’ve also got some queen mother and new caledonia going right now, so it’ll be nice to compare. can’t wait for your smoke report!

how far along are your plants? it looks like a month, or two for the bigger ones. love your progress.

This should be a professional sports team name…. Just saying…… I’d buy a jersey for the Colorado Sativas any day…. I wouldn’t even care what the sport was.

The larger plants were started early April and the rest were started late April through the first week of May. I had been keeping them in smaller containers through the growth stage trying to keep them somewhat smaller and manageable. Although I’m sure they are going to stretch pretty hard this coming month. I just top dressed everything and I was planning to keep them in their final 3 1/2 gallon pots so we’ll see how that goes.

I will be uploading some pics later. I have 3 Malawi x Zamaldelica in veg right now

i dropped two of them off last week (queen mother 6 and new caledonia 2) with my san diego grower buddy. they were transplanted into 5gallons of bu’s blend soil i (think it was). the nursery was out of happy frog at the time, which i prefer, so that was their recommended alternative. i added pumice, down to earth biolive, and some insect frass. did i add a little gypsum as well? i forget.

i hope they’ll take the transition from indoors to outdoors well. i don’t think my buddy has the time or inclination to slowly harden them off. i could’ve fed them with more aloe in preparation, but just had too much to do. 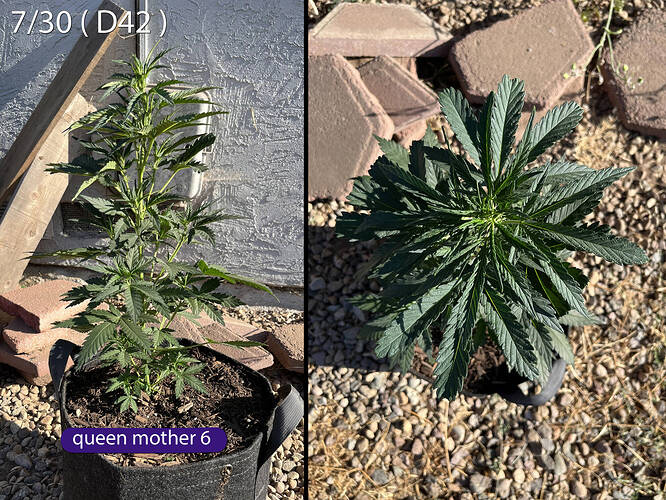 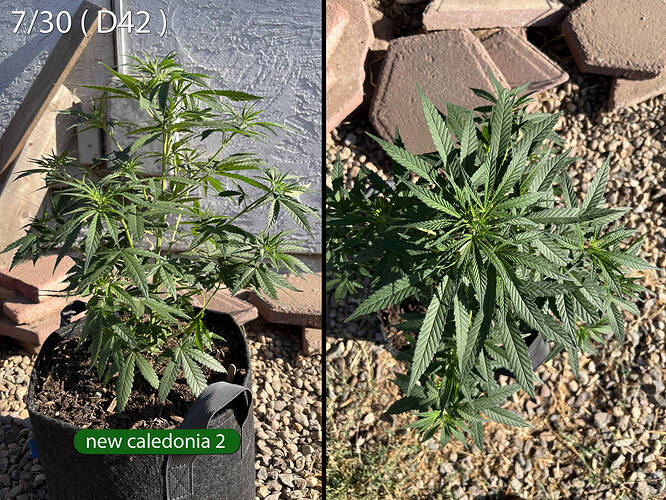 you might be able to see the queen mother is still trying to come out of her re-veg, which i put her into after sexing since she was moving so quickly. she’s also been fimmed at least twice i think, you can see the clipped tips on some of her leaves.

new caledonia showing some very cool leaves. i like how thin the serrations are. she’s got a nice, classic christmas tree shape with really symmetrical branching. 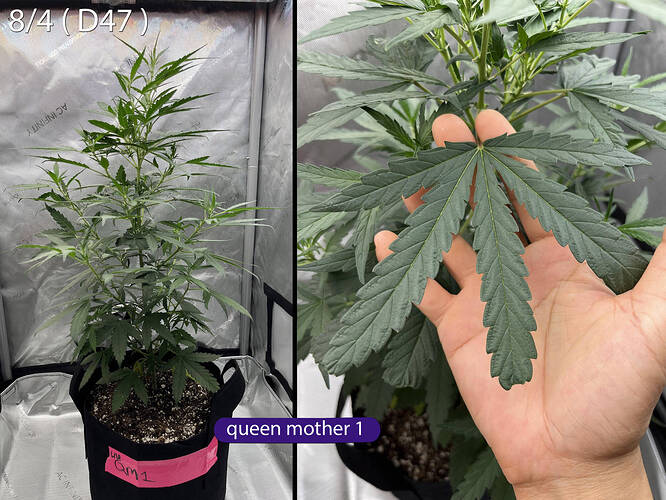 i kept one of the queen mothers, which you can see is also coming out of re-veg as well as multiple fimmings. maybe we’ll see a difference between indoors vs outdoors (although they’re not clones).

i also kept the nanan bouclous, although i would’ve preferred them outdoors since they are longer flowering. (i don’t have 14+ weeks to spare in my tent!) but i wanted to keep an eye on the nanan bouclou 5 twins, and since the single male i had from this group is a nanan bouclou, i figured why not. i can seed the nanan bouclou’s and then cross with the queen mother as well. 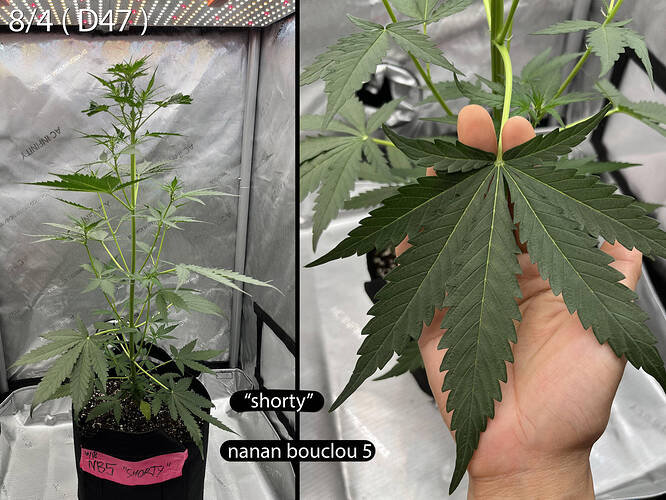 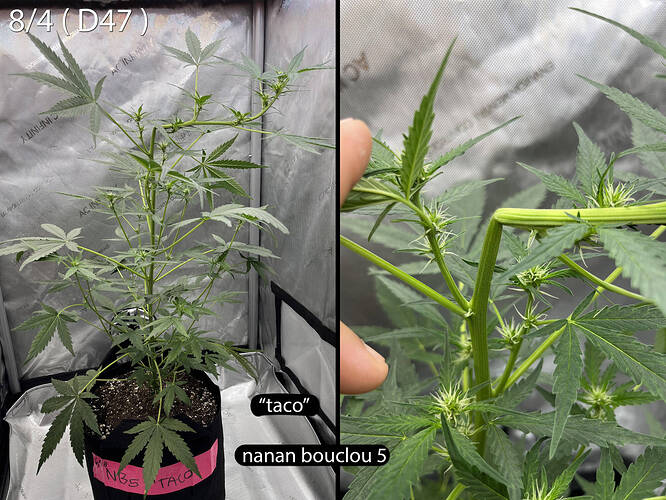 shorty and taco are both doing well. taco especially was growing a little too much, so i supercropped her (is that the right term?). that horizontal length is a good 6" of saved space.

taco has a funny thing where her leaves sort of float around or they lean towards one direction or another, just splayed out whichever way they want to go. 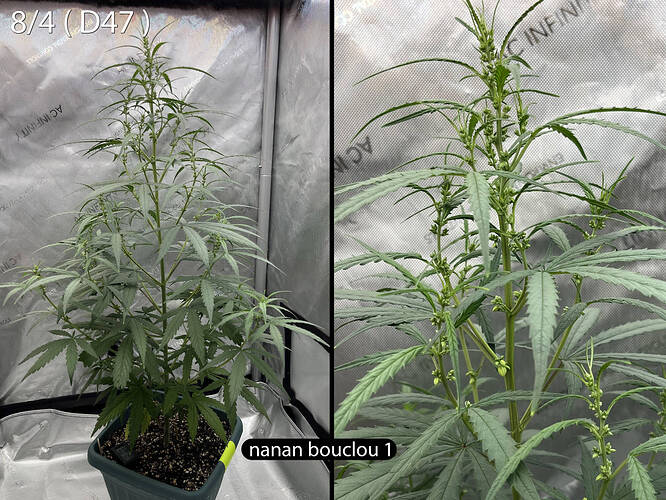 here’s the nanan bouclou 1 male. i wish i had timed his flowering a little better so i could just stick him in the tent with the females and let them go to town. but the ladies aren’t ready with their flowers yet, so i’ll have to collect pollen and manually dust. which is fine, since i can pick which branches to dust. but it can just be a hassle to collect that pollen! if only i had vegged him for an extra week or two.

aside from the male who is in 1 gallon, the indoor plants are in 3 gallons of happy frog soil. although these 3 gallon containers seem larger than the 3 gallon tall containers i had used for my first grow.

@OGTreeSlayer- I’ve read that some sativas start with wider leaves and they get narrower as they get mature.

@highminwin - Plants are looking great. That’s quite the handful. I suspect you’re going to be very busy this fall.