Glad you found us, welcome.

Are you going to tell me to kiss my own ass and send me on my way lol that’s only what I can assume by the “ny welcome”. All jokes aside thanks everyone and I wil be sure to at least get some pictures of my outside girls today or tomorrow for the site. Looked at my og kush this morning before I took off and she is looking beautiful

Well that’s pretty close in my neighborhood it was the double fisted single digits salute! You totally get the picture but I still welcome you on board! Have fun here

Reporting from Sacramento, Ca. I’ve been actively growing since 2009.

I cultivate primarily in coco coir organically and rock wool both semi organic and full synth top feed. I have also used NFT and DWC systems. I am also interested in breeding and extraction/distillation.

I focus primarily on indoor cultivation with LED and occasionally participate in live soil sun grows. I’m all about achieving the best possible outcome. First quality is the goal. I will be posting grow journals when time allows. Here to learn, share, and network.

Welcome @ColdChampelli! I look forward to your grow journal.

I am from south west Missouri this is my first indoor grow and hopefully my first crop that I don’t lose someway or another. I recently purchased a nextlight veg 8 I was trusting a long time friend and owner of a hydro shop. A couple days after I put my ladies under the light I realized that i needed a full spectrum light to actually be as successful as I wanted. So I have a bloomspec 600 watt full spectrum led on the way. It will go in my 2x2x4 tent with hopefully 4 girls. I got a few different strains to put in there since I have collected any seed I got from a bag of good nugs for a while. The strainsj have going right now are Maui wowie, I think gorilla glue and then a Durban poison that is just germinated. Once I get my new light in I will post pics and hopefully get some ideas from you guys. The pic is of the Maui at 4 weeks 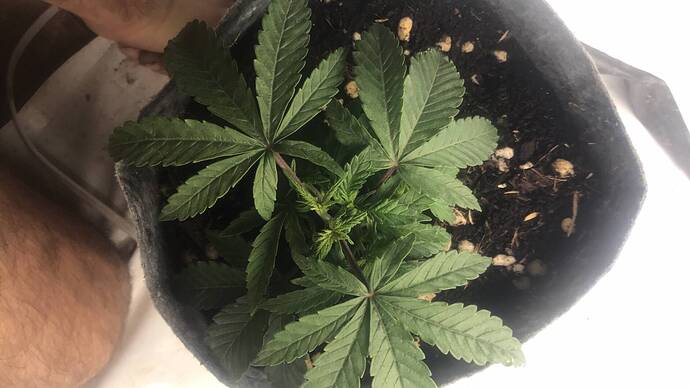 if anyone has any questions please feel free to ask

Reporting from Sacramento, Ca. I’ve been actively growing since 2009.

Thanks for choosing OG as your home, show us pics!!!

if anyone has any questions please feel free to ask

That was a good tale of the old OG, thanks for sharing that, and welcome back home.

Sounds like you have a good start. Welcome and good luck!

A post was merged into an existing topic: How to upload photos to Overgrow (from phone, tablet or desktop)

Hello all I’v been a member since late of November of '16 , and stumbled upon OG shortly after starting my first few plants in my basement back then. I have been in Colorado for about 11 years now and live in the Fort Collins area , why not its legal right? Wanting to get in the game of growing I started out with a cheap set of LEDS which I guess people are calling them Blurple lights ,after my first harvest I realized that those lights were fairly decent for veggie only, and not great for thick heavy buds when it comes to flowering( I have some nice looking outdoor plants currently) . I sample from time to time but I’m not a regular smoker! I’v come to realized I’v enjoyed growing this lovely plant just for the sure enjoyment , beauty and the awesome scent it leaves. I guess I started growing to help the wife with her neuropathy pain in her feet so I see myself making creams and ointments for her cause in the near future and maybe an occasional batch of cookies or brownies (haha) I consider myself an all organic guy, by mixing my own soiless mixes. I’v been making my own compost now for a better part of 5-7 years and Vermicomposting for the last 3-4 years pretty seriously and a little bokashi composting here and there. I have made some pretty darn good soil lately in my opinion, been dabbling in KNF and hope to go further with that style of growing, I follow people like Elaine Ingham of the SoilFoodWeb, and Jeff Lowenfels and employ their teachings in building the healthiest soil possible , I recently purchase a nice microscope to help in verifying soil microbiology and hope to learn more in that area I’v learned so much hanging out on OG and want to thank all those that contribute to this GREAT website!

You’ve been here a while and never gave an introduction quite like this… Love it man!

Your to kind thanks for your thoughtful words!

I remember the user name. howdy

A “Big Hello” from upstate NY. I’m born and raised in a small, dairy farming community in the beautiful foothills of the Adirondack Mountains. Throughout the 60s and 70s we were one of the top counties in the state for illegal marijuana cultivation, due to all of the rural farmland and cornfields. I’m a “dyed in the wool” outdoor grower, with a few years under my belt. I’ll be turning 60 years old soon and I started my first seeds fairly young. lol My plants are only inside long enough to get em sexed out and that’s about it for me. I only grow out a couple plants once a year and stick with a few varieties that I know will do well with our short growing seasons. I can still remember OG from many years back, but was never a registered member. It’s great to see it up and going again and I look forward to meeting more of you in the future.

Welcome to OG @adkfoothills, nice to have you. Shows us pictures of your grow!

As soon as I get out there to get one, it shall be done, my friend. ( “Agent Orange” this year)