Meant to start something like this way earlier in the process, but lately even my handwritten journals/logs are all over the place, so I’ll say better late than never.

I got hooked up with Anthos through another local breeder here in VT that I did some graphic design work for. As you can tell from the title, Anthos has bred this cultivar for a while now and it’s primarily been run as an outdoor variety here in the northeast. He sent me the F4 seeds for me to run indoors and report back.

The lineage of Niben as related to me are: Freezeland IBL X God Bud. “Niben” is the Abenaki god of summer, so you get the idea for the name from the cross.

I cracked 3 seeds and had one confirmed female early on. The other two are still in veg and I’m like 99% sure they’re male, leaving them to go a little longer to be sure before they get culled out. The one confirmed female got topped late in the game and dropped under a trellis in the flower tent about a week ago. The photos here are what she’s looking like as of today. 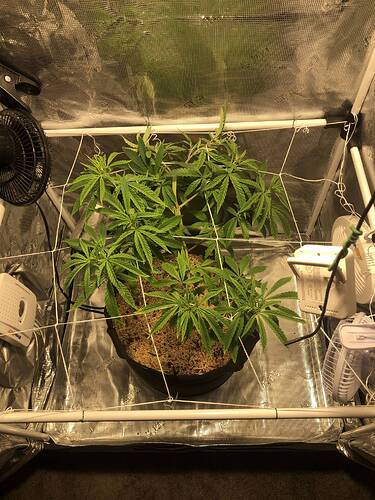 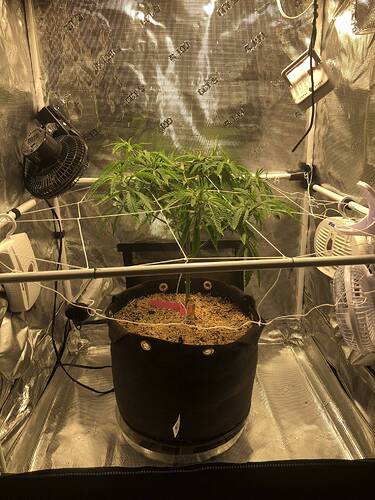 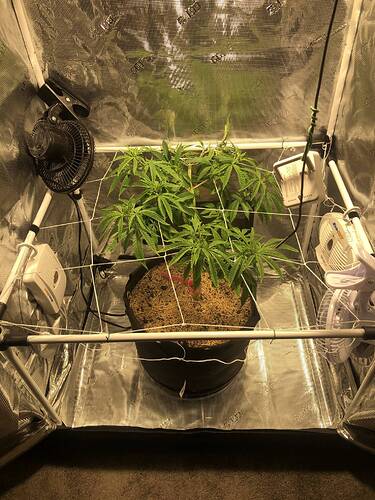 Update: been slowly training to fill the canopy as much as possible, trying to balance getting her spread out with not allowing her to get too big for the 5gal bag she’s in. Planned to flip end of this pst week but I started to notice the variegation on the leaves and was worried that it could be the start of a deficiency. Brewed and fed a nitrogen rich compost/nutrient tea on Friday, hoping to see some improvement. Noticed brown spots developing yesterday so beginning to think that it could be a little overwatered. Going to allow for a longer dry down period before the next watering and hope that the combination of all things will help and bring us to the flip ASAP. This will be the last time I attempt to flower a plant bigger than 4 nodes in a 5 gal bag moving forward, always seems to have some kind of issue. 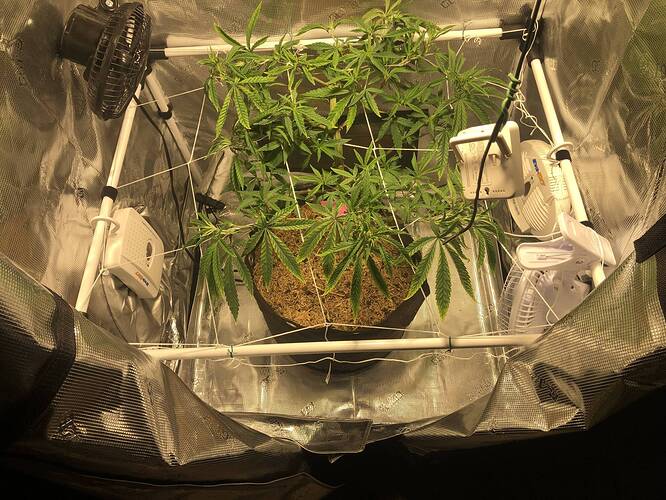 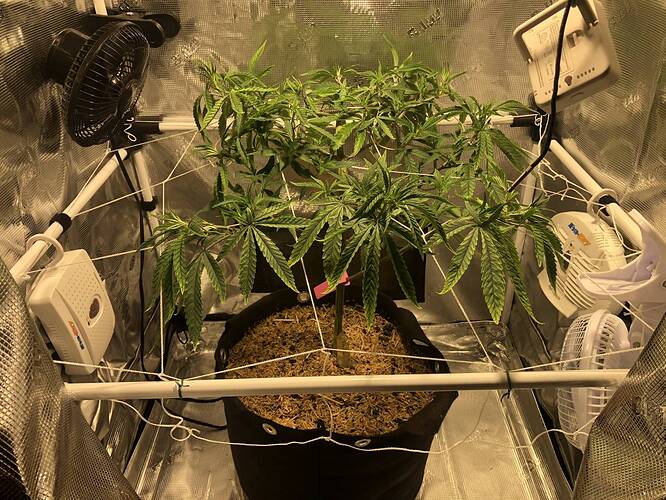 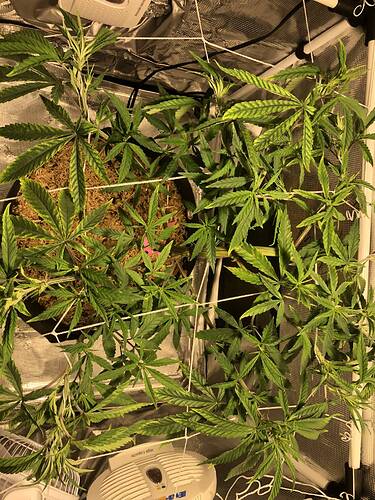 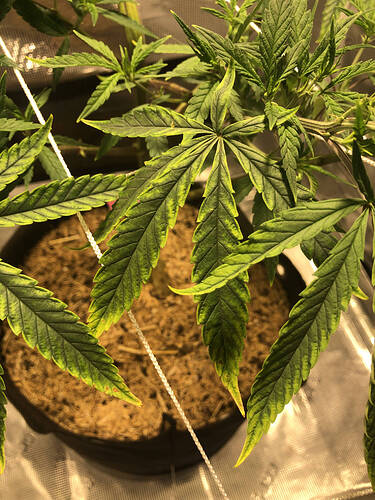 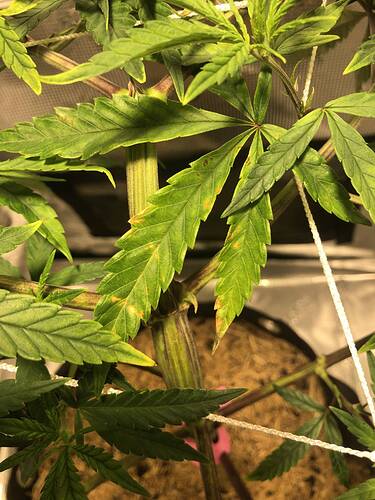 Watered this morning with coconut water. I’m hopeful after a longer dry down period, a nitrogen rich tea, and some cal mag that I’m working my way out of whatever issue was developing, the variegation on the leaves seems to be less extreme. Going to be thinking about flipping to flower soon as I’m sure I’m pushing the capacity of the 5 gal pots that it’s in. Ive got a bit of an 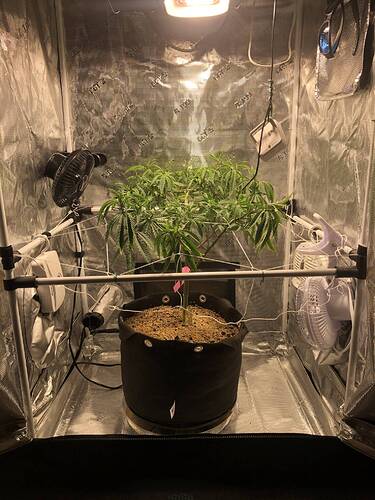 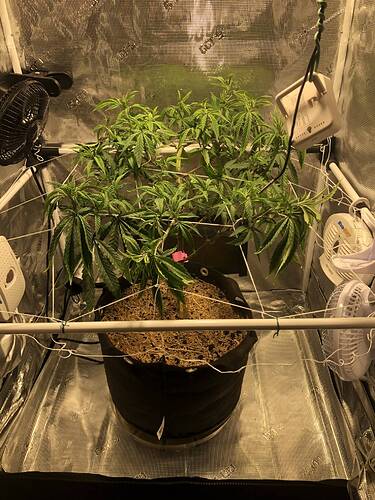 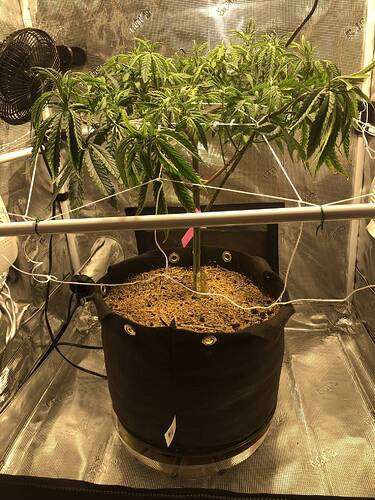 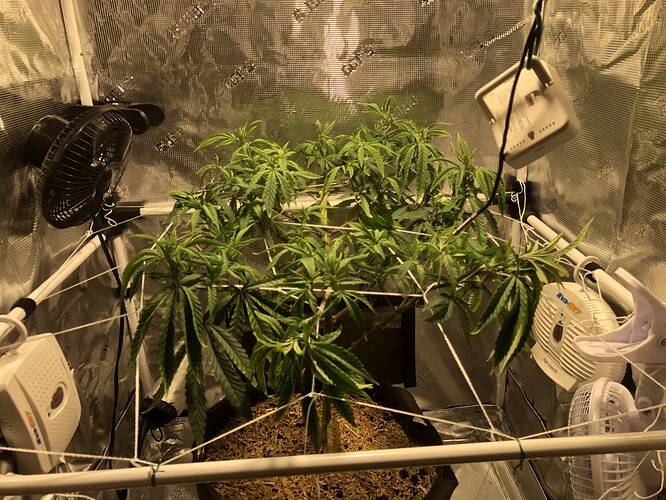 image2016×1512 579 KB
issue though in that I’m going to be out of town for about a week starting around the first of august. I’m debating whether or not to flip the week before and ride out the first week of flower with blumats, or to just wait until I’m back to flip her and just try to keep up with more regular teas and whatnot to address the deficiencies in likely to see through flower by overcrowding the pot size. I’d welcome any thoughts on this if anyone has any. Otherwise I’m just continuing to try to spread the canopy out as much as possible. This cheap ass trellis I had laying around has way too wide of squares though so I’m struggling to get everything properly even. We’re a little bit of a clown car over here but figuring it out.

Should mention: she looks a little sulky in these photos, her pattern is typically to look real bummed out the day of watering, she usually perks up around midday after getting a drink 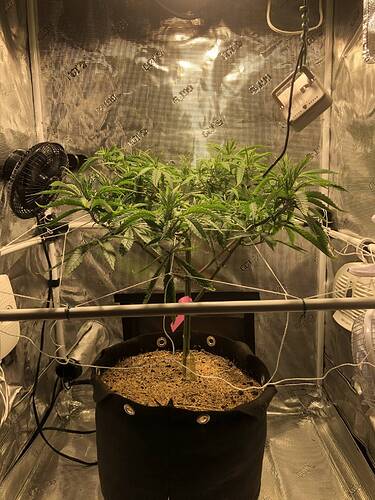