The Ebner Effect on Cannabis seed 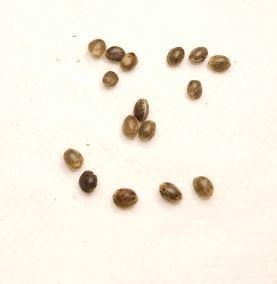 Hi Everybody,
I came across an unusual video from the Ice Age Farmer on youtube describing an almost lost method of genetically altering seeds (and eggs) to strip them of hybridization and GMO processes, known as the Ebner Effect.
The proponents of this method (germinating plant seeds and embryogenesis of bird and fish eggs) claim to have produced ferns and salmon having “prehistoric” characteristics. 12 ear stalks of corn too.
I am searching for the trip weed of my youth and also hoping to take the skunk out of the grower’s equation.

Youtube poster Mark Burch has given me the inspiration for my DIY static field generator.
(Please remember, Safety First with all tools and electrical applications!)
The Electronic Flyswatter(hereafter EFS) used in this guide probably won’t kill you if mishandled but it CAN deliver a nasty shock. I can’t take responsibility for any mishaps one may encounter so proceed carefully should you try this.) This model requires “D” cell batteries, though some models use “AA”. 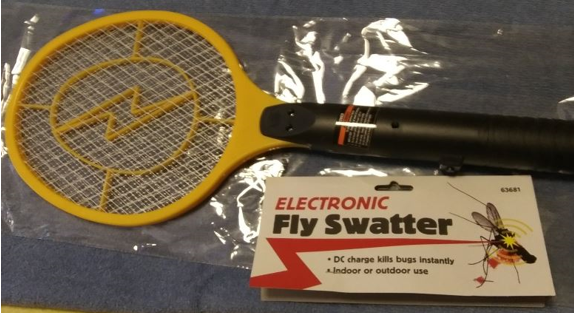 Tools and supplies and U.S. sourcing: 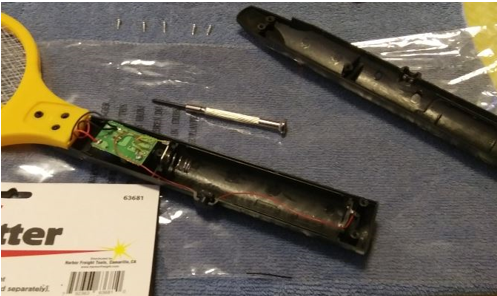 At this point I have decided to power my Electrostatic Field Generator(hereafter EFG) with a Trisonic power adaptor, available on eBay, rather than use “D”cell batteries. This little guy has the desired voltage(3v) and a polarity reverse switch that makes wiring a no brainer. This step is purely personal preference, if using batteries one can skip the next few pages. 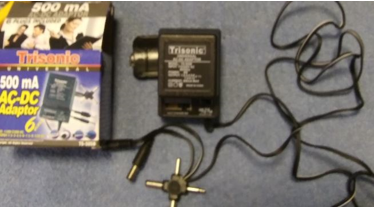 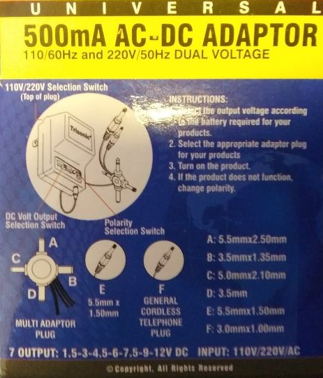 Since I want to use this EFG horizontally for seeds as well as vertically for cloning, I will condense the size and fix it together as one unit. I need to do a lil’ cuttin’. It helps to remove the battery terminals from their brackets and mark the cut areas on the exterior of the housing. Reassemble the two halves and cut with a hacksaw. 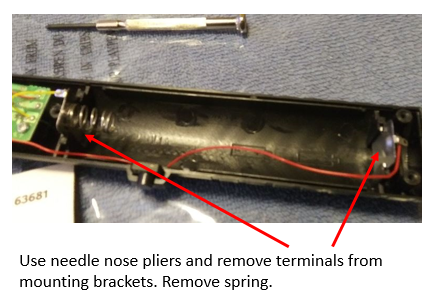 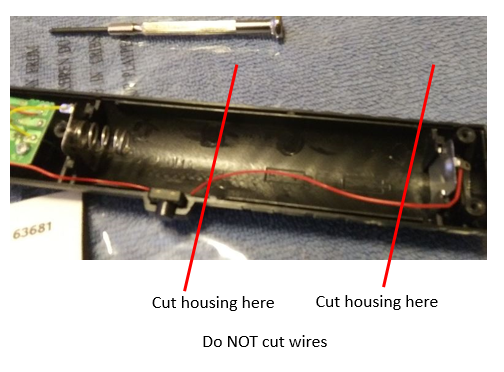 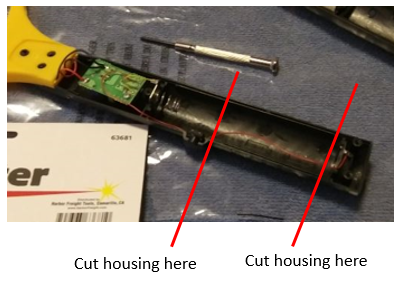 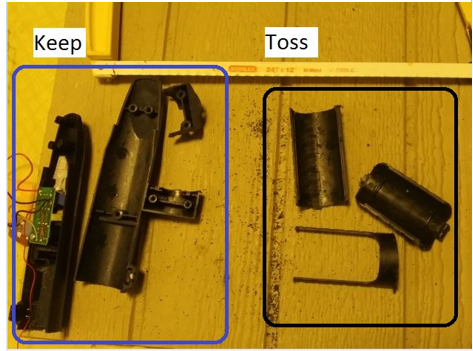 I will solder directly to the battery terminals and will reuse their mountings. Sorry no pics of this, crappy camera blurred everything,

Cut off plug adapters and solder a wire to each battery terminal. This is where the reverse polarity switch comes in handy, Chinese have a weird way of colorcoding electronics, if the unit doesn’t power up, just flip the polarity switch. 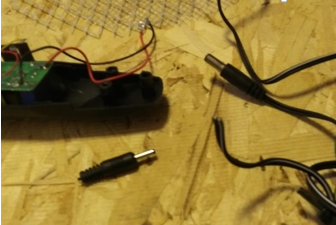 After soldering, reinsert terminals to mounting brackets, hot glue the parts back together then screw together the two halves , sorry no pics.

If using batteries one can resume the DIY here.

Pry apart both sides of the swatter portion to free the screens. Cut off one of the large mesh screens and cover the exposed wire cut with electrical tape. These screens have sharp, pointy edges, take care. 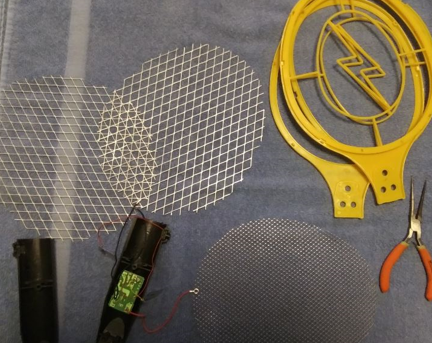 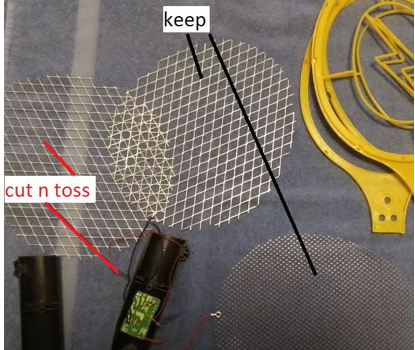 Sandwich each screen between 2 pcs of 8x10 acrylic sheets, hot glue each screen at several points, then hot glue together. 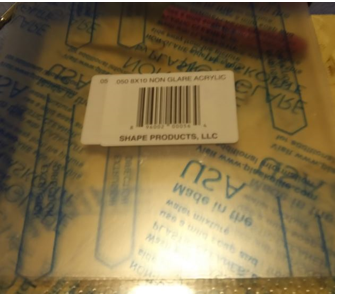 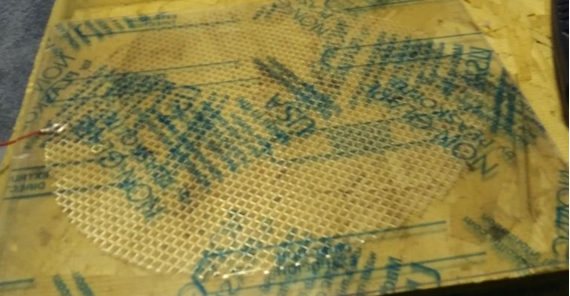 Attach spacers at corners of one completed “plate”. In this case, medicine bottle caps have the desired thickness (5/8” or 15mm) and provide protection from sharp corners. Repeat at each corner then hot glue both plates together at the spacers. Hot glue housing to one edge of plates. 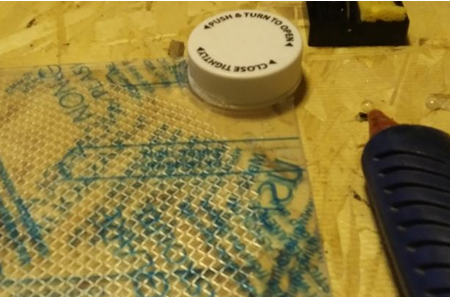 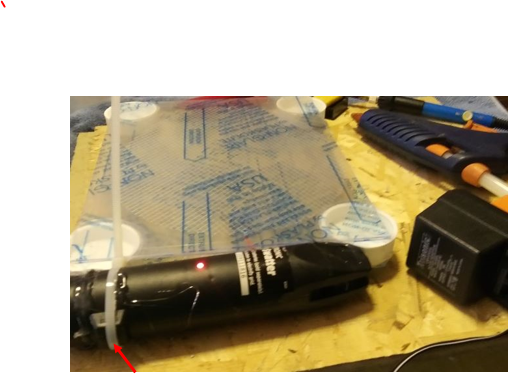 Cable tie around housing to keep power button on.
I could have avoided this step and wired directly to the adapter as I thought the power switch was on/off. The power switch has to stay depressed for power to flow.

Choosing seeds.
Since this is a side by side grow I chose some old seeds from a single plant. The ink faded or rubbed off the container so I’m not sure of it’s heritage, only that they came from a single plant. Again, I am looking for differences between the treated seed and the control group that aren’t treated, not specifics of the variety.
Numbers 1, 2, 3 and 4 are selected for the EFG. These will each be sprouted in separately marked petri dishes. The remaining 8 seeds are the control group and will be marked with letters in order of germination, A, B, C and so on.
Admittedly this is a small sample, I am restrained by my two small tents. Still I’m hoping for at least one female from the treated group, extras from the control group will go to my grow buddy. 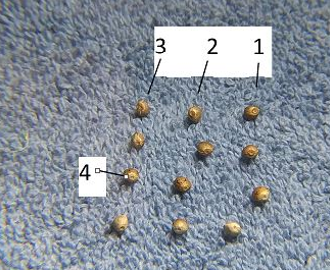 I’ll use 60mmx10mm petri dishes for sprouting with an extra petri dish cover underneath to place the seed in the middle of the electrostatic field.

Control group on left, individual test seeds on the right. 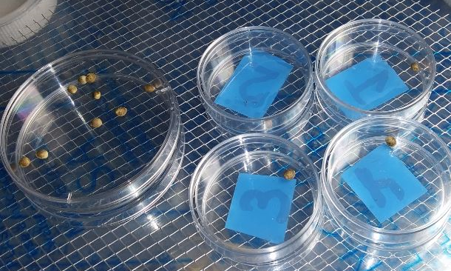 Below. Fantastic Four in the EFG!
All seeds were started on Jan. 4th two days before the New Moon in the biodynamic tradition. Early sprouting seeds tend to have greater germination rates during the New Moon. Two days before allows time for water to penetrate the seed coat and the aligned tidal forces of the Sun and New Moon help crack the coat. 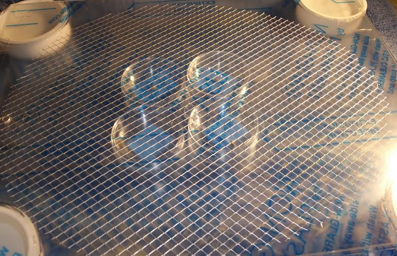 Treated seed #1 and #3 sprouted Jan 6th
Seeds A, B, and C sprouted the day after. More to come… 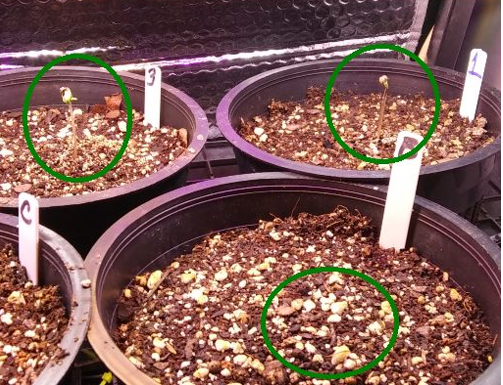 Whoa! Even after reading going to need an ‘elaborate like I’m 5’ edit! Good luck my man

lol
Sorry about that.
Click on the embedded links.
Here is a link that needs google translate:
https://fios-greenbox.net/

DAFUQ!? This is awesome.

Just want to add, I haven’t heard of anyone doing this with charas before.
If anyone has, please post up.
Anyway, I’m all for a good adventure but I seriously doubt to see fantastical expressions like the prehistoric fern or the “giant trout, extinct in Europe for 130 years, with so-called salmon hooks” since today’s mj is probably very similar to the original stock. It would be good to know what that original stock is though.

12 ear stalks of corn too

The genetic ancestor to modern corn was teosinte, not super corn with 12 stalks.
Just sayin’.

Do these changes breed true?

Maybe Ebner misunderstood the effect? Rather than reverting to a prehistoric state it may be reverting to a genetic model best for the medium chosen as close to baseline as possible. If it does revert genetics I’d imagine that it would take multiple lines to reverse cannabis to what it started out as. Question is though: would we lose THC and CBD? That came from a mutation caused by a virus

Agreed.
The claim of 12 ears per stalk would indicate some other process is occurring.
Modern wheat varieties have been showing decreasing amounts of protein, something that the descendants of Ebner are claiming is reversed when wheat is treated this way.
This sounds to me like the totality of a given plant’s genetic expressions have been unlocked allowing these prime characteristics to come forth, similar to claims made by Dan Carlson, founder of the Sonic Bloom Co.
What isn’t clear is what percentage of seeds in a given batch show the same tendencies?
Already though, I am seeing some verification of these claims as the only two viable plants are from the treated group, #'s 1 and 3. 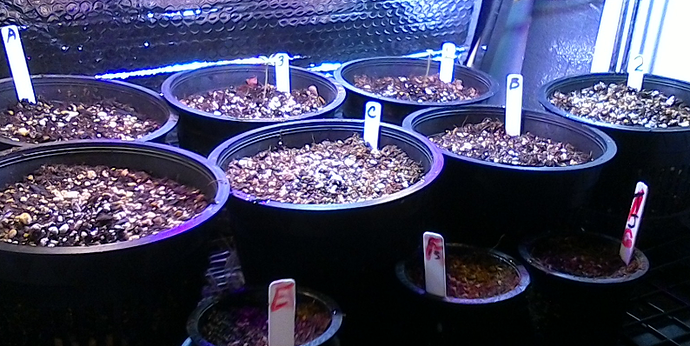 Number 2 popped yesterday and was planted, #4 has not popped.
Though two of the control group popped the day after the New Moon, they haven’t broken ground yet.
This may be the flaw in my experiment.
I used old seed.
8 to 10 years old - refrigerator stored seed.
Even though I doubled the amount of seed in the control group, if none produce viable plants…my original goals will fail.

Good question.
I haven’t seen, from the links I posted, claims of this.
Usually genetic manipulations from radiation such as UV or cosmic rays produce permanent changes, one would think the same would apply to such electrical stimulation.
I plan on testing this in my own small way, so stick around, I’m hoping we all can discover this together.

I belatedly realized that I haven’t shown pics of the completed unit, apologies. 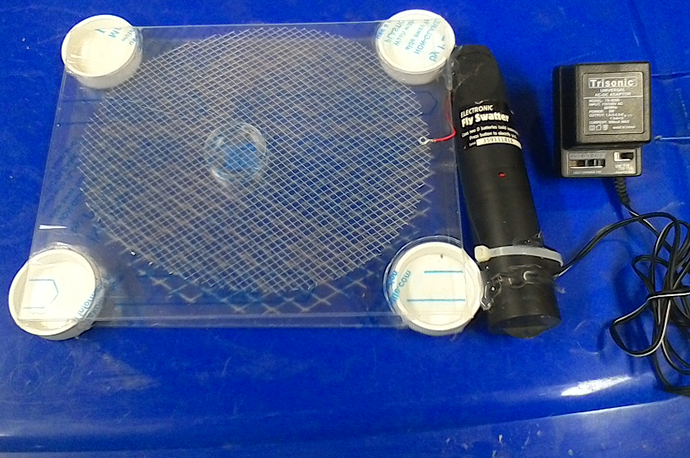 Using spacers the same thickness as a petri dish and a half provides a snug fit. 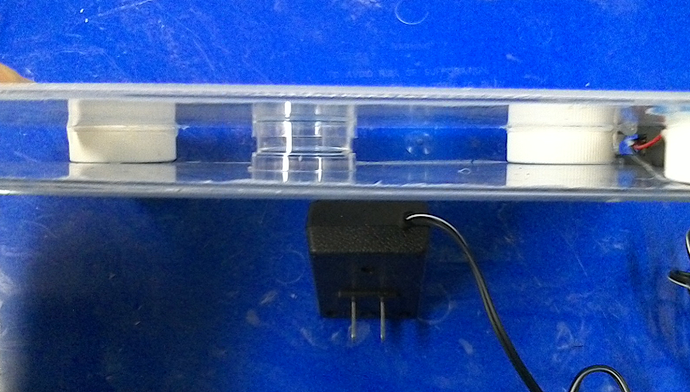 Fascinating experiment! I might have to get one of those EFS for some hi-pressure sprayer experiments I would like to try. Or maybe just to build a small Jacobs Ladder

Ive only just read a tiny bit about the underlying theory, but my first thought would be that this is not really ‘reverting’ the genetics. I dont see how that would be possible with this simple a technique. I suspect that if there is any effect at all, its far more likely it would be caused by the electric field mutating or damaging the DNA - which will have the same effects as radiation. The results will be random rather than regenerative or ‘reverting’.

I am really looking forward to seeing where this goes though. I love this kind of home experimentation!!

Great job on the finish of the unit! Looks clean. All this is over my head but I can’t wait to see the results

Welcome Larry3215 and Hashtree and thanks!

Any way just noticed control group “B” was a 'shroom of some sort.
I poked around and found the seed unchanged, not a good sign. 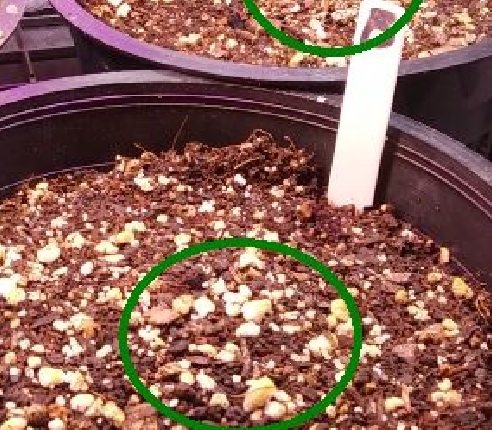 I would be interested in using a Monsanto gmo like terminal wheat seed. The seed is sterile. But if this doo-hick was able to sprout the seed there would be more to go on here…

I really have no idea what this will do, but it’s not like UV or radiation (either energetic particles or photons). UV is damaging because the high energy of the photon is great enough to excite electrons enough to strip them from their orbitals. This causes “free radicals”, especially damaging when things like oxygen lose an electron and now have unpaired electrons left to satisfy. Radiation takes on a number of forms – more energetic photons like gamma rays can produce a similar effect.

The effect of an electric field is usually not nearly this intense. It will “polarize” molecules and cause molecular alignment, but unless the polarization is strong enough to literally start ripping molecules apart (with minor stimulation), it is unlikely to cause damage to the DNA that would result in mutations. If it were this strong, you would probably see a discharge glow and smell ozone.

Mark Burch said in his vid that he didn’t think high voltage was all that necessary, but it has occurred to me cannabis may be too tough a seed for my little unit. After all thc is the worlds best naturally derived UV block.
But my screens are closer together by an 1/8th inch from the recommended gap. An eighth of an inch on this scale is significant.

if its able to damage plant dna i certainly wouldnt want to be around it when the thing is engergized.

lol I used to think those EFS units were a joke but man are they effective!
Summer nights on the patio are fun again as you just swing it in the general direction of the droning bloodsucker.
The tiniest puff of smoke and sometimes a short lived red glow and you are pest free,…until the next hapless critter floats your way.

Payback is a bitch😀 sounds rewarding, I hate those things