A while ago. while having a conversation with Istg8ter, I came up with the wacky idea that perhaps an ultrasonic cleaner could aid in germinating old seed stock.

Basically, an ultrasonic cleaner is a metal tank with a piezoelectric element bonded to it. The element is driven with a high frequency (44KHz) waveform that causes some interesting things to happen in the tank. When you push a few tens of watts of HF energy into that piezo. element you get an energetic standing wave pattern in the tank and more importantly micro-bubbles created by cavitation. 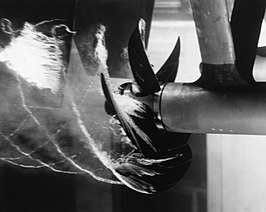 Cavitation is a phenomenon in which rapid changes of pressure in a liquid lead to the formation of small vapor-filled cavities in places where the pressure is relatively low. When subjected to higher pressure, these cavities, called "bubbles" or "voids", collapse and can generate a shock wave that is strong very close to the bubble, but rapidly weakens as it propagates away from the bubble. Cavitation is a significant cause of wear in some engineering contexts. Collapsing voids that implode nea...

These micro-bubbles spontaneously appear and then collapse. You can think of them a tiny depth charges exploding in the tank. Generally, they don’t do much - unless they are very close to an object. In that case they can transfer significant energy (check out the damage in the Wiki link). The idea is that they should help crack the seal on the seed case thus allowing better penetration of the germination fluid bath into the seeds and hopefully improving the seedling viability.

The problem was neither of us had a quantity of old seed to play with. Instg8ter introduces Swe-Can and myself and problem solved!

So, for the Gold Standard (arguably) to compare against: 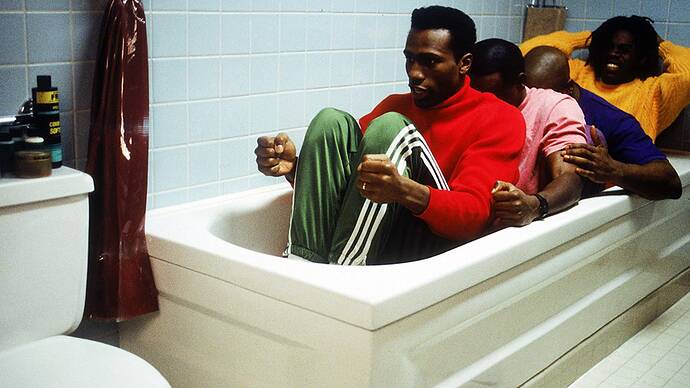 What is the DMSO (

) supposed to do in this context? First time I read that, only knew it from making cream with Sebring’s formula.

Cool show, will definitely watch this.

DMSO/aloe, great pain reliever.
Biologically friendly solvent/penetrant/carrier/pain reliever.
I assume in this case its for softening or some such.
A little worried about seeds insides being smashed by the energy with ultrasonic, prob not the case unless you stick the seeds right up to the emitter.
Try putting a finger next to an ultrasonic transducer, stings.

I have a chair for this show

thanks and it will great

For sure following along with this awesome science.

im in on this. my germ rates on older stock is plummeting this year :o

Great concept and can’t wait to see what results you get.

Interesting experiment! Are you planning on using known low germination stock for this?

After I was gifted 23 seeds of circa 2007 vintage from Swe-can, it was time for the ‘rubber to hit the road’. The ‘gathering of research and materials’ was finally out of the way. So the dilemma was - do I try an untested protocol with these vintage seeds or what?

…A session later and the answer was plain.

I had a few CBD seeds, progeny from a previous run laying about so I ran tests on them.
There is lots more that I won’t bore you with but the TL:DR is:

There is a standing wave pattern established in the tank that causes the seeds to cluster in twos and threes or longer chains. They pull together like little magnets. You can get them to follow your finger tip around the tank and other silly tricks.
Perfect stoner science shit! 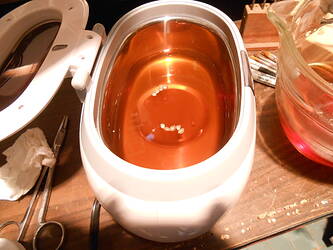 The paper towel for the seed soak was saturated with the ‘Gold standard’ solution. CBD Seeds popped (100%) in about 36Hrs. and placed in the peat pucks. The pucks were soaked in the same solution I hardened them off and planted in 3 Gal pots (recycled dirt). 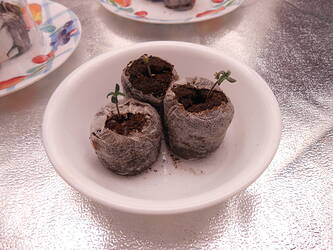 Four of the 23 were initially eliminated, 3 damaged in transit (one black), another had a pinhole in the shell and was black inside (leaving 19).
Seed size ranged from medium small to coconuts. Seed color varied as well. It is apparent we have a range of potential parents here.
A random 9 were selected for the ultrasonic cleaner and the balance went to the ‘control’ group. They took 48 to 72 Hrs to pop {anxiety…}

The results were, we got 5 to sprout from the ultra sonic cleaner and 3 from the control group.
These were transferred to peat pucks soaked with the ‘gold standard’ solution.

Was highly touted on an organic gardening site… with little explanation as to function. Other than older seeds have a tendency to pop and die as their energy storage (the cotyledons) has been depleted. The molasses and B1 are to help with that issue and the DSMO is intended to facilitate transport into the seed.
I discussed this with my kid (Waterloo Biology degree) last week and he immediately dismissed it all as pure ‘bro science’. “Seeds don’t work that way dad…”

The CBD seeds (9 min. of the ultra sonic treatment) 100% germination in 24 ~36Hrs.
The old seeds: 5 popped in 72 Hrs. And were transferred to the peat pucks. All seeds showed noticeable swelling from the soaking process. After 4 days I transferred the rest of the dormant seeds to the pucks – just in case they wake up. 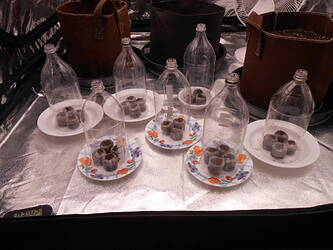 You can see my ‘humidity domes’ these work well with 4 puck clusters. I cut a couple notches out of the base and leave the tops off for some air exchange. I like the peat pucks, the peat resists mold and I have never lost a seedling due to dampening off. A little water needs to be added every couple days to maintain correct humidity.

I ended up collecting 3 stragglers to bring the total to 8 (OK, 7 plus a runt). That is about 40% germination.

Why is there always a runt? 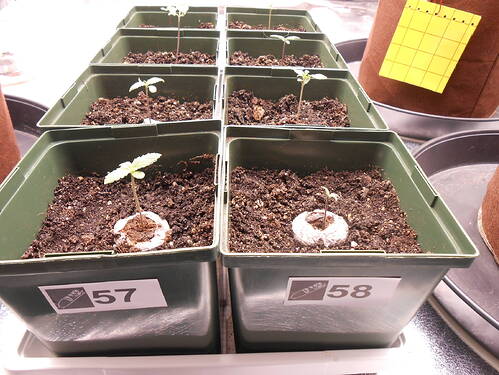 I noticed that all the seedlings including the CBD went into an odd ‘suspended animation’ for a week. No sign of issues but no growth, I haven’t seen that before so I’ll blame the germination solution. After a week of this I dosed them all (8 + 3) with some Dynomyco and that produced results!

I could see a couple had tried to pop and gave up so I was curious what the rest of the ‘duds’ looked like. I pulled apart the pucks and had a closer look.

2 were black inside, 1 was immature, 4 popped and died. There were 4 that looked good inside, absorbed fluid but stayed dormant. 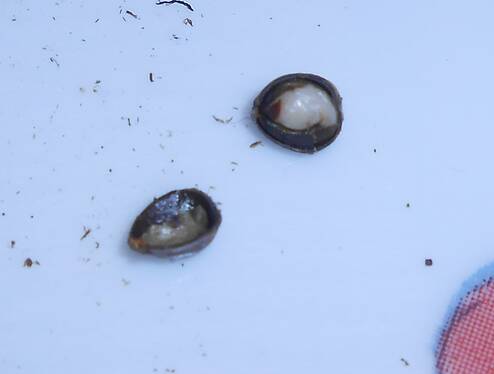 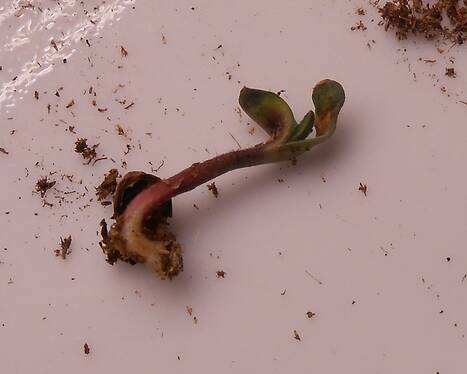 The ultra sonic treatment looks like it has potential, a few more runs should give enough data to decide if it is neutral or has positive benefits.
That germination solution needs work. Molasses promotes mold on the pucks. I’m thinking distilled water, H2O2 only next time and inoculating with myco as soon as possible.

Achieving 40% germination with 13 year old seeds is impressive but I attribute that to how well Swe-can took care of these seeds.

This is cool! We need a big batch of old seeds that have really low germination rates…

In case you need it, the attached pdf explains how to germinate cannabis seeds in vitro. It is very useful with old seeds. In this way they have more days to develop without pathogen problems. Have you looked inside the shell? is there something inside c1850-info_1.pdf (524.7 KB) [IMG_0019 as Smart Object-1] [IMG_2178-as-Smart-Object-1]


Check out the PDF

So now we fire up the old DeLorean, pop a banana peel into the Mr. Fusion canister… and… 1.21 Gigawatts later… 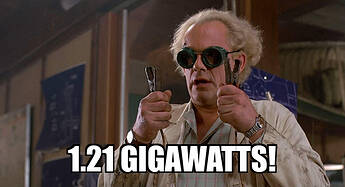 We are Good to Go for a quick trip back in time to circa 2007, when Swe-Can gathered seeds from from all over the island of Jamaica.

Hi everyone! I got a lot of seeds from my travelings abroad. From jamaica all the way to cambodia. Its never hard to bring seeds with you from fine weed countries but clones from good breeders are a bit harder… specielly from u.s.a and canada… thats why i want to exhange seeds for clones… Some im looking for is Amnesia Cheese Wifi Gdp And more… I know you wonderful growers out there got alot of good gear. Only one problem thou… I live in a country where growing and everything with wee…

So, Brother and Sister Stoners… what are we going to do with the progeny of part One?
Yup, you guessed it… Preservation seed run!! {the practical training exercise}

After digesting Marijuana Botany by Robert Clarke I realized that the text could be a great teaching exercise (primarily for me!) This is an excellent and very readable text, I recommend it to everyone interested in cannabis propagation.

I would be totally remiss if I didn’t reference a great thread by @Sebring that popped up on my radar this summer. Great read!

Cannabis crosses are not F1s, so says science!

As this is my first pass at just about everything… - please, pile on if I’m heading off into the weeds,
I sure need the help!

While the seedlings are in Veg, I will clone all of the plants to preserve the parental lines. These clones will become bonsai mothers/fathers and will be kept in vegetative state.
With the developed seedlings, I will do controlled and documented crosses between the males and females. The aim being to get a good volume of seeds with reasonably even and traceable genetic representation. A portion of these seeds will be reserved and the balance distributed to any folks that are interested. More on this later (see seed distribution in Part two continued).

Like an old K-tel knife commercial, “but wait! - there’s more!

What about those clones you ask? Now, I’ll grow those out to see what the parental stock looks like and quantify and document them. OK, and most importantly, smoke them too.

So where does this leave us?

Well, that’s enough to chew on for one sitting…

Time to meet the gang…

{…and just wait for the next installment…}

The 8 seedlings landing in their new pots 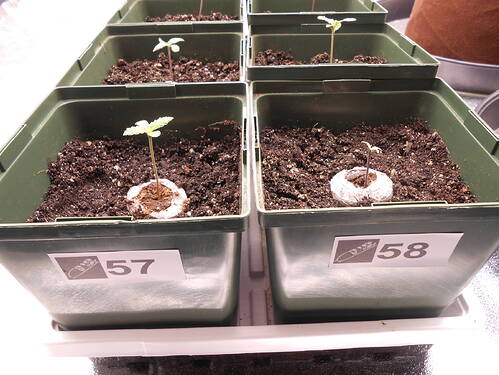 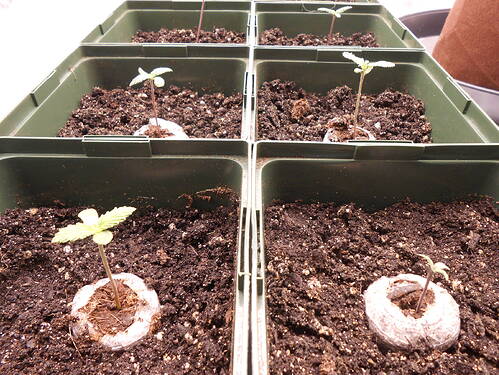 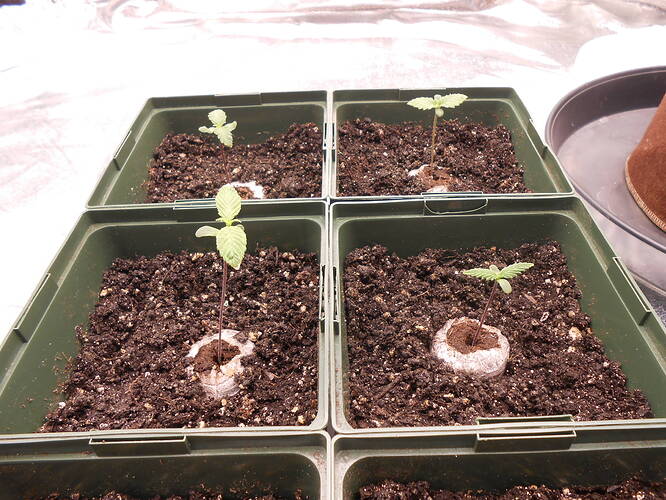 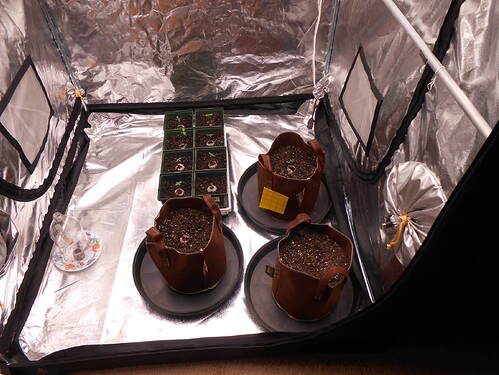 The 3 Gal pots are the test CBD. 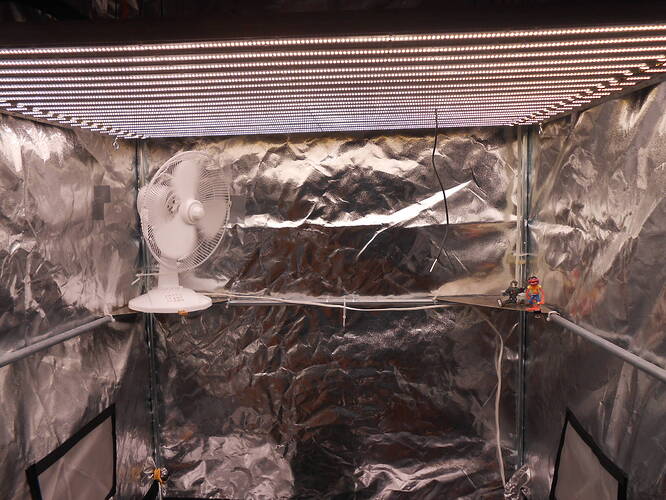 Looks like a great project Gpaw, the hard bit is over, you got the seeds cracked

I just saw this small detail !! I love it 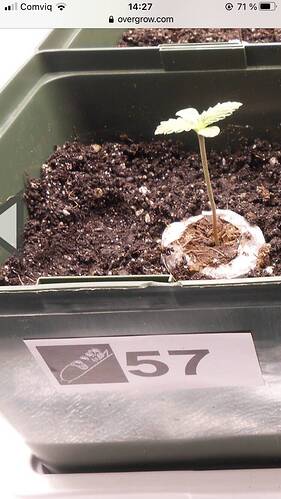 Great write up and details.