Cannabis crosses are not F1s, so says science! 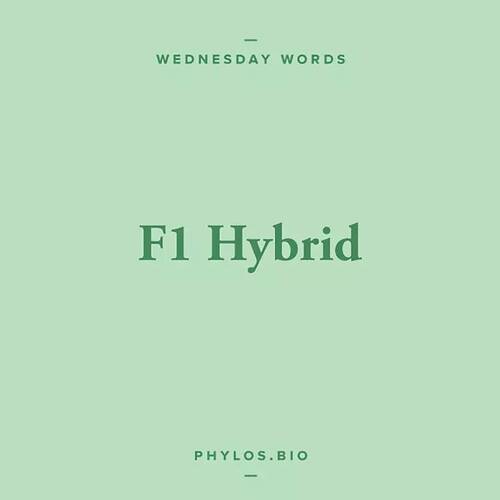 FB_IMG_1527788127365.jpg720×720 9.39 KB
Phylos Bioscience:
Currently the way the cannabis industry uses the term F1 hybrid is wrong. An F1 hybrid (or filial 1 hybrid) is the first filial generation of offspring of distinctly different parental inbred types. Cross-pollination involving two true-breeding, or homozygous, parents, result in an F1 generation that are homozygous and consistent in seed form. There are very few, if any, true F1 hybrids in cannabis because every modern variety is heterozygous (highly variable). The Phylos genotype test can detect the level of homozygosity or “true breeding” status in a particular genotype. So far there are no completely homozygous varieties out of the thousands of unique genotypes we have tested on the galaxy. Who will be the first to develop two individual and distinct homozygous varieties and cross breed them in cannabis has yet to be seen.
Original post was from Their IG & FB pages.

My proposal, which is up for discussion, is as follows. 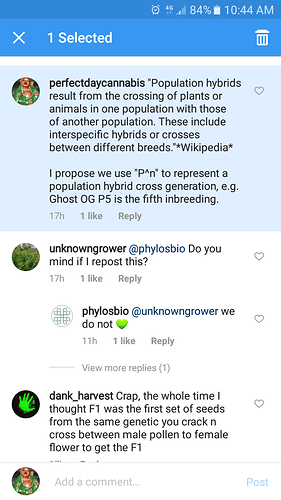 I’d love to see alternative proposals!
One that was offered was “LB1” to designate line bred, although I believe that “P” still makes more sense as it can stand for polyhybrid or population hybrid, both are accurate for what is being done. “H” is another, probably better, option with it standing for hybrid in regard to cannabis breeding. 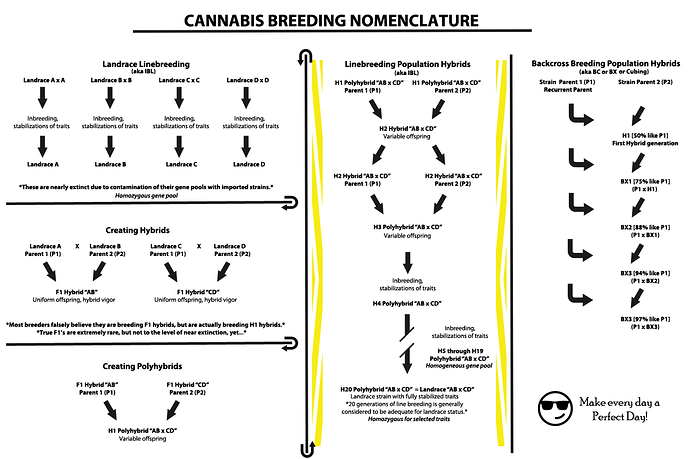 Based on the fact that they(phylos) haven’t found complete homozygosity at the genetic level, in the varieties they’ve tested?

If you tested all Sumatran tigers for example, of course they would not be completely homozygous at the genetic level. Does that make them a polyhybrid species?

I’ve grow more than a handfull of varieties that displayed homozygosity in actual practical experimentation. So I find these claims confusing.

Homozygous in this sense applies to the limited variability of the tiger population’s genetic pool when compared to the genetic pool of leopards. They are capable of breeding together, but are distinct, as are their hybrid offspring, which would be distinct compared to either parent. To have a polyhybrid you’d need to breed the tiger-leopard to a lion-cougar.

Appearing homogeneous doesn’t qualify it as a homozygous gene pool, testing of it’s DNA would be required. Without DNA testing, you’d need to run thousands of seeds with no noticeable variations. If two phenos exist for a line, even if they’re just slightly different then it’s not homozygous.

^Edited to be accurate^
Homogeneous is used to describe a kind of mixture which is uniform in composition. Whereas homozygous is a term used to describe the genotype of a organism in case of a particular gene, when that organism has identical or same alleles(or copies) of the gene present on both(for diploid) or more (for polyploid) homologous chromosomes.

So I’m way over my head.
I had no idea the basis to qualify as a homozygous plant cultivar was so strict.

As it is now, all the original parent genetics for modern strains have either been contaminated with imported non pure hybrid strains or they went extinct in the last 100 years.
It’s still possible to create homozygous strains, but it requires 20 generations of inbreeding, which no one is really doing, or if they have they’ve never submitted it for testing. All of the well known, or purchaseable strains have been tested and only 4 were even close.

strains have been tested and only 4 were even close.

Well I gotta know…which were they?

Beat me to it.

I need your answer as well, because the phylos galaxy does not work on my cell. The anticipation is already killing me!

With legalization a lot of terms and wives tales will fall apart.
There’s a study currently showing that there aren’t that many varieties of cannabis, that slightly contradicts the dozens of ig hype artists claims of having an orange dreamscicle or whatever.
when it’s really just expressing some heavy limonene in 1out of 10 plants or seeds popped.
From my work with tomatoes it doesn’t necessarily take 22 generations to get a definitive true breeding variety. It mostly depends on what traits your trying to isolate and their rarity in the gene pool, as well as dominant and recessive interaction.
On the flip side, a rare trait occuring recessively could take a hundred generations to tag down.

I’m still searching for the other ones, and I emailed phylos to see if they would reveal more.

On a side note, homozygous doesn’t have to occur for every single gene in the plant, it just has to be homozygous for the traits you are breeding for, but it does mean that the specific trait you are targeting be identical across for all associated diploid genes.

@Scissor-Hanz, I’m a biologist and I know how to explain most things in a way you’ll understand and you’ll probably learn some genetics in the process!

The basis of all of this is the individual chromosomes. Cannabis has 20 chromosomes paired off to make 10 pairs, including the sex chromosome of either XX or XY, which when combined makes up the entire genetic code for the plant. Alleles are the areas on a chromosome that have genes coding for a specific trait. The same gene code across an allele make the plant homozygous for that trait, and if the gene code is different it’s heterozygous.

At the level of genetics that most cannabis breeders work at the most they can determine is if a population of plants is homogeneous, or uniform in it’s phenotypes for a trait. Uniformity only requires that the population be very similar.

I am glad I have my likes back.

Anytime you want to carry on about it, I’ll follow along.

So Essentially what your saying is the first offspring from the inital cross are a P1 until they are crossed to make an F1 ?
EXAMPLE :

Jawa Pie x Jawa Pie = Jawa Pie F1 Correct use of the F1 ? and son on and so forth
JawaPie F1 x Jawa Pie F1 = Jawa Pie F2 and would continue on ?
This is a real strain from Ocean Grown genetics just as an example Called Malibu Pie , 2 F1 Pheno’s of the Jawa pie mixed , One that was very disctint that the breeder liked the Dubbed the “Maibu”

So Essentially what your saying is the first offspring from the inital cross are a P1 until they are crossed to make an F1 ?
EXAMPLE :

It would actually be:
Key Lime Pie x Alien Rift = Jawa Pie , An inital Cross is a “P1”

*Keeping in mind that “P” is just my proposal. Which I’m actually thinking about changing, because some geneticists use “P” to designate the parent plant. Maybe “H” would be better, as I can’t think of anything in genetics that uses just “H” as a designation. H could stand for Hybrid

Uniformity only requires that the population be very similar.

Oh excellent, I appreciate it much. Very lucky to have you here. I’ll probably be bombarding you with questions from now on. I completely follow you, thank you for your explanation

My confusion is that observation of uniformity seems to be effective enough to inbreed lines capable of showing f-1 hybrid vigor in their progeny, without going to f-20 and beyond and then confirming through a geneticist?

…I’m wrong to assume there is room for slight genetic variation within a population?

-Thanks for the reply, and I appreciate the skillful use of layman’s terms for us dopers.

The one thing I know to be true is that cannabis growers and breeders are going to have their breeding work fully integrated into and recognized by the traditional academics. So far the academics have let growers have their own domain and have allowed growers to set their own rules. The two worlds are going to either collide or gently merge, If we, the growers and breeders, have already evolved our definitions to allow them to merge then everything will be better for us. If we refuse to merge then the collision will be bad for us, as we’d be facing down hundreds of years of scientists and every text book about genetics on the planet. 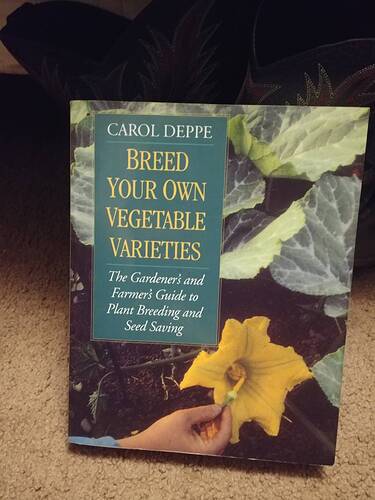