At this point, I think that anyone who is growing Seed Junky’s beans is doing the community a service by telling us your experience. It’s becoming more and more apparent that Seed Junky is releasing a number of strains that have a high proclivity to hermie - and for a breeder that sells some of their strains for well over $500/pack, this is very wrong.

Worth noting, Seed Junky is one of the very few breeders that will never replace any of their seeds for any reason… Perhaps their name should be Junky Seed Genetics, amiright?!

Spoiler Alert: I’m a little over 2 weeks into 12/12 with 8 out of 11 of the seeds I germinated, so I already know the answer to the subject title, as do those that I’ve been sharing this grow with in a PM. If you already know…

OK, to get started, this is the pack: 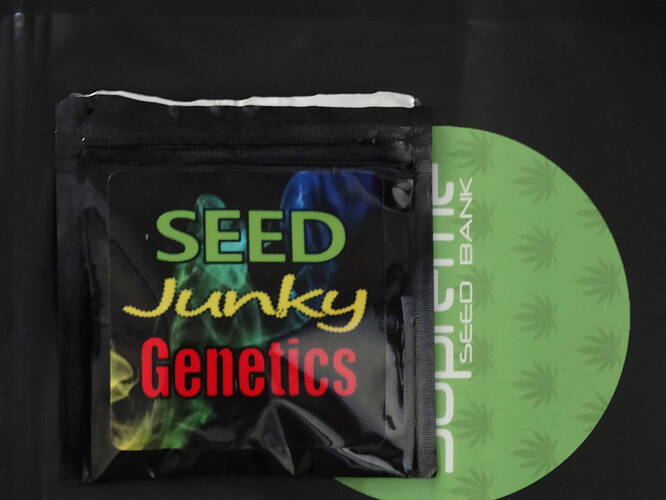 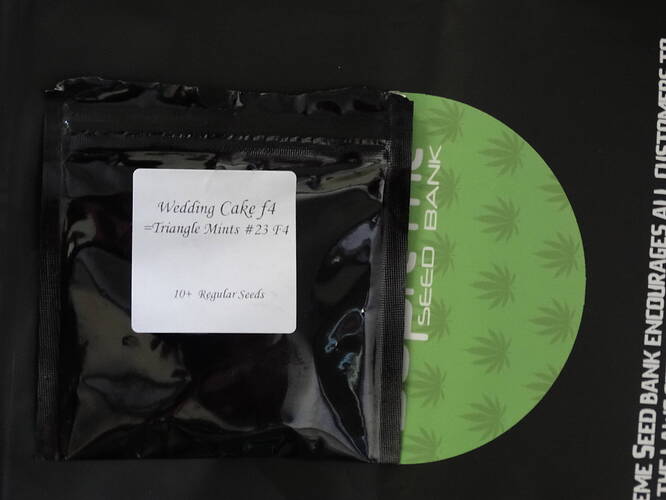 The seeds were not very impressive. They were smallish and light colored, but this should go to show you that size and color doesn’t always indicate viability.

As I often do, I started them in paper towels using my vertical hanging method… 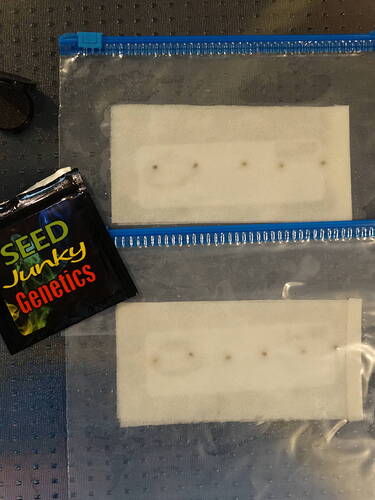 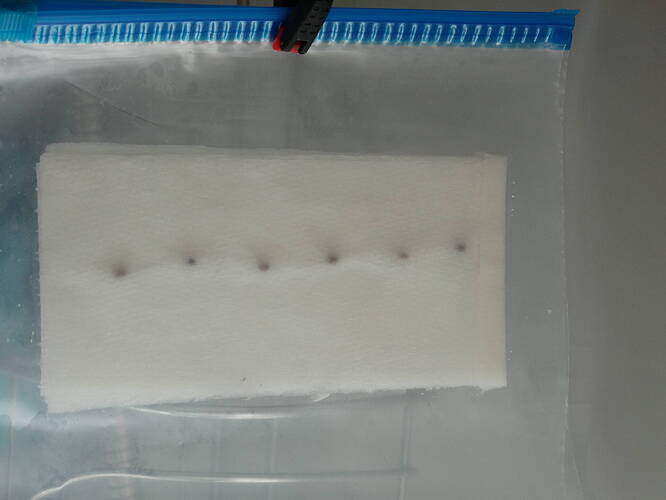 48 hours after placing them in the paper towels, we have activity with most of the beans: 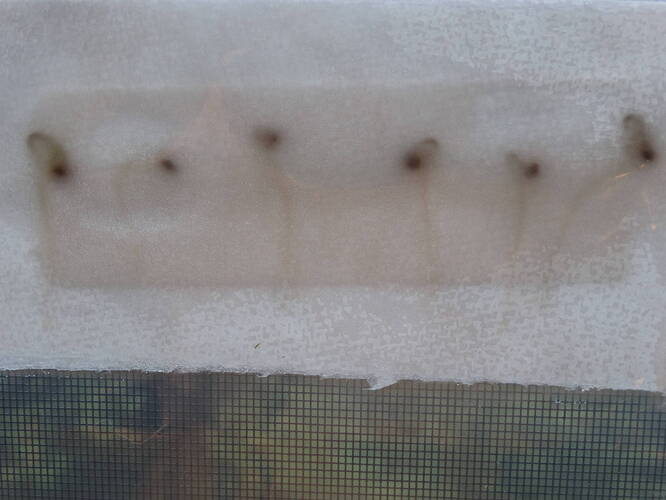 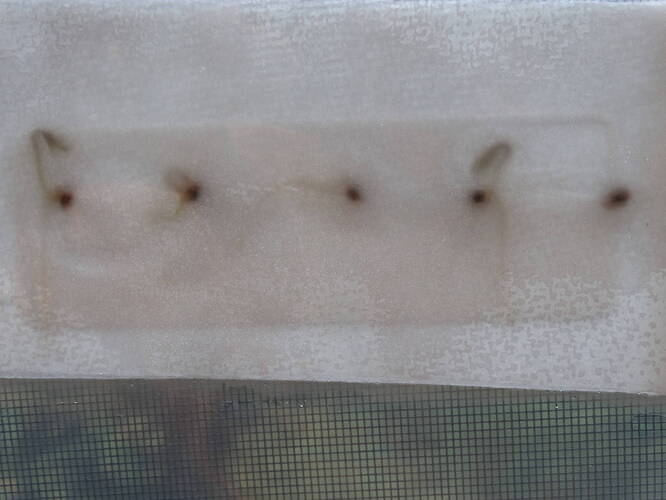 And here they are 72 hours after hitting the paper towels: 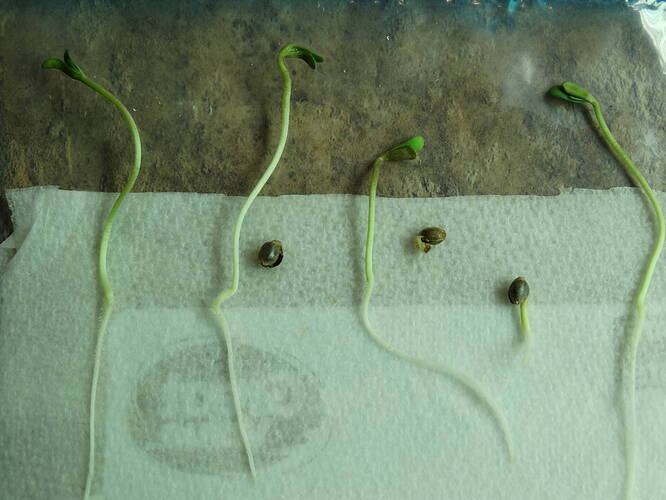 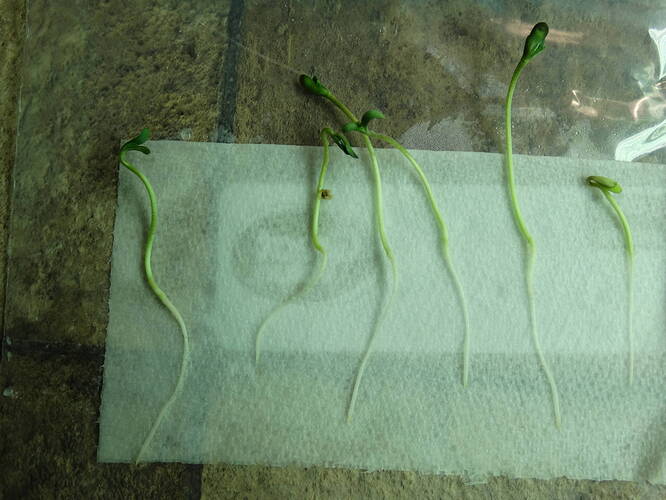 11 of 11 germinated. The 2 shortest ones caught up rather quickly, which I’ll show you below, but here are the biggest 9 (still 72 hours after hitting the paper towels)… 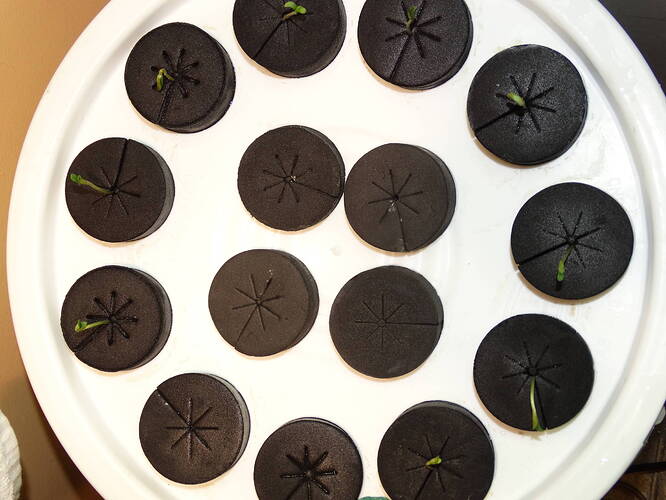 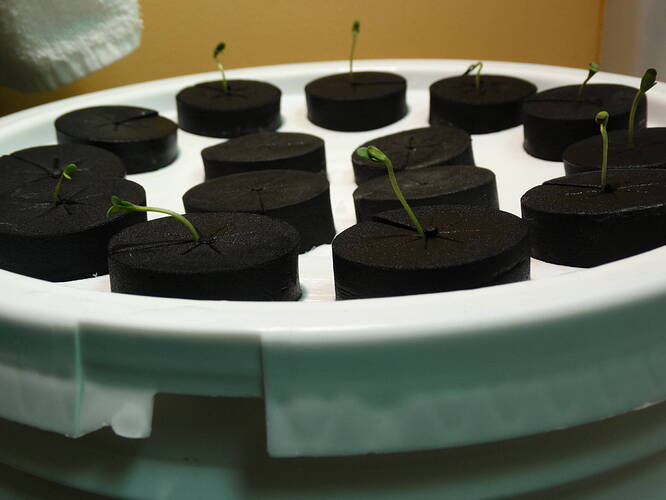 And here’s all 11 - less than 5 full days after hitting the paper towels: 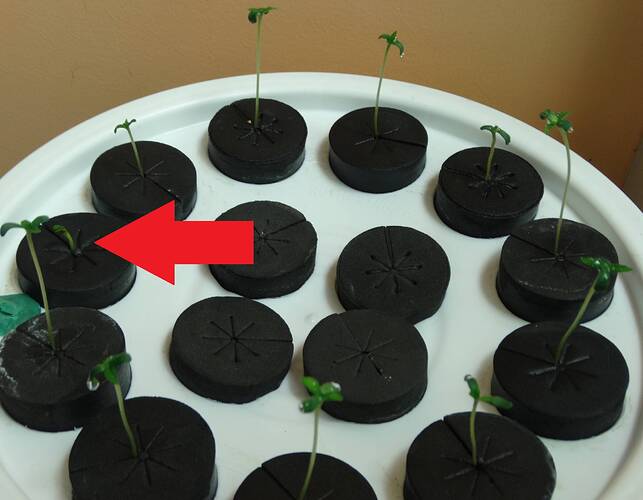 That arrow points to the last one to germinate, and it was also the last one to be placed into my cloning/seedling bucket. I point to it so you can see how it progresses when compared to the others, which all appeared to be more vigorous from the start.

Good to see your bucket working, what lighting are you using?

And do you keep the dome on?

what lighting are you using?

The light I keep directly above the cloning bucket is simply a 14W LED flood light with a small reflector. The room where it sits also has a 6 tube T5 running, so there’s additional ambient light in the room.

do you keep the dome on?

Yes, until the seedlings or clones have well-established roots. I keep a large oscillating fan, along with an exhaust fan, running at all times, so I need to protect the young ones until they can survive the wind.

I really like the way you start your seedlings vertical like that and go right into the neoprene pucks.

Id love to completely ditch the clay balls im using and just do what your doing.

Id love to completely ditch the clay balls im using and just do what your doing.

Contrary to popular opinion, we don’t need to start seedlings in the dark. The photo where you see part of the plastic clamp holding the 2 ziplocks was taken while they’re hanging next to the 6 lamp T5 I mentioned. That light gets plenty warm, and the heat that radiates from it, even from the side, is plenty (obviously). In the cold winter months, I can hang the bag above the T5 fixture, where it will be a bit warmer than the side.

Won’t replace seeds for any reason?

Haha…I understand your questions. Unfortunately, a number of us were unaware of the hermie issues with Seed Junky when those seeds were purchased. I found out about it after another run here on OG turned to sh!t after a high number of the plants turned hermie (with 2 separate and skilled growers). Most of us thought the policy for not replacing seeds for any reason was more due to delivery issues, which is why extra was spent for tracking.

As for paying for shipping, that’s rather common for seed banks to charge for shipping; that’s not on the breeder.

Paying for shipping is normal but paying 550 for a dozen seeds is insanity. Adding shipping on top of that is the most savage thing I’ve heard a seed bank do in a while lol

If you get anything less than Cannabis Cup material from that lot you got taken advantage of, massively.

Where did you order them? The Seed Junkie website doesn’t list anything for sale. I’m trying to see what these seeds are all about

…paying 550 for a dozen seeds is insanity…If you get anything less than Cannabis Cup material from that lot you got taken advantage of, massively.

I’m trying to see what these seeds are all about

You can see the pack…should be fairly easy to Google.

For whatever reason, ppl slept on your GSC MC thread. Hope this one gets you more recognition✌🏻

If they don’t turn out, let me know, I’m happy to send you some seeds for free!

Hope it all works out for you !!

Here they are exactly one week later. See the runt? No longer the runt, is it?! 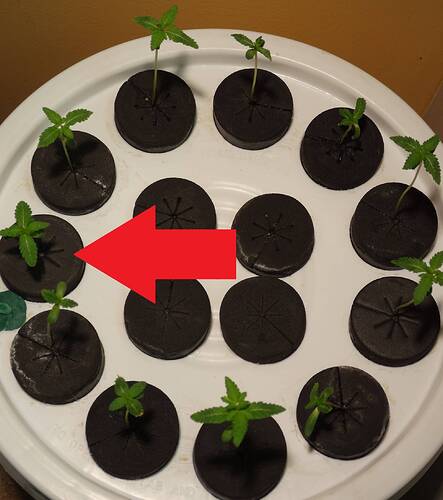 Another week later, and that runt looks like it’s really enjoying its environment… 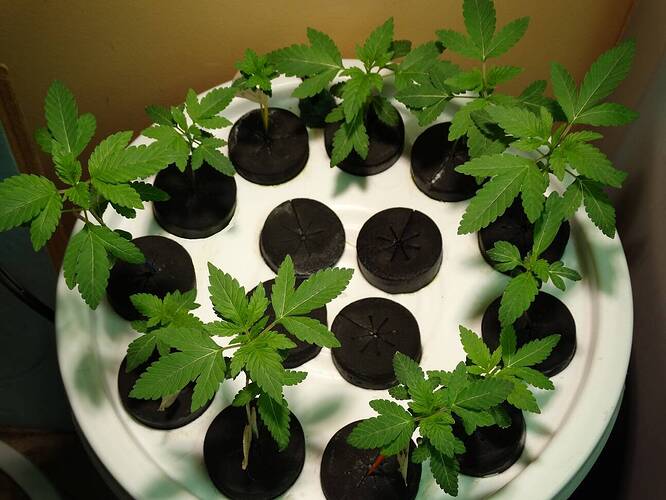 And only 2 days later, this is what we have… 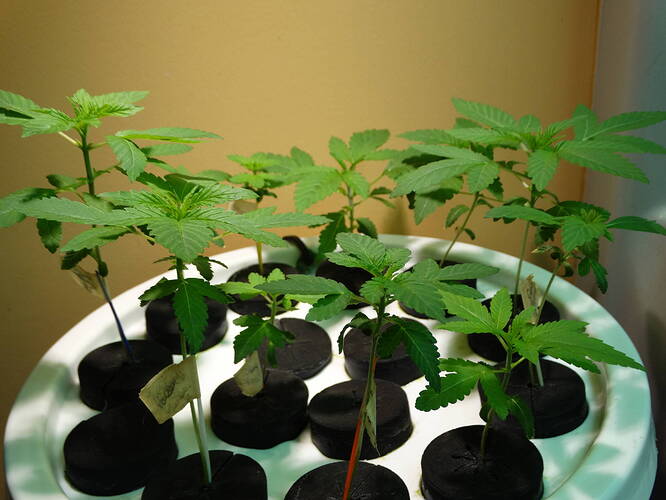 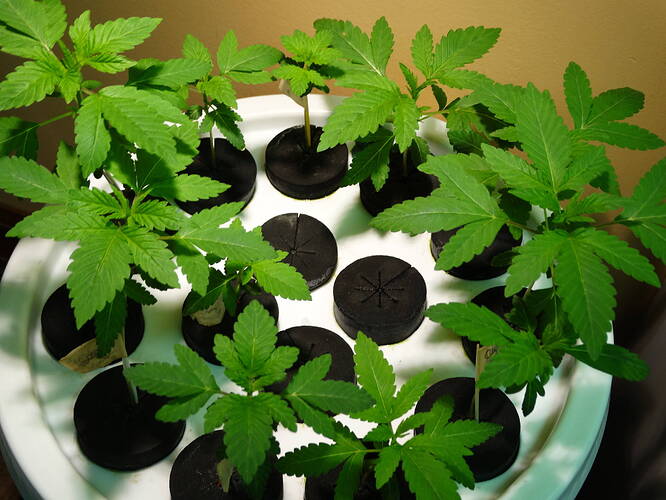 They’re doing well, so I adjusted their nutes and moved them into the new cloning/seedling bucket I just built.

Here they are 3 days later: 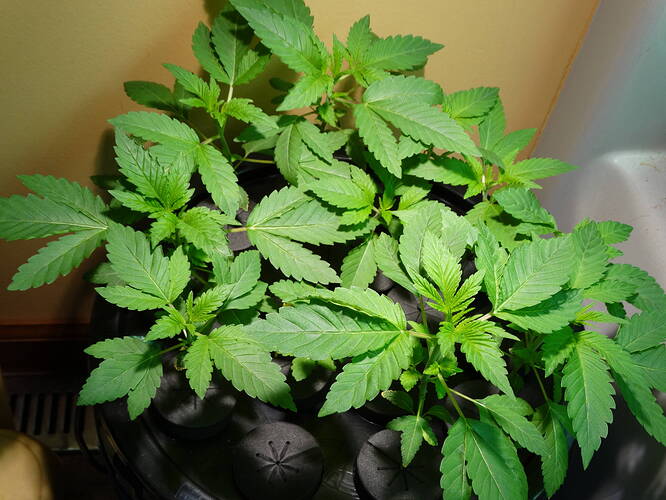 For whatever reason, ppl slept on your GSC MC thread. Hope this one gets you more recognition

lol…it’s true, that thread was a dud. As for me getting recognition, that’s not at all my objective. I do want to educate about Seed Junky, good or bad. If I was looking for recognition, I’d probably post more bud pics and do more giveaways

. Still, thanks for your support, @TreeTops!

Haha maybe visibility would be better. I dunno man! You know what I mean

You know what I mean

Yes, I think so. Perhaps engagement is the best metric to know if people care what’s being posted. Like with this thread, I started the Mega Crop grow show thread to educate, but you can only lead a horse to water - it’s up to the horse to drink.

Who cares about visibility when you can grow the

Shortly after I took the last pic I posted of the plants in their new bucket, I moved them into their new home. So this photo was taken less than 2 hours later… 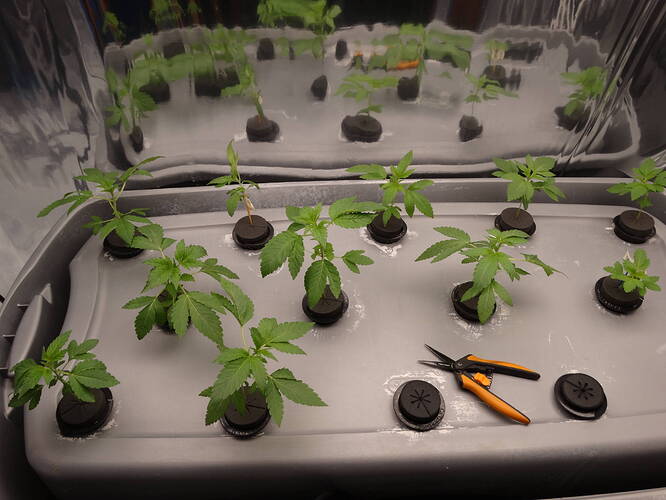 At this point, they have their own light and more space. You can see the growth only 1 day later… 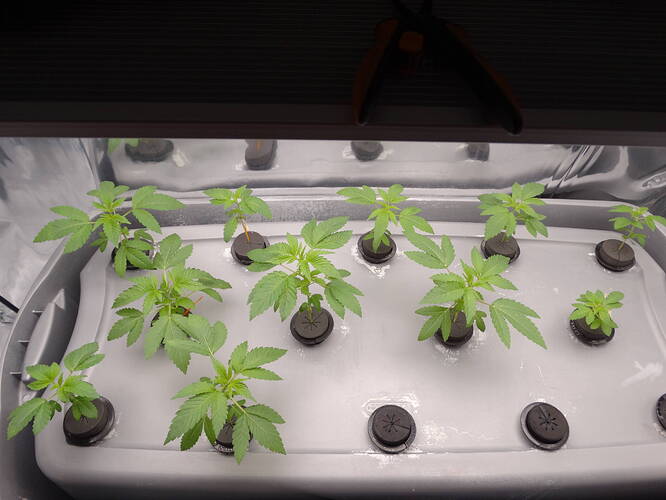 They were growing pretty quickly, so I had to move them around to give each of them a little more space. Here they are 5 days after the previous pic: 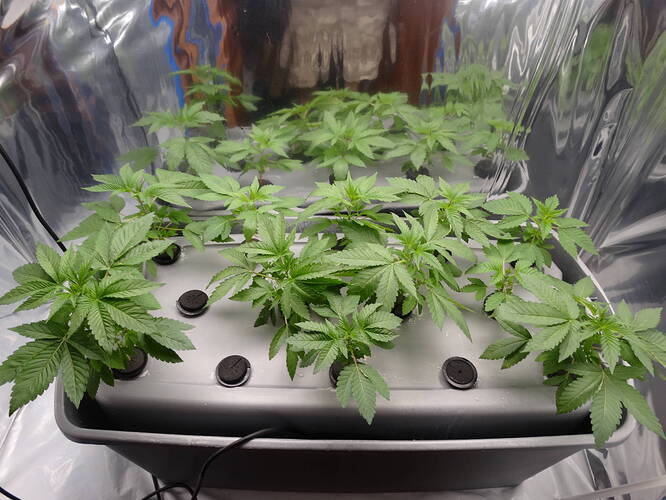 And 3 days after that: 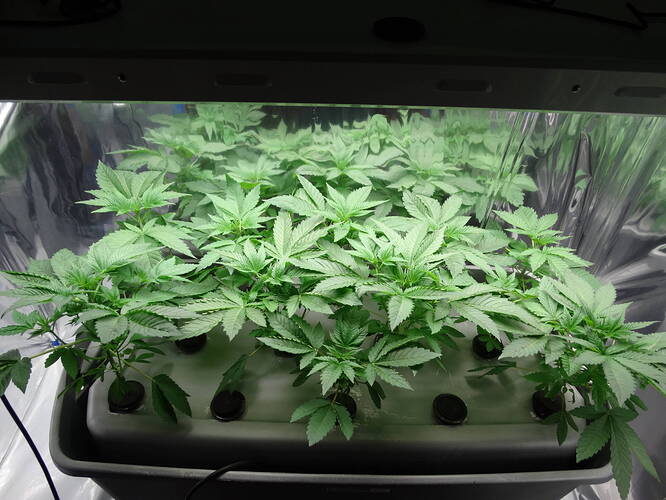 And here they are, another 3 days after the previous pic. This is the last pic of them in their overcrowded tub. 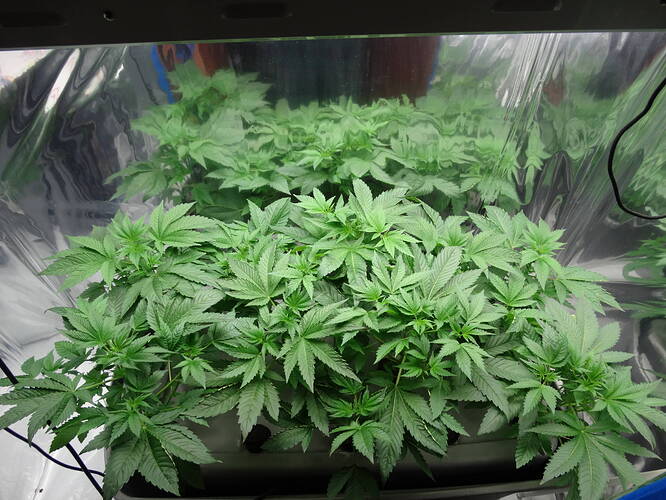