Johnnypotseed’s 3-ring circus - with autos, photos & sex…reversals, that is! (Part 1)

Well hell, I’m still in the process of gingerly tiptoeing into the 21st century here, so y’all bear with me! I might be just an old dinosaur, but I’m not so thickheaded that I can’t see the writing on the wall!
Like Many growers before me, my thought on ‘autos’ was kinda like 'yeah, big deal, so what? I don’t think so, not in MY grows;! There were quite a few reasons I didn’t wanna touch them… the fact that I couldn’t clone them, or let them grow for 4-6 months before I budded em out, then there’s the idea they came from breeding ruderalis with, which lowered the potency.
Now, just over 10 yrs have gone by since the first auto (Lowryder by Neville) and Autoflowering plants have gotten a hell of a lot better! As potent, or more-so, than some photoperiod strains, and much more yield for indoor growers.
They have grown so popular that almost every site you can buy seeds from have them, and growers, both private/personal as well as commercial, are grabbing them up.
All that said, I have been getting my hands on a good bit of autos here lately. I have seen the grow logs of many folks on here, as well as online. I don’t have to get my nose rubbed in it to make a believer of me!
So here is my very first attempt at growing the (now famous and popular) autoflowering strains!
I did a lot of research as to the methods since they are somewhat different than the way I’m used to. Hell, lol a LOT different!
I’ll be posting pics of this project as it progresses, so hang out, smoke a fatty, and comment whenever you feel the need, good people of the OG community!

First up is the 2&1/2 gallon pots I put these into after germinating. This will be the only pot they grow in until harvest. Temps in the room are 72F, humidity is 55%. Lighting is 600w HPS 20 hours on, 4 hours off.
I’ve added root stimulator, as well as Trichoderma and Mycorrhizae.
There are 12 Snowryder and 4 Pink Panama for this ‘experiment’ 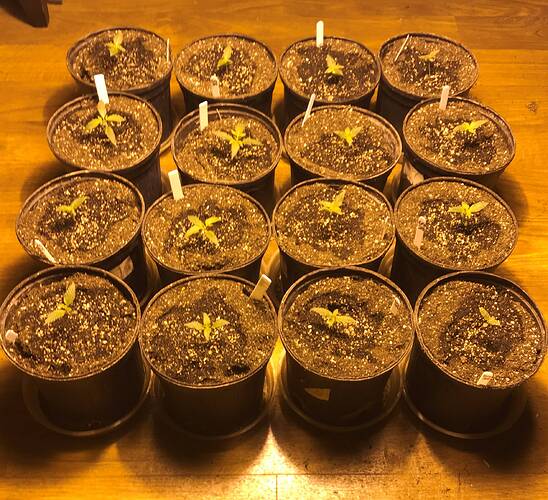 Nothing in moderation huh?

You have about as many plants in that one picture as I’ve ever grown! Man they need to legalize growing here already!

for me this IS ‘moderation’ lol

I am outa likes right now, owe you one, only ran autos one run, I am a control freak and couldn’t stand that i dont control the flowering time, then they grew out ok but just seemed weak and they were called NL but way different tastes and smells then what I am used to as being NL.

That said Ill be here, changing the watch this thread priority to higher right now

Yeah, B-U-D-D-Y!!! Since Autos “shouldn’t” be a long ride, gonna hang out in that far right corner. Hit that “Auto Pilot Button” and let 'er rip, Bro. You’ll be just as successful as a Regular grow session. SS/BW…mister

“I ain’t afraid of no ghost”…er, I mean strain lol

I love me a good auto run. Are those Snowryder from Mark on Strainly?

I got them in a trade here on OG, don’t remember if they’re Mark’s or not

This looks like it’s gonna be a great show! I’m gonna enjoy tagging along to this.

After I ‘fine-tune’ this new (for me) growing method, I’ll be dropping a much larger batch (50-60) for the commercial end… we’ll see how that goes lol
edit… and they WILL be from Mark!

Like Many growers before me, my thought on ‘autos’ was kinda like 'yeah, big deal, so what? I don’t think so, not in MY grows;!

Yup… That was me last year. Thought of them along the lines of wind up chattering teeth. Crank them up and off they go

SmknCanuck shattered some myths with his Auto training 101, worth checking out if you are interested in LST.

I’m tagging along - with interest!

That’s an interesting read, thnx @Gpaw… I’ve read most of the stuff he said before I ever started this. I’ll be using a bit different method of LST, but I know not to do any fim or topping etc. I DID do some homework on autos since they’re so much different from what I’m used to. Wanted to minimize any mistakes! Especially as this is probably going to become the main thing I grow for the commercial end. I’m still going to keep all my other strains going also, but won’t be putting as many of them into flower any time soon.

edit…I will probably do as he did in the beginning, as well. The paperclip is a good idea lol I was going to use sissel string

I do not know if its a true thing but my auto grow they seemed to be afraid of nutes. Cut way back from the regs i run

I’m not going to be using much nutes … period. Mainly the Trichoderma and Mycorrhizae. And once they into the flowering stage, some bloom fuel.

I suppose some day I should retry autos, when I ran them i was alone and on my own other then what it said on the seed pack, just like my first sexaul xp I was kinda afraid and all alone

There is one thing, though. I probably won’t be tying down an pruning quite as much as he did… it’s a lot easier to take time for all of that when you have just 1, 2, or a few plants. But when you’re into a large commercial batch, like I’ll be soon, it’ll be some of that to get a few good top colas. With some some LST of the lower branches, and a bit of leaf trimming. I have about 6-700 plants to tend daily lol Not enough time to give that many that kinda love!

wowsers would love to be able to run that many without fear of incarceration, I havent had a real good buzz in a long time, with those numbers the search for the "one " would be alot shorter. But i dont envy the work, dont even know if i could given all my injuries and what not.

Since they started legalizing one dream i have had would be to work with a master grower that knew his stuff, lol even tried half assed, but my age and being handicapped i think drove them off, it turned out ok though, Because my dispensary sells their stuff, and have not had any of theirs yet that comes close to mine.

Well, we are a state licensed grower here in Oklahoma. So that amount is nothing to what some of the commercial growers have going! lol We’re what is called a ‘mom-n-pop’ op. Doing small batch, top shelf, organic no corporation or partners, just the family…
edit… my list of ailments reads like a book… lol but I don’t take any meds other than my marijuana, watching my diet, and what bit of exercise I can manage.

a P.S. but really believe it should just be legalized