Agreed. I raised $$ for server fund and check in every day. No reason to drop bavk to level 2 after already being 3

I became tl3(regular) and then took a hiatus for a few months and only dropped down to tl2(member). I think you only loose tl3 status from not being active.

I gotta say I really like these idea’s. I haven’t lost my Regular badge since I got it, I’m here all the time

but this makes a bit more sense to me. You work to get the badge, and the Read-Post requirement is a flat number that is easily within reach of an active user here. As it stands, as the site grows, that number being a flat percentage requirement(25%) will eventually get to a literally unreadable number of posts assuming you aren’t just scrolling past all of them anyways. Eventually you wouldn’t even be able to do that either.

edit: How difficult would it be to give people with the regular badge access to that 100 days stat summary? It’d be great to be able to easily see where you stand without having to hassle you or the other mods.

And then having this would make it way more easy to know how you’re doing in direct relation to the TL system. I would just say, show these stats only as an addition to the all-time stats we already have, wouldn’t want to lose those to only see the 100 day ones.

Anyways, that’s all I got

Lol they still have a couple but OZ in clearwater was always nice met my ex wife there 15 years ago. Lol

@LemonadeJoe what is " regular emeritus" I just got that today, but I swear I was already level 3/regular

Some community activities are based on trust and therefore we have put forum trust levels in use (see Explaining user trust levels and permissions) Especially the distinction between Member and Regular is the line that can put you in priority queue for seed-run, etc. That is why it is important to know how to reach the status (see here). What you need to be aware of is that Regular status can be lost when you stop being active in the forums and no longer meet the criteria. That can pose a prob…

Hmm i see lol. Thanks

Am I able to start a journal and post pics?
I have some cool projects I would like to share as well
Thanks for your time!
GROWTHRULIFE

Am I able to start a journal and post pics?

Sure, you can start a topic in #indoor-growing:growroom-diaries immediately…

Is the level you are the little green dots under the name?

Nope, that is your “reputation”, you get more green pips when you get more likes, your level appears in your profile … 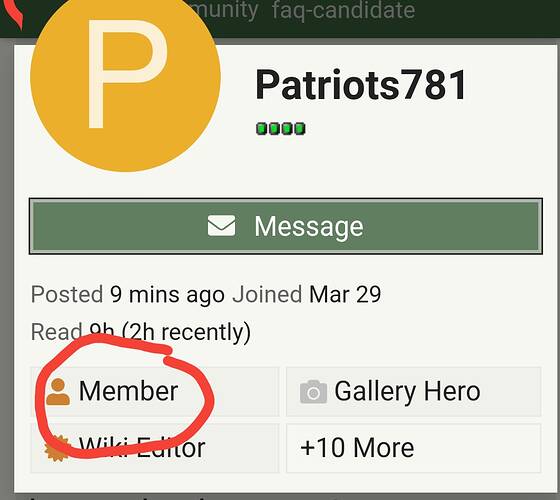 So i recently hit member… Thank you for the upgrade i love this community everyone is amazing
But how do i get the little title under the badge squares? Seriously im confused

how do i get the little title under the badge squares? Seriously im confused

Click on your profile.
Under your name/avatar and green pips, you will see a number of different links associated with your account. On the very right, you should see the little gear icon next to “Preferences”.
Click on Preferences.
About halfway down the page, you will see “Two Factor Authentication”, and under that, you’ll see “Title”, and below it, a drop down menu.
Click on the drop down menu below “Title” to see your current choices.
If you sign up to donate monthly via Patreon, you can create your own. Perhaps there are other ways, I don’t know. Otherwise, as you surpass milestones on overgrow, new titles will be made available to you.

You have some badges yet to choose from, does this option appear in your profile? 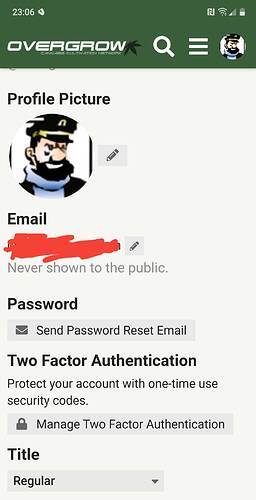 Maybe ill just start donating to set it to something custom